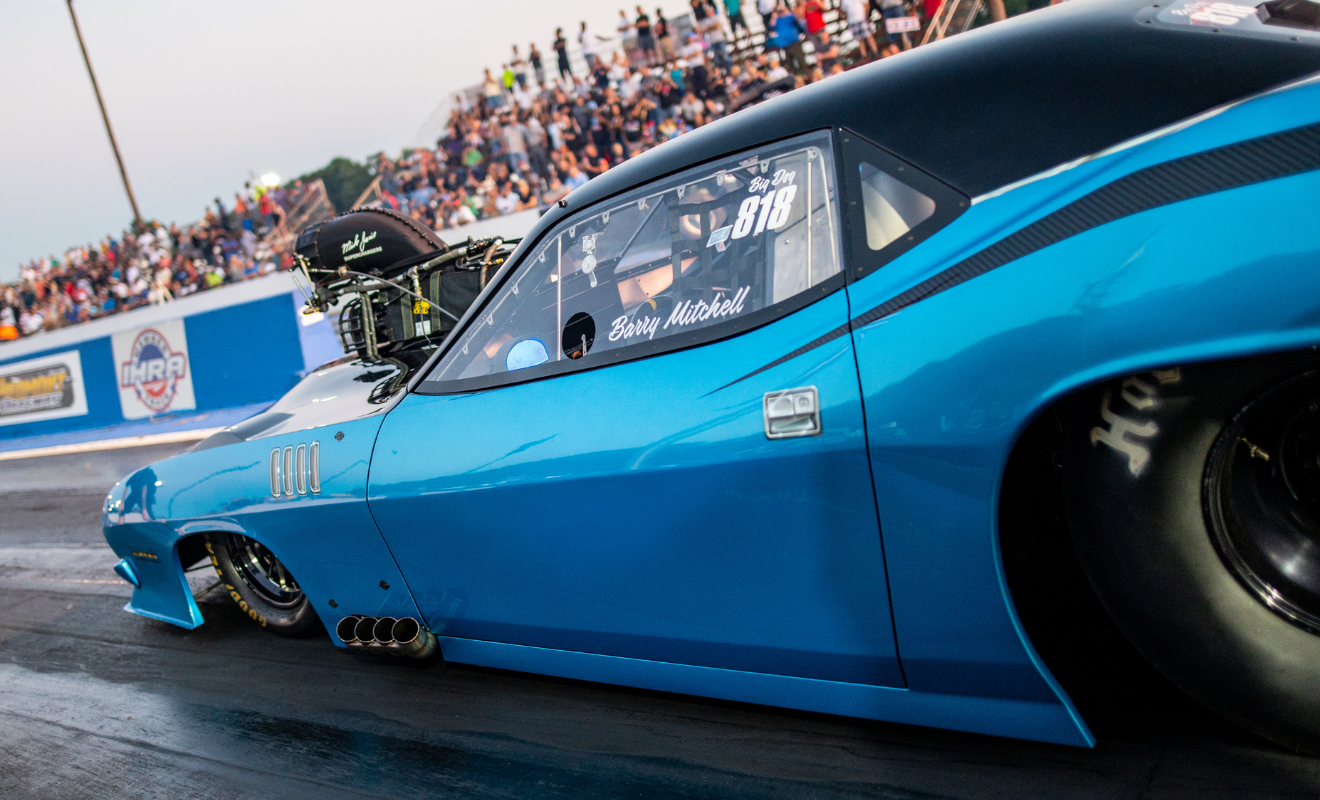 North Carolina-based racer Barry Mitchell has “been going to Big Dog” since he was a teenager. The famed first-Thursday-night-of-the-month drag race has been contested for nearly 30 years at Piedmont Dragway, the self-proclaimed “doorslammer capital of the world”, and still to this day remains the eighth-mile facility’s marquee attraction.

“The first Pro Mod race I ever went to, back when I was 15- or 16-years old, was a ‘Big Dog’ race,” says Mitchell, who could hardly contain his excitement when rehashing the details surrounding winning the event for the first time on August 5th, 2021.

“It was special, I have to admit,” Mitchell continues. “Piedmont has been around since the late ‘50s; there’s so much history there. Where it’s positioned in Julian, North Carolina, with all the population in Raleigh, Durham, Greensboro, Winston-Salem, it draws such a crowd. Track probably draws a minimum of 3,000-people on the first Thursday of every morn for as long as I can remember. We’ve seen the fire Marshall shut the gates. They’ve got announcers – Rico an Alvin, I think he’s in his ‘60s, that have been there forever. It’s incredible.” 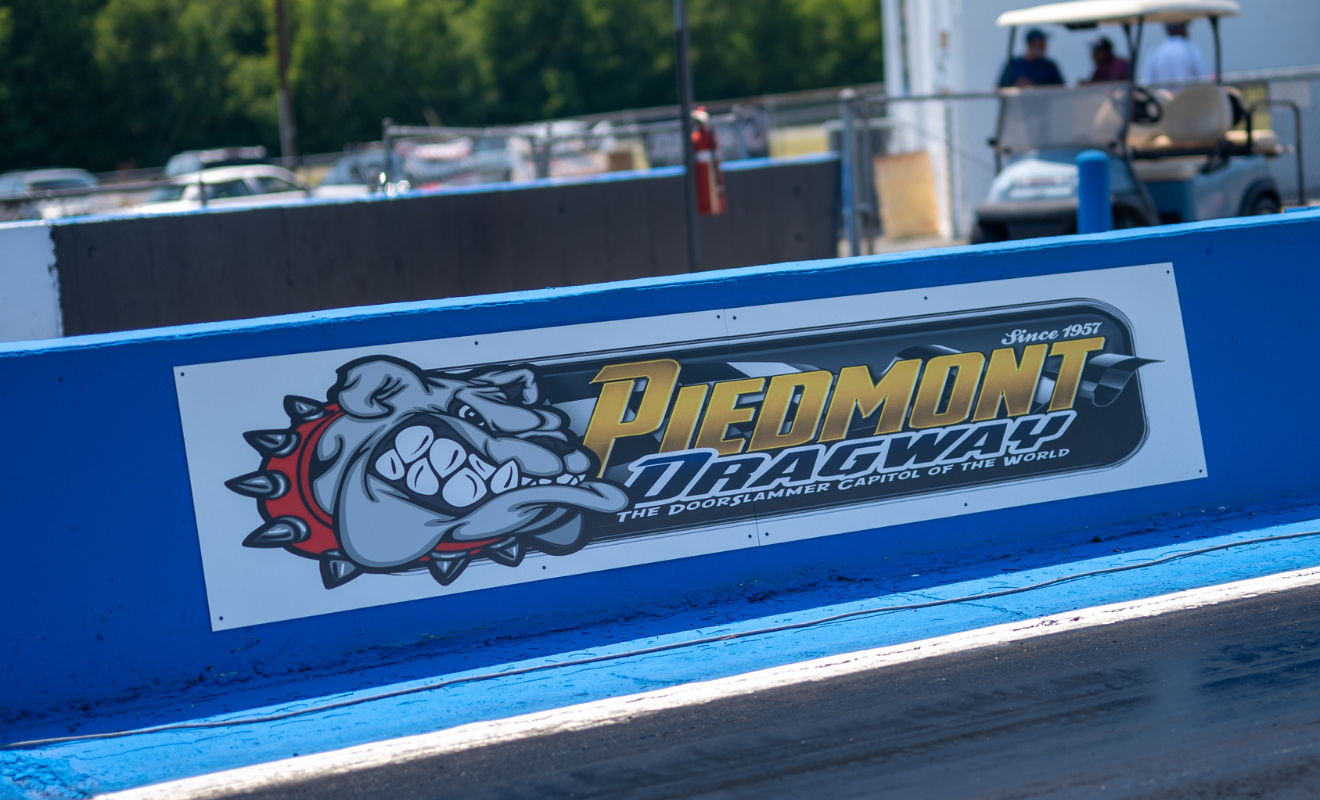 So incredible that it lured Mitchell out of drag racing retirement. He stepped away from the sport a few years ago following a very successful run in radial tire racing, including dominating performances in X275 and helping usher in a new era for the near-unlimited Radial vs. the World eliminator.

“One night a month, six times a year and a hour and a half from my house. That’s about as much racing as I want to do,” explains Mitchell, who is quickly becoming a favorite at the Big Dog Shootout, due in part to his new Jerry Bickel-built, Modern Racing-finished and WYO Motorsports-powered 1970 Plymouth ‘Cuda in B5 blue, but primarily to his strong start to his debut season in Big Dog competition. At the season opening race, Mitchell and company secured the No. 1 qualifying position and set the eliminator’s speed record. The second time out they started from the top of the ladder again, set the ET record and reset the speed record before falling to longtime Big Dog standout Jason Harris. Last week, they repeated those accomplishments and added a final round win over Harris, who is developing as something of a rival halfway through the 2021 Big Dog Shootout Series season.

“To be honest, Todd Tutterow had this car on the money right out of the gate,” says Mitchell. “When we got back into racing, I bought that ‘Cuda from Marty Robertson, took it to Modern Racing and Todd Tutterow’s WYO Motorsports provided everything – Janis blower motor, Ty-Drive, everything. We went to Darlington [Dragway] to test and within four passes we had a car that was competitive. Now, we’re three races into the season, had some success and got a win. We’re feeling good, but there’s some great racers that are committed to the class, so I don’t think we’re going to be able to let up.” 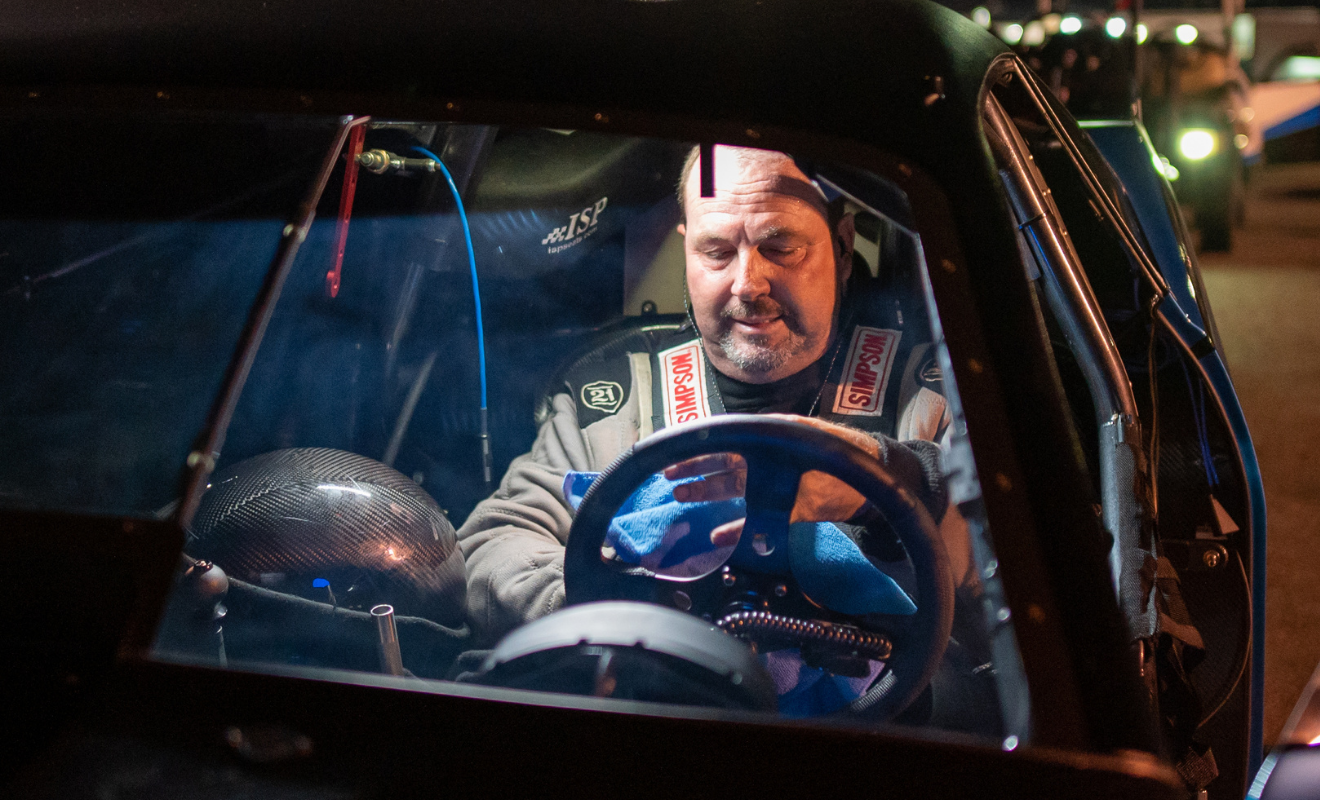 From Mitchell’s point-of-view, the shootout is in a good place rules-wise today after being controversy-ridden essentially since its inception in 1994. He admits it’s a highly-debatable topic, but points to his own 3.849-second pass in his supercharged 481X-powered ‘Cuda to the 3.849-second laps posted by the aforementioned Harris and Chris Rini and their 5.0-inch bore space nitrous engine-powered runs as evidence of the parity and competition in Big Dog in 2021.

“Three cars went .849 that same night,” says Mitchell. “The class is built around a five-inch nitrous motor. These all-billet pieces will really be what sets the pace for the class, and it’s absolutely bananas what these cars are running with 762 cubic inches and two nitrous systems at 2,450- to 2,480-pounds – without a lock-up torque converter. It’s gotta be one of the most impressive things happening in drag racing right now. Has to be.”

While Mitchell is thrilled with his team’s individual performance, he’s equally excited about the direction of Piedmont Dragway’s Big Dog Shootout.

“We’re all-in on this deal,” he admits. “There’s a ton of potential with Big Dog and there’s some really good people behind it. The track obviously is doing a great job, but you’ve also got Bryant Marriner who’s massively involved, supporting the class, beating the brush for people to come race. You’ve got Brian Shrader who’s all-in, Chris Rini, too, and Bob and Jason Harris, of course, who are huge supporters.

“There’s a bit of a challenge there, getting people to build cars of this caliber to race six times a year, but we think we’re making progress and people are excited right now,” he continues. “There are some other tracks talking about doing something similar, there’s talk about some bigger races to compliment what they’re already doing. It’s a great place to race, a perfect fit for me, and I think a lot of other guys.”

Regardless of on-track performance or the future of Big Dog, Mitchell’s enjoying a new pace of the racing life and, perhaps most of all, the opportunity to again race with longtime friend Todd Tutterow. 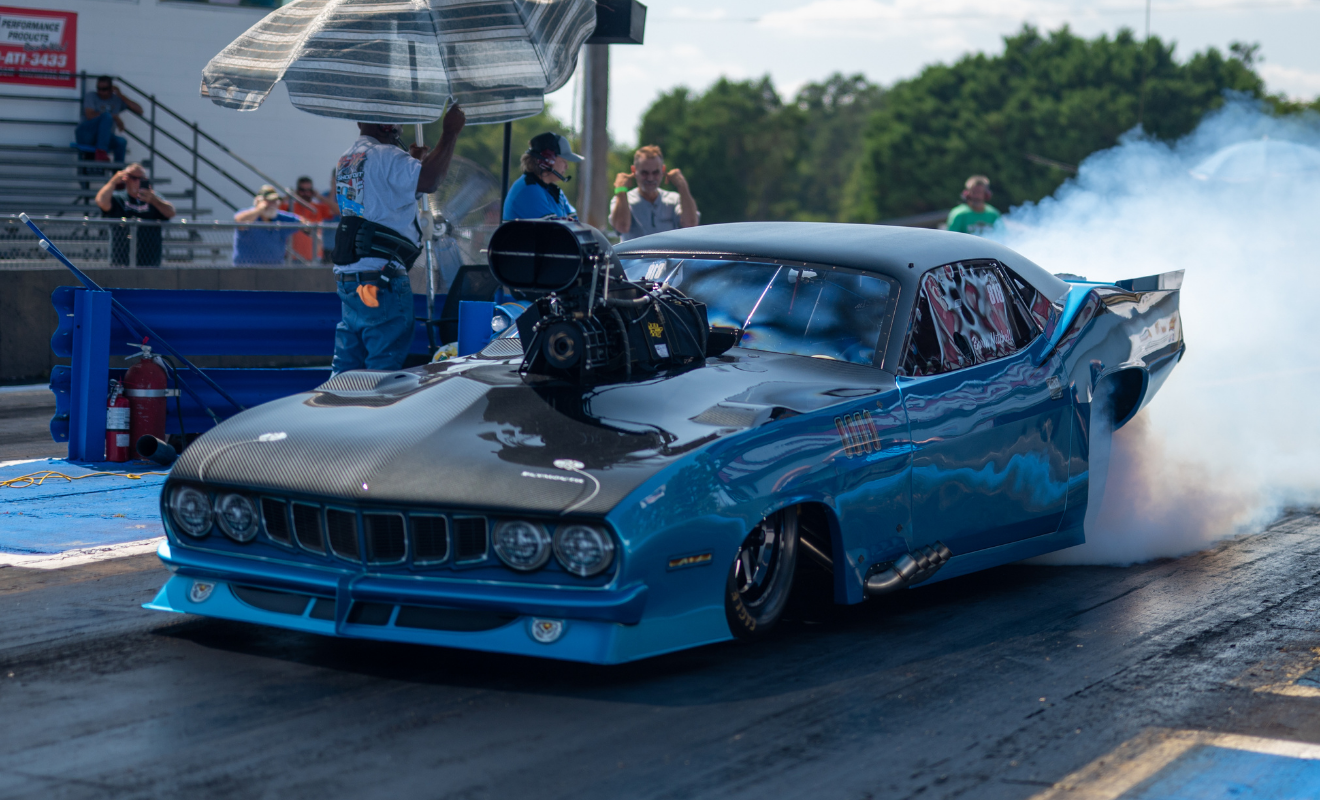 “I can’t say enough about Todd,” says Mitchell. “Todd is actually my neighbor, has been for years. We live like 15-minutes apart. If I’m going racing – especially racing with a blower motor – I’m going racing with Todd Tutterow. Honestly, it was at Todd’s son’s Ty’s wedding that this whole deal was set in motion. 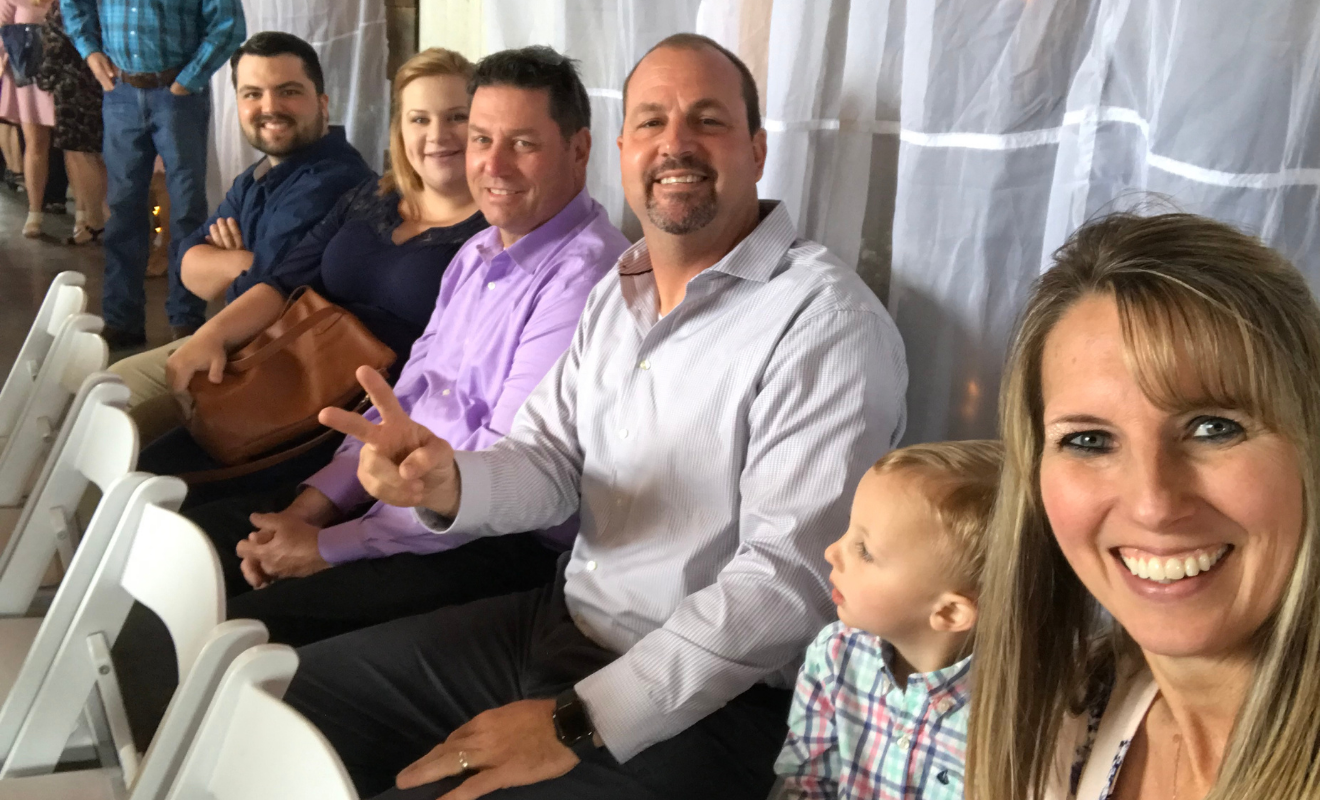 BENCH RACING: Mitchell, along with family and friends, gathered at Ty Tutterow’s wedding and ultimately hatched a plan to return for Barry to return to drag racing.

“I’d been out of racing for a few years, had gotten off social media, hadn’t been out to the races, and we go to this wedding and it’s just racers everywhere. I’m sitting there with Robbie Keziah, Jason Manger and Nick Reynolds, the guys I’d always gone racing with, and we were all kind of pouting about not racing. Stacy Hall from Fulton Competition Engines was there, too, and we got to talking about a 762ci engine that I thought they still had, started talking about a car, and next thing I know we’re going back racing.”

Students of doorslammer drag racing are well aware of Tutterow’s history in Big Dog competition – his dominance and ongoing dance with the series’ rule-makers is something of drag racing folklore – adding to the unique opportunity Mitchell’s return to racing in this particular eliminator represents for everyone involved.

“I think think what it is…it’s that it’s personal,” concludes Mitchell. “Todd has been on the Big Dog scene forever, they wrote rules trying to get rid of him. This is a guy who’s raced around the world, done it all, and you should see him up there on the starting line at Piedmont. It’s 100-percent focus; there are no mistakes. I think if Todd could jump in the car and ride down through there with me, honestly, I think he would.” 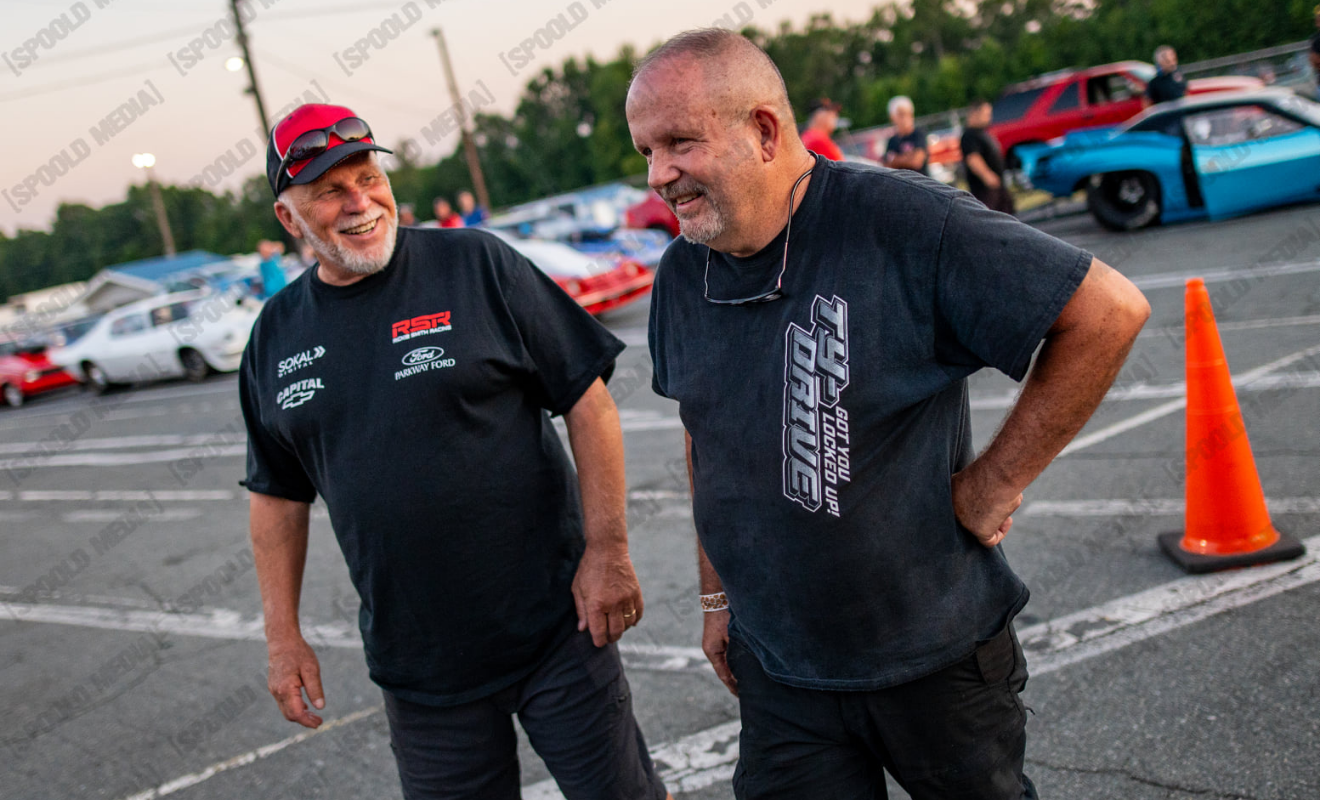 Maybe that’s the secret recipe for Mitchell, and what Big Dog racing represents on the heads up drag racing landscape. It’s the intensity of major league drag racing, but multiplied within a single calendar day.

“One night only,” says Mitchell, with a laugh. “You’re qualifying in the afternoon, running the finals that night. There are people everywhere – literally people piled around the pits at Jason Harris’ trailer, over in Rini’s pits, watching every move Todd makes in our pit. It’s special, and we’re definitely thankful to be a part of it.”