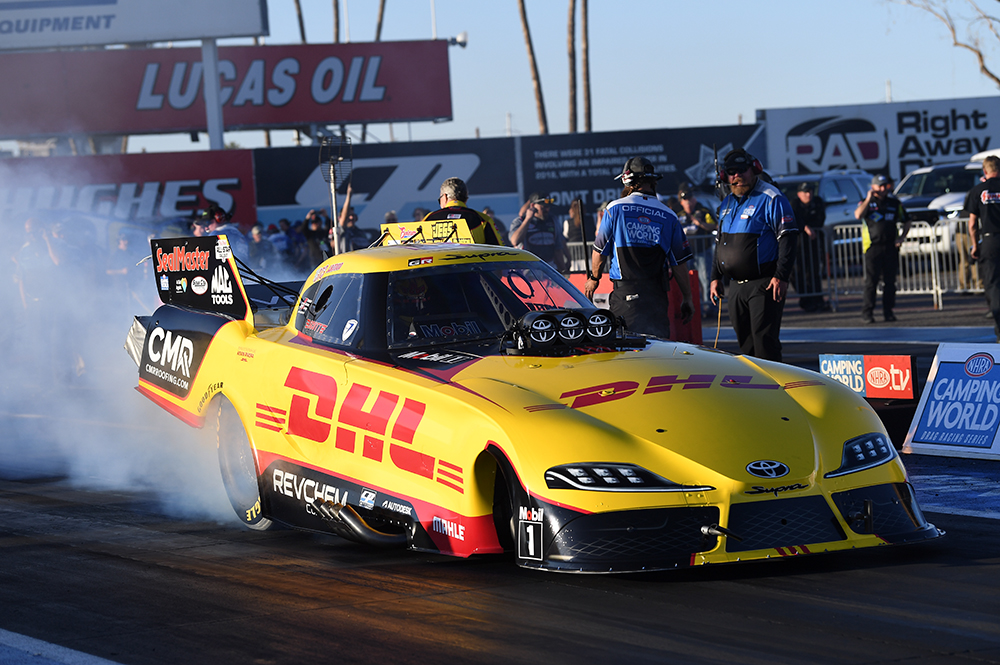 In over five decades of Gatornationals NHRA national events there have been 17 drivers that have picked up a singular win at the first ‘major’ NHRA season. Last year J.R. Todd added his name to that list when he drove his DHL Toyota Funny Car into the winner’s circle. This weekend Todd will be looking to race his new look DHL Toyota GR Supra Funny Car to back-to-back wins at Gainesville Raceway. Four different drivers have won two in a row at the Gators including Ron Capps (2006-07), Ed McCulloch (1989-90), Kenny Bernstein (1984-85) and Frank Hawley (1982-83). Two legends have scored longer streaks with Don Prudhomme winning three years in a row from 1974-76 and John Force dominating with five wins in a row from 1992-96. Getting a second win at the Gatornationals would be a huge statement for Todd and his DHL team.

“You look at the drivers that have gone back-to-back at the Gatornationals and it is a list of legends and Hall of Famers,” said Todd. “Last year’s win was pretty special to start the season with a win and get us off on the right foot. We have the new Supra Funny Car now so it would be cool for its first win on the NHRA tour to be the Gatornationals.”

Last season’s win put Todd into the points lead and he was in title contention for the entire season. Coming down the home stretch leading into the Countdown and through the six race playoffs Todd reached four more final rounds and three more semifinals. The DHL team is working to rebuild that level of consistency with a brand-new race car design.

“This new Toyota GR Supra Funny Car is awesome and only getting better,” said Todd, after the first two NHRA national events. “The team at Toyota Gazoo Racing North America has done a great job on the design and everyone at Kalitta Motorsports had input so we all feel like we are super invested in the success of this Funny Car. It is cool to see the strides we have made over the off-season and where we are going. I think we will see more success this weekend at the Gatornationals.”

Through two races Todd has qualified in the top half of the field twice and raced to the quarterfinals at the season opening Winternationals. Starting the season with three races in four weeks is a positive in Todd’s mind since it gets him right into a racer’s mindset. It also helps keep his DHL Funny Car team in race mode early in the season.

“I love being in my race car and getting to race three weekends out of four to start the season plus a weekend of testing really gets me in the groove,” said Todd. “We are working on a lot of things on the race car so being at the track every weekend is a big plus. This weekend is almost a home game for me since I moved to Florida last year.”

Funny Car qualifying will get underway on Friday afternoon with one session followed by two sessions on Saturday. Final eliminations will begin at 11 a.m. on Sunday with Todd looking for his 11th Funny Car career victory.