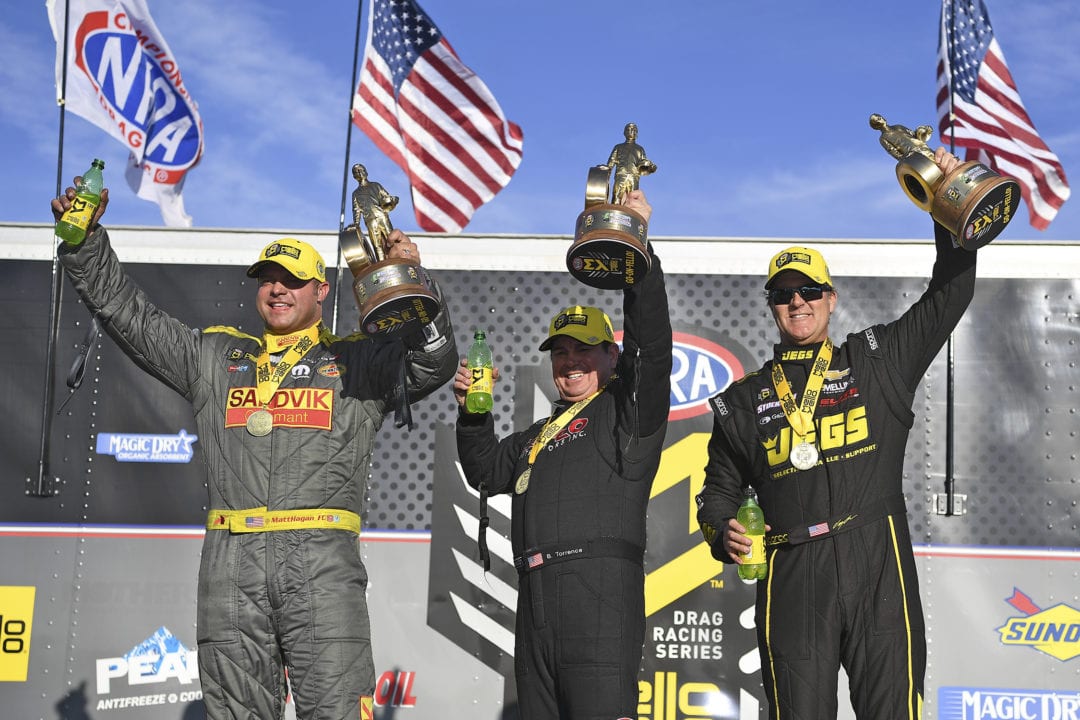 Matt Hagan (Funny Car) and Jeg Coughlin Jr. (Pro Stock) were also winners in their respective categories at the second of 24 events on the 2019 Mello Yello Drag Racing Series schedule.

B. Torrence emerged victorious with a run of 3.965-seconds at 326.40 mph in his Capco Contractors/Torrence Racing dragster to take down Leah Pritchett in the final round. After earning the No. 1 qualifier on Saturday, B. Torrence secured his second career victory.

“It’s just a blessing to be out here,” B. Torrence stated. “I’m trying not to choke up. The car ran great and they all worked so hard to keep a good car under me. Even Steve’s (Torrence) team came over to help them out and it was just outstanding.”

B. Torrence took down Terry Totten, Mike Salinas and rookie debut Jordan Vandergriff as he raced to his first win in 2019. Pritchett overcame Cameron Ferre, Terry McMillen and teammate Antron Brown en route to her first final round of 2019. 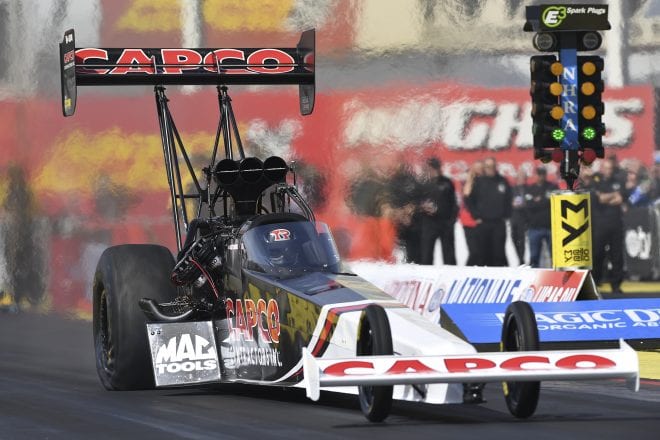 Hagan powered his Sandvik Dodge Charger SRT Hellcat to the Funny Car victory with a run of 3.890 at 325.06 to take down defending world champion J.R. Todd in the final round. This is his first victory of the season and third at the facility.

“For us, this win is huge with the new Hellcat body,” Hagan said. “Hats off to Dickie Venerables (crew chief). He won the race. He had a race car underneath me that was just going down the track every lap. We were able to put on a great show for our fans.”

Hagan qualified second on the weekend and defeated Phil Burkhart Jr., Shawn Langdon and Bob Tasca III, on his path to victory. Todd secured the No. 5 qualifying spot and took down Terry Haddock, Tommy Johnson Jr. and No. 1 qualifier Robert Hight as he reached his first final round of the season.

In Pro Stock, Coughlin drove to the winner’s circle with a 6.557 at 210.67 run in his JEGS.com/Elite Motorsports Chevrolet Camaro to defeat Matt Hartford in the final round. He secured his 62nd victory and completed his 1000th elimination round of his career.

“I felt really good behind the wheel,” Coughlin stated. “We came out on top today and it feels great today to get our 1000th Pro Stock round (run). Huge win today and I’m really looking forward to the rest of the season.”

Coughlin was the No. 7 qualifier as he was victorious against Greg Anderson, Alex Laughlin and teammate Erica Enders as he earned his first victory of the season. Hartford qualified No. 4 on the weekend and beat Val Smeland, Rodger Brogdon and Deric Kramer as he notched his second career final round.