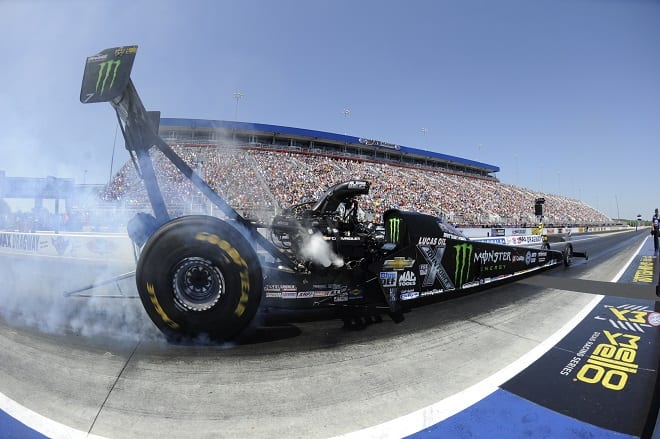 Brittany Force raced to her second victory of the season Sunday at the NHRA Four-Wide Nationals presented by Lowes Foods, and became the first female driver to win the unique event.

Force held off the two-time defending winner of the race, Antron Brown, along with class veterans Doug Kalitta and Clay Millican to take the historic win at zMAX Dragway. Force powered her Monster Energy dragster to a final round performance of 3.764 seconds at 319.98 mph, while defending world champ Brown finished second with a 3.779 at 316.75 in his Matco Tools dragster. 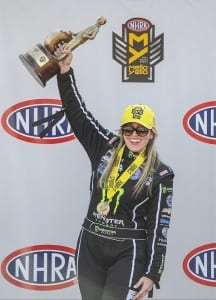 “People say winning the first one is the toughest and it came in my fourth season,” Force said. “The second one came easier, but I wouldn’t say easy. Every single guy on this team is the hardest worker I know and I was so happy that we were able to pull it off. It’s insane. I am proud to be teamed up with [tuning consultant Alan Johnson and crew chief Brian Husen] and having a car that’s so consistent builds my confidence going into the season. The season is still getting started, but we are definitely off to a great start.”

Force was also quickest in her first two quads. She beat Brown, Pat Dakin and Leah Pritchett in the opening round and then raced past Brown, Richie Crampton and J.R. Todd in round two. She produced three straight 7.3-second runs to take the victory and extend her series points lead.

In addition to being the first woman to win a Four-Wide race, she’s also the first female to win in a nitro class at zMAX Dragway. She says all of the accolades coming her way are just surreal.

“I keep hearing these things,” Force said. “It’s big enough that we won, but to do it at the Four-Wide where it wasn’t easy for me. It was a struggle. I didn’t sleep last night. I had nightmares coming off [the final qualifying round] and you know you have to clear your mind and come into it. So to be able to overcome that and have a decent light in the final round when we really needed it, it feels good.”

Force, who advanced to seven finals before she finally won her first race last month in Gainesville, Fla., says she’s now ready to go for a third win next weekend in Houston. However, she admits that winning two of three finals in five races this season and leading the points for more consecutive weeks than any other female in a nitro class is beyond her wildest dreams.

“It didn’t seem real until they handed me the Wally,” Force recalled about her breakthrough victory at Gainesville last month. “It’s an incredible feeling and a proud feeling. All those years and all that hard work, it really made it worth it. For the second one to come this quickly it’s just amazing. Standing behind my team they are bad-ass and are capable of doing anything. They put a car together that ran consistently every single run. I am so proud of all of them.” 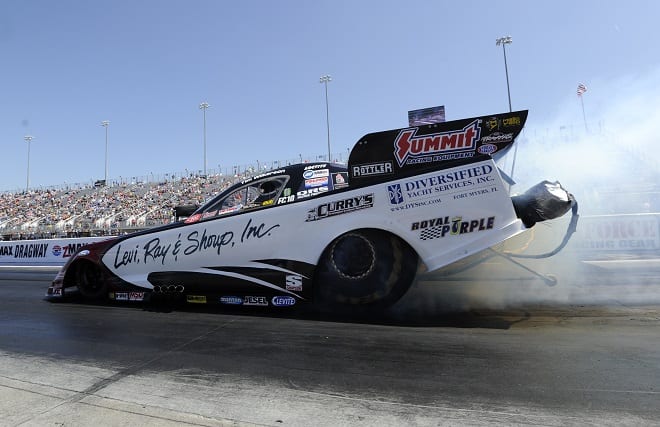 Wilkerson powered to his second Funny Car victory of the season and 20th of his career with a final round performance of 3.967 at 315.56 in his Levi Ray & Shoup Ford Mustang. He was followed across the finish line by Cruz Pedregon with a 3.995 at 313.37 in his Snap-on Tools Toyota Camry, and the trailing Don Schumacher Racing Dodge Chargers of NAPA Auto’s Ron Capps and Mopar’s Matt Hagan.

“I had a very good car,” Wilkerson said. “We don’t come here to chase girls and drink beer, we are here to kick some butts and go home. Me and [assistant crew chief] Richard Hartman are of the same philosophy and that’s why we communicate so well with each other. He has been a great addition to our team and he did a great job up there [on the starting line] today.”

Wilkerson’s machine was the class of the field, and in all three quads he finished first. He opened with a win against Jeff Diehl, top qualifier Alexis DeJoria and series points leader Robert Hight. In round two he outran Pedregon, Courtney Force and Diehl.

“We go up there and hit the gas and see what happens,” Wilkerson said. “It’s just racing. If you get beat, you go home and try again next week. It’s a marathon. We have 24 races. Next race has a different challenge. I think they did a really nice job on all of these lanes this weekend. I think you could win out of any one of ‘em.”

In his 20-year career Wilkerson has won the prestigious U.S. Nationals and claimed victories at his home tracks in St. Louis and Chicago, but he admits the Wally from this event is also going to have a special place in his trophy case.

“I got this off my bucket list,” Wilkerson said. “I’ve been in the finals at this one twice, so I am really happy to get it done. I am excited about it. The whole year has really been exciting, especially with the new TV package and the way everything has been going. My buddy Brittany has won twice, so that’s really cool, too. I was happy to see her win. The Four-Wide is really a neat deal, especially since I won.”

Wilkerson is definitely off to his best start and moved to fourth in the points standings. He said his secret to success is nothing new.

“Hard work,” Wilkerson said with a smile. “They can outspend us, but they aren’t going to outwork us. We have a great group of kids. They try hard and they have a lot of heart.”

In Pro Stock, Line won his third race of the season in his fifth consecutive final round, posting a winning time of 6.565 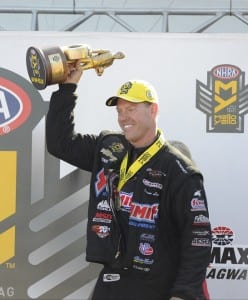 at 211.33 in his Summit Racing Equipment Chevy Camaro and finishing in front of teammate Bo Butner, who trailed with a 6.591 at 210.77 in his Jim Butner Auto Camaro. Drew Skillman and Chris McGaha, also driving Camaros, were third and fourth in the quad final.

It was Line’s first Four-Wide Nationals win and the 40th victory of his career.

“We are taking a lot of pride in it,” said Line, who increased his series lead with the win, about his successful start to the season. “We had more engine changes than anybody else. It’s tough to win at home and I’ve never won the Four-Wide. I consider myself a middle of the road driver, so this race has always been tough for me. So to win this race is pretty gratifying.”

Line made his way to the final by beating Kenny Delco, Vincent Nobile and V. Gaines in the opener and then held off Skillman, Delco and defending world champ Erica Enders in round two.

Hines continued his mastery of the Four-Wide Nationals in Pro Stock Motorcycle and held off top qualifier Eddie Krawiec, Chip Ellis and Matt Smith to take the victory, his third in a row at this event and his sixth zMAX Dragway victory. Hines clocked a 6.844 at 194.42 on his Screamin’ Eagle Vance & Hines Harley-Davidson, while Krawiec finished in 6.849 at 194.44 on his Harley-Davidson to take runner-up honors. It was points leader Krawiec’s fourth consecutive runner-up finish at this event.

“It’s great to come in here at the Four-Wide and get another win so we have our team going in the right direction,” Hines said. “I’m happy to get a win this early in the season. When you get that off your back you can sit back, relax and focus on racing the rest of the season.”

Hines became the third driver in NHRA history, joining Greg Anderson and Hight, and first in the bike class to finish second in both of the first two quads and then win the race. In the opener Hines finished second to Jerry Savoie, but in front of Brian Pretzel and Jim Underdahl. In round two, Hines trailed Krawiec, but finished in front of Savoie and Michael Ray.

“This race track just agrees with me, I feel very comfortable here,” Hines said. “It is almost a calming effect it has on me with everything that is going on up there because it makes me focus that much more.”

With his 43rd career victory, he is closing in on the 44 official victories that the late Dave Schultz won during his career.

“Thanks to Dave and all that he did for the sport, he was one of the pioneers of it all,” Hines said. “Thanks to him we have a great field right now and all of Pro Stock Motorcycle is very stout. We have bump spots that are setting records. It’s awesome to be involved in the class right now.” 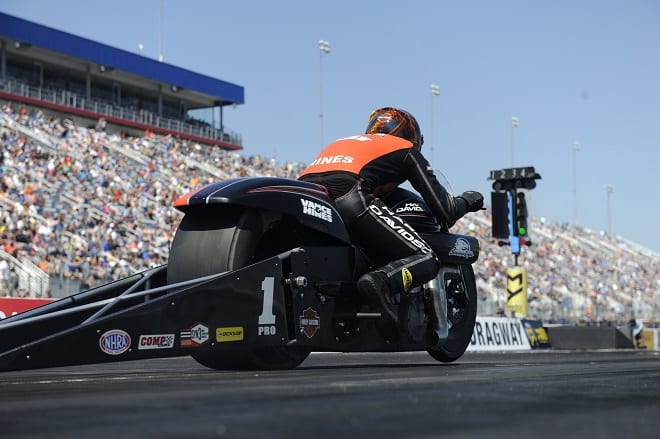 The NHRA Mello Yello Drag Racing Series continues April 29-May 1 with the NHRA SpringNationals at Royal Purple Raceway near Houston.