On a day that included a barrage on the Sonoma Raceway record books, Top Fuel star Brittany Force rolled to her fourth win of the 2022 season on Sunday and moved into the points lead in front of a packed house at the 34th annual Denso NHRA Sonoma Nationals.

Force went 3.709-seconds at 335.48 mph in her 11,000-horsepower Flav-R-Pac dragster to beat Mike Salinas in the final round, moving back into the points lead over Salinas with her first win at Sonoma and 15th in her career. Force made the quickest run in Sonoma Raceway history in the first round with a 3.662 in her win over John Force Racing teammate Austin Prock and then set the track speed record on three consecutive runs on Sunday, capped off by a 337.75 in her semifinal victory over Shawn Langdon. It puts her back in the points lead in Top Fuel and gives Force one of the most memorable wins of her standout career.

“It was an incredible weekend for our team,” Force said. “I’ve been coming here since I was a kid, but I’ve always struggled on the Western Swing as a racer. Winning in Sonoma has always been on my bucket list and to run so outstanding, I’m really proud of this team. To put those kinds of numbers on the board, it’s just incredible. I have to give it up for my team and I’m always going to bet on them. There’s a lot of good competition in this class, but we’re going for this championship. I’m excited for today and we’re ready to keep going.”

Racing at his home track, Salinas advanced to his 14th career final round and his fifth this season picking up round wins against Justin Ashley and Doug Kalitta. He now trails Force by six points. 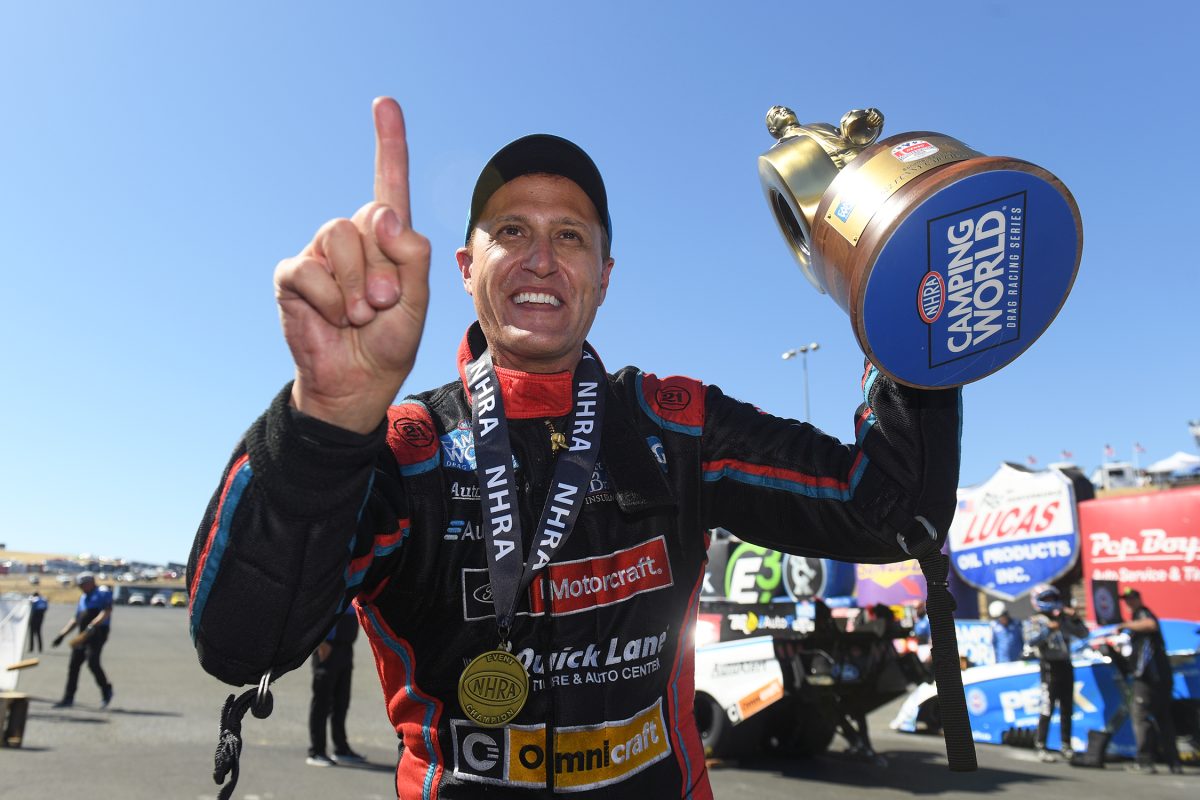 Bob Tasca III was the epitome of consistency in Funny Car, starting eliminations with back-to-back runs of 3.875 and finishing his day by going 3.911 at 325.61 in his 11,000-horsepower Motorcraft/Quick Lane Ford Mustang to knock off John Force in the final round. It gives Tasca, who had lost in the final round at the past two races, his first win of the season and 10th in his career and gives the standout plenty of momentum in the second half of the season. He picked up wins against Jason Rupert, Blake Alexander, and then points leader Robert Hight to set up the marquee matchup with Force, and Tasca put on another show as he prepares his march for a run at a world title.

“The only reason we’re out here is to run for a championship,” Tasca said. “We’ve sacrificed a lot to get where we’re at this season and with this set-up, we’ve put the field on notice. We made the decision to get our car set up to run for a championship and the car showed the field today it is capable of that. It’s exciting for me as a driver and this thing was as straight as an arrow all day long and it was lights out in the final. I have the ultimate respect for John and what he’s done and to beat him in the finals, it’s pretty special.”

For Force, he reached his 263rd career final round on the strength of round wins against defending world champ Ron Capps, J.R. Todd, and Alexis DeJoria. Hight maintained the points lead, which now stands at 144 points over Matt Hagan.

In another thrilling duel between a pair of longtime Pro Stock rivals, Erica Enders kept on rolling, knocking off Greg Anderson on a holeshot in the final round to collect her first career victory at Sonoma Raceway. Enders posted a brilliant .018 reaction time and held off Anderson at the finish line with a run of 6.574 at 196.62 in her Melling Performance/Elite Motorsports Chevrolet Camaro to earn her 39th career win and sixth in her dominant 2022 season. She beat Fernando Cuadra Jr., Mason McGaha, who upset Enders in the first round last weekend at Denver, and Aaron Stanfield to reach the finals. She finished the job against her biggest rival and can now lay claim as a winner at Sonoma to continue what’s been a dream season.

“This is huge for us,” Enders said. “This has evaded us for 18 years and every season this is one race I wanted to win. We were finally able to capitalize on it and my guys worked so hard. It’s so crucial to be positive. I know we have the car to beat, and I just have to do my job. All day long, I was pretty consistent on the tree, and I’m super stoked with this win. It takes me back to my first win and anytime you have one of these awesome Wally trophies in your hand, it’s a good day. Being able to win for the first time here is truly something I’ll never forget. It’s just been an amazing day.”

Anderson, who remains a win shy of his 100th victory, advanced to his first final this year and 168th in his career by defeating Steve Graham, Bo Butner, and teammate Kyle Koretsky. Enders’ points lead now stands at 80 points over Stanfield heading to Seattle.

After back-to-back final round appearances, Joey Gladstone broke through for his first career victory in Pro Stock Motorcycle on Sunday, knocking off Eddie Krawiec in the final round with a pass of 6.759 at 200.68 on his J&A Service Suzuki Hayabusa. Krawiec went a quicker 6.758, but Gladstone was quicker on the starting line with a .026 reaction time and held off the veteran to claim his first win in the class. He reached the final round with wins against Jianna Evaristo, Katie Sullivan, and Jerry Savoie, going a stellar 6.735 at 202.18 in the second round. He made sure to finish the job this time, setting off an emotional celebration for Gladstone and his team.

“I’ve been waiting for this day since I was 12 years old when I decided I wanted to race Pro Stock Motorcycles,” Gladstone said. “To finally be here to do it and race the best guys in the world, this means everything to me. I just had to do my job out there. It’s been quite the road, and this means a lot and more than you could ever imagine. I’ve spent my whole life trying to get here and this is just the start for us.”

Krawiec reached his 90th career final round thanks to victories against Kelly Clontz, defending world champ Matt Smith and teammate Angelle Sampey, who now has just a two-point lead over Gladstone in the points standings.

The NHRA Camping World Drag Racing Series returns to action on July 29-31 with the final race of the Western Swing, the Flav-R-Pac NHRA Northwest Nationals at Pacific Raceways in Seattle. It is the first race at the track since 2019.