Force picked up her fourth No. 1 qualifier of the season and 36th in her career by going 3.758-seconds at 325.61 mph in her 11,000-horsepower Flav-R-Pac dragster to close out qualifying on Thunder Mountain. She’ll meet Terry Totten to open eliminations and was thrilled with how her team bounced back after struggling during qualifying on Friday. It was a different story on Saturday, as Force made two quality runs, going to No. 1 to close out the day. The former world champ will now try to win for the first time in Denver and jump back into the points lead in the process.

“We turned it around with two solid passes today, so we’re feeling good and in a great position for tomorrow,” Force said. “It’s game on tomorrow and we’re trying to get back on top as the points leader. I’ve struggled here in the past, so we’re looking to turn it around here. I believe in this team, but it’s tough out here. There’s no other track like this one. After Friday, our focus wasn’t going to No. 1. We wanted two solid passes, but lucky for us we went to the top.”

Justin Ashley jumped to second during the final session thanks to his standout run of 3.765 at 327.51, while provisional No. 1 qualifier Leah Pruett improved on her Friday run to qualify third with a 3.771 at 322.50. 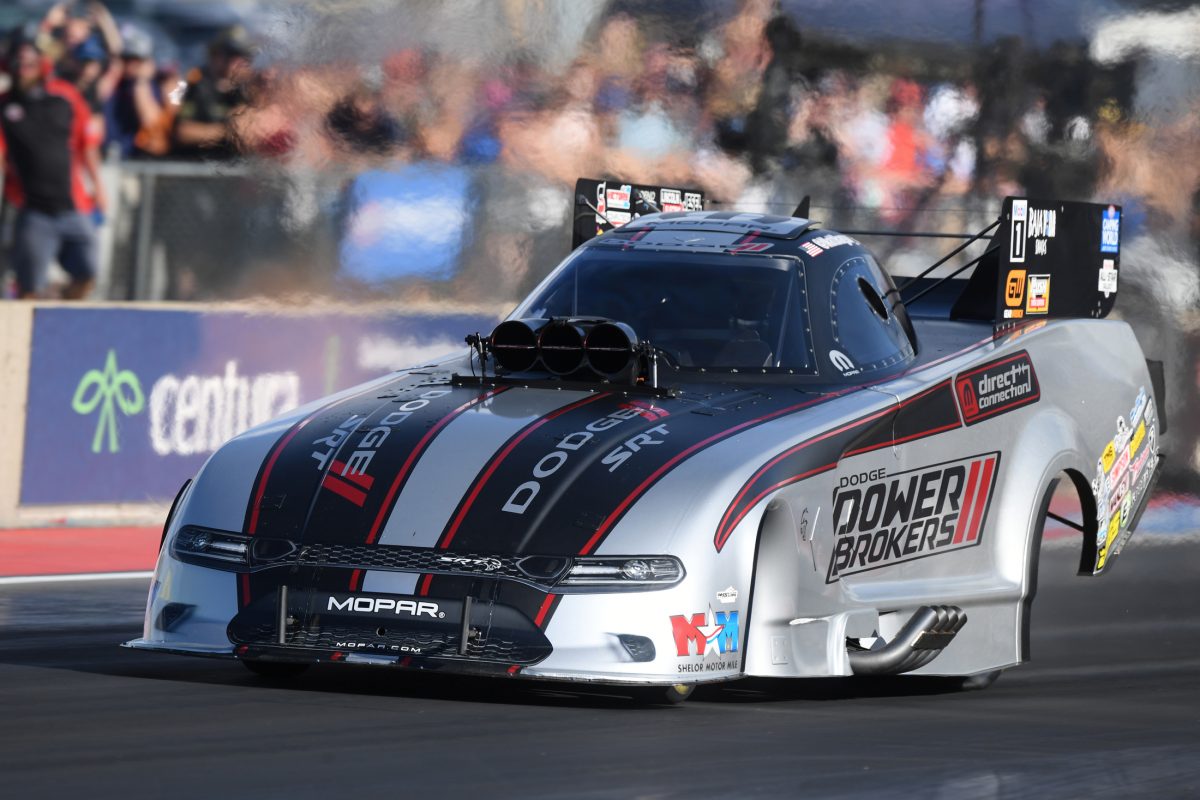 In Funny Car, Hagan held onto the No. 1 spot by improving on his run from Friday with an impressive pass of 3.908 at 323.12 in his 11,000-horsepower Dodge Power Brokers Dodge Charger SRT Hellcat. It gives the three-time world champion his fourth top position during the 2022 season and the 47th in his career. After two great days of qualifying, Hagan will try to win for a second straight year on Thunder Mountain at his sponsor’s race and possibly take the points lead in the process.

“All in all, the car is running great,” Hagan said. “We were able to stay No. 1 and I’m pretty happy with the performance. I think we’ll have a great car on Sunday and the fans got a great show here today. It was a packed house and for us, seeing so many fans here, it’s really cool. On raceday, it’s always crazy here. If the sun is out, it can be tricky, and it could turn into a driver’s race. But for me, I feel confident in what Dickie’s done here and the car he’s given us, so we’re excited.”

After watching Elite Motorsports teammate and points leader Erica Enders go to the top to open the final round of Pro Stock qualifying, Stanfield delivered a superb run to close out the session, jumping back on top with a 6.934 at 196.82 in his Janac Brothers Chevrolet Camaro. It gives Stanfield his fourth No. 1 spot this season and fifth in his career as the young standout continues to impress in his first appearance on Thunder Mountain. He’ll now look for his first Denver win as he aims to advance to his fourth straight final round in what has been a banner 2022 season.

“I knew we were capable of running a little better, and it was really cool for all of us,” Stanfield said. “To have Elite Motorsports qualify in the top three spots, that’s extremely hard to do, especially when the fields are so tight. I can’t thank all the guys enough and I’m having a blast up here. The stands are jam-packed and it’s always a great show here. It’s something different behind the wheel as far as driving goes, but I’m having fun. I definitely cleaned up my shifts a bit and I felt like I did a much better job driving today.”

Enders secured the second spot with her 6.938 at 197.02 in the final qualifying session, put the four-time world champ in a good position after struggling during the first three qualifying runs. Cristian Cuadra took the third spot after going 6.940 at 195.59. 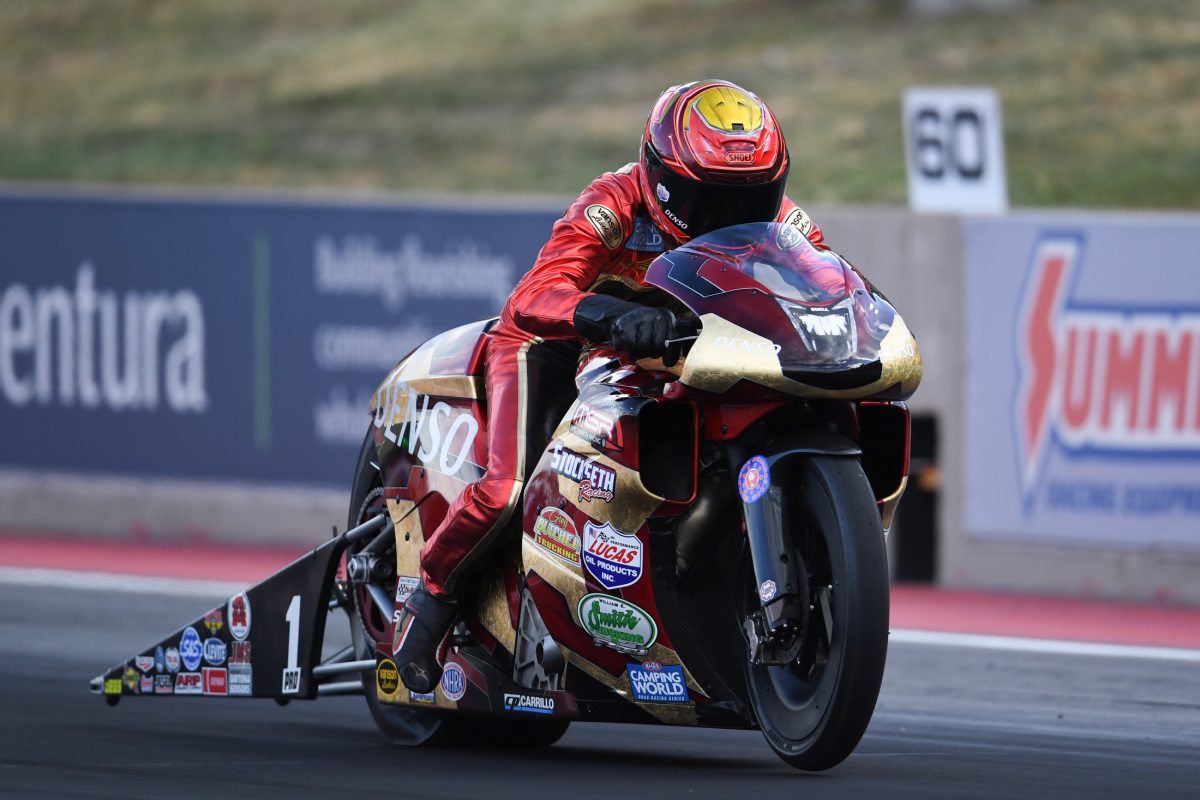 Smith lowered the boom on Saturday in Pro Stock Motorcycle, setting both ends of the Bandimere Speedway track record with an impressive blast of 7.090 at 189.79 on his Denso Auto Parts Buell. The defending world champ and event winner set the track record on Friday but delivered in an even bigger way to close out qualifying, becoming the first motorcycle to go in the 7.00s on Thunder Mountain. It gives Smith his second No. 1 this season and 49th in his career, and plenty of confidence heading into eliminations after a stellar two days of qualifying.

“The Suzuki bikes were stepping up (today), so I tried a tune-up and obviously it worked,” Smith said. “It’s awesome (to set a record). I’ve always loved coming here and we come here to win the race. That was the whole reason why we brought out the (EBR) for this race. There might be a little more, but we definitely learned something today. As long as you ride the bike well and hit the light well, you can do well here, but we’ve got the bike on kill every time up here.”

Smith’s wife, Angie, qualified second thanks to her 7.151 at 188.25 in the final qualifying session, while Eddie Krawiec’s 7.164 at 186.56 gives him the third spot heading into eliminations.

Eliminations for the Dodge Power Brokers NHRA Mile-High Nationals at Bandimere Speedway begin at 11 a.m. on Sunday. Television coverage of the race begins at 4 p.m. ET on the FOX broadcast network.