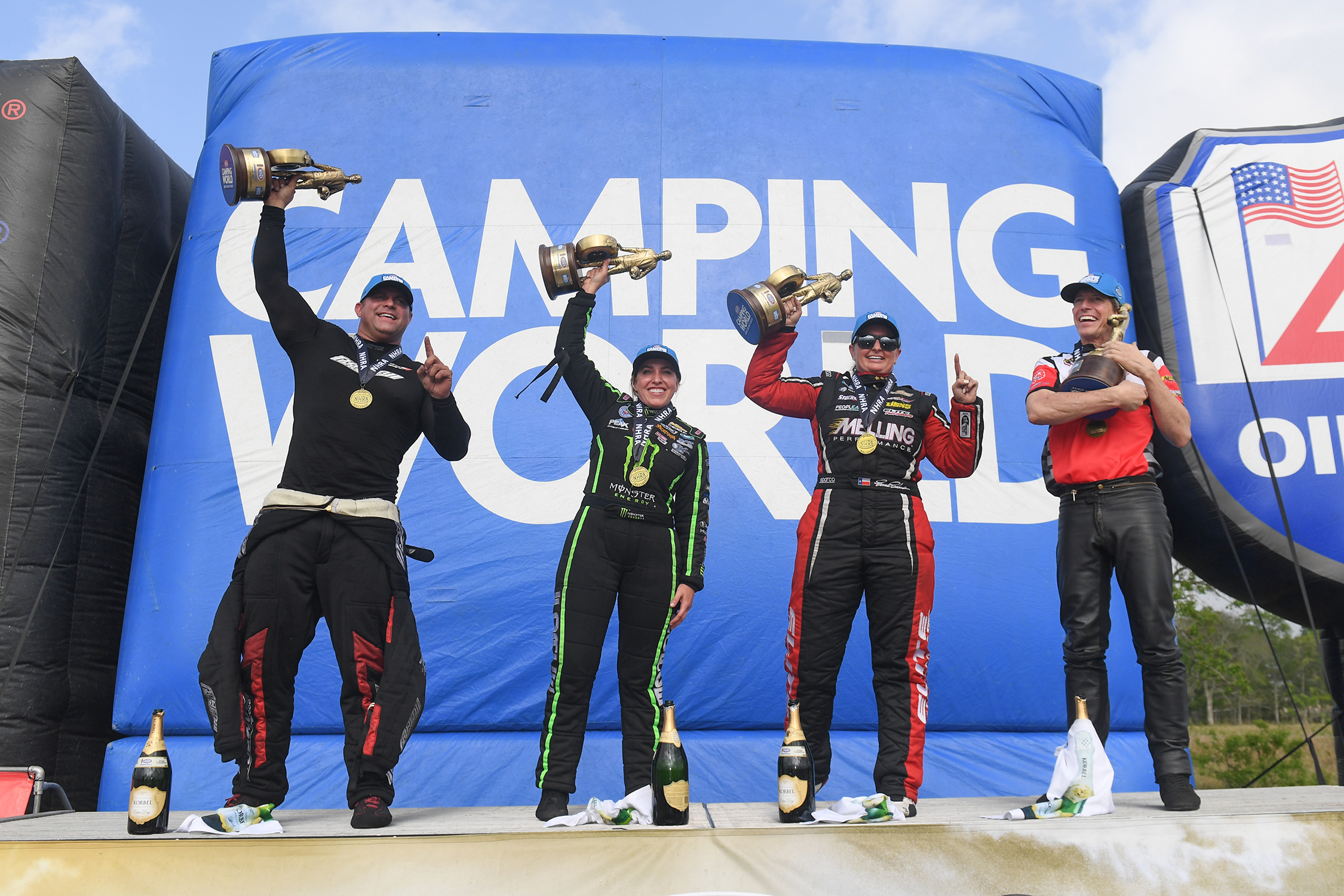 In the first all-female final round in NHRA Pro Stock history, Houston native Erica Enders closed out Houston Raceway Park in style, picking up the win in front of a sold-out crowd at her home track on Sunday at the 35th and final NHRA SpringNationals. 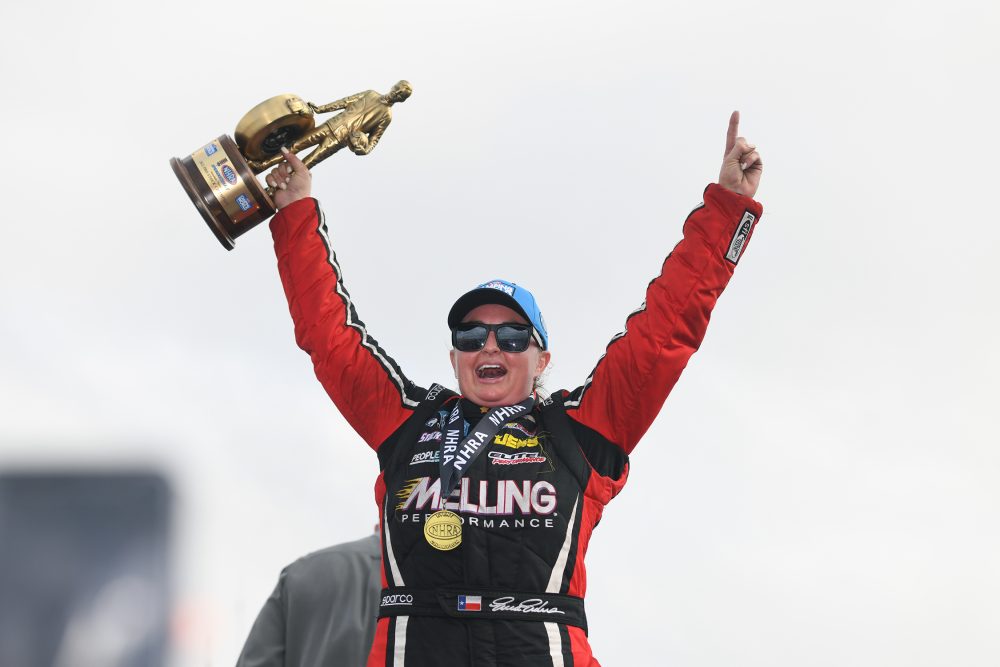 Enders, a four-time Pro Stock world champion, knocked off rookie and No. 1 qualifier Camrie Caruso in the championship round, getting her third win this season and 36th in her career with a pass of 6.568-seconds at 210.24 mph in her Melling Performance/Elite Motorsports Chevrolet Camaro. It’s also her third Pro Stock win at Houston Raceway Park, where Enders grew up racing. Her first national event win came in Super Gas in 2004 at Houston and she finished her racing at the facility with an impressive Pro Stock win thanks to round wins against Cristian Cuadra, Matt Hartford, and Kyle Koretsky. That led to a historic and memorable final round where Enders was able to track down Caruso at the finish line, moving into the points lead as well.

“I grew up drag racing here and I don’t know if I can put this into words. I made my first passes down the racetrack when I was eight years old and my first Wally came here and to do this here in Houston means the world to me,” Enders said. “We were able to execute perfectly today and I’m so proud of this team. It was just an unbelievable day. It was challenging to get focused and get my emotions under control, but I tried to put all of that on the backburner and get it done. To be able to execute and have such a great team and great car today, this is one of my proudest moments.” 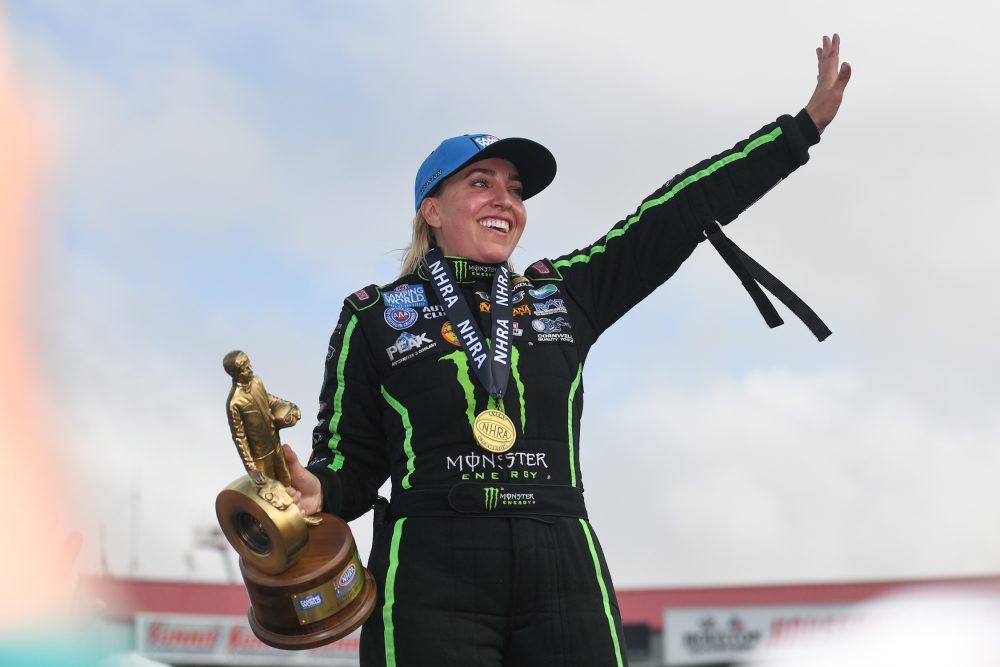 In Top Fuel, Brittany Force continued her hot streak, rolling to a second straight victory with a blast of 3.767 at 321.42 in her 11,000-mph Monster Energy dragster. In what was the final NHRA Camping World Drag Racing Series pass at Houston, Force beat Justin Ashley on a holeshot, posting a .041 reaction to hold off Ashley’s run of 3.763. To reach the final round, Force knocked off Josh Hart and Shawn Langdon and Billy Torrence, capping off her remarkable day with a third – and final – win in Houston and the 13th in her career. The victory also helped give Force the Top Fuel points lead after five races.

“I felt confident coming in and it was an incredible day for our team,” Force said. “To close out Houston with a win is just incredible for us. Justin is one of the best leavers in the class, so I knew we had to step it up. I really wanted it in the final round, so I had to do my job. Getting back-to-back wins is huge for us, and we’re back in the seat next weekend so we’ll try to do it again in Charlotte. All the hard work by our team, for it to pay off with two wins in a row, it’s great for them and I’m really proud of all of my guys.”

Ashley advanced to his sixth career final and second this season thanks to victories against Doug Foley, Austin Prock, and four-time defending world champion Steve Torrence. 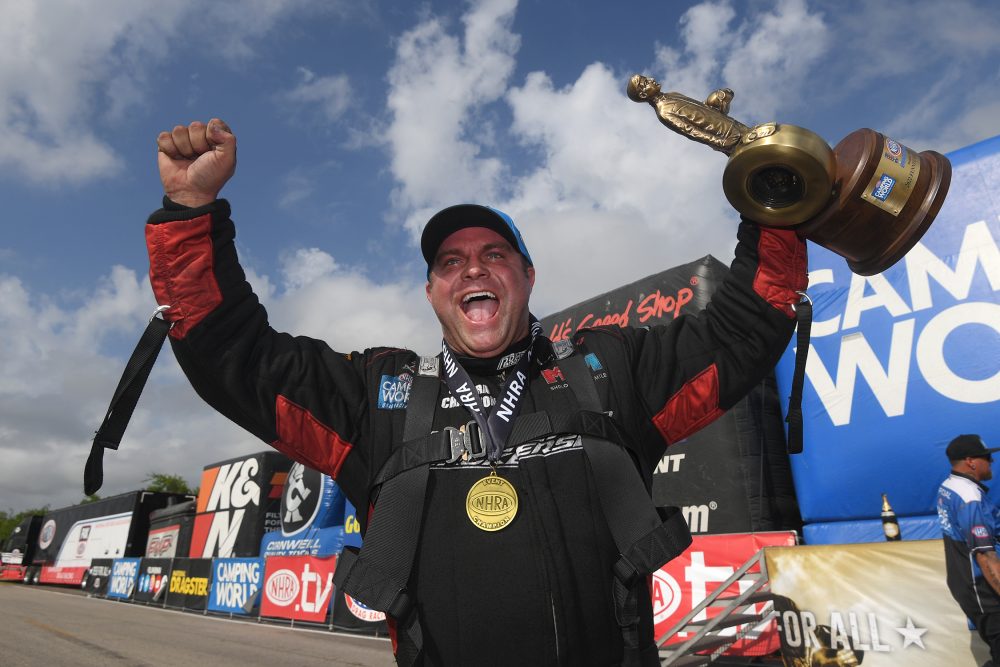 At the site of his first career Funny Car victory, Hagan closed out Houston Raceway Park with the last win at the facility in the class, denying Bobby Bode the chance for his first win with a winning run of 3.982 at 326.63 in his 11,000-horsepower Dodge Power Brokers Charger SRT Hellcat Funny Car. It gives the points leader his second win this season and 41st in his career. He reached the final round for the fourth time in 2022 in the loaded class on the strength of round wins against John Force, No. 1 qualifier Ron Capps and J.R. Todd. Hagan chased down Bode in the final when the young driver suffered a massive engine explosion near the finish line.

“This has been a special place for me,” Hagan said. “This is where I got my first win, so this race means a lot to me and to close it out here, that’s huge. It was another good weekend and I feel like we’ve been making a statement. There’s a lot of heavy hitters in this class and there’s no easy runs. To keep doing what we’re doing says a lot about the team that (crew chief) Dickie (Venables) has assembled. It’s a great team and this win is just a statement to how good these guys are. (Team owner) Tony Stewart has instilled such a winning mentality in this team and that’s what I love. It’s just an incredible team and I’m excited to see what’s next.”

Bode’s first career final round came after he knocked off Alexis DeJoria, Cruz Pedregon and Chad Green, who was also seeking his first berth in the final round. 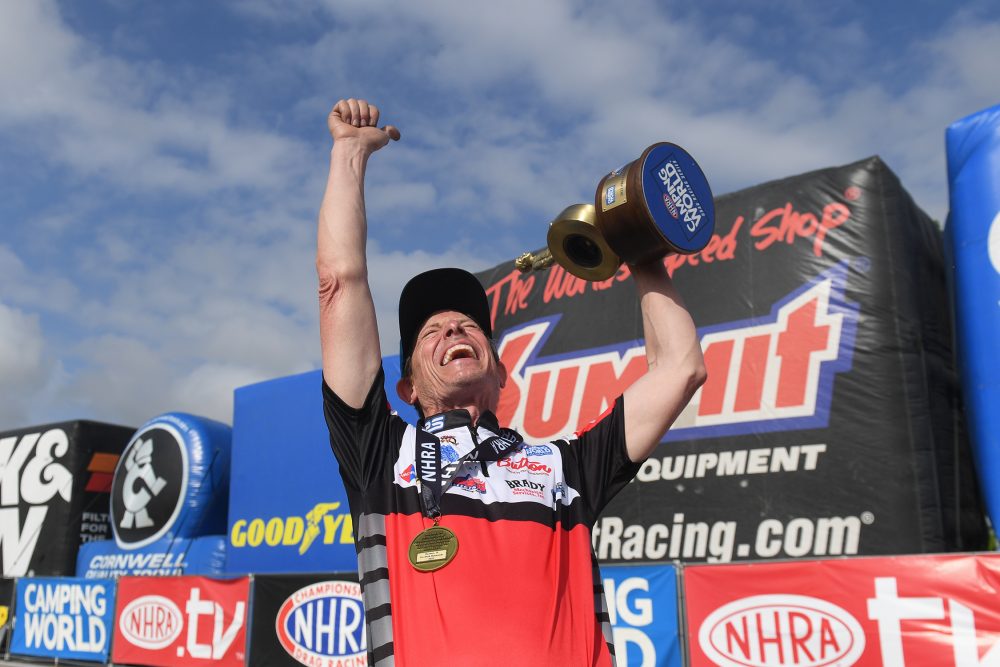 Johnson enjoyed a banner day in Houston to pick up his first Pro Stock Motorcycle win of the season, going 6.720 at 199.91 on his Slick 50 Suzuki to beat longtime rival and defending world champ Matt Smith in the finals. Johnson was simply dominant during eliminations, making the quickest run in Houston history in the opening round and then setting both ends of the track record a round later with a pass of 6.711 at 201.55. He knocked off Eddie Krawiec to advance to the finals, where he put together another strong run to earn his 10th career win and first at Houston Raceway Park.

“A win like this all starts back at the shop,” Johnson said. “This is a huge accomplishment for us. We didn’t run well at Gainesville. I really felt like I had a good bike, but we couldn’t show it. It was a huge setback for our team, so to come here and get a win was big. It’s nice to get a win early in the season and this race is also so special to us because it’s where I got my first sponsor. There’s a lot of good memories here.”

Smith advanced to the final round for the first time this season and the 66th time in his career thanks to round wins against Kelly Clontz, Chris Bostick and No. 1 qualifier Karen Stoffer.