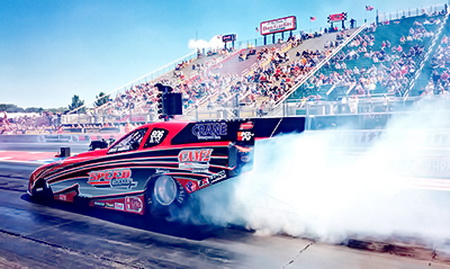 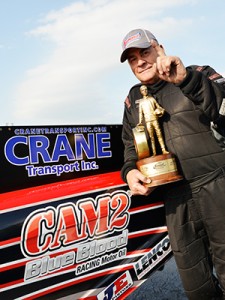 Australian racing veterans and longtime NHRA competitors Harker and his wife Jenelle debuted at this past weekend’s event in only their seventh national event since returning to the sport after a three-year break. Proving they hadn’t missed a beat, Harker took the honor of being number-one qualifier in Top Alcohol Funny Car with a 5.54 elapsed time at 264.39 mph.

Consistency is the game and Harker proved his experience as tuner and driver throughout the event, kicking things off in round one with a 5.58 at 263.41 to win over a red-lighting Todd Robertson. The consistency continued in round two, where Harker again laid down a 5.58 at 262.82 mph to defeat Fredd Tiggers’ 5.60 at 261.47 pass.

In a wire-to-wire battle Harker faced off against Central Region champion Chris Foster in a race that had the fans cheering in the grandstands. Both drivers were out to win and left nothing on the table with Harker pulling a 0.026 reaction time to Foster’s competitive 0.063 before the two fought all the way to the quarter-mile finish line. A half car length is all it took for Harker to drive around Foster to win the event that was decided on the starting line as Harker defeated Foster’s quicker 5.61 ET with a slightly slower 5.62 at 240.77-mph pass.

Once again the folks at Summit Racing Equipment Motorsports Park put on a great event for the fans and the racers. Showcasing spectacular weather and great performances all weekend, the Speed City-CAM2 Blue Blood Racing Motor Oil team can now notch the Norwalk, Ohio racetrack off their Wally list.