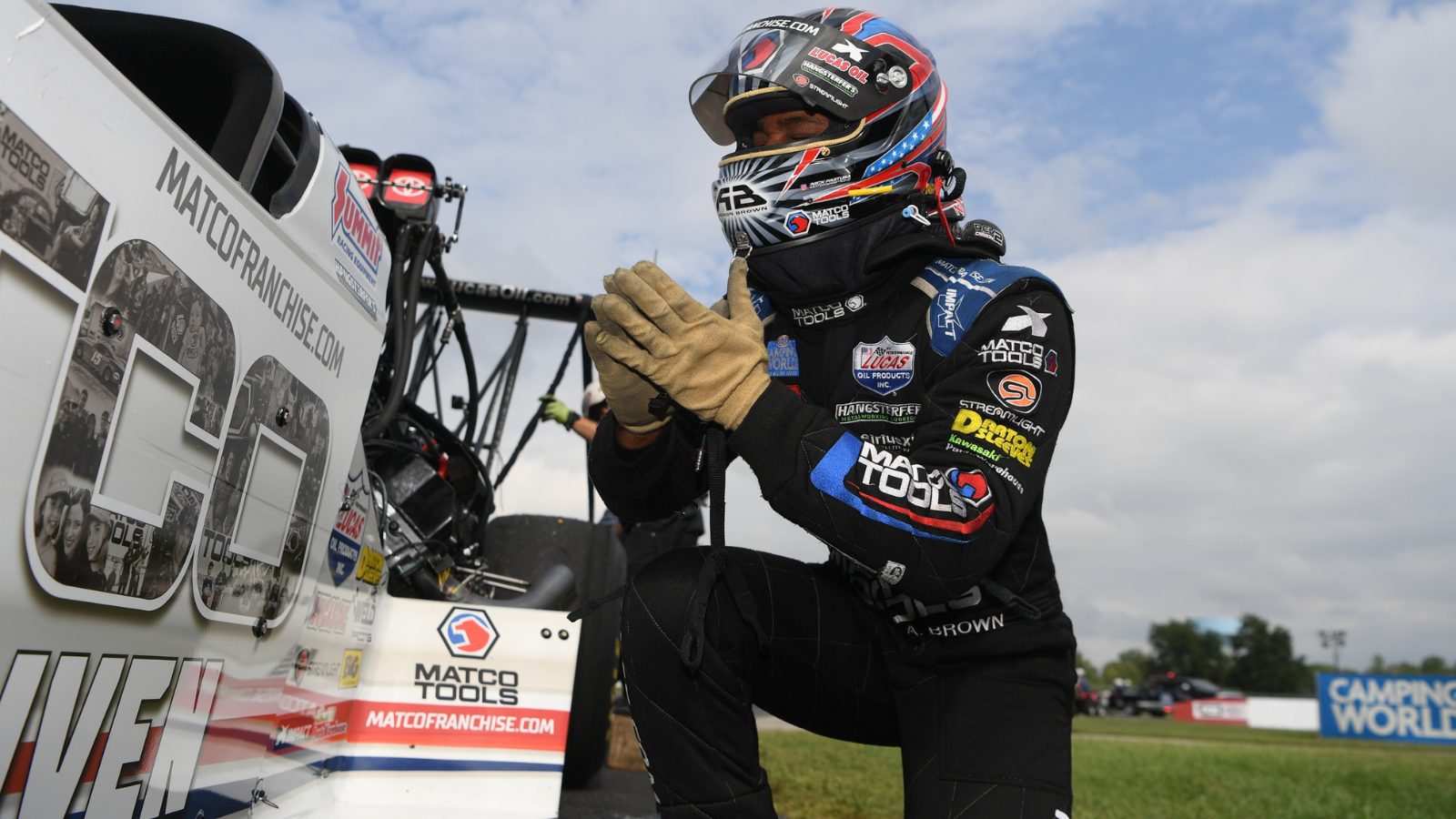 Racing on the NHRA Camping World Series’ biggest stage, Antron Brown earned a monumental victory on Monday afternoon at the NHRA U.S. Nationals at Lucas Oil Indianapolis Raceway Park. Brown secured his second win as a team owner when he drove his Matco Tools Top Fuel dragster to a 3.706-second pass at 321.65-mph to defeat points leader Brittany Force in the final round.

“It’s unbelievable,” Brown said of his 70th NHRA victory just moments after hopping out of his Matco Tools/Lucas Oil/Toyota dragster. “Thank God above, all the prayers, all the hard work. We’re making it happen. We’ve been working so hard for this. To be here in Indy, our hometown – I live eight miles from the track – I’m just super proud. My team did an incredible job. We did it. We brought it home.”

The U.S. Nationals final round was Brown’s third time facing Force this season, and he’s won all three matchups. It was Brown’s fourth time winning the prestigious Indy race, adding to his 2011 victory in Top Fuel and two wins in Pro Stock Motorcycle.

Competing with 24 other drivers vying for a spot in the 16-car field, Brown qualified No. 6 with a 3.712 at 330.55-mph pass. That set up a first-round matchup with Gainesville winner Tripp Tatum. A side-by-side race followed, with Brown leading the race from start to finish.

Brown left the starting line first again when he raced four-time and defending world champion Steve Torrence in the second round, winning with a 3.736 while Torrence smoked the tires.

Crew chiefs Brian Corradi and Mark Oswald made a big step up for the semifinals, where Brown made his quickest run of the weekend and second-quickest of the season, a 3.698 at 329.99, to beat Justin Ashley’s 3.714.

“That was a tough round against Brittany,” Brown said, “but it was really tough winning the semifinals against Justin Ashley and the Phillips Connect team.”

Brown was joined in the winner’s circle by his Toyota Racing teammate, Ron Capps, who earned his first U.S. Nationals victory in Funny Car driving his Toyota GR Supra. Both drivers branched out to form their own teams this season after racing together at Don Schumacher Racing for years.

“We’ve always talked about it, if we can get in that winner’s circle together, that’s going to be a special moment,” Brown said. “To do it at the U.S. Nationals, you can’t ask for a bigger present.”

The AB Motorsports team has made significant strides since starting the season. Over the off-season, Brown and the team assembled new cars and stocked new trailers with fresh parts and brand-new Matco tools. The U.S. Nationals victory was further proof that those efforts are paying off.

“When that win light came on, I was like, ‘Man, look what this team has come through,’” Brown said. “Starting with ‘Big C’ Brian Corradi, Mark Oswald, and Brad Mason, all of our guys put that work in to get those results. That’s a testament to all of our guys and gals. My wife and my kids, we’re doing this as a family. It’s everybody involved. We never lost the faith. We never gave up.”

Brown and his Brownsburg, Ind.-based AB Motorsports team entered the U.S. Nationals ranked ninth in points. With his win, he moved up to sixth as the points reset for the six-race Countdown to the Championship playoffs.

“With the Countdown right in front of us, going from being 11th or 12th three races ago to being No. 6, I think we’re going to be in that conversation,” said Brown, whose trip to the winner’s circle on Sunday was his second in three events after winning in Topeka, Kan. last month. “We just want to go out there and compete and go after that championship. That’s our game plan right now.”