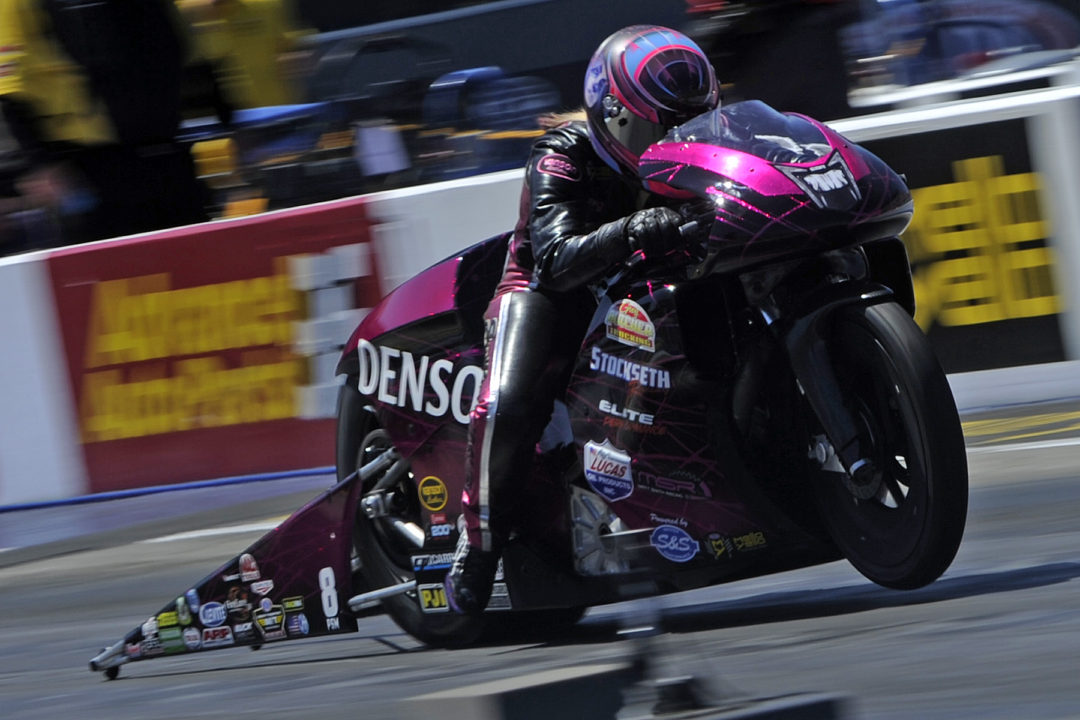 But this year, Angie says she’s better than she’s ever been. With her sights set on hoisting that world championship trophy in a few months, she’s holding nothing back during the next six races. She says it’s all about being in the right place mentally.

“You have to mentally prepare for this. You’ve had 10 races to test and prepare yourself for these last six races. I have the mentality that I have no friends on the track,” Angie says.

And she prides herself on having great reaction times, which she knows is a huge part of getting round wins, but she knows she has to do her job as a rider not just at the Christmas Tree, but the entire quarter mile.

And Angie’s not just chasing down the championship trophy, she’s looking to score her second national event Wally, too. Her first win came in 2014 at Epping, where the stars aligned and she raced, and beat, her husband, Matt, in the final round.

“Epping was a great weekend. As soon as I knew I’d be racing Matt in the finals, we already won. We knew that our team had won, and any time you can have an all-team final, it speaks volumes,” says Angie.

“I wanted to beat her,” Matt says. “I want to beat everyone that I line up against. But, I was really proud to see her win.”

It’s no secret that Matt and Angie spend pretty much all of their time together, and while they try to keep their racing and business lives separate from their marriage, it’s pretty much impossible.

“It’s just really hard to separate it when you’re together all the time,” Matt says.

But the two, now married for 10 years, have definitely taught each other valuable lessons over the years. 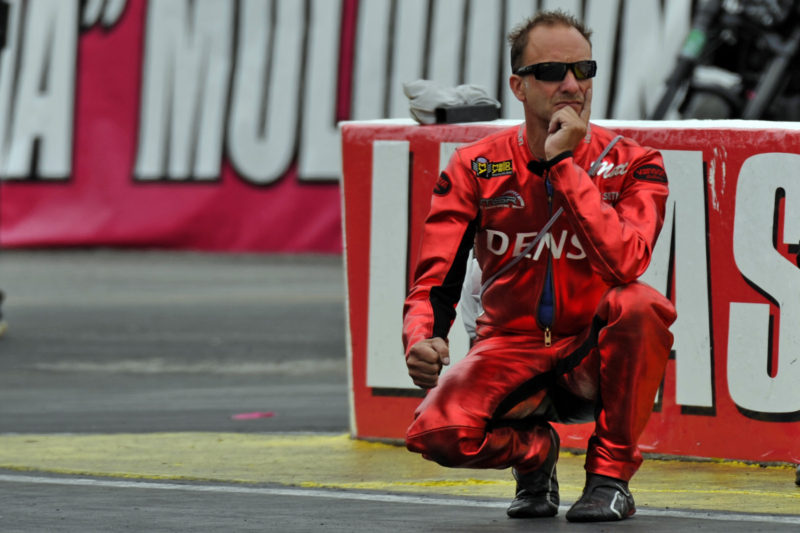 “Matt is definitely my toughest critic, but at the end of the day it’s made me a much better rider, and I feel like I’m at the top of my game right now and better than I’ve ever been,” Angie says. “He’s taught me how to handle defeat, how to make changes, and how to fix things and do better.”

And Matt says that Angie’s “taught me a lot about keeping my cool. I used to blow up a lot, and I’ve definitely mellowed out a lot over the last couple of years. I’ve learned to pick my battles.”

So what does the future look like for the king and queen of Pro Stock Motorcycle? It could include some seat time in four-wheeled race cars.

To no surprise, Matt says he wouldn’t mind following in his father’s footsteps and driving a Pro Mod. His dad, “Tricky” Rickie Smith, who’s known as one of the greatest doorslammer drivers of all time, currently competes in the NHRA Pro Mod field.

“I would love to run Pro Mod,” Matt says. “I’ve driven Pro Mod cars a few times, and would love to do it more. It’s just something different. You feel like you’re going faster on a bike because you’re on two wheels, but the cars are really fun to drive.”

As for Angie, we may see her one day behind the wheel of a nitro-burning Top Fuel dragster.

“I’ve always had a passion for Top Fuel dragsters,” she says. “I’d really love to go 330 mph in three seconds. I’ve thought about getting my Top Alcohol license, but bikes consume so much of my time that I haven’t had the opportunity or time to do it. But I’d love to race Top Fuel for at least one season. I think I could be really good at it.”

But for now, Matt and Angie plan to give it their all in the last six races on tour for Pro Stock Motorcycle class, with the plan to bring another championship trophy back home to North Carolina.