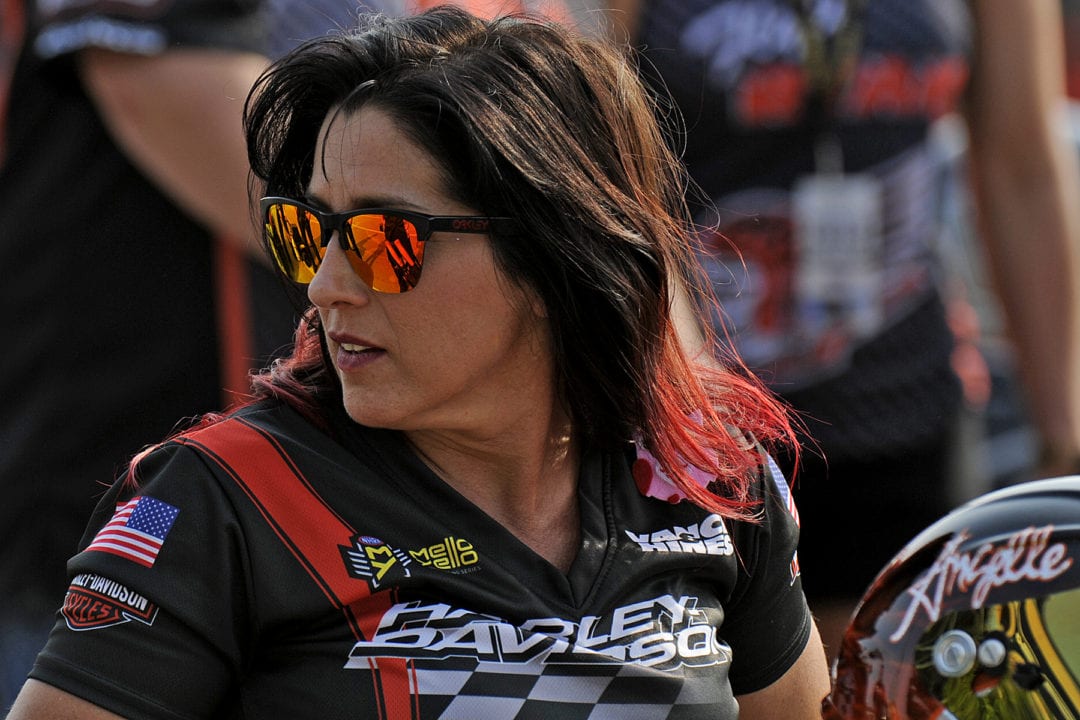 After a near seven-year sabbatical, she returned at the end of the 2014 season and began her hunt for her fourth title the following year, riding a Buell for George Bryce. Sampey earned the Wally at Englishtown in 2016; ironically, the same track she earned her last victory prior to that in 2007. She moved to Team Liberty with Cory Reed and the ill-fated Victory motorcycles last year. After a single season there, she announced the stunning news that a third Harley-Davidson would be fielded for her in 2019 with five-team champion and recent sweeper of the pro bike Western Swing Andrew Hines acting as her crew chief.

Being on the best team surrounded by the best riders and the best minds and equipment in the class sounds like a sweet deal. Until it kicks in that you’ve spent your entire career riding motorcycles that aren’t V-Twins.

“Very frustrating!” she said during a recent appearance on PRN’s Nitro Notes, regarding her rookie season with Vanes & Hines. “I’m on one of the best motorcycles at the race track and I’m very lucky to have the opportunity to ride it. We just debuted our new FXDRs and I absolutely love the new motorcycle. I’m just not performing where I need to as a driver to get the ET out of it that (teammate and four-time class champ) Eddie (Krawiec) and Andrew are getting out of theirs. It’s just something totally new for me.”

That’s not to say she’s not getting the hang of it. While Hines earned his seventh win of the year during a weekend seeing him also earn the victory in the Mickey Thompson Pro Bike Battle, Sampey was able to get past Krawiec in the first round of eliminations, an impressive win for anyone in the field.

Given the merry-go-round of scooters she’s been on since 2014, she can be forgiven for having difficulty adjusting. In just the time she’s been back, she’s raced a Buell, the Victory, and now a Harley. The Suzuki she raced early in her career was the easiest for her with the V-Twin providing the most challenges.

“Riding one style of bike my whole career would’ve been easier, but this way was a lot more fun.”

In addition to wearing a target on the track due to her status both as a multi-time champ & a Harley-Davidson rider, she now takes the slings and arrows hurled by the competition off the drag strip. Three-time and defending PSM champ Matt Smith announced in a Facebook video last week he was considering selling his entire operation due to what he considers an unfair advantage provided to the Screamin’ Eagle team by NHRA. 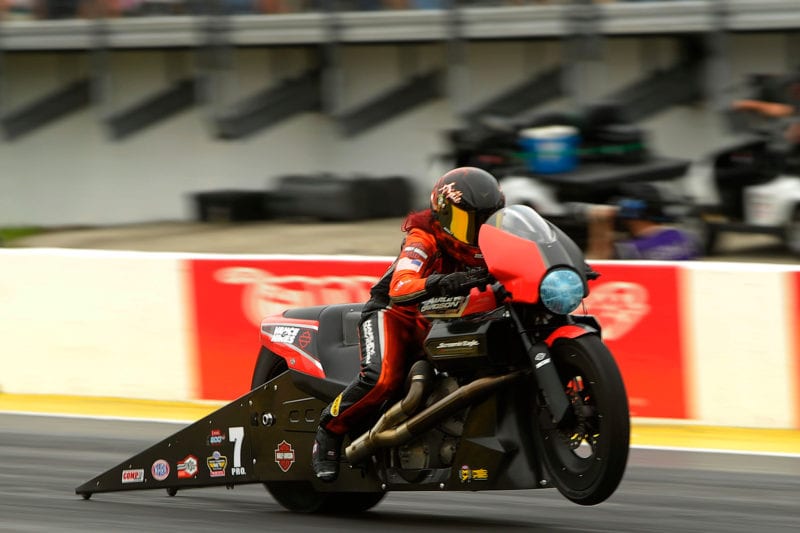 Water off a duck’s back for Angelle.

“My team is so professional, they have told me now that I’m wearing the colors, I’m going to have a target on my back,” Sampey said. “We just try to let it go in one ear and out the other and stay focused in our lane and do our thing and that’s why they’re so successful.

“A lot of things that are said about this team are so not true. I didn’t know all the truths until I got on this team and now I understand how they are victorious the way they are. I understand how strong they are now. I know the truth about what NHRA allows and doesn’t allow. There are a lot of things about the Vance & Hines teams that are straight-up lies. I wish I could be more outspoken about it.”

More importantly to Sampey, defending Hines because he’s her crew chief and teammate is secondary to the fact he’s an incredible rider and racing talent.

“One of the things I hate is when people try to take away Andrew’s natural ability,” she said. “That man, he has ice-cold blood running through his veins. Nothing gets to him. He’s not No. 1 qualifier and he still wins the race. He’s not the fastest bike every Sunday, yet he still manages to pull off the win. I don’t want anyone to take that away from him.