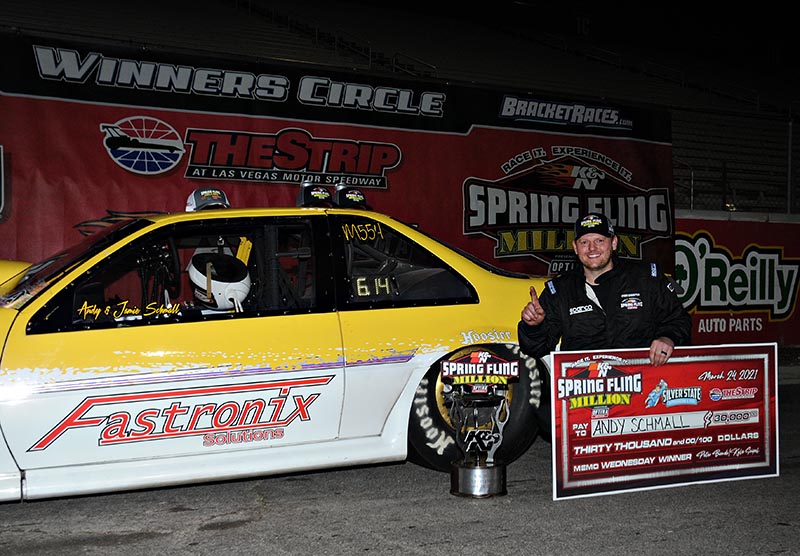 Day two of the K&N Spring Fling Million presented by Optima Batteries saw over 400 racers battle for the Silverstate Refrigeration $30,000 trophy. With time trials completed on Tuesday, Wednesday opened at 8.30am with first round of eliminations in the Gearwrench Pro class.

After battling a stiff headwind on Tuesday, the wind swirled early on Wednesday before eventually growing still late in the day. The everchanging weather challenged the huge field of 429 entries that made the first-round call. The talented field, which included racers from over 30 states, battled throughout the day for a shot at a $30,000 payday.

As day turned to night, the field narrowed quickly with only ten racers advancing to round seven. Andy Schmall and Dennis Paz opened the round with the Gearwrench Pro class final. The winner would earn a $500 bonus and would join the Super Pro class in the quarterfinals.

In the opening pair of round seven in Super Pro, Williams turned it red to Shipp. Bill Botelho advanced in his Grand Am when Phil Unruh left -.010 early in his roadster. Tim O’Moore, coming off a huge victory over Hunter Patton in round six, used a .002 to .036 reaction time advantage to defeat Dye who broke out in the loss. In his second entry, Williams paired a one over 4.891 to a .015 light to stop Chun.

The quarterfinal round opened with Randi Lyn and Gary Williams going head to head once again. For the second consecutive round, Shipp advanced when her .004 to .020 reaction time was good after both racers were one over their respective dial-ins. Schmall represented the bottom bulb crowd well after driving his Beretta past Botelho.  Andy laid down .006 total beside Botelho’s .019 light and dead on 4.94 lap. Tim O’Moore earned the bye to advance to the semifinals.

In the semifinal round, Schmall earned the bye to the final courtesy of his .002 reaction in the quarterfinals. In the other pairing, Randy Lyn posted another .004 light to advance to the final. Her .004 dead eight lap more than handled O’Moore’s .014 reaction and .02 above 5.356 effort.

With the victory, Andy Schmall earned the first Spring Fling Million trophy of the week along with a custom Spring Fling Sparco driving jacket and a $30,000 payday. 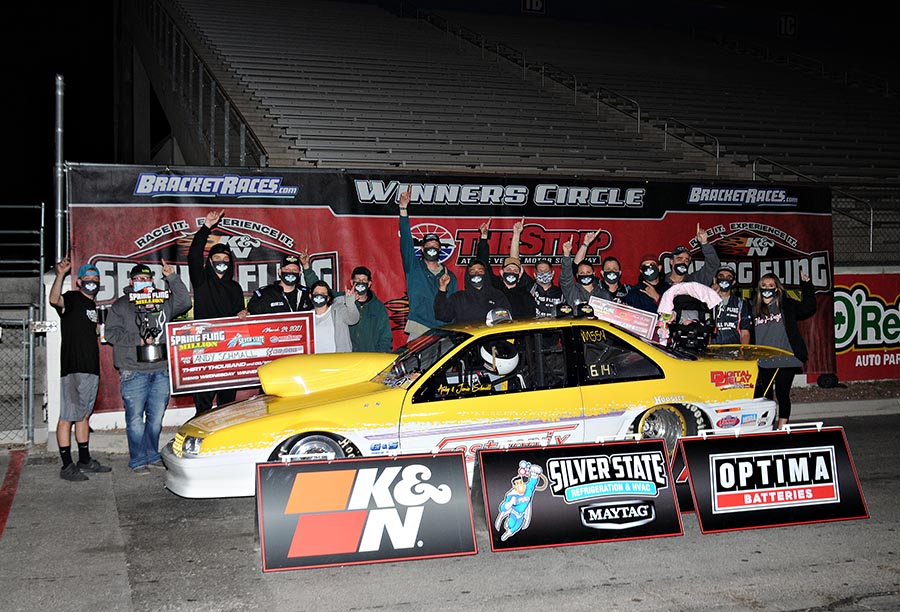 Racing continues Thursday with the Moser Engineering Thursday $30K as we move closer the to the Friday Spring Fling Million main event.

You can follow all the action from the K&N Spring Fling Million live at www.bangshift.com thanks to JEGS and Hoosier Racing Tire.