Four-time NHRA Pro Stock world champion Greg Anderson is hoping a trip to a track where he and his team have had great success in the past will provide a nice jumpstart to his 2013 season, and put his Summit Racing Equipment Chevy Camaro back at the top of the points order.

After a first round loss to Greg Stanfield at the season-opening O’Reilly NHRA Winternationals at Pomona and a semifinal exit at the NHRA Arizona Nationals in Phoenix, Anderson says his team is getting closer to returning to the top form that led the Ken Black owned unit to claim six of the last 10 world championship titles in the 200-mph factory hot rod category. 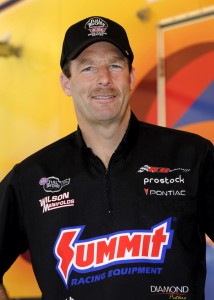 Anderson, who was the runner-up to Edwards at last year’s event in the Swamp is a two-time winner at the Amalie Oil NHRA Gatornationals with his last victory there coming in 2007. He says the overall competition level in the category has become very stout in recent seasons. The uptick in performance by other teams has put a high premium on the driver, he says.

“There are just so many good cars out here that you are going to have to find a way to be very, very good on the tree, or it will be really tough to win out here this year,” Anderson said. “Pro Stock is tougher than ever, and we’re continuing to work on finding the consistency and performance that we know we will soon have with our Team Summit Camaros. It’s very important that I do my job as a driver.”

Anderson enters the event in a tie for seventh in the points standings. He says his effort in Phoenix was a step in the right direction, but final rounds are his ultimate destination.

“We aren’t happy with getting to the semifinals,” Anderson said. “We want our Summit Racing Chevy Camaros in the final round. We have to become more consistent so that we can make that happen. The bottom line is that we need to find some more performance.”

His Summit Racing teammate Jason Line is a four-time winner at the Gatornationals, and until last year Line had a stronghold on the title, winning there three straight seasons from 2009-2011. So Anderson knows his team has what it takes to win at the popular and tradition-rich NHRA East Coast opener.

“We’ll be doing everything we can to find a way to make these Summit Racing Camaros better for Gainesville,” Anderson said. “I have a lot of faith in this KB Racing team, we have a great group here, and I know we’re on the way to where we should be.”