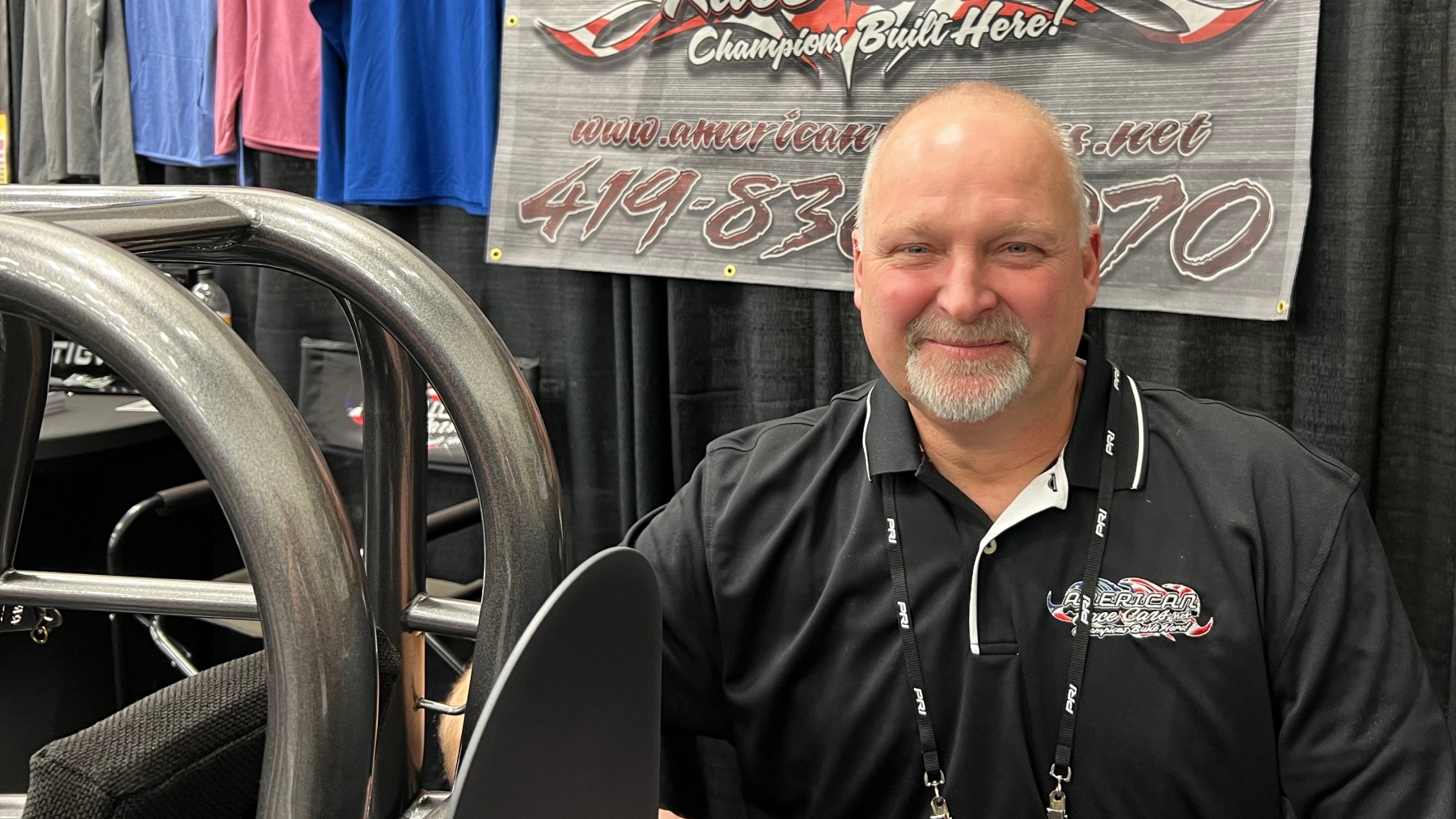 Noticing an opportunity to innovate in several areas, Travis Colangelo and his team at American Race Cars went to work improving the time-tested dragster chassis design used in big-money bracket racing and throughout sportsman racing. Those improvements – including front and rear suspension developments and an adjustable-length steering column – were on full display in the American Race Cars booth at the Performance Racing Industry (PRI) Show last weekend.

“We’ve been building cars – everybody in general – has been building cars for the last 50-60 years and we’re all doing the same thing,” Colangelo said as he started to explain the story behind the new rear suspension setup for American’s swing-arm, uni-shock design 4-link dragster. “The first guys that started doing it put rod ends on the car. They needed some way to adjust the rear end, so that’s what they did because that’s what was available. So the next guy does it, the next guy does it, the next guy does it because it does work. But the cars they built before were going quite a bit slower, so there wasn’t a whole lot of twisting.

“As cars went a little bit faster, they started changing the top 4-link bars, putting some preload in it,” Colangelo continued. “It really works when you do preload. The problem with preload that most people don’t understand is you’re actually trying to break stuff when you preload it. You’re holding it in one spot and you’re twisting it in the other spot. What you’re doing in a sense is trying to rip the brackets off the housing, off the chassis. You’re trying to break the rod ends, and/or the bolts.

“Once we start figuring out that we’re doing that too much, we start adding antiroll to the car,” Colangelo added. “The antiroll is great, but the problem with that is you start twisting it. Now you’re shoving one side of the car up and pulling the other side down to stop the twist. Now you have the shock raised up. Now you have the 4-link bars shortened up, putting load in it, and now you added an antiroll to it also and you’re trying to take the twist out of the car. So instead of fixing the problem, we just keep putting a Band-Aid on and we keep twisting and twisting, putting stuff in a bind.” 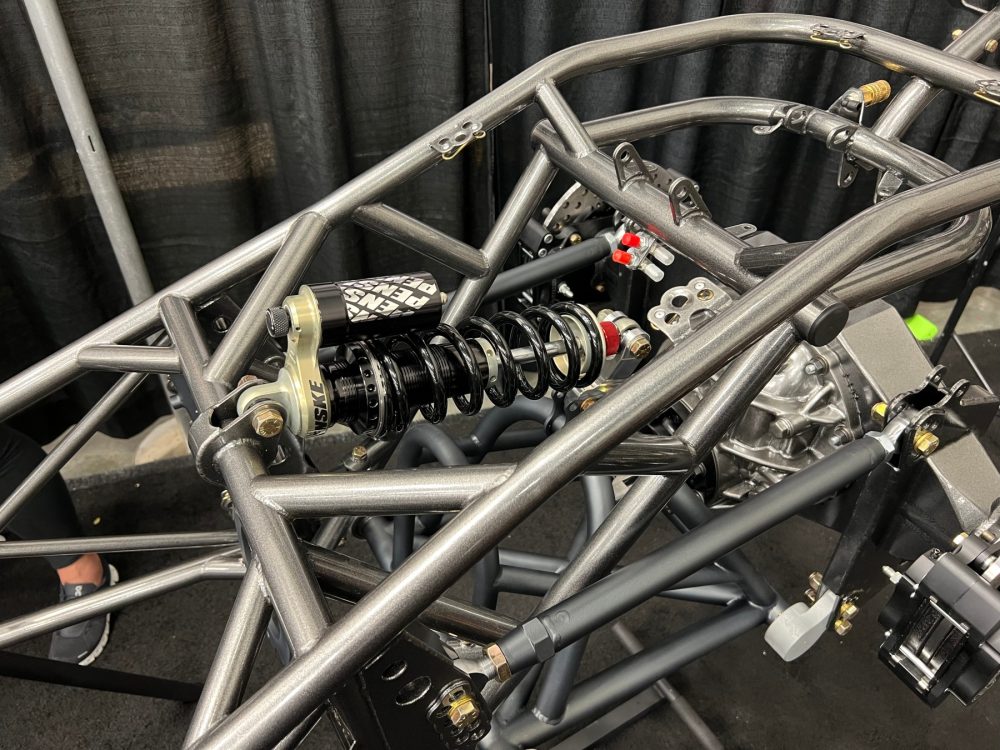 “I came up with a spherical bearing that’s rated for over 80,000 pounds of force. They’re used in earth movers and heavy equipment. It’s just crazy how strong they are,” Colangelo said. “So we machined some pockets out of 4150 and put the bearings in, so now this rear end can run in complete neutral. Nothing is in a bind. The only way this thing can go is straight up and down. We machined it so it has five-thousandths side clearance. There’s no need for an antiroll, no need for a wishbone, no need for any of that stuff. The only thing it can do is go up and down.” 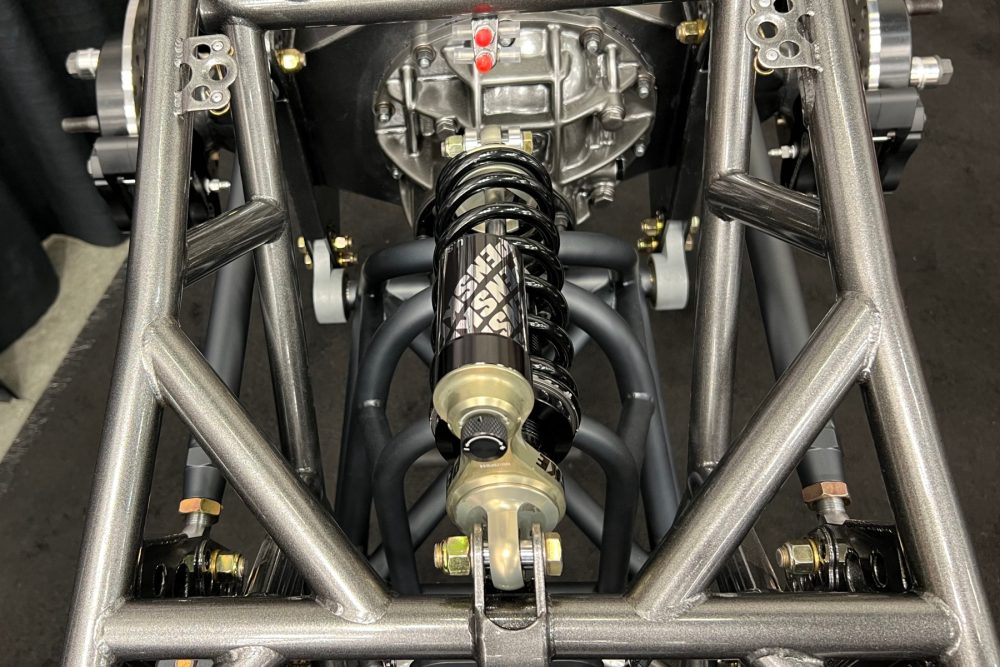 Colangelo has been involved in bracket racing for decades, and between his experience as a racer and a chassis builder, he’s seen cars pushed to new limits with more powerful engines leading to harder launches. His goal with this new car is to improve the chassis to catch up to performance trends.

“The average now is 4.30s. Ten years ago, it was 5.20s. It’s evolved,” Colangelo said. “The motor combinations, converters, and transmissions have come so far in such a short amount of time. There are so many great companies building horsepower that it’s very easy to obtain the horsepower. We’ve never done anything to the chassis to make them stronger and faster. They’re obviously a 6.00 spec on the chassis, so they’re SFI everywhere in the driver’s compartment, but other than that, no one really cares.

“That’s where this comes into play,” he continued. “I’ve seen some rod ends break, and I think the failure is because everything is in such a bind. It only goes so far to where something has to give. What we’re doing is taking that out of it completely. It’s double bolted. The brackets are steel machined out of 4140. That’s where I think this is going to be big.”

While the new rear end configuration is available on any new dragster rolling out of American’s shop in Port Clinton, Ohio, it’s also available as a bolt-in kit for customers with an American car built in 2013 or later.

“If you have a 2013 or newer American right now, I can send you this package and in a couple 3-4 hours you could bolt it onto your car – no welding, cutting, grinding,” Colangelo said. “You get the whole new swing arm with the adjustable shock mount. Use your shock. You get top 4-link bars because this is longer. So you get new rod ends in the top 4-link bars that doesn’t see the load that the bottom does, but the bars will be new, the rod ends are new, and you’ll get a new driveshaft with this setup. Now, any guy in his garage can pull the rear end out, switch this system over, and be ready to go fast safer in a few hours. I don’t have to cut on your car, I don’t have to rework anything, I don’t have to do anything because our brackets have been the same since 2013.” 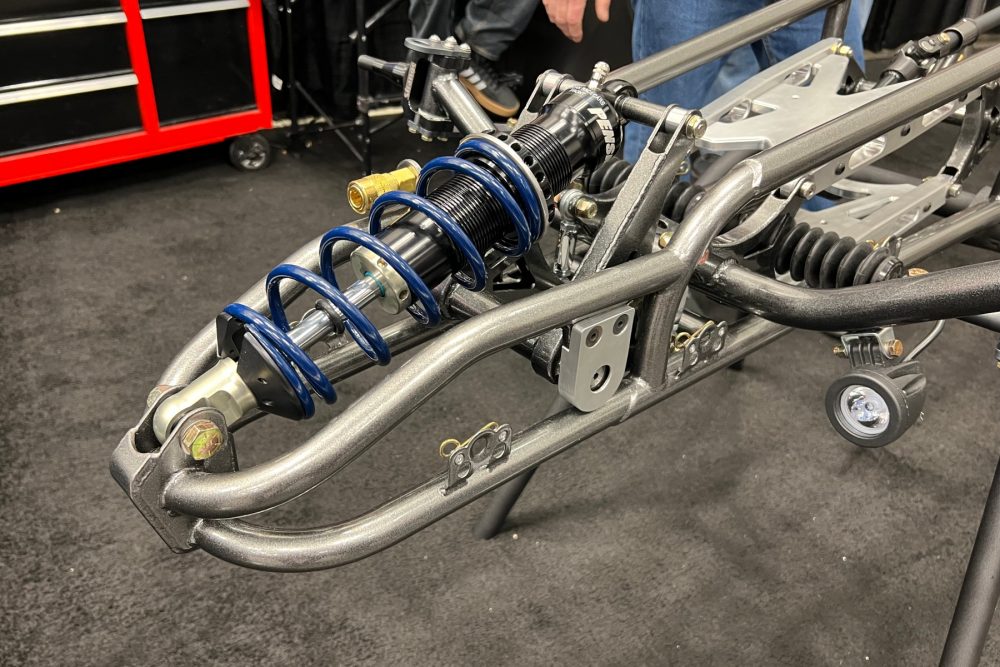 Another area of improvement in this new car is the front suspension, a design that came about when Colangelo challenged his team to come up with a front suspension package with one caveat in mind: “We never lose caster throughout the travel.”

“It’s almost similar to a 4-link on the rear end where these four arms are machined exactly the same with some needle bearings in them,” Colangelo started to explain. “So throughout the whole range of motion, this thing never loses caster. It’s one axle, one shock. You can adjust the ride height, but you can’t adjust the caster or camber because you should never have to change that. It’s fixture set. It’s done. This should be the way to go.”

Like the rear suspension, the front suspension package serves multiple purposes. Along with performance benefits, it will also help reduce structural and cosmetic wear-and-tear.

“I think there’s a need for it,” Colangelo said. “I think it’s really good for keeping the wheels in the beams when they leave. I think it’s great for protecting the body through the pits. Some of the pits are a little rougher than others, and when you drive through, it beats the hell out of everything. I think it’s going to be huge in a lot of different aspects. Even fatigue on the rest of the car because you’re not asking the car to bounce or flex, you’re asking the suspension to do the work. Now you actually have suspension to let it travel on both ends of the car.” 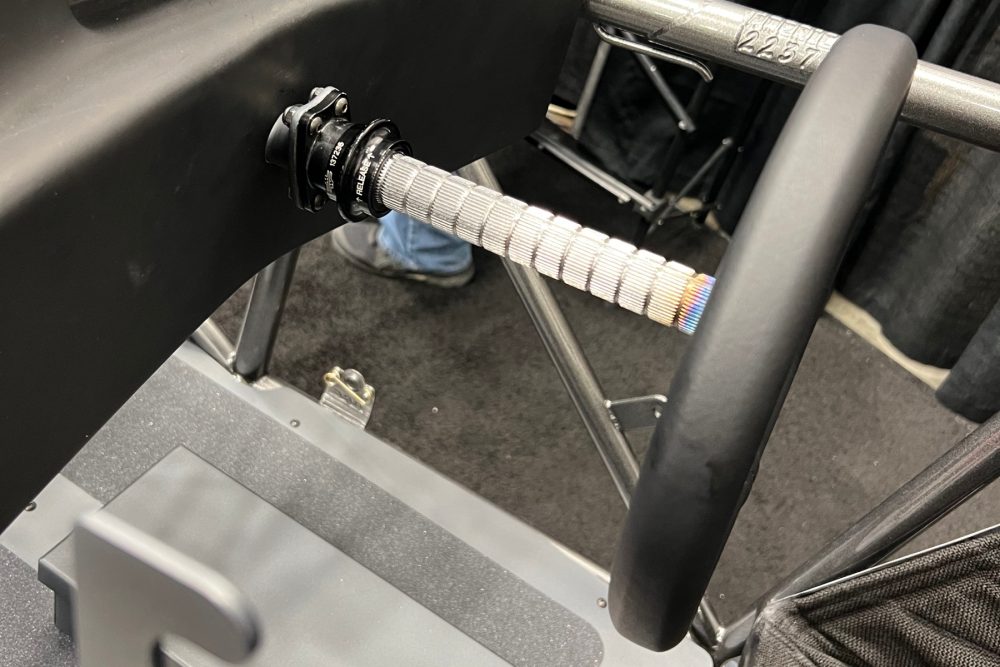 The third new feature on the car is an adjustable-length steering column to avoid the pitfalls of traditional removable steering wheels. The steering wheel is permanently attached to the column, which slides in and out through the hub. Notches every half-inch on the column allow the driver to move the wheel to get in and out of the car, to adjust for different driving styles, or to more easily allow different drivers to enter the same car.

“When I raced Quick Rod or Super Comp, I’d push the wheel further away from me and I would pull myself up on the wheel to get that .400 Pro tree reaction time. Bracket racing, I would pull it all the way back to me where I could sit back comfortably, relax, and hit the tree and focus on that,” Colangelo said. “It’s two different styles of driving, but moving the wheel quickly and easily, I could run 8.90 then I could run the bracket race at the same race without changing anything. It helped a lot. If you can get comfortable in the car, you’re going to win races. That’s where this came about.”

Racers stopped by the American Race Cars booth at the PRI Show all weekend to check out the new options. The American team is quickly working through its waiting list for 2023 cars, and Colangelo believes many of them will feature the new options.

“I think it’s going to blow up pretty big,” said Colangelo, who thanked his employees and customers. “We’re very fortunate that we have a lot of return customers. Our waiting list is pretty long. When they see this, I think this is really going to change the game and people will get in line and order it because it’s definitely going to be safer and stronger. I think it’s going to be more consistent too. Eighth-mile bracket racing is so tight. Every little bit you can get matters. It’s incredible. Your stuff has to be perfect.”