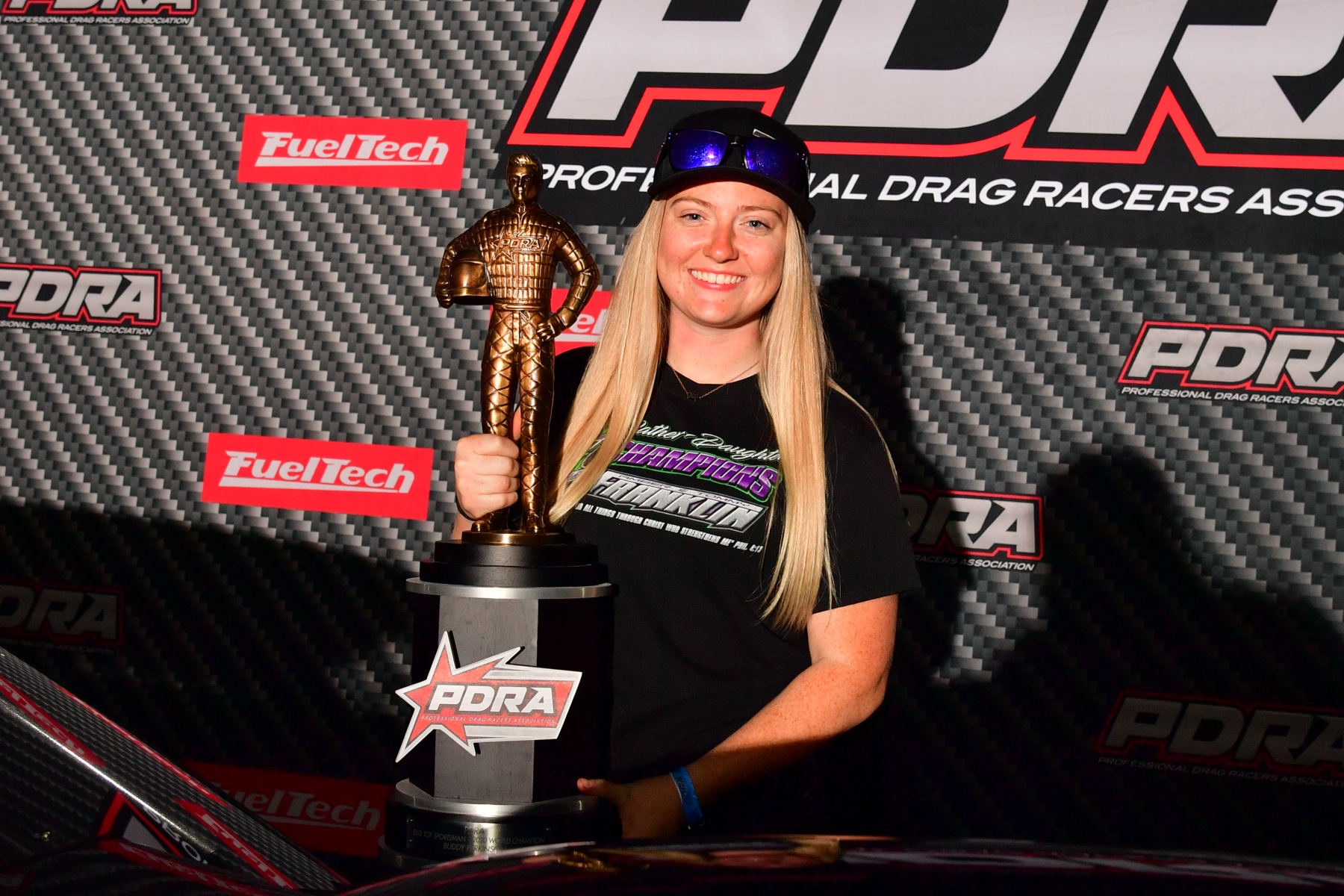 As a past Professional Drag Racers Association (PDRA) Pro Jr. Dragster world champion, Amber Franklin knew what it would take to win a world championship in her first full season of $hameless Racing Pro 632 competition. The second-generation PDRA champion used a combination of determination, consistency, and strong performances to clinch the 2022 Pro 632 world championship.

Franklin’s Pro 632 career started at the last two races of the 2021 season. When she raced to the final round at both events, Franklin and her team’s goals changed from merely making decent passes and winning a round or two to winning races and pursuing the 2022 championship.

“We came out stronger than we anticipated,” said Franklin, the 2017 Pro Jr. Dragster world champion. “That set the tone quickly for this year. We were looking for wins, then once that was accomplished, we knew the championship was something we could obtain.”

Franklin’s first win came at the second race of the 2022 season, the Vortech Doorslammer Derby presented by Stroud Safety at Beech Bend Raceway Park, where she defeated longtime friend Lexi Tanner in the final round.

Another win followed at the very next race, the DeCerbo Construction American Doorslammer Challenge presented by Callies at Summit Motorsports Park. While Franklin’s first win was special, her second win was even more meaningful. Just moments after watching her father, two-time Switzer Dynamics Pro Nitrous world champion Tommy Franklin, win the Pro Nitrous final, she had to strap into her car for the Pro 632 final round, where she defeated Walter Lannigan Jr.

“Norwalk was a big deal for us,” Franklin said. “That was probably the most pressure I put on myself all season, wanting to hold up my end of the deal. He accomplished his end of it and I needed to do my part of it. We ran good that weekend and we were running Walter in the finals, which is always a tough race. Getting that win was definitely special for us. That was the first time we won together.”

Franklin went on to add runner-up finishes at the North vs. South Shootout presented by Line-X and Iron Man Quick Connect Push Bar at Maryland International Raceway and the Summit Racing Northern Nationals presented by Penske Racing Shocks at Maple Grove Raceway. She clinched the championship after making her first qualifying pass at the Proline Racing Brian Olson Memorial World Finals presented by ProCharger at Virginia Motorsports Park. She also reached the final round at the non-points-earning Summit Racing PDRA ProStars at VMP. 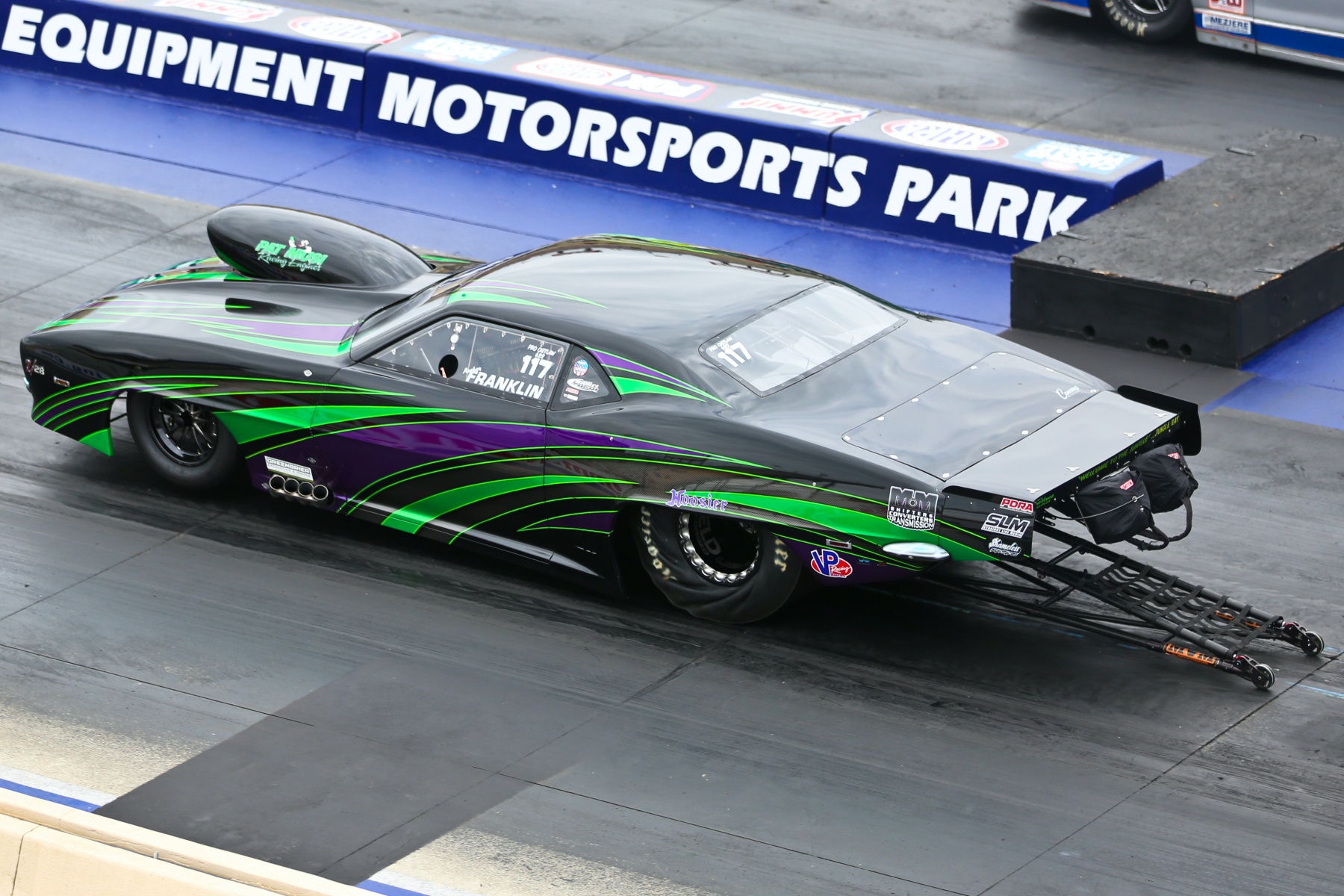 Franklin’s car has a championship pedigree of its own. It’s the same Bickel-built ’69 Camaro her father drove to back-to-back Pro Nitrous titles in 2016-2017. Known as the “OG Jungle Rat,” it now sports a Musi 632ci engine. It was a “dream come true” for Franklin to drive the car and add another championship to its resume.

“I think it adds a whole different meaning to the championship itself,” Franklin, 20, said. “I watched my dad win championships and races in that car. I have pictures and posts from previous years saying, ‘I’ll see this view one day’ or ‘I’ll race this car one day.’ Being able to accomplish that and not only win a race in it, but then to get a championship in that same car, it has a lot of meaning to me. Growing up in the door car realm, it’s something I’ve always dreamed of doing. Being able to accomplish it at a young age means a lot.”

While Franklin’s goal is to eventually move up to Pro Nitrous, she’s not rushing into that step. Instead, she’s eager to continue racing in the ultra-competitive Pro 632 class.

“The competition is definitely tough and we have some good drivers in the class,” Franklin said. “I’m excited to see where next year goes. We’re not stopping here. We’re not just satisfied with what we’re doing. We’re always working to see what else we can find to be a little better for next year. I think we’ll find some of that over the winter and hopefully go back-to-back.

“I’d like to thank the good Lord above,” Franklin added, “my parents [Tommy and Judy], Jeff Pierce, Blake [Denton], our crew guys, my sister [Ashley], Jerry Bickel Race Cars, Pat Musi Racing Engines, Hoosier Racing Tires, and M&M Transmission. This championship is dedicated to my grandpa, who passed away in July.”

Lannigan, who drove the Musi-powered $hameless Racing ’68 Camaro that Wes Distefano drove to the last two Pro 632 world titles, was the championship runner-up. Like Franklin, he had no first-round losses. The class veteran reached the final round at three races and was still in competition at the World Finals before it was canceled due to rain.

The PDRA will celebrate Franklin and the other 2022 world champions at the annual PDRA Awards Banquet on Friday, Dec. 9 during the Performance Racing Industry (PRI) Show in Indianapolis.