Top Fuel racer Khalid al-Balooshi powers into the Lucas Oil NHRA Nationals in his second season in the NHRA Mello Yello Drag Racing Series and is poised for more success in the 8,000-horsepower category.

Al-Balooshi raced his Al-Anabi Racing dragster to his first win of the season in July at Norwalk when he defeated Doug Kalitta in the final round for his second career victory and first since Reading in 2012. 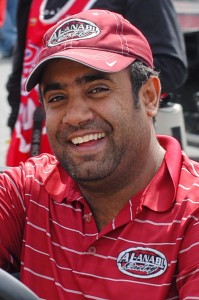 “We had been looking to win a race for a long time,” al-Balooshi said. “Since last season when we won the first race, I kept thinking, ‘When will we win another one?’ When you get that feeling about winning the race, it is something good that you want to do again and again and again.  Finally, I did it this year, but I hope we keep doing it more and more.”

Al-Balooshi, currently sixth in Top Fuel points, also raced his Jason McCulloch-tuned dragster to a final round appearance in Englishtown, but came up short to his teammate, series points leader Shawn Langdon, in that final round appearance. Team manager Alan Johnson guides both drivers during the season and has influenced and inspired alBalooshi.

“When you win, you do something very important,” he continued. “Especially when you work with a big team like Al-Anabi with Sheikh Khalid and Alan Johnson.  You keep thinking this team wins championships and that you want to put the team back in the same position where the team has been before.  We are having a good season, and I am having fun this year.”

Al-Balooshi and all of the teams in the NHRA Mello Yello Drag Racing Series are determined to earn a victory at the Lucas Oil NHRA Nationals, Aug. 15-18, the 17th of 24 events in the 2013 season and the penultimate race in the 18-event regular season. Last season, Morgan Lucas (Top Fuel), Ron Capps (Funny Car) and Erica Enders-Stevens (Pro Stock) earned victories at the event. ESPN2 HD will once again provide television coverage of the event. 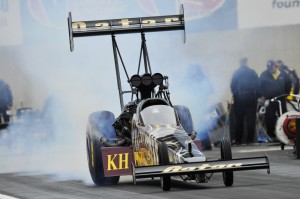 When al-Balooshi won the Norwalk event he not only took home the coveted NHRA Wally, he also earned the opportunity to compete in the Traxxas Nitro Shootout for Top Fuel at the Chevrolet Performance U.S. Nationals. This lucrative bonus event features the finest eight competitors in Top Fuel, and making the field was one of his goals going into the season.

“The Traxxas Shootout is very important for me,” he said. “I realized watching it last year that it was something important because these are the eight fastest cars in the show.  You need to be one of these cars, and our Al-Anabi team is one of the fastest cars.”

Al-Balooshi, the 2011 NHRA Pro Mod Drag Racing Series world champion, is teamed with Langdon, who is having a career-best year with four wins. These teammates share information and Langdon and alBalooshi combine to make one of the most dangerous teams during eliminations.

“I ask him questions; One of the easy ones, I asked him about the burnout,” al-Balooshi said. “When I drove Pro Mod, when the track is hot, I make a short burnout – should I do that in Top Fuel?  I can ask Alan Johnson, I can ask Jason or I can ask Shawn. Shawn tells me when he drove Super Comp, he made a short burnout if the track was hot so he asked Alan if he should do that in Top Fuel. Alan told him go do his normal burnout and don’t think about the track.  Make the same burnout every time, so he helped me learn about that.”

“Shawn is also helping me learn how to stage the car and how to put the car in the groove.  One of the biggest things in this sport is putting the car in the groove and keeping it there until the finish line.  The car can be running good, but if it gets a little bit out of the groove, it will smoke the tires.”

Al-Balooshi will attempt to secure his first Brainerd win during the Lucas Oil NHRA Nationals and along with teammate Langdon, the duo will be two of the toughest cars in the field. Tony Schumacher has three wins at the facility and looks to rebound after two consecutive first round losses. Morgan Lucas, Antron Brown and Doug Kalitta also have wins at the historic venue and will again vie to hoist the NHRA Wally at the completion of the event.