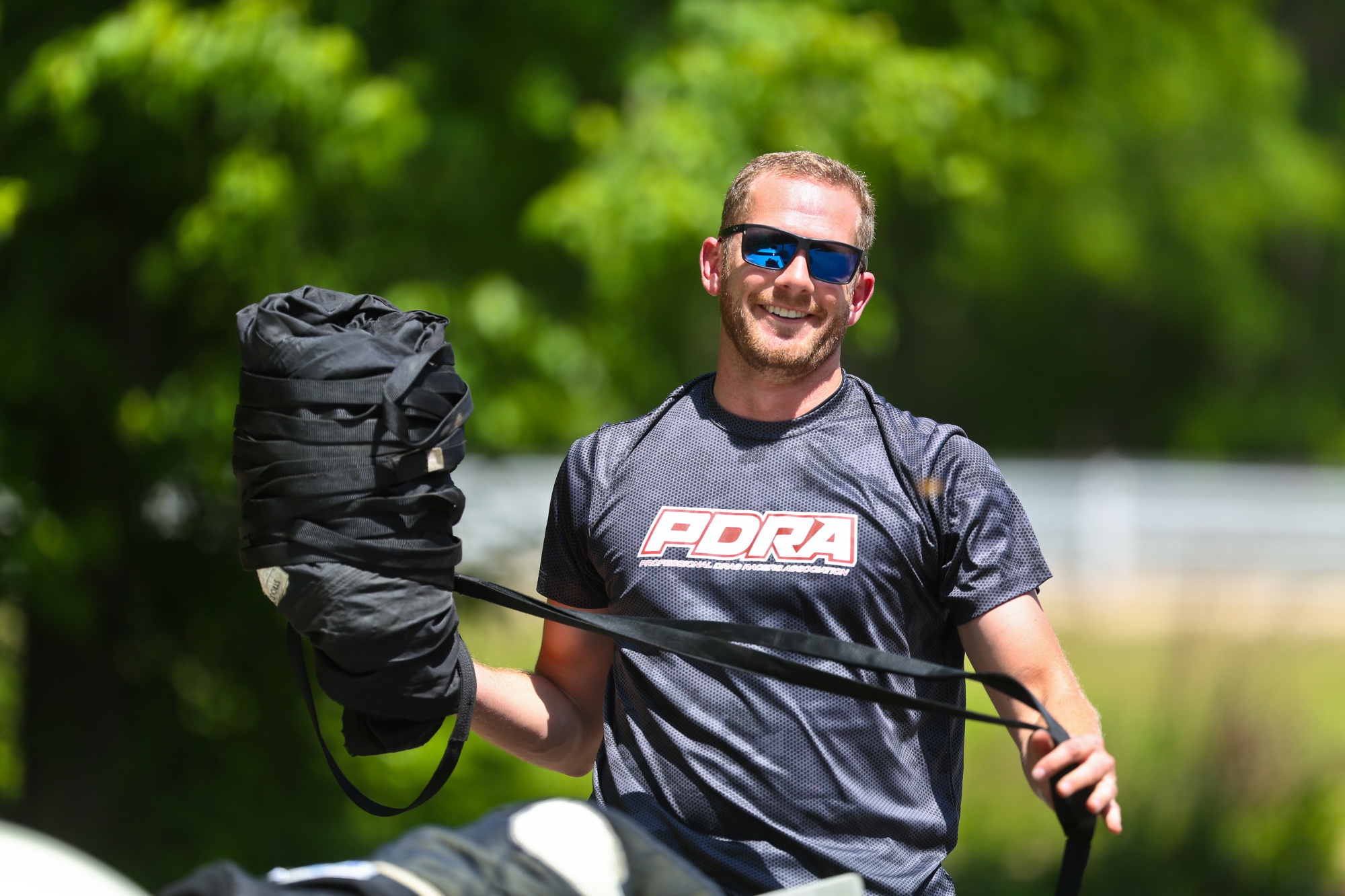 When Christopher Holdorf and his father, Chris, we’re looking to get into a competitive, traveling class, the PDRA’s $hameless Racing Pro Outlaw 632 class offered exactly what they had in mind. It gave Holdorf a place to get his feet wet in a fast doorslammer, but it was a fairly new class with a lot of room for growth. Now going into his third full season in the class, Holdorf is ready to start winning races, and if all goes as planned, maybe even a championship.

Holdorf is coming off a strong sophomore season in his Black Flag Motor Sports ’53 Corvette. He nabbed a pair of runner-up finishes in PDRA competition, ending up with a third-place finish in the championship points. It was his first full season with the nitrous-assisted ’53 Corvette, which he debuted halfway through the 2018 season.

“Getting that first full season under our belt with the new car was a plus, for sure,” Holdorf, 31, says. “It worked out pretty well. There were a couple spots where I would’ve rather finished first, but I guess you can’t complain about second.”

Black Flag Motor Sports started with the team’s black ’53 Corvette driven by Walter Lannigan Jr., who finished fifth in points last season. He won the $7,500-to-win $hameless Racing Shootout at the PDRA Northern Nationals last year, but it was a non-points special event. The two teammates regularly square off in competition, resulting in some entertaining back-and-forth discussions in the pits.

“It’s a good competition between my dad and I,” Holdorf says. “We like to poke fun at each other and see who’s the better driver and better tuner, even though we are on the same team. It still makes it a friendly competition.”

With two cars comes twice the data. It’s a nice advantage, but the similarities between the two cars aren’t as distinct as one might think. They both utilize 632ci Nelson Competition engines, but the age and mileage difference changes the tuning approach for the two cars. 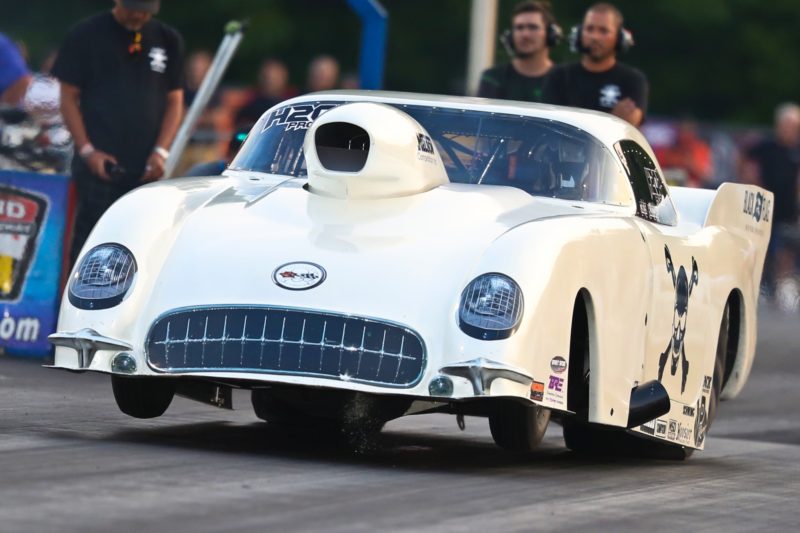 “It definitely helps if one car runs first and shakes the tires, we can make an on-the-fly adjustment with either tire pressure or bottle pressure to try to get the next car down,” Holdorf says. “We do have that as an advantage. Sometimes we try to run two different setups when we first get to the track on the test day, just to see where we’re at, then narrow it down from there. Both cars are a little bit different in age as far as the chassis goes. The white car has the newer chassis, so it tends to hook a little better so we can be a little more aggressive for that car. But they’re relatively close in performance.”

The Black Flag Motor Sports team is a tight-knit group made up of the Holdorfs, Lannigan, main tuner Mark Medeiros and crew member Alan Reynolds, who is also a mechanic at the Holdorf family’s C&C Pumping Services, Inc. concrete pumping company. Christopher’s stepmom, Leslie, stays back to manage the business during most races.

“It’s definitely a good time,” Holdorf says of working and racing with his family and team. “You get a lot of time to hang out. We actually race together and work together. We have a race shop that’s built onto our main construction office. These are the guys I see every day, whether we’re doing construction work or race car work. We’re always around each other, and it definitely gives you that time to hang out with your family.” 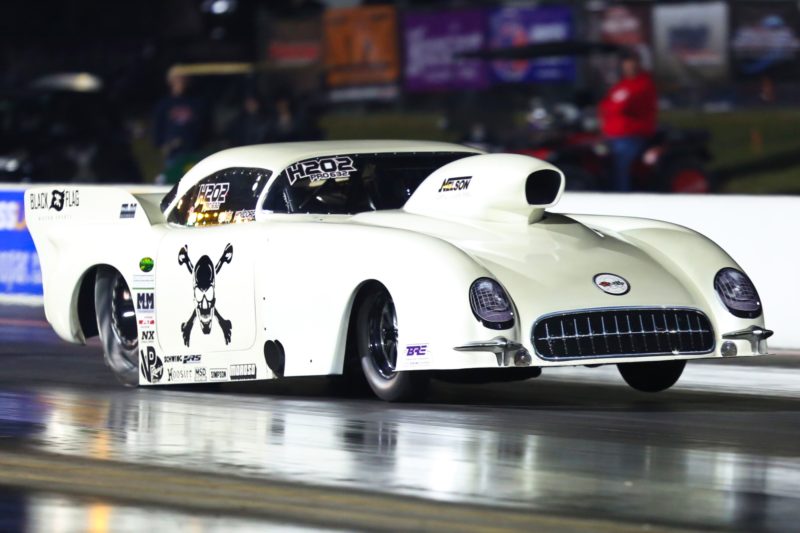 The concrete contracting firm specializes in industrial projects, ranging from high-rise buildings in Tampa and Orlando to pouring giant slabs for Amazon warehouses and distribution centers. They also handle jobs in the Disney and Universal Studios theme parks in Orlando. It can be a grueling gig, sometimes making a weekend at the races feel like a brief reprieve.

“Most of our work starts around 11 o’clock or midnight, so we’re night owls,” Holdorf says. “We run all through the night. When we get to the racetrack, we at least get to sleep a little at night because we’re not at work.”

Holdorf has also leveraged his connections in the concrete industry to develop sponsors for the two-car team. This season, DeWitt Custom Concrete will serve as the main sponsor on Holdorf’s white ‘Vette, while Full-Tilt Constructors will back the black car driven by Lannigan.

The new sponsors are a major factor behind Holdorf’s push for better performance this season. He has lofty goals, but with fresh, beefed-up power from Chris Nelson and Nelson Competition, Holdorf is up for the challenge. 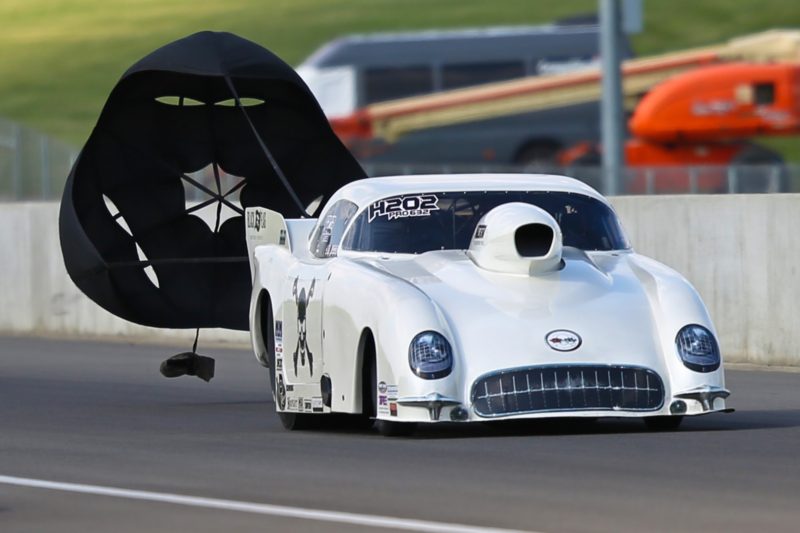 “I definitely want some first-place finishes,” Holdorf says. “I’m kind of tired of the runner-up. Obviously, the points championship is on my mind. We’d like to see a 1-2 finish. That would be spectacular. It’s definitely going to be tough with the amount of people and the amount of talent in the class. We want to keep working hard and producing out there so we make them look good and hopefully solidify some more sponsors.”

As Holdorf says, it’s only getting tougher to be competitive in Pro Outlaw 632, which is now sponsored by $hameless Racing this season. Two-time world champion Johnny Pluchino stepped away from the class over the winter, but there are several players ready to take his place. $hameless Racing driver Wes Distefano leads that charge after finishing second in points last year, while Lannigan, Tony Gillig, Jeremy Huffman and Jordan Ensslin are among the other challengers. A host of newcomers and drivers with revamped cars will add to the challenge of competing in the flourishing category.

“In my limited experience – this will be my third full year in PDRA and third year racing – from where we started and where I saw this class start to what it is now, there’s been significant advancement in the ETs of the cars,” Holdorf points out. “When we first started, I think if you were running a high 4.30 or a .40 you were a top contender. Now, if you’re not running a low .20, you’re left out in the back of the pack. It’s getting significantly more competitive. It’s growing, for sure. All in all, it’s just a really good class.”