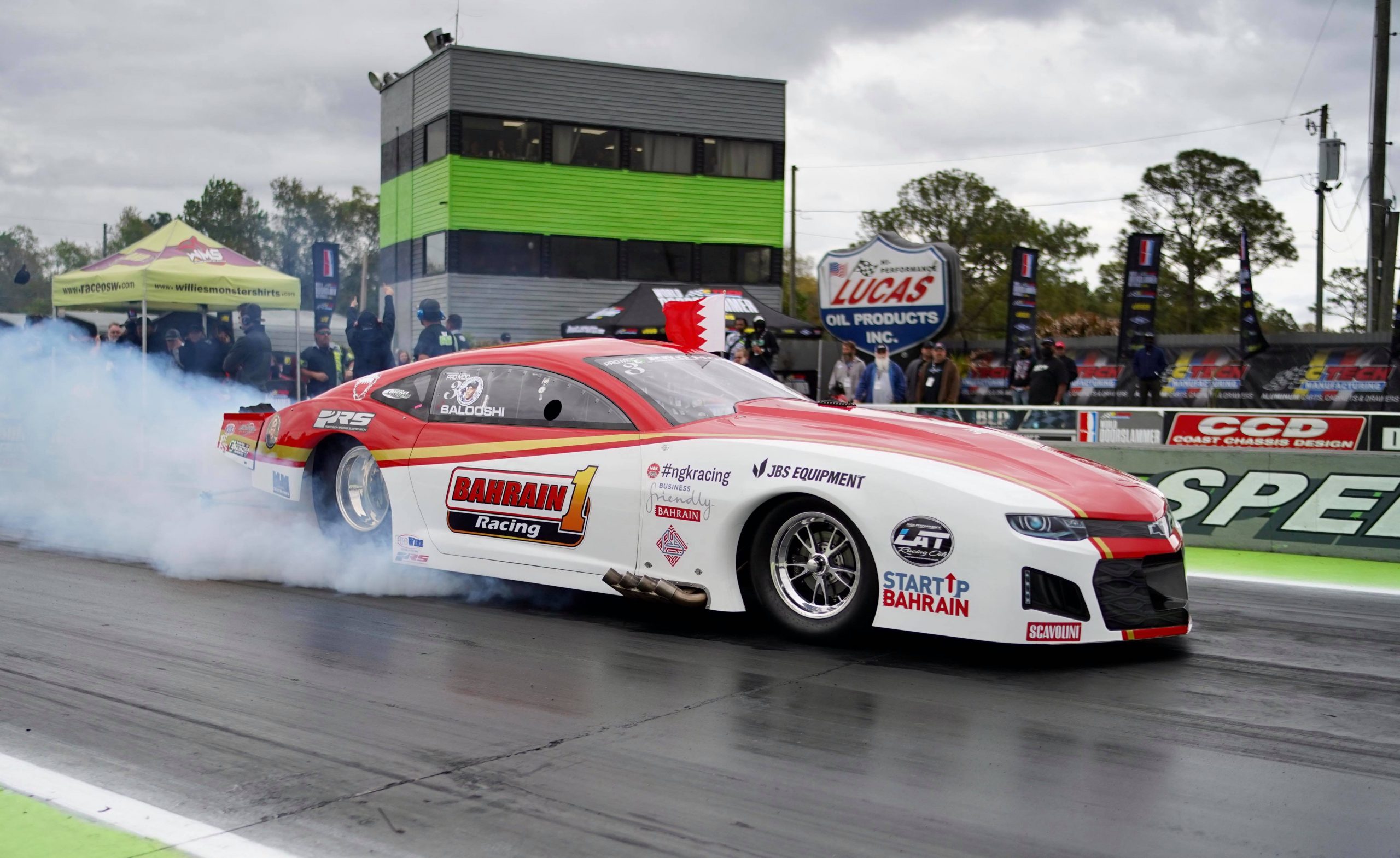 Khalid Al-Balooshi was happy to take the No. 1 qualifying spot in Pro Mod and grab the $1,000 top qualifier bonus thanks to his run of 5.659 at 251.25 from Friday in his ProCharger-powered Bahrain 1 Racing ’19 Camaro.

But more than anything, Al-Balooshi was simply pleased to see teammate Justin Bond get into the show. On the outside looking in heading into the final qualifier on Saturday, Bond jumped up to third with a stellar run of 5.726 250.64. That brought a smile to Al-Balooshi’s face knowing the team landed in two of the top three spots and enter Sunday’s eliminations with a strong chance to win the $50,000 prize.

“I am happy, but more than anything we put Justin Bond’s car in the show,” Al-Balooshi said. “We have two shots to race tomorrow and try to win. That’s what made us happy today. We were struggling a little bit, but we found what we needed to and we made some adjustments, and we’re both headed in the right direction.”

Bond credited standout tuner Brad Personett for dialing up the strong run in the clutch, which gave Bond, the top qualifier from the inaugural race a year ago, plenty of confidence heading into Sunday.

“We had a fast car last year and we made some changes over the winter. We were trying some different stuff and then when it came to qualifying we put went back to our old stuff and lost it a little bit,” Bond said. “The manual shifting was causing me trouble, but I’ve got a good group of guys and Brad is just great. Consistency is going to be key tomorrow, but I think we can do well.”

Jason Scruggs sat out the session and finished in the second position after going 5.704 at 252.76 on Friday and Brandon Snider, who finished second in NHRA Pro Mod last year, took fourth with a run of 5.745 at 250.46 in his new blown Camaro.

First-round matchups, however, will be determined by a chip draw for the first time in the class at the event. Pro Stock did it a year ago, but Pro Mod joined the mix in 2021, with the top 16 qualifiers drawing chips to set pairings for the opening round of eliminations.

Al-Balooshi and Bond continue to work closely together, and it appears both cars have found their rhythm at a key time. As for eliminations, Al-Balooshi knows his car has the performance, it’s simply a matter of consistency under pressure. 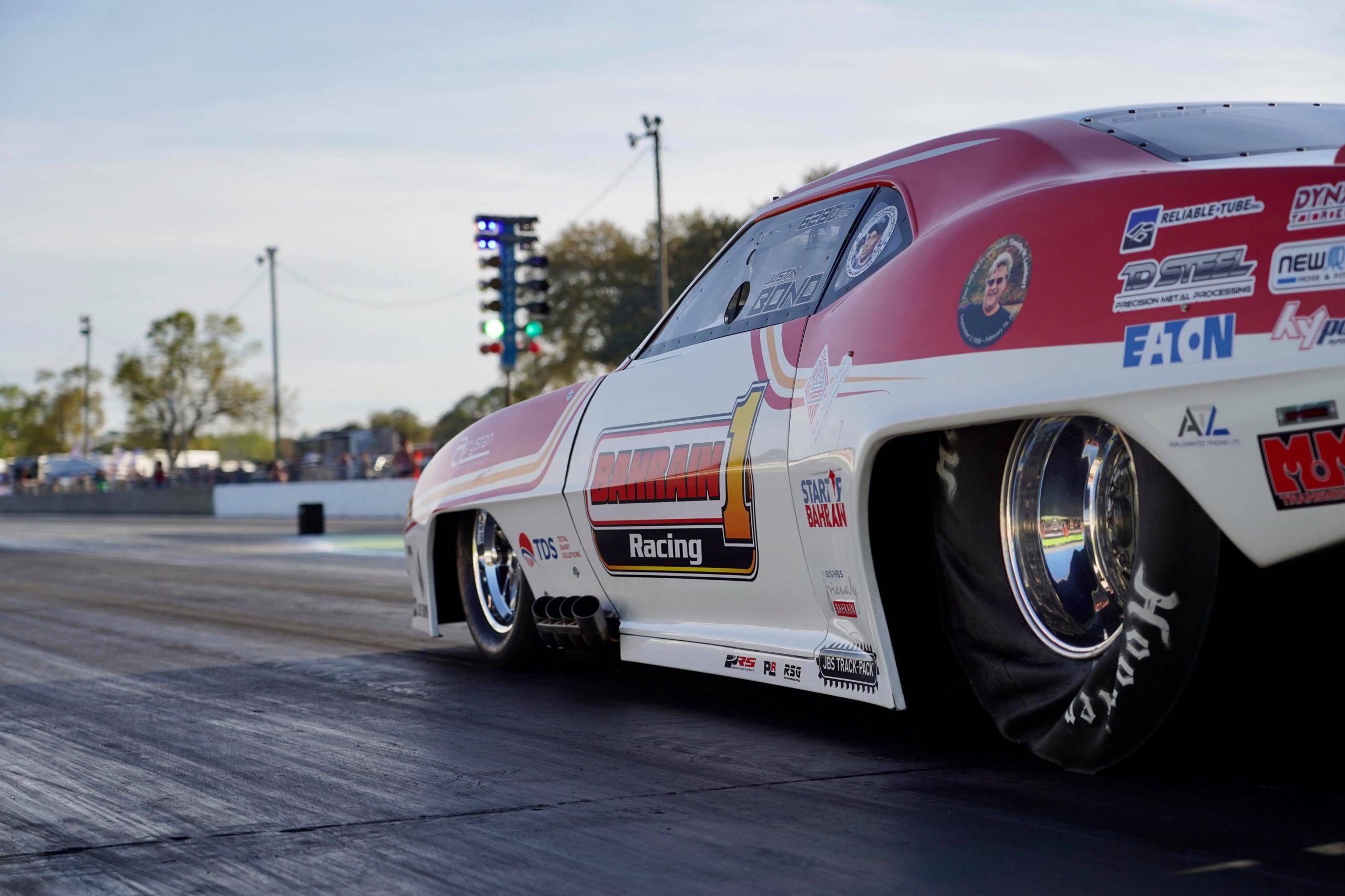 The Top Sportsman top 3 went unchanged from Friday’s two qualifying sessions. Cheyenne Stanley is No. 1 spot with a 6.154-second pass in his twin-turbocharged ’07 Mustang, but was unable to return for Q3 after tangled parachutes caused him to end up in the sand trap on Friday. Mike Lubniewski followed in the No. 2 spot with his 6.201, with Derrick Brown going 6.211 in his ProCharger-boosted ’14 Camaro to round out the top 3.

Bill Skillman remained in the No. 1 spot in Ray Skillman Auto Group Factory Shootout with a 7.78 at 178.24 in the Ray Skillman Ford Mustang Cobra Jet. David Barton improved to a 7.806 at 176.56 in his Barton Racing Engines ’17 Camaro to qualify No. 2. Former Pro Stock star Mark Pawuk moved down to the No. 3 spot in his Empaco Equipment Dodge Challenger Drag Pak with a 7.809 at 177.32. 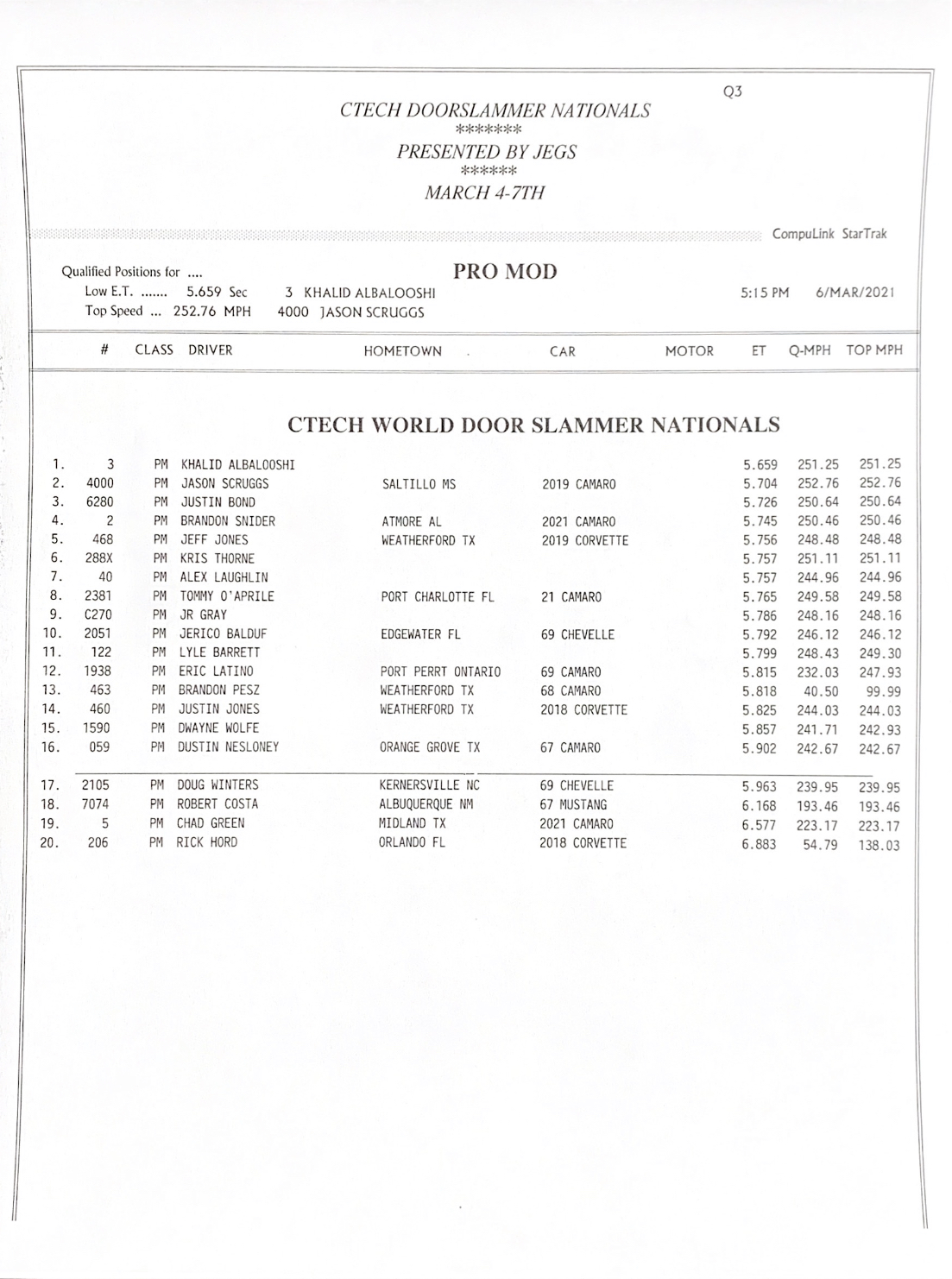 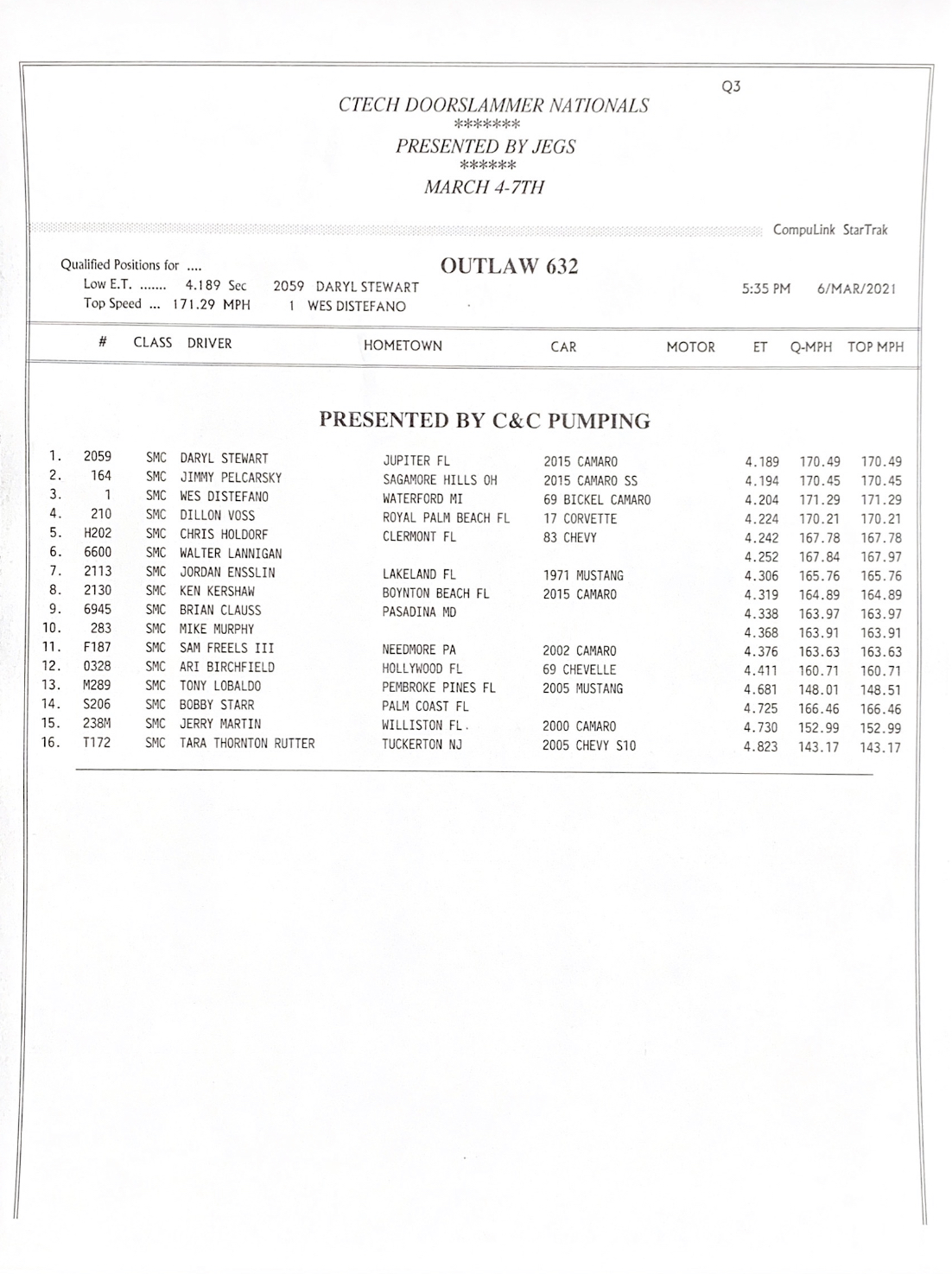 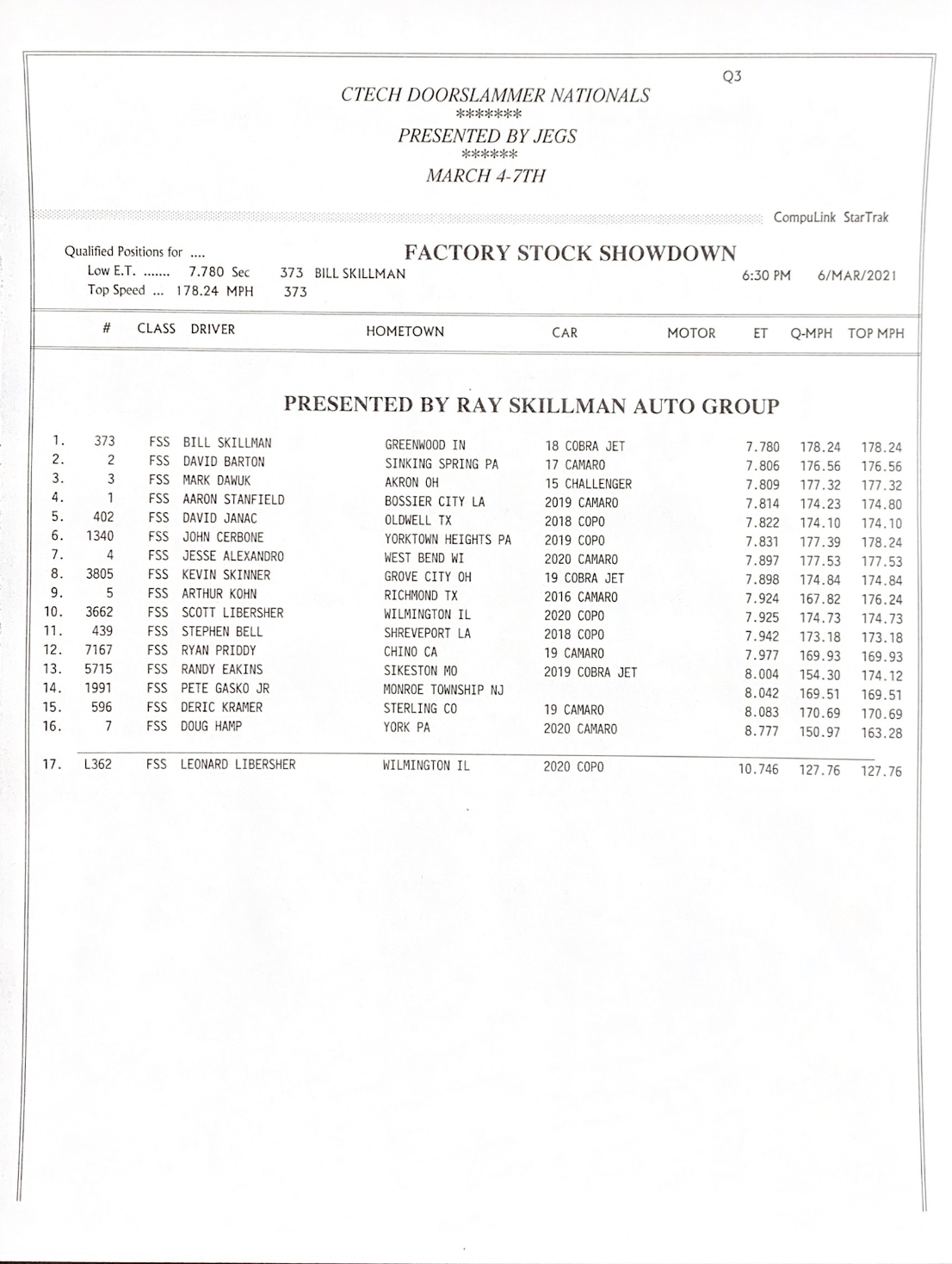 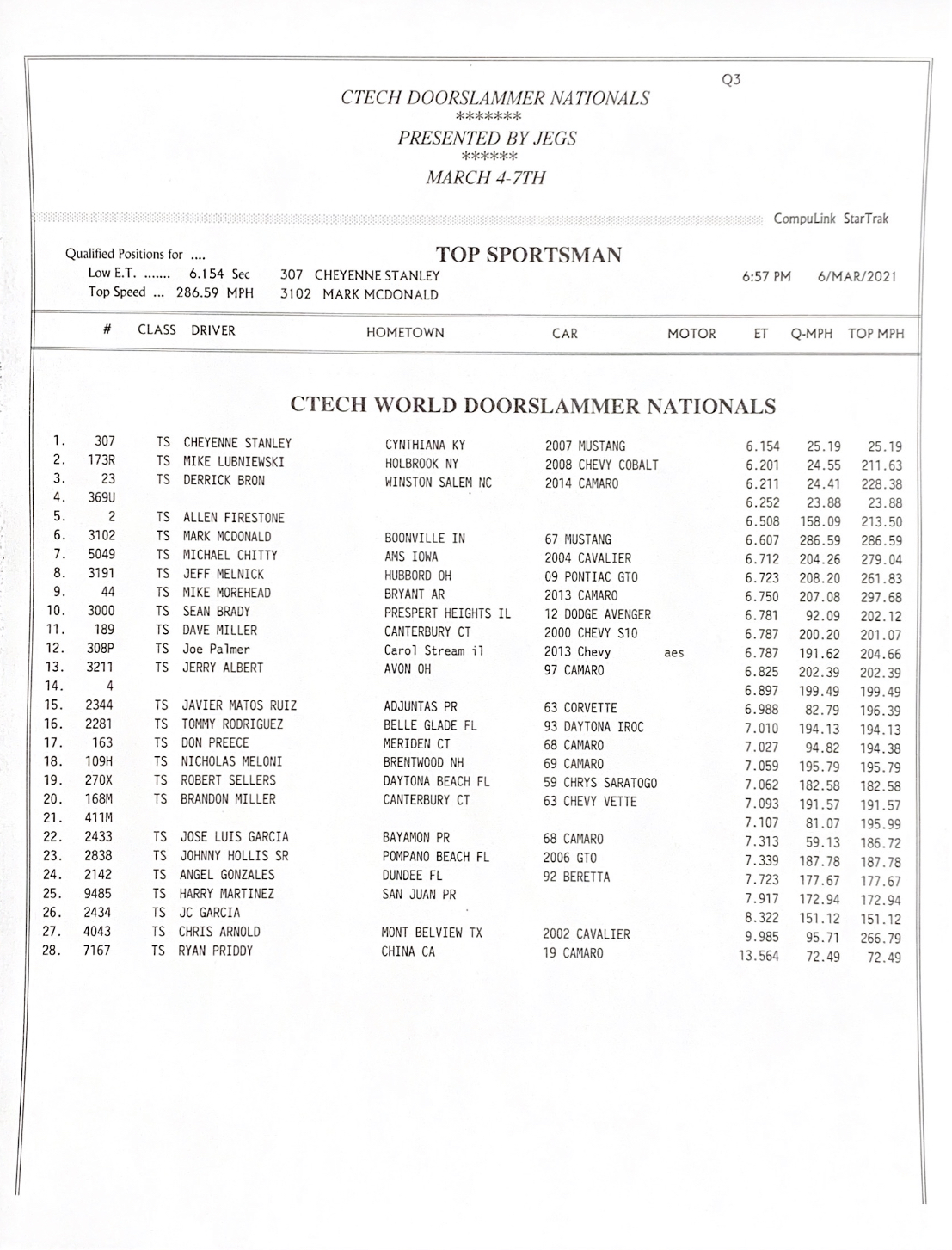 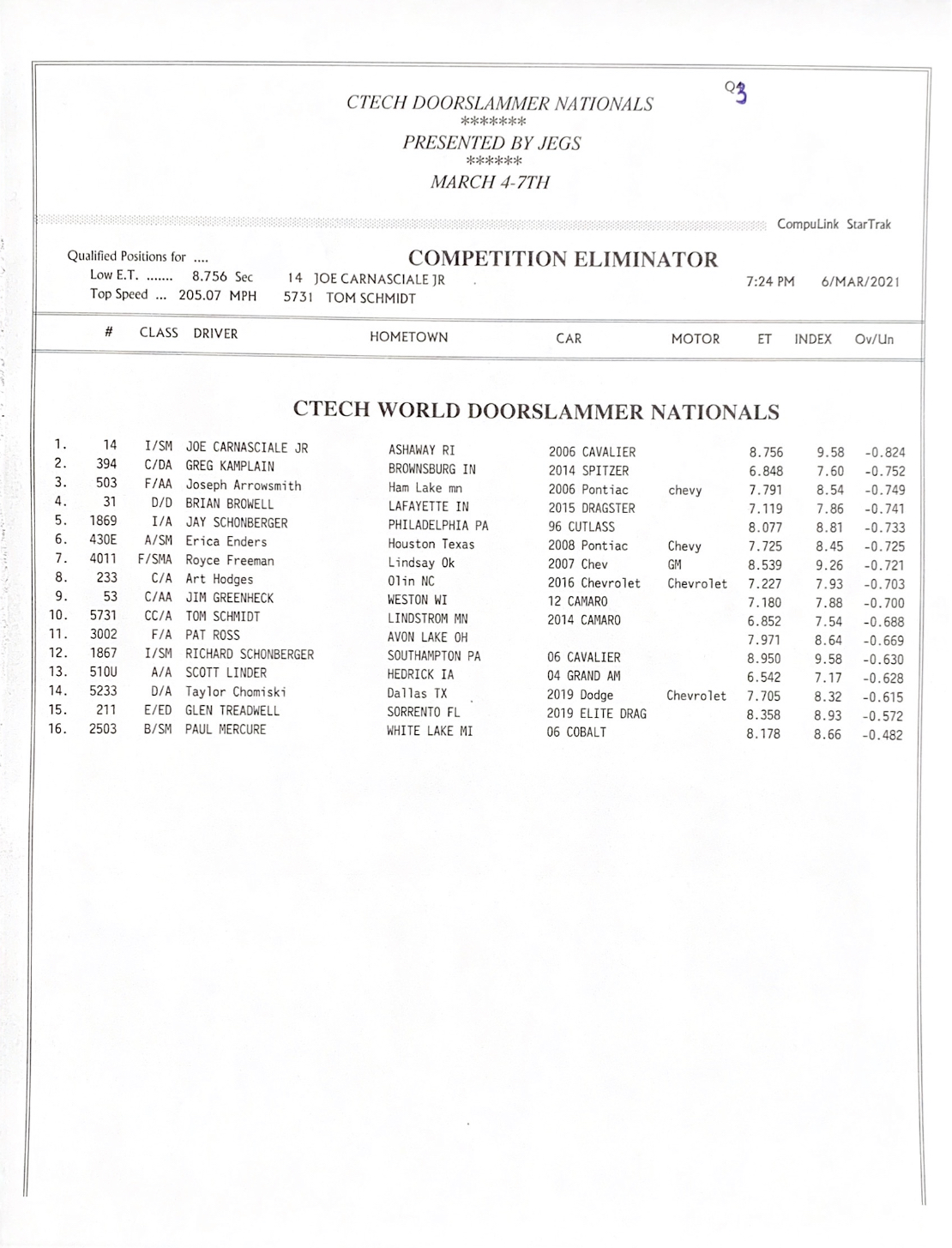 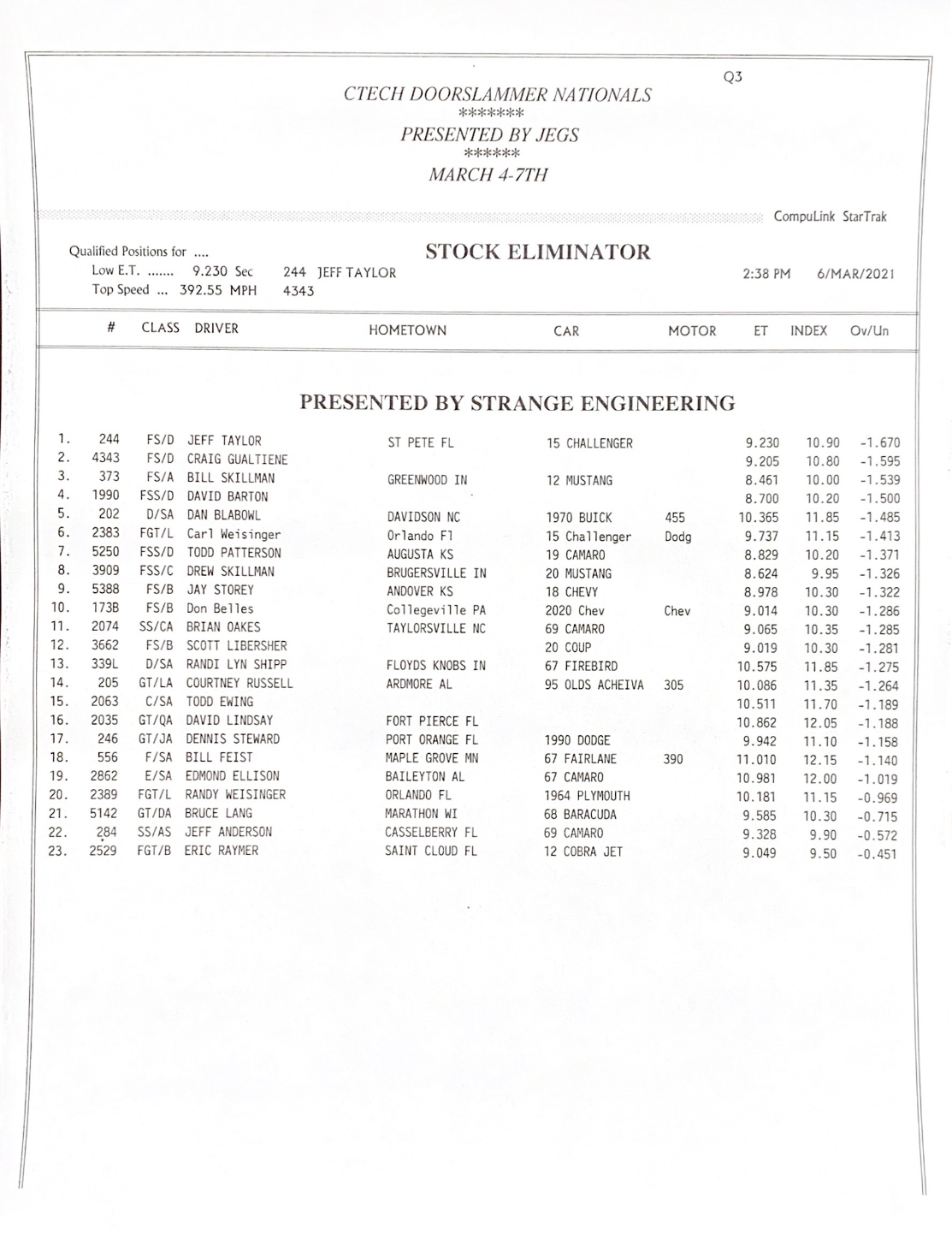