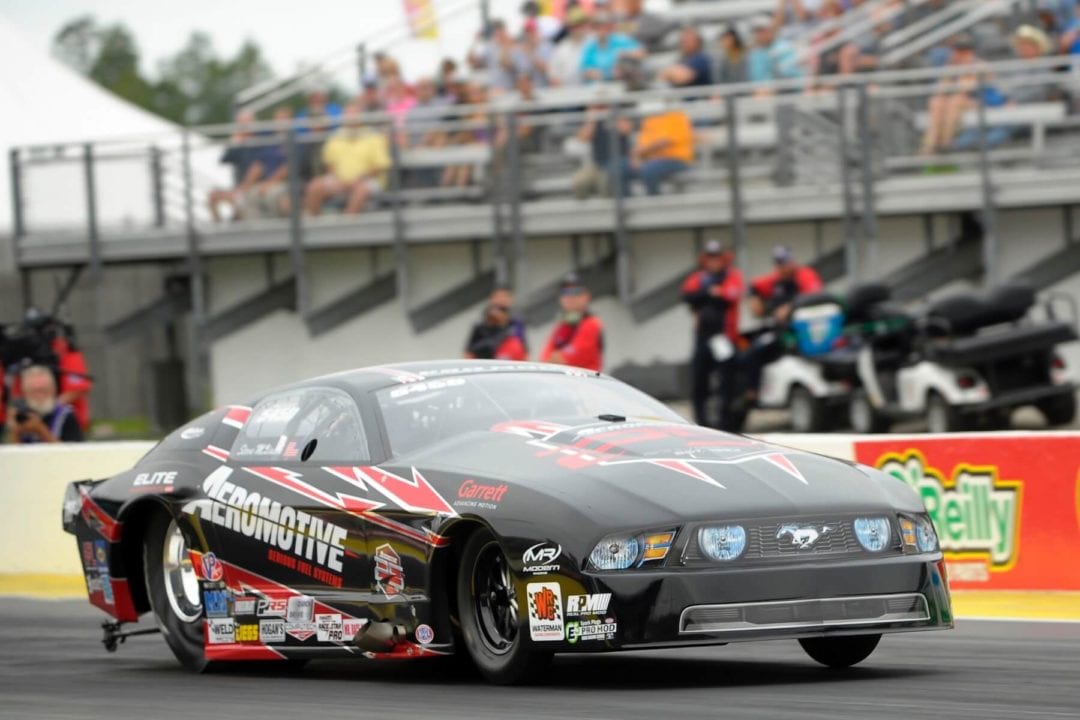 Steve Matusek might have just missed out on qualifying for the NHRA Pro Mod season-opener at the 50th annual NHRA Gatornationals. But considering the massive undertaking that transpired over the winter, Matusek came away from Gainesville even more excited about the possibilities for his team in 2019.

It’s been a whirlwind few months for the Aeromotive Inc. president after joining forces with Elite Motorsports. He added partners like Garrett Advancing Motion and Turbosmart to the mix, teamed up with tuner Shane Tecklenburg, and Justin Elkes and Modern Racing as part of Elite, and debuted a new turbocharged Mustang that took Matusek back to his roots.

It was a massive shift and a multitude of changes in a short time, but the team found its way to Gainesville and Matusek improved as the weekend progressed, finishing in the No. 17 spot with a run of 5.761 at 258.81 mph in his Aeromotive 25th anniversary Mustang. He just missed qualifying in the quickest field in NHRA Pro Mod history, but there was plenty to be gained at the first of 12 races in the 2019 season.

“It felt like victory just making it to Gainesville,” Matusek said. “This project went from 0-260 mph in three months. Justin [Elkes] and the team at Modern Racing completely rewired the car, installed the drivetrain and turbo system and we designed and installed a wrap on the car. To have been able to go test and make it to the Gatornationals with everyone still smiling and enthusiastic really says a lot about this group of people.

“Of course, we’d have loved to qualify No. 1 and win the whole deal, which we actually did feel was a possibility, we’re all excited about the progress we’ve made in a short amount of time and where we’re headed.”

Much of Matusek’s optimism stems from a few well-spent days testing at South Georgia Motorsports Park the week leading up to the NHRA’s famed East coast opener in Gainesville. The twin Garrett turbocharger-equipped Mustang improved on every test lap, and amongst a slew of small victories for the group, carrying that trend into qualifying for the Gatornationals was at the top of the list. Matusek’s final qualifying attempt on Saturday night produced a 5.761-second, then track record-setting 258.81mph effort that temporarily got him into the field. Though they were eventually bumped out, it wasn’t for not as the team gained valuable data heading into the second NHRA Pro Mod race of the season, which takes place in three weeks in Houston.

Matusek ticked off a lot of boxes along the way in Gainesville, too, also noticing plenty of special characteristics from an Elite Motorsports team that brought on Elkes and Tecklenburg in the off-season.

“There’s ‘buy-in’ here from all directions that I believe is significant in our sport, and is really unique for a group of people that are so early in the process,” Matusek continued. “There’s something special happening here, and I don’t think there’s anyone involved who would say otherwise. Richard Freeman at Elite Motorsports started putting all this together late last year, started identifying the people necessary to build a front-running, championship-contending NHRA Pro Mod team together and I think it’s safe to say we’re making progress toward that goal. To have companies like Garrett and Turbosmart show their belief in us as well, it’s a big deal. It sounds simple, but in life, business and racing – you want to see forward progress and that’s what we have here – that and a full head of steam headed into Houston, Texas.

“As excited as I am, and I think all of us are, I’m also appreciative,” continued Matusek. “For Tim Coltey and the team at Garrett Advancing Motion to take a chance on a newly formed team to fly their colors really says a lot, and we won’t rest till we provide a significant return on investment for the people that believed and supported us in the beginning of what I believe will be a magical team.”

Merely scratching the surface of the team’s potential in Florida, Matusek believes the team’s immediate cohesion and outside the box thinking will bring them right into the thick of things starting at the NHRA Spring Nationals amongst what is inarguably the most competitive field of doorslammers ever assembled. With that, though, Matusek is having an absolute blast, and that’s been critical to surviving and thriving in the stress and workload of a new direction for he and Aermotive’s on-track efforts in 2019.

“Above all else, I’m thrilled to be involved with a forward-thinking, innovation-driven program,” concluded Matusek. “Not to mention, I’m having a lot of fun. It was a bit nostalgic to jump behind the wheel of the motor home and roll down to Gainesville, and it was great to spend the weekend hanging out at the race track with my wife, my daughter Kristen, her husband Johnson and the whole team. We’ve barely scratched the surface of what this group of people can accomplish, and it’s going to be a lot of fun to see what happens next.”