The 2018 NHRA Mello Yello Drag Racing Series season was not one Antron Brown has been accustomed to during his standout career, and the Top Fuel driver has made all the necessary steps to ensure the 2019 season is decidedly different. The three-time world champ is in better shape after a workout-filled offseason, his mind is right, a strong team is in place and Brown believes the upcoming season has all the makings off a great one.

The talented star won just one race in 2018 in his 10,000-horsepower Matco Tools dragster, but Brown has put those struggles behind him and is now only focused on starting 2019 strong at the NHRA’s annual iconic opener, the tradition-rich 59th annual Lucas Oil NHRA Winternationals presented by ProtectTheHarvest.com, Feb. 7-10 at Auto Club Raceway at Pomona.

“Last year we went through our bumps and bruises, but we grew as a team from it,” said Brown, who finished sixth in Top Fuel points in 2018. “We changed a lot, learned and grew, and now we’re a lot more seasoned in our spots. We’re coming in ready to go and we’re motivated. Whenever I go to race I’m coming to win, and I’m coming into the season in the best shape I’ve been in a while. I’m ready for battle and my full focus is only on racing and that’s it. I’m excited.”

Doug Kalitta (Top Fuel), Matt Hagan (Funny Car) and Bo Butner (Pro Stock) were last year’s winners of a race that will be televised on Fox Sports 1 (FS1), including finals coverage beginning at 5 p.m. on Sunday, Feb. 10. It is the first of 24 events during the 2019 NHRA season and an ideal start would mean Brown’s first career victory at the Winternationals. 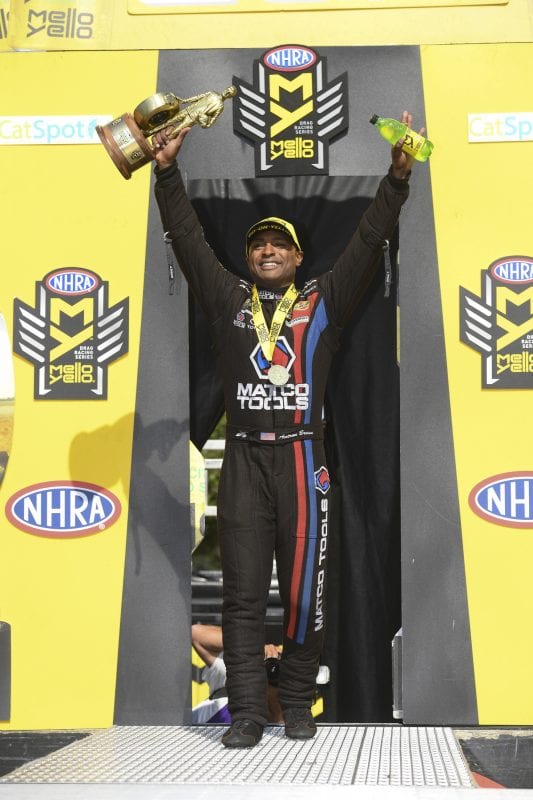 That would immediately put the team on the right path and match the win total from the entire 2018 season. Last season’s victory was a big one, as Brown became just the fourth driver in NHRA history to reach 50 Top Fuel wins, but for a guy who averaged nearly six wins each of the previous seven years, one win wasn’t enough. It motivated Brown, who has 66 career wins, and his team to put in ample work over the winter and he plans to put it to good use in Pomona.

“We’ve all been putting in the work and we’re ready for Pomona,” Brown said. “We want to start strong because we know that builds confidence. When you establish confidence in the team early in the season, you’re able to get through the rough stuff when it comes along. Getting off to a good start gives you the lead on everybody and we’re going to come out aggressive every race. That’s our mindset and we’re going to get back in that groove of what we do.”

An aggressive Brown could put him back in prime contention for a fourth world championship, but his sole focus in Pomona is picking up his first Winternationals victory. To do so, he will have to get past close friend Steve Torrence, the defending world champion who won all six playoff races a year ago, as well as class standouts Brittany Force, Clay Millican, Doug Kalitta and Terry McMillen, and Don Schumacher Racing teammates Leah Pritchett and Tony Schumacher.

“This year, we’re going to make it tough on everybody,” Brown said. “That’s our plan. Pomona is always a really good track and it’s a place where you can set records. You have to bring it and that’s why I like starting the year there. What makes it so special is it’s the track that starts the year and ends the year. It’s a place to make history. Championships are started and finished there.”

Bo Butner is after a repeat Winternationals win, but it won’t be easy for the 2017 world champion. He’ll face off with the likes of Jeg Coughlin Jr., who finished second in points last year, Jason Line, who has five event wins, Greg Anderson and Erica Enders.