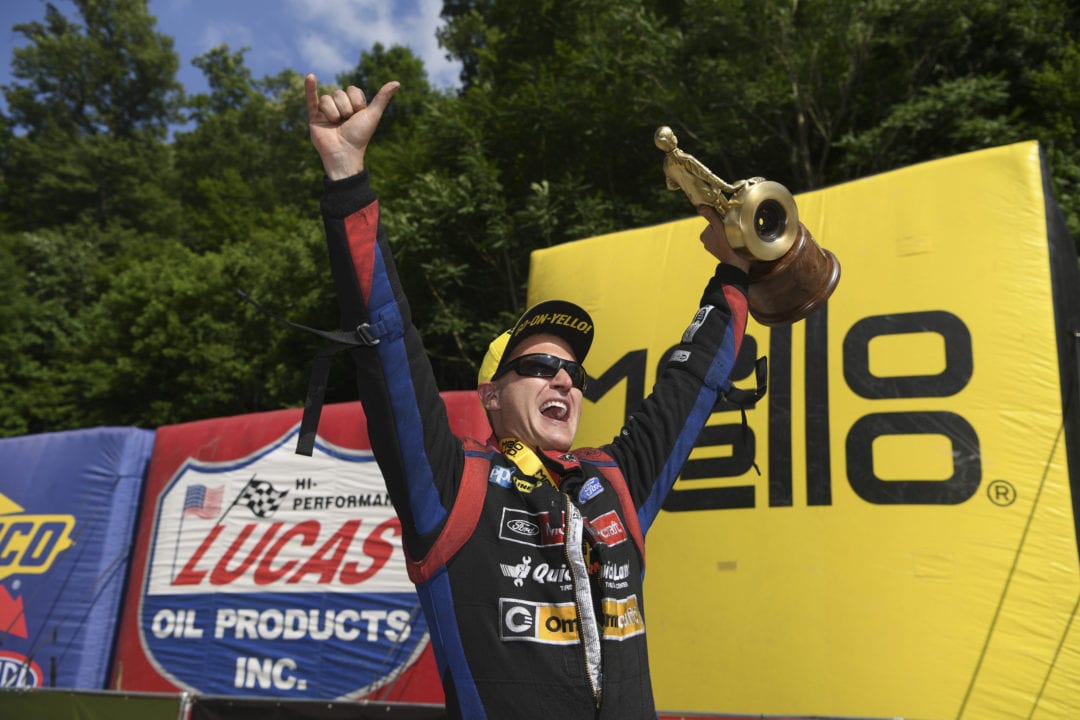 Things couldn’t be any better for Bob Tasca III heading to his home track, New England Dragway, for the upcoming seventh annual NHRA New England Nationals, July 5-7. The Hope, R.I. native has won back-to-back races for the first time in his Funny Car career, which means the only thing left to do right now is to pick up his first career Funny Car win in Epping.

It hasn’t gone down during the first six years, but Tasca is proud how area fans continue to pack the facility. That will certainly be the case when the NHRA Mello Yello Drag Racing Series returns during Fourth of July weekend, and Tasca is ready for his 11,000-horsepower Motorcraft/Tasca Auto Parts Ford Shelby Mustang to provide the fireworks. As for the celebration, Tasca hopes it’s in the winner’s circle after commemorating his third consecutive win in 2019.

“I’m looking forward to Epping and it’s my home track,” said Tasca, who is seventh in Funny Car points. “It’s been home to some great memories for me. I’ve won in everything but my Funny Car there, but this is the best car I’ve had going there. It would be great to go up there and do well. New England is a great place this time of year and Fourth of July weekend, it’s going to be a fun time.”

Steve Torrence (Top Fuel) and Matt Hagan (Funny Car) were last year’s winners of the event that will be televised on FOX Sports 1, including live finals coverage starting at 1:00 p.m. (ET) on Sunday, July 7. It is the 13th of 24 races during the 2019 NHRA season, and Tasca will look to start the second half the season the same way he ended the first – with a win.

After making wholesale changes and adding the likes of Jon Schaffer and Mike Neff on the tuning side, Tasca has looked incredible over the past two races. He waited almost seven years to return to the winner’s circle thanks to his win earlier this month in Bristol, but Tasca waited only a week to return thanks to another impressive effort in Norwalk. Tasca hoped the changes would pay off down the road, but they’ve had an immediate impact in the loaded Funny Car ranks.

“It’s obviously paid off for us and I have all the faith in the world in the group of the guys, that not only will we be ready for Indy, but we’re going to be a contender for the championship this year,” said Tasca, who has six career Funny Car wins. “This is the best car I’ve ever sat in. It’s the most consistent car I’ve ever been in, it’s as quick as anything I’ve ever driven, but what gives me is the car. When you have a car that goes down the racetrack, it will get quicker because you have the data to look at.”

The data currently shows Tasca running as well as anyone in the class. For that to continue at his home track in Epping, Tasca will have to get past the likes of points leader Robert Hight, 16-time world champ John Force, who continues his search for his 150th career victory, defending champ J.R. Todd, Norwalk finalist Jack Beckman, Tommy Johnson Jr., Matt Hagan, Ron Capps, Shawn Langdon and Tim Wilkerson. But Tasca has raised the bar in his program and the goal is to keep pushing forward as the Mello Yello Countdown to the Championship looms.

“It’s very satisfying but it comes with a very high expectation,” Tasca said. “We hold ourselves to a very high standard. The only thing this has done is made us more confident, but by no means are we resting on our laurels. We’re a long way from where we want to be, but we’re on the path of what we want to achieve, and I can say that with confidence. We’ve got a lot of hard work ahead of us, but this team, we’re not afraid of hard work. We’re in the meat of the season and we want to continue to move up in the points. That’s the bottom line.”