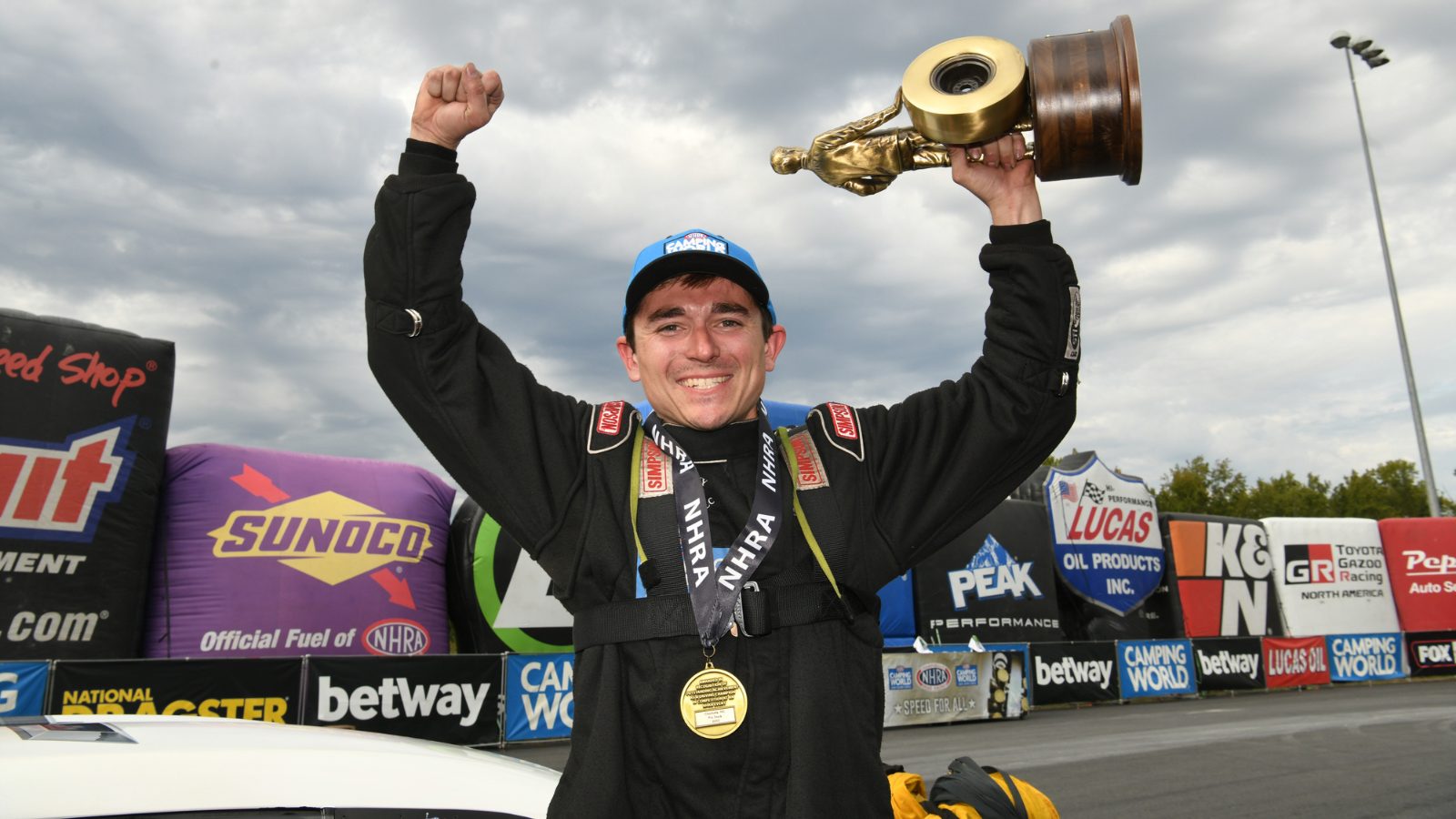 Pro Stock standout Aaron Stanfield emerged victorious for the third time this season today at the Betway NHRA Carolina Nationals. The Elite Motorsports team is not only leaving zMAX Dragway with yet another NHRA Camping World Drag Racing Series win, but also with the top three leaders in the Pro Stock Countdown to the Championship. Erica Enders continues to lead the points thanks in part to an exemplary qualifying performance in her Melling Performance/Elite Motorsports Camaro. Stanfield is second in the points standings, followed by Troy Coughlin Jr. in third.

Stanfield earned his seventh career Pro Stock win against Matt Hartford on a day full of intense racing action. This is the first time Stanfield has won a Pro Stock event with his wife, Joleigh, in attendance, making the win that much sweeter. 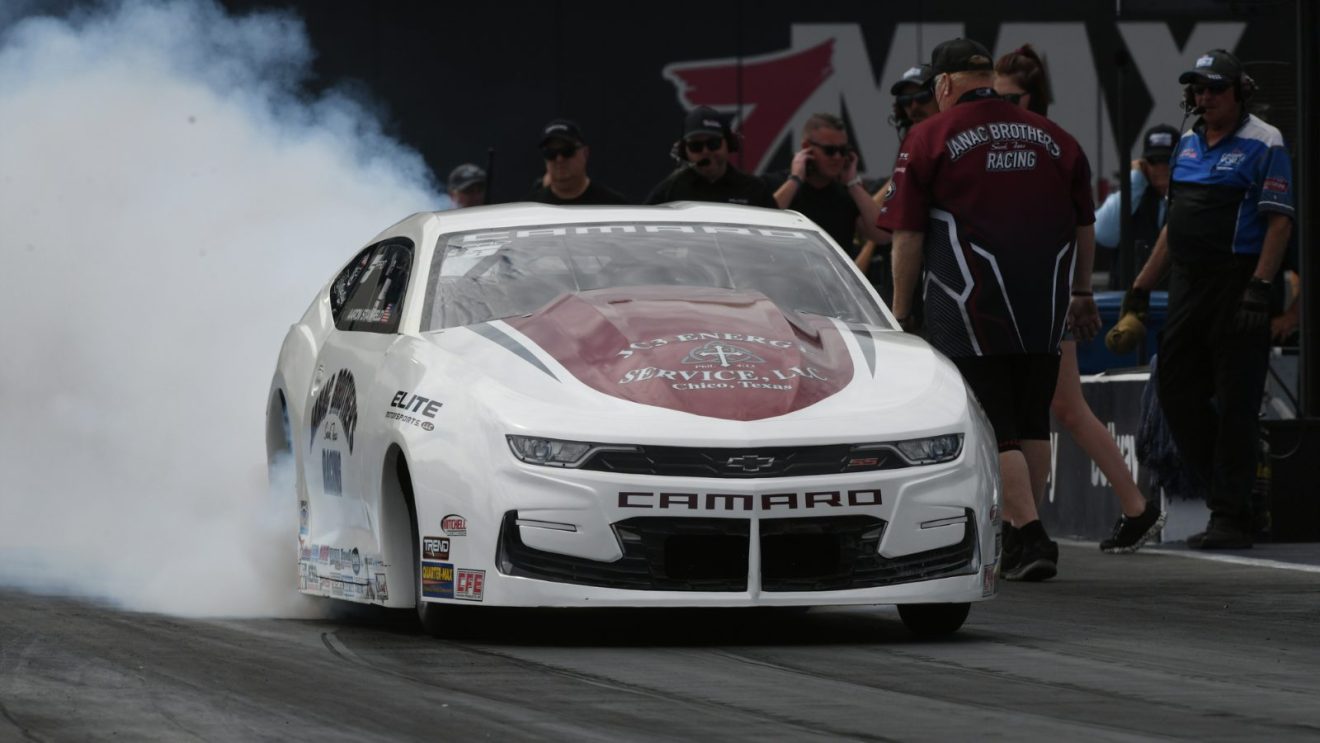 “I’m super pumped up,” said Stanfield just moments after accepting his Wally. “These Elite Motorsports guys, Janac Brothers, JC3 Energy – I couldn’t do it without them. Matt’s had my number the past few times we’ve raced. They’ve done a great job this weekend and hats off to them. Our team’s had a little adversity lately and we came through it right there. We’ve been working really hard and I’ve been struggling as a driver, but we pulled it together today. I just want to keep winning. I want to keep driving and I’m just thankful for this opportunity.”

Four-time Pro Stock world champion Enders dominated qualifying, not only nabbing the No. 1 position for the fourth time this season but also powering to the low E.T. of each qualifying session, garnering her valuable bonus points to extend her lead in the Countdown. Her pass of 6.510-seconds at 212.46 mph was more than one-hundredth of a second quicker than any other vehicle in the category.

Stanfield entered race day from the No. 6 qualifying spot and faced Deric Kramer in the first round of eliminations. Kramer had a slight starting line advantage but Stanfield’s finely-tuned Janac Brothers/JC3 Energy Camaro sped past him for the win.

In other first-round Pro Stock matchups, Elite Motorsports driver Cristian Cuadra defeated No. 9 qualifier Camrie Caruso. C. Cuadra’s brother, Fernando Cuadra Jr., did not fare quite so well and his race day came to an early end after being defeated by Dallas Glenn. In his gorgeous red Johnson’s Horsepowered Garage Camaro, Bo Butner faced Hartford in Round One of eliminations. Despite Butner’s superior reaction time, Hartford got to the finish line first.

Coughlin faced his teammate Fernando Cuadra Sr., whose sleek gray Corral Boots Camaro looked fantastic streaking toward the finish line. But it was Coughlin who took his starting line advantage down the track in his JEGS.com / Elite Motorsports Camaro to get the win. In the final first-round matchup, Enders turned on the win light against Pro Stock veteran Larry Morgan.

In the next round, Stanfield defeated the current Pro Stock world champion Greg Anderson, while Coughlin turned on the win light against Kyle Koretsky. Elite teammates Enders and C. Cuadra lined up against each other and despite C. Cuadra’s stellar reaction time of .007-seconds, Enders managed to outpace his Corral Boots Mustang for the quarterfinal win.

Three Elite Motorsports Pro Stock machines were still in contention coming into the semifinals at zMAX Dragway. Teammates Coughlin and Stanfield faced off first. These two drivers are fiercely competitive and have some of the most consistent and quick reaction times in the category. Stanfield got the starting line advantage and held on to it to advance to the final round. Enders faced No. 4 qualifier Matt Hartford who got the round win, moving on to face Stanfield in his Janac Brothers/JC3 Energy Camaro in the finals.

The Elite Motorsports Pro Stock team has won 12 of the 15 Pro Stock events contested this season. The next stop on the NHRA Camping World Drag Racing Series Tour will be the NHRA Midwest Nationals, September 30 – October 2 at World Wide Technology Raceway in St. Louis.