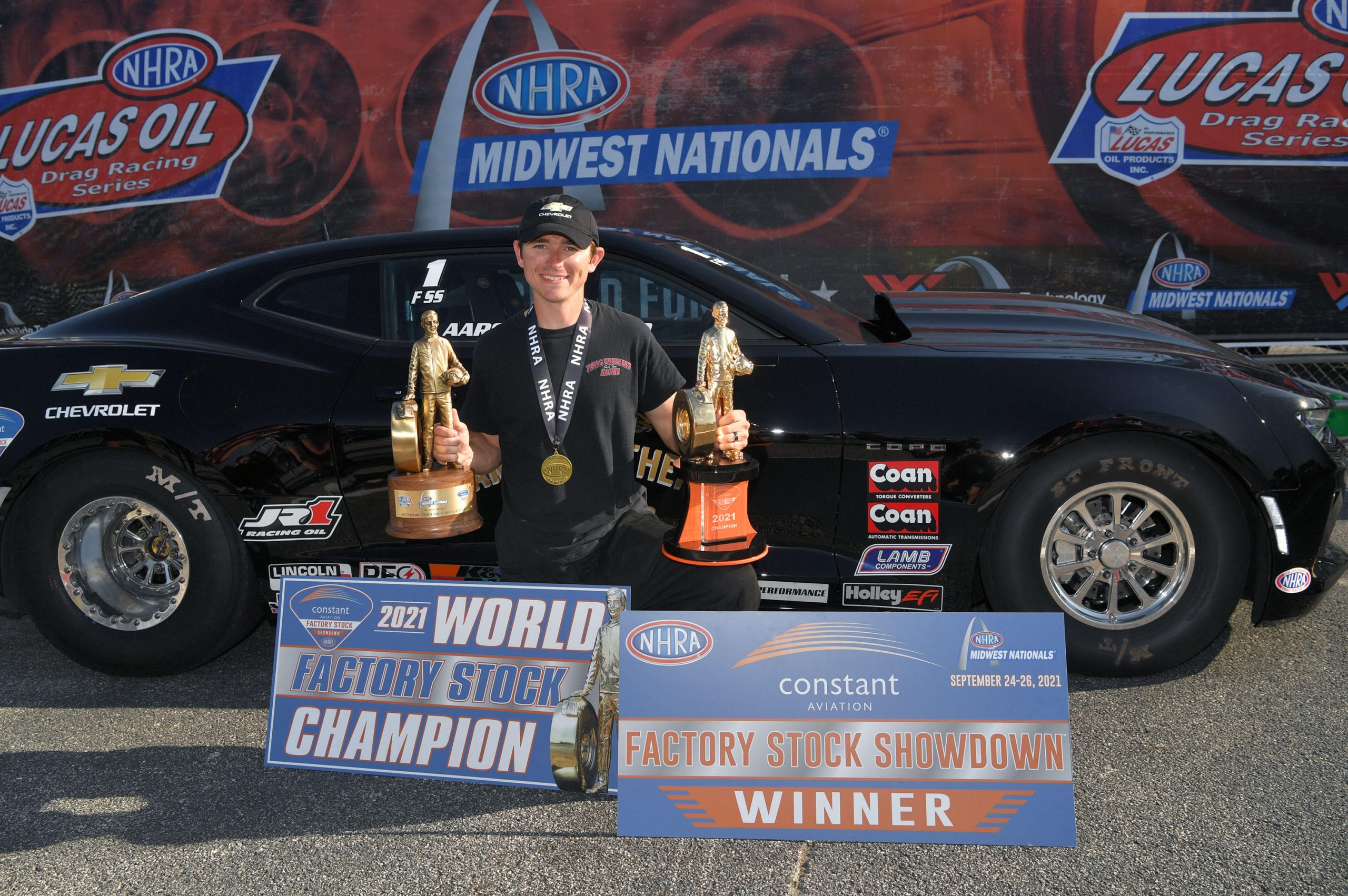 In a dominant performance at World Wide Technology Raceway 2020 Factory Stock Showdown world champion Aaron Stanfield made it two in a row clinching the 2021 Constant Aviation Factory Stock Showdown when his closest competitors, David Barton and Jesse Alexandra, lost in the first round today at the NHRA Midwest Nationals. Stanfield was the No. 1 qualifier and defeated Kim Shirley, David Janac, John Cerbone and Leonard Lottig on the way to his second victory of the season.

“I didn’t know too much about the championship scenarios, I just knew I needed to go some rounds to clinch it,” said Stanfield, who opened the season with a win at the historic Gatornationals. “We had a lot of confidence. We worked hard, and we found some power to get our race car working a little bit better. We made some nice laps this weekend.”

Stanfield has led the points throughout the season but coming into the NHRA Midwest Nationals he was confident in his team’s performance. Throughout the season his COPO Camaro has also posted a runner-up finish at the SpringNationals in Houston and the U.S. Nationals in Indianapolis. The second championship was more challenging to Stanfield who closed out the 2020 season with five consecutive wins.

“The first championship one was pretty awesome,” said Stanfield. “I wouldn’t say one was better than the other. They are both special and we have worked so hard to get this championship. This one is just as special as the first one. Short of getting a Pro Stock win this was a really good day. I wish I could have gone a little further in Pro Stock but congrats to Erica (Enders). I was happy to see her win.” 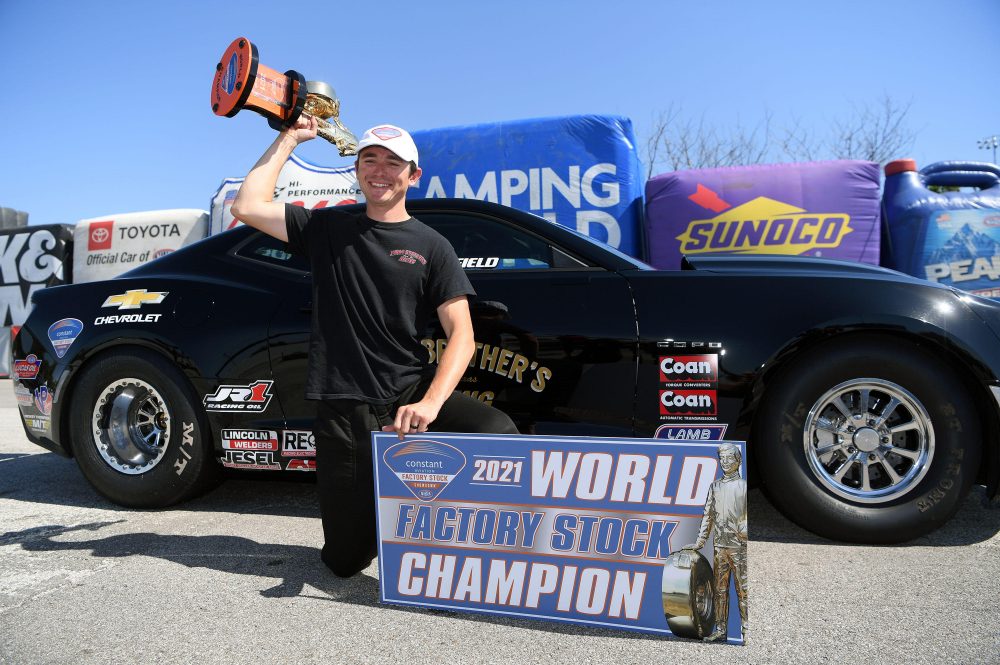 In the opening round Midwest Nationals runner-up Leonard Lottig took out U.S. National winner Jesse Alexandra to collect the $1,000 Constant Aviation Factory Stock Showdown Bounty. It was the sixth consecutive Factory Stock Showdown event with a bounty payout. Heading into the final race of the season Stanfield will carry the bounty.

The performance competition throughout the Factory Stock Showdown class was evident as Dodge Challenger Drag Pak driver Mark Pawuk posted a stout 182 mph run in the first round. The battle between the Chevrolet COPOs and the Dodge Drag Paks is something that draws attention to the factory stock class according to Stanfield.

“I try not to get out of the box when it comes to who we are racing,” said Stanfield. “You really need to mentally stay in your own lane and focus on what you can do. That is what we did this weekend. I think the Dodges are making some big strides. It is cool to see the ETs coming closer together. That equates to some really good drag racing like we have seen this weekend.” 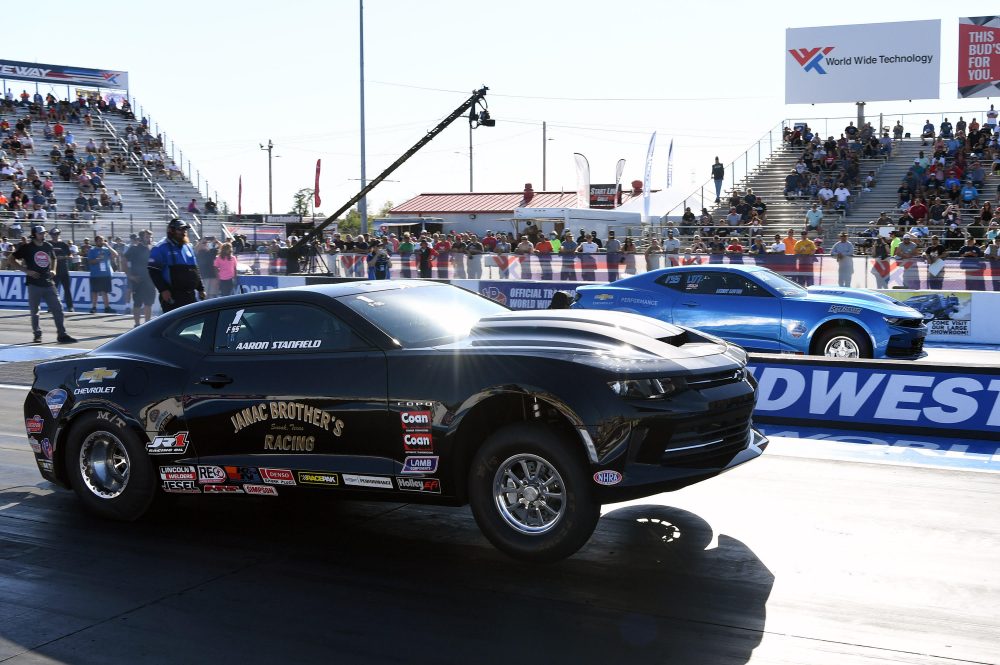