I found myself enthralled on a Wednesday evening — last night was Wednesday, right? — which is saying something these days.

Other than watching Michael Jordan eviscerate every human alive on the basketball court for the past five weeks on the extremely well-done “The Last Dance” documentary, watching Mission Impossible: Ghost Protocol for the 47th time has gotten a little old.

But last night, I watched some excellent racing and I’m probably the furthest thing from a NASCAR die-hard. Yet, in less than three hours I saw outstanding racing, great strategy and drama under the lights, the lure of mid-week entertainment in the form of motorsports, plus Chase Elliott flipping off Kyle Busch in front of a national television audience (and kudos to FS1 for keeping the camera on Elliott during the entire one-finger salute).

I mean, what’s not to love?

Of course, we need NHRA actually back racing — another topic, another day (sigh) — but the possibility of a pair of nitro Funny Cars pulling to the staging lanes under the lights at about 10 p.m. on a Wednesday evening on FS1 just sounds downright enthralling.

Listen, during these completely strange and unprecedented times we need to be exploring every avenue to bring in new fans to professional drag racing.

Before not actually releasing the schedule, the rumored starting day was supposed to be the first week in August, which is far too long in most everyone’s eyes. By then, every other form of professional racing in this country will be well into their improvised schedule.

There’s plenty of variables in play, sure, with television contracts being a major one, but hopefully the official revamped schedule will include racing at least in July, as the rumors suggest. 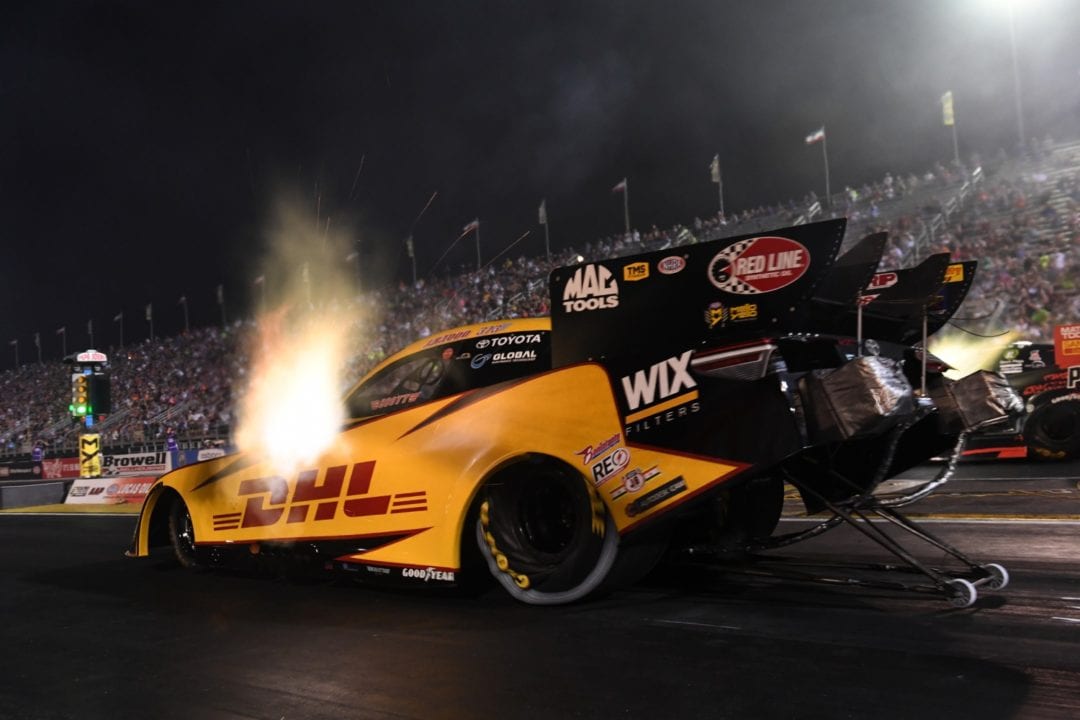 For now, though, let’s envision how enjoyable mid-week night NHRA would be. One of the biggest things working against all motorsports is how the conversation is lost during the week. Everything ramps up by the weekend, but keeping that conversation alive during the week is often a difficult thing, at least among casual fans or, say, a television audience.

Throwing out a Wednesday night race could be an enticing way to spice things up. Making it happen this year is likely too soon — though NASCAR moved fast and got it built into its schedule extremely quick — but right now may also be the perfect time.

Only a handful of sports are actually in session right now and putting together a summer night race on a random Wednesday would certainly have many chomping at the bit.

I know I can’t be alone.

I saw this tweet from standout National Dragster journalist Kevin McKenna, and I’m sure there were plenty of others who pondered the same thing while watching Darlington Dragway garner a lot of eyes the past several days.

Just thinking out loud here but wondering how a midweek nightime @nhra race might go over? Dare suggest a no practice/no qualifying format? #nhra #speedforall

Talk to any racer and they’ll likely fondly recall a mid-week race or a mid-week match race, harkening back to a time when there was a whiff of a rebel atmosphere in the night air.

When I talked to Greg Anderson earlier this year — which seems like 10 years ago — in preparation for the World Doorslammer Nationals, he mentioned how much fun he had at the one-off type race, noting the mid-week race at a small track between the Sonoma and Seattle stops on the Western Swing.

I’ve heard Clay Millican wax poetic about mid-week match races at Englishtown, and there are plenty, plenty of others who could do the same.

Of course, you wouldn’t want to do it every week, and you’d have to be creative about what classes are invited, if there’s little or no qualifying (I like the no qualifying aspect that McKenna suggested), and how many cars. But an 8 or 16-car nitro, or Pro Mod, or Pro Stock shootout would be incredible, a little outlaw and a heck of a lot of fun for everyone — drivers and teams included.

It’s the perfect time to think differently and throw out something new and exciting. If there’s anything these times have given us, it’s the chance to go way, way outside-the-box and try new things. If it doesn’t stick, so be it — at least you tried. If it turns into one massive annual mid-week night race a year, then game on. And if it happens a few times a year, then maybe, just maybe we’ve found a way to make NHRA racing a little more distinct, a little more appealing and the average sports fan a little more apt to keep it on FS1 during a random weekday.

But let’s veer outside the norm every once in a while. It’s a great time to spur new growth and new interest.

I found myself dialed into NASCAR on a Wednesday. Maybe someone else would do the same with NHRA.