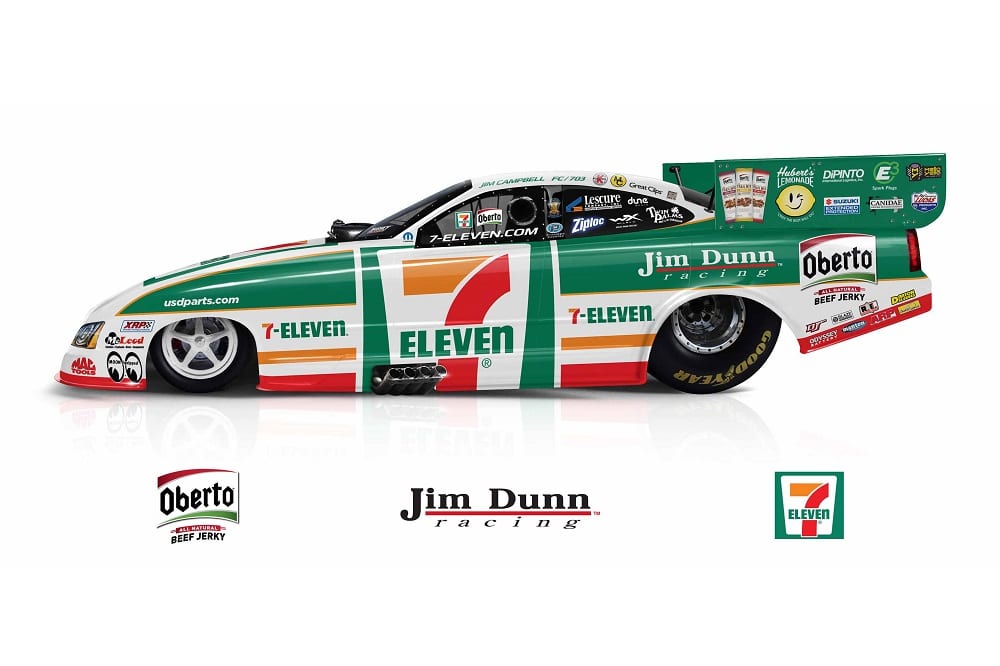 The world’s largest convenience store chain is gearing up for a high speed promotion in 2017. 7-Eleven will partner with Jim Dunn Racing and associate sponsor Oberto Beef Jerky for the 2017 National Hot Rod Association (NHRA) Championship Drag Racing Season. The primary colors of 7-Eleven green and orange will be showcased at more than half of the 24 NHRA national events. Featured races will be in markets where 7-Eleven stores are accessible to race fans on their way to and from the race track each day.

Jim Dunn Racing has been a leader in the sport of NHRA drag racing for more than 50 years and has represented top North American and global brand leaders like 7-Eleven and its 60,000 stores operated by the company, its franchisees and licensees around the world. In 2016, Jim Dunn’s 1972 Barracuda was voted #11 all-time most popular NHRA Funny Car by racing fans. The accomplishment is another added to the Hall of Fame team owner, crew chief, and former driver’s long list of accomplishments in the sport.

7-Eleven is no stranger to motorsports having sponsored IndyCar, NASCAR, and NHRA teams dating back to the 1980s. Throughout the promotion, associate sponsor Oberto Beef Jerky will be featuring its new Trail Mix and Original Beef Jerky in 7-Eleven stores in the U.S. Team Manager for Jim Dunn Racing, Jon Dunn, welcomes the new sponsors with enthusiasm for the coming season. “Our team has worked with a lot of great partners throughout the years and are glad to bring a top global brand to NHRA drag racing. Our sport has seen tremendous growth this past season with expanded television coverage on Fox Sports broadcasts as well as increased attendance at events.”