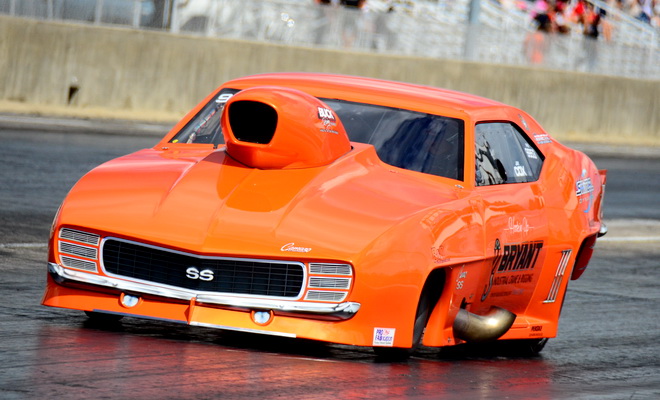 “I want to give five thousand dollars away. I can’t wait to hand the cash to a PDRA driver.”

So says Pro Nitrous team owner Bryant Marriner as the PDRA prepares for its sophomore season of eighth-mile competition. In an effort to see history made in the Pro Nitrous class, Marriner is prepared to hand over five thousand dollars in cash to the racer who breaks into the 3.60s in 2015.

Marriner, owner of Morrisville, North Carolina-based Bryant Industrial Crane & Rigging, wants to see the barrier broken, and he’s ready to get behind the effort by offering a major incentive in the form of cold, hard cash.

“I’m putting up a five thousand dollar cash bonus to the first driver in Pro Nitrous that gets into the 3.60s during qualifying sessions or elimination rounds this season,” said Marriner. “Test or practice runs don’t count, just qualifying and eliminations. The first driver to run a 3.699 or better gets the cash.” 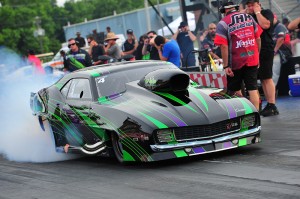 Presently the PDRA Pro Nitrous elapsed time record is in the possession of Tommy Franklin, who set the mark last October at Virginia Motorsports Park when he recorded a pass of 3.737 seconds. With the constant improvement in equipment and track preparation, Marriner knows the historic performance is just on the horizon, and he intends to help push things along.

“The way things are going, this season somebody is going to turn a 3.69 or better,” he said. “You really got to get after the motor and the car has got to be happy to do it. I figured I’d like to make it worth the while for somebody to get after it that hard. It could cost the person that’s going to try it some serious money to get their car right and ready to take what it’s going to take. I’ll have five thousand dollars in cash ready to hand over to the first driver to do it.”

Marriner, 65, is the owner of Bryant Industrial Crane & Rigging, a large, diversified operation based in Morrisville, North Carolina, that has been in business since 1983.

Although he was on the sidelines for over four decades, Marriner does have a racing background.

“I started racing when I was 17 years old, and I raced locally for a couple of years until I got drafted into the army. When I was in Viet Nam I made up my mind that I was never going to spend another dime on a race car. And I think I did a pretty good job of sticking to that promise for 43 years.”

But like so many others, the siren call of the track, the competition and the camaraderie was just too great, and last year he took a giant leap back into the deep end. 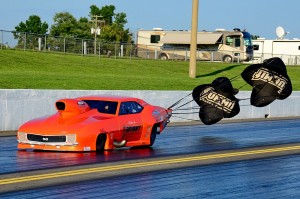 “Once racing gets in your blood you can never, never, ever get it out,” Marriner said. “From before I graduated from high school in 1967 I was going to every race I could, whether it was NASCAR, IHRA or NHRA. And every time they fired the engines up I got chills from my toes to the top of my head. And I still get ‘em today. The thrill, the drive, the excitement is still there, just like it was when I was a teenager.

“I finally decided that I had to get involved again, so this past year I bought Pat Stoken’s ’69 Camaro and went racing, this time with Jay Cox driving,” said Marriner. “We ran the car the second half of the season last year and finished tenth in the Pro Nitrous points. We did okay but didn’t quite have enough for the top dogs. At the end of the season we sold the used motor that we had been running with and had Charlie Buck get to work building us a big new motor, one that will be over 900 cubic inches. Now we’ll be able to run with the big boys!”

Like so many others, Marriner finds the PDRA experience exactly what he was looking for.

“I think the PDRA is great, it’s as simple as that. It’s not going to be like other organizations that fell by the wayside. They’ve got their ducks in a row and their heads screwed on tight. The reason it’s this way is because racers own it, back it and know what it takes to make it worthwhile for the racers that want to come out there and run.

“It’s not a corporate type of a deal where somebody is in it just to make some money,” Marriner added. “These boys are doing it because they want to do it and that makes all the difference. Of course there were a few bumps in the road the first season, but you have to expect that no matter what you do. There’s always a learning curve. But they had enough experience and expertise to make good, logical decisions. It’s really going to grow, and that’s all you can say. It’s going to grow, grow, grow.”

PDRA Race Director Bob Harris is very pleased to have the backing and support of racers and team owners such as Marriner.

“This is an unbelievable deal for the PDRA and the Pro Nitrous racers,” Harris said. “It’s going to take some serious preparation, perfect track conditions and a little bit of luck to break into the 3.60s, and Bryant’s big bonus is going to motivate a lot of people. We can’t thank him enough.”