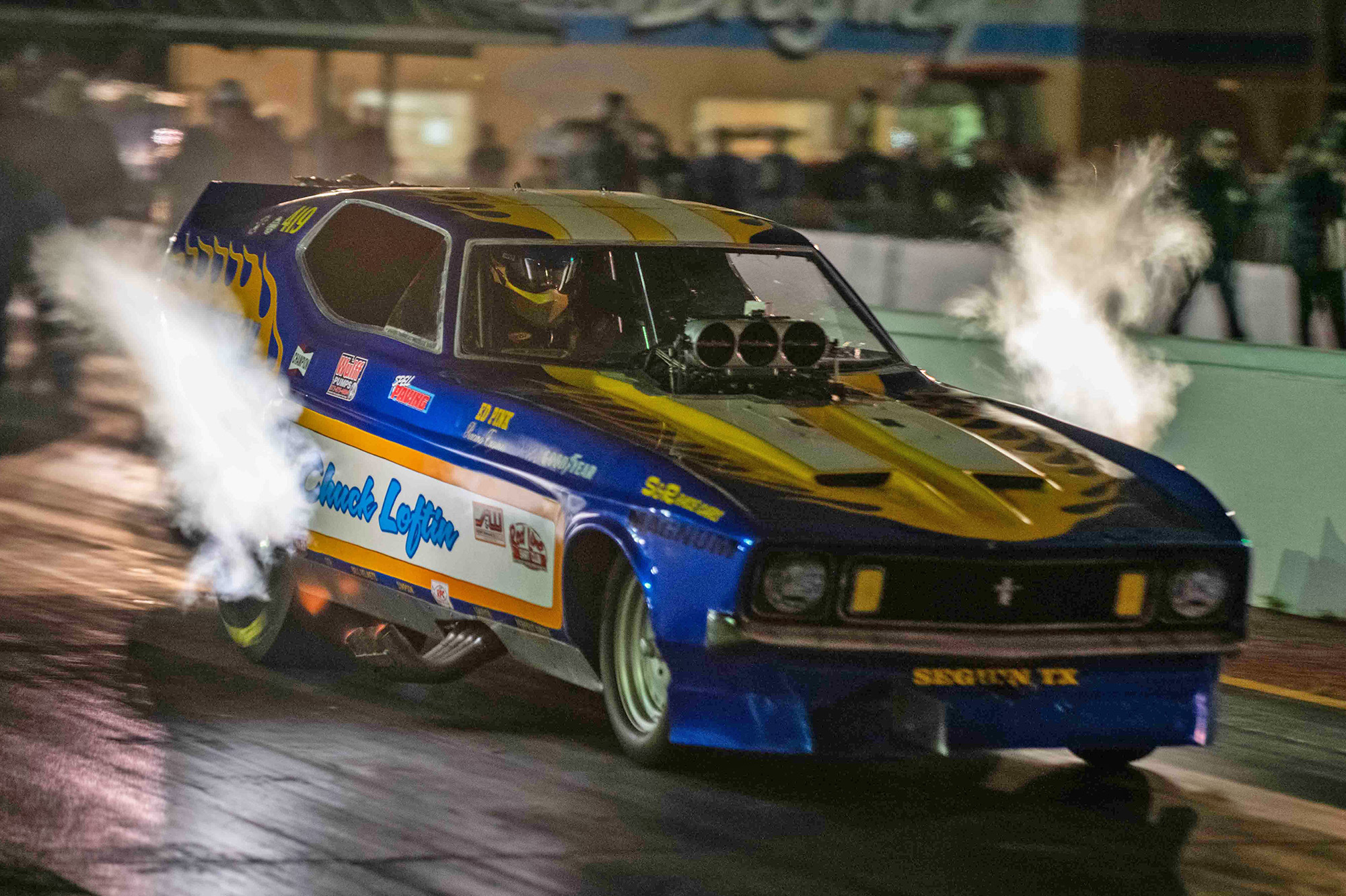 The Funny Car Chaos Championship series presented by Spell Paving Services and Wulff Pumps is ready to rumble into another season of heads up, run whatcha’ brung Funny Car drag racing in 2023. The excitement shared by racers and fans of the now seven year old Funny Car Chaos concept has evolved into an all out barnstorming tour of funny cars spanning the Southwest and Midwest regions from Louisiana to Illinois. Over 90 funny car teams participated in Chaos events in 2022 and although most would have never guessed it possible, series founder Chris Graves fully expects to welcome over 100 teams in the 2023 campaign with buzz of new teams coming to play and the addition of two new host facilities to the geographical footprint.

With no rules limiting engine combination or body style, the Funny Car Chaos series prioritizes the entertainment value of funny cars for the fans while leaves the door of creativity wide open for the racers who participate. Thus, you see a wide array of flip top floppers in the pits varying from nostalgia nitro and alcohol burners to modern bodied ‘big show’ style entries and even nitrous and twin turbo assisted combinations. Racers build their cars to their liking, not how a rule book tells them to, and fans reap the benefit. If you dig funny cars, Funny Car Chaos is your jam.

“What was intended to be a one race deal in the fall of 2017 has blossomed into a nation wide funny car movement and it’s hard to find words to describe how cool that is. The support we have had in building this program from the racers, fans and marketing partners of Funny Car Chaos are what has made this all become a reality for all of us. What an exciting journey this has been so far with so many new friends being made and so many funny cars getting back on the drag strip and laying down those long smoky burnouts. This series is all about having fun, headlining these grassroots racers and bringing two days of action packed funny car entertainment to our host facilities,” says Graves.

All the cars have names. All the drivers have autograph cards. Every ticket is a pit pass. Back up girls, dry hops, long smokey burnouts, all for a ticket price that costs less than $1 per Funny Car on the property. It’s as close to the good ol’ days as you can get, but with a modern twist. One thing is guaranteed, whatever flavor Funny Car you prefer, you will find it at Funny Car Chaos.

The 2022 season started off terribly for 3X defending Champion Ken Singleton who was involved in a horrific fire at the season opener, thankfully surviving but with severe burns ending his driving career. Singleton has made an incredible recovery and now serves as crew chief for Shayne Lawson’s “Man O’ War” team and captured their first win at the final race of 2022. Singleton had developed a friendly rivalry during the 2021 season with a fellow hard hitting alcohol burner in Iowa’s Kirk Williams. Williams and company put together an impressive campaign in 2022 and were crowned the new FCC Champions in October in Texas. Tom Furches, Jeff Cameron, Dustin Bradford and Chris Schneider all secured a final spot and their share of the $10,000 top five payouts for 2022.

The series will yet again kick off by hosting the largest funny car event in the world, the 3rd Annual Funny Car Chaos Classic at the historic Texas Motorplex in Ennis, Texas on March 16-18th where well over 50 funny cars are expected from coast to coast. Two new venues have been added to the 2023 season including Albuquerque Dragway where FCC will headline the track’s 60th Anniversary event July 28-29th. Additionally, it was recently announced that FCC has partnered long term with Maryland International Raceway to exclusively host an east coast non-points event, set for August 25-26th. The location and date of the final event of the 2023 season is to be announced.

See the complete schedule including additional dates in Texas, Missouri, Iowa and Nebraska, all of which can be live streamed on www.floracing.com. At each event the FCC series guarantees the payouts which paid out over $250,000 on the 2022 tour. Also be sure to check out the Chaos sister series Nitro Chaos which has new dates coming soon. Midwest racers and fans take note as for the first time in history, Funny Car Chaos and Nitro Chaos will be held in conjunction on the same weekend at Iowa’s Eddyville Raceway Park on May 26-28th in a mind-blowing double header event. Find out more at www.funnycarchaos.com and www.nitrochaos.com.