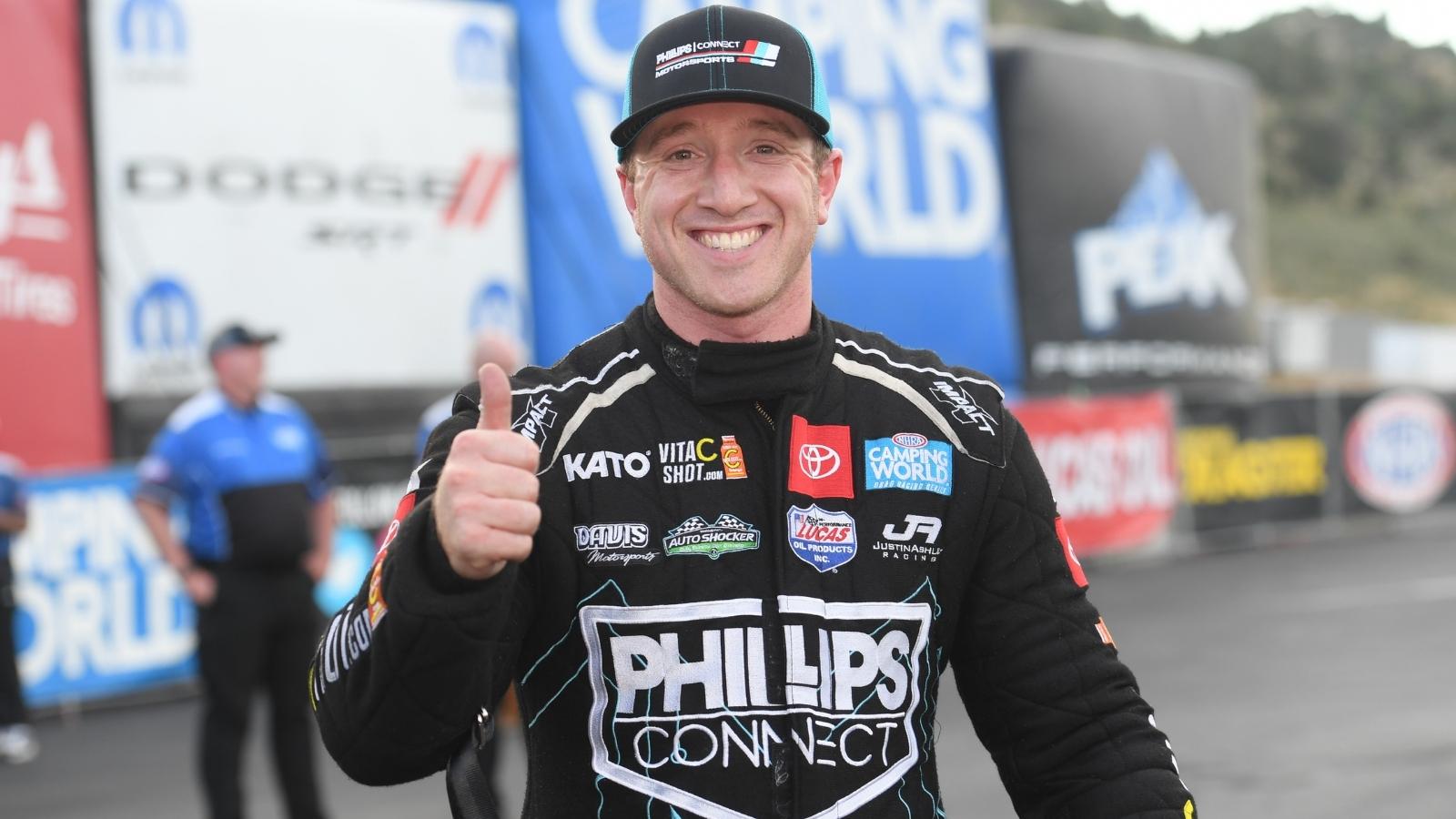 Last year Justin Ashley made his first runs at one of the quickest, fastest and historic tracks on the NHRA Camping World Drag Racing Series, Heartland Motorsports Park–Topeka racing to a quarterfinal finish. This year the third-year driver and team owner returns with a new sponsor Phillips Connect but also with a familiar name associated with his standout Top Fuel team. At the NHRA Winternationals Ashley and his Davis Motorsports team unveiled the Phillips Connect Toyota Top Fuel dragster powered by Vita C Energy and proceeded to win the season opening race celebrating with Phillips Connect executive “Mr. 300” Jim Epler. In 1993 Epler made the first 300 mph Funny Car pass, 300.4 mph, at Heartland Motorsports Park-Topeka collecting the Castrol 300 mph Club $25,000 for the effort.

“I am looking forward to joining Jim Epler and our Phillips Connect team in Topeka,” said Ashley, who also picked up a win at the NHRA Thunder Valley Nationals this season. “Jim has a lot of history at Topeka and this will be great opportunity to carry on that legacy. Our team always works hard to position ourselves for success and this race provides us with another opening to take advantage of that.”

On the heels of the Western Swing Ashley has maintained his spot as one of the Top Fuel points leaders heading into the Menards Nationals presented by Pet Armor sitting in third place, 88 points out of second. Over the three-race swing Ashley recorded two semifinal finishes and a quarterfinal finish.

“The Western Swing is challenging,” said Ashley. “It can be demanding on teams, but we found success over those three races. Now we have another three races remaining before the Countdown and we want to make the most of those opportunities starting this weekend in Topeka.”

Throughout this season and definitely since a runner-up finish at the New England Nationals Ashley and his Phillips Connect Vita C Energy Top Fuel team have been one of the toughest teams to beat in Top Fuel. Over the last six races Ashley has two final rounds including the Bristol win, two semifinals and a quarterfinal finish. The only blemish was a surprise upset loss in the first round at the Norwalk Nationals where Ashley was the No. 2 qualifier.

“I cannot stress enough how tough this Top Fuel category has been this season,” said Ashley. “We are successfully battling established teams, multiple car teams and multi-time world champions every round at every race. Mike Green, Tommy DeLago and this Davis Motorsports have proven we belong in that conversation. We are having a blast testing ourselves against this level of competition and I can’t wait for these next three races and then the Countdown.”

This weekend Ashley will be racing for his fifth career Top Fuel win also looking to celebrate Epler’s accomplishment from nearly 30 years ago. Ashley and Epler have developed a strong rapport this season beginning when Ashley spent a week at the Phillips Connect headquarters in California. Throughout the season Epler has supported Ashley through the usual highs and lows of the year.

“It has been great working with Jim on and off the racetrack,” said Ashley. “He was one of NHRA’s most innovative team owners and the importance of his knowledge, experience and expertise could not be more valuable. We are excited about the future and look forward to developing a tradition of success on and off the track.”

The success for Ashley and his team has reaped benefits for all his marketing partners through hospitality at the track in the Lucas Oil hospitality tent beside Ashley’s pit area as well as autograph sessions at the Toyota Gazoo Racing North America display. Ashley’s business associations with KATO Fastening Systems, Lucas Oil along with his technical relationship with Antron Brown Racing continue to make his team stronger with every race.

“You are only as good as the people you surround yourself with,” said Ashley. “Dustin Davis, Mike Green, Tommy DeLago, and our team work tirelessly to turn on win lights. All of which is possible because of the constant support we receive from our marketing partners. This is only the beginning and I know there is a lot more success on the horizon for us.”

Qualifying for the Menards Nationals presented by Pet Armor will begin on Friday. Ashley will be looking to once again for a strong qualifying effort as the team heads into race day on Sunday. The race will be broadcast on FS1 nationally from 2 p.m. to 5 p.m. ET.