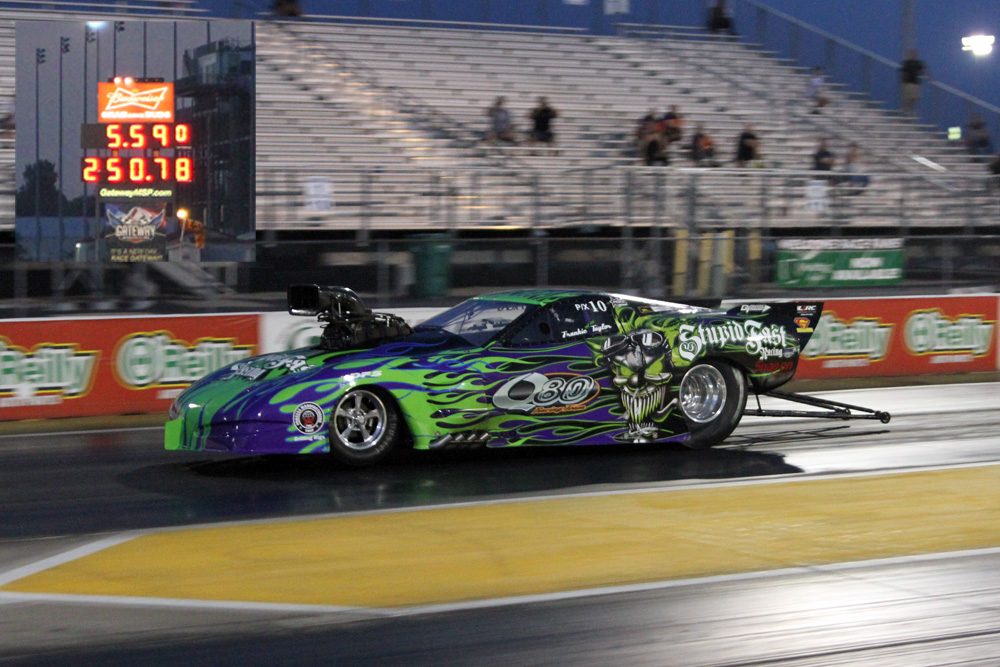 Following the completion of the first-annual PDRA “Under the Lights” event in Tulsa, Oklahoma, Frankie “Mad Man” Taylor and his crew chief/brother, Paul, found themselves entirely too close to Gateway Motorsports Park to resist continuing north from their home in Dickinson, Texas, to try their hand at the outlaw quarter-mile during Mel Roth’s Street Car Supernationals in St. Louis.

Their stated goal for their trip to “Anarchy at the Arch” was to reset the world record for an unrestricted doorslammer, which was currently held by John Stanley with a 5.644-second lap made last fall in Las Vegas. In their very first pass, the Taylor Bros. did exactly what they set out to do, posting a mind-numbing 5.590-second pass in their Larry Jeffers-built Corvette on a planned early shut-off pass that netted only a 250mph trap speed.

World-renowned tuner Billy Stocklin confirmed with DRAG ILLUSTRATED that he believes Frankie Taylor’s 5.590 is indicative of 5.40-second potential for a top-tier Pro Extreme-style doorslammer, or possibly even 5.30s given the necessary conditions.

DRAG ILLUSTRATED’s James Sisk and Jason Dunn were on hand for the historic pass – their photographs below.

UPDATE: During the second round of qualifying Taylor stepped it up with a 5.550-second, 260mph blast to continue re-writing history.