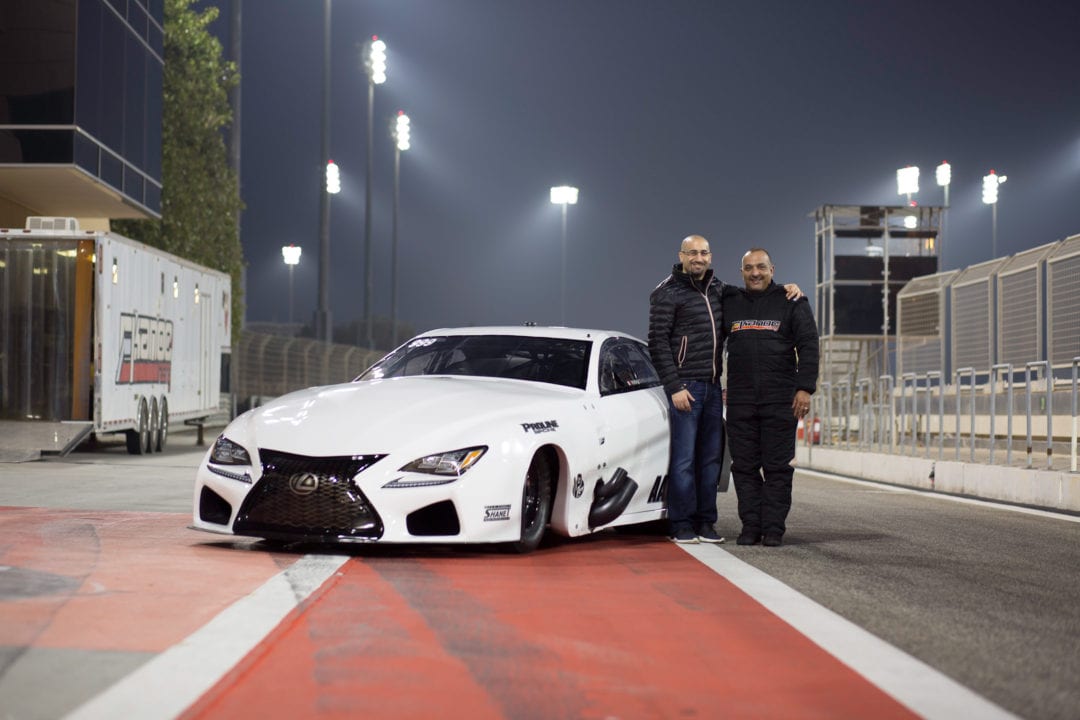 While the team was preparing for another Bahrain Drag Racing Championship (BDRC) event, their pride Lexus was making some strong runs to the eighth-mile in preparation for the event. But as the test session came to a close, the team came to the conclusion that their impressive eighth-mile marks were more than enough to see the well-known doorslammer dip into the 5.3-second zone over the quarter-mile, and likely encroach 280 miles per hour. So, why not let their skilled wheelman Khalid Mohammed leg it out the backdoor?

Following the run, just after Mohammed lifted on the throttle, as the front end came back to the pavement, a shower of sparks came from underneath the car as the titanium chassis savers did their job. Simultaneously, however, the passenger side door skin ripped free of the Lexus RC-F body. 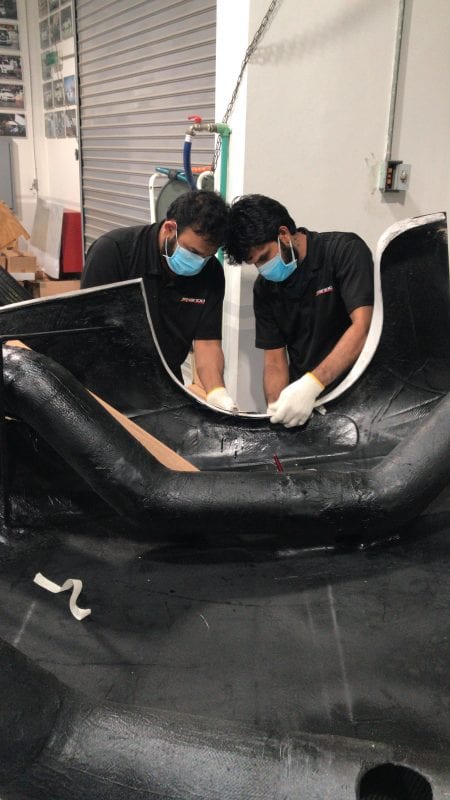 As this all happened, Mohammed pulled the parachutes but only one deployed and even then, not properly, leaving Khalid with a handful of steering wheel and a foot full of the brake pedal, taking both front tires down to the wheels and performing his best drift impression to scrub speed before the sand trap. He was able to keep the car out of the sand trap, but did have a slight scrub with the concrete retaining wall being that he lost steering, but after the 278.79 miles per hour run down the quarter-mile and only one parachute worth of stopping power, he was able to save the record holding Lexus and himself from major damage.

The EKanoo Racing Lexus RC-F relies on a 521-cubic inch Pro Line Racing built HEMI powerplant with a set of Precision Turbo Gen III 94mm turbochargers supplying the boost through the intake manifold to propel the chassis fabricated in Bahrain at EKanoo Racing down the raceway. Billet Atomizer Injectors flow the methanol through the engine into the cylinders for combustion and the custom software MoTeC M150 Vehicle Management System controls each individual cylinder’s timing and fuel as well as the transmission, suspension, boost and power delivery systems.

Pro Line Racing owner Eric Dillard mentioned, “PLR is extremely proud to be a part of this huge achievement. The accomplishment is a testament to the hard work and passion that the EKanoo Racing team puts into their program.”

M&M Transmission provided the drivetrain with their complete package of a 3-speed transmission, custom built torque converter and their revolutionary billet shifter in the driver’s compartment, which is controlled during the burnout via paddle shift on the steering wheel by Mohammed and automatically during the run by the MoTeC system.

The custom-designed chassis built in-house at the EKanoo Racing Factory in a scant 45 days, has been one of the most consistent and reacting setups yet for the team and they continue to push the limit and defy all odds with astounding performances, one after another. 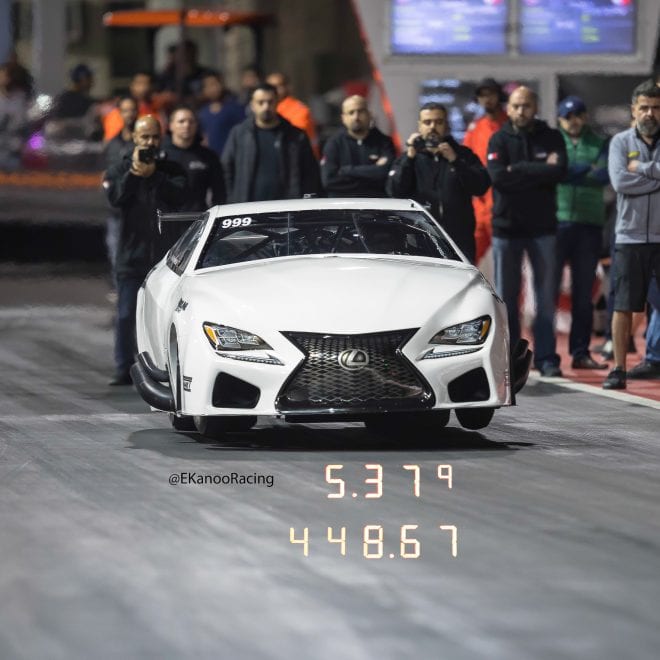 “We’ve been trying a lot of new concepts over the past few test sessions and we’ve locked in on a setup that continues to impress us all lap after lap. Khalid has mentioned the car is driving better than ever before and when running world record elapsed times and speeds, driver comfort is key,” explained Jamie Miller, tuning extraordinaire for both EKanoo Racing and Pro Line Racing.

“This is a great day for us as we now have been the first to eclipse both the 3.5 second zone in the eighth-mile and the 5.3-second zone in the 1/4 mile,” noted Tecklenburg, who handles engine tuning and power management duties along with Miller and Rees and who wrote the control software for the vehicle. “Now, we can explore some of Jamie and Mikey’s ideas for improving the front half of the race track and see where that takes us next.”

Car chief and assistant tuner, Rees quipped “Man, racing with and winning the NHRA Championships with Troy (Coughlin) was some of the best times of my life, but damn, running this car with EKanoo Racing is just plain bad ass.”

Currently, the car is being repaired with a new door skin and paint in effort to be ready for the first round of qualifying just a short twelve hours later after the record run and the near catastrophic shutdown.

The EKanoo Racing team has changed their outlook back to the eighth-mile performance levels and going after yet another Bahrain Drag Racing Championship event win in their home country of the Kingdom of Bahrain. 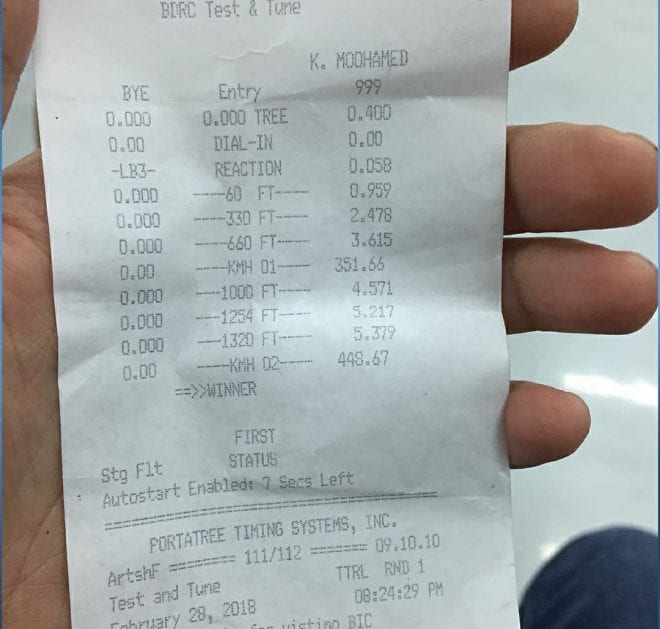