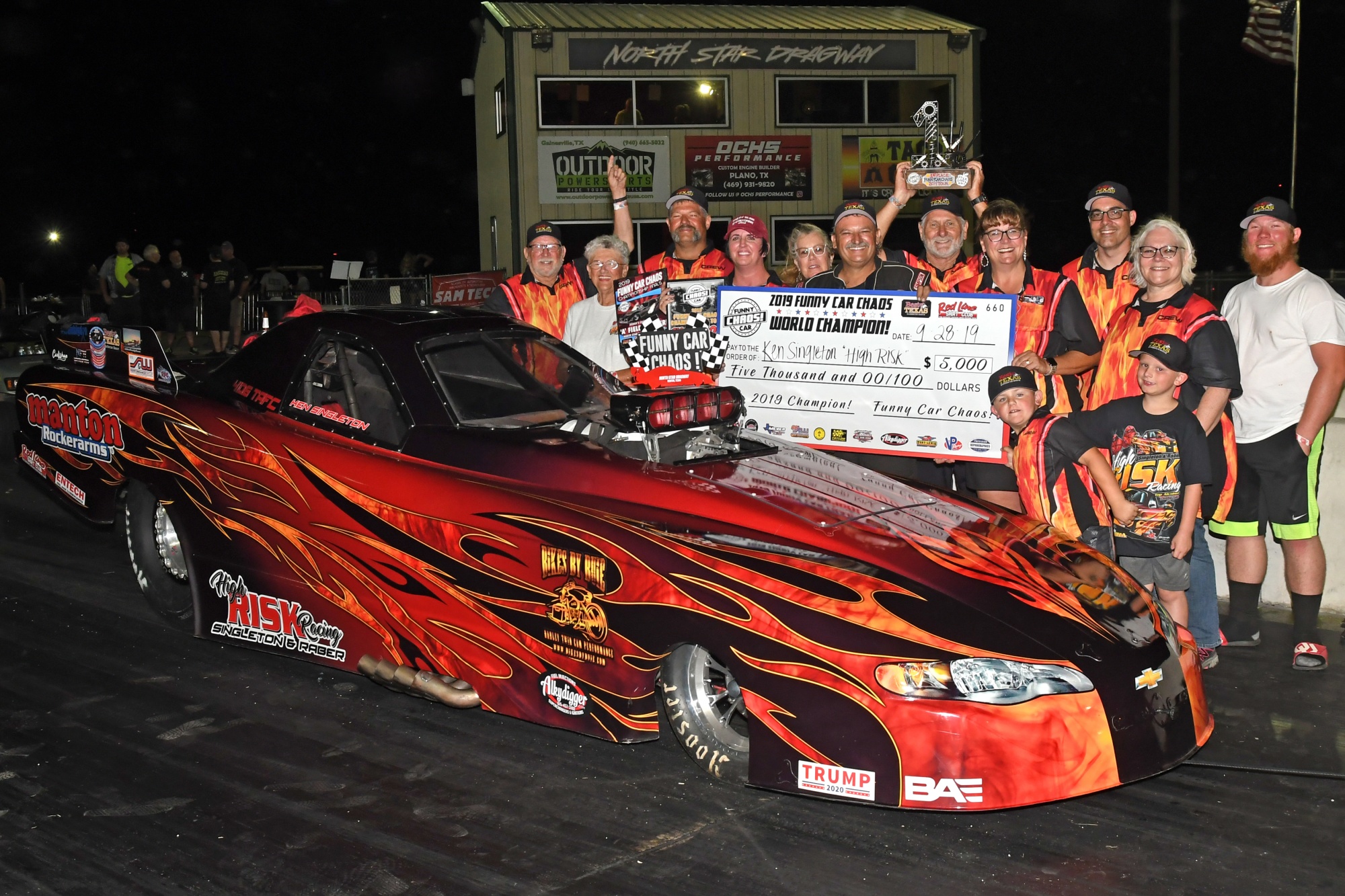 The debut of the Funny Car Chaos Championship points tour made big waves in the flip-top flopper world as the series expanded in 2019 to seven races from Texas to Michigan. With points on the line for the first time, excitement built as the season progressed and the inaugural title contenders established themselves.

With support from Best of Texas BBQ Sauce and Red Line Shirt Club, the Funny Car Chaos Championship battle was on and it all came down to the final event of the season and an epic conclusion in Texas. Ken Singleton and the screw-blown “High Risk” Monte Carlo from Chickasha, Oklahoma, was the last one standing and capped off an impressive championship effort with an A-field win at the final race of the season. But it was no easy feat for this former boat racer.

With 51 Funny Cars entering Chaos competition in the 2019 season, Singleton and company had plenty of opposition to contend with and a target on their backs after winning the A-field in all three events they entered in 2018. Singleton led the points standings for a majority of the season, stacking up A-field runner-up finishes in three straight races during midseason.

Allan Middendorf and the Jake Sanders-tuned “American Outlaw” nitro burner became the biggest threat to Singleton’s title efforts with two events remaining. After breaking both ends of the series performance records and defeating Singleton in the final round at U.S. 131 Motorsports Park, Middendorf went into the final event of the season gunning for a come-from-behind victory, but a 227-mph trip into the sand trap during the final qualifying session at North Star Dragway unexpectedly ended those hopes.

It certainly wasn’t how Singleton wanted it to be decided, but with Middendorf out of competition and Singleton’s march through the A-field eliminations and into the winner’s circle at the final event, the title was all his and team “High Risk” celebrated in fine form as inaugural Funny Car Chaos world champions. Middendorf held on for a second-place finish followed by Brandon Lewis, Jordan Ballew and Tod Barker.

Funny Car Chaos will charge into 2020 with an eight-race points tour across the central part of the U.S. Singleton and company will again have a target on their back in their title defense effort as rumors in the pits indicate numerous cars are Chaos bound next season.