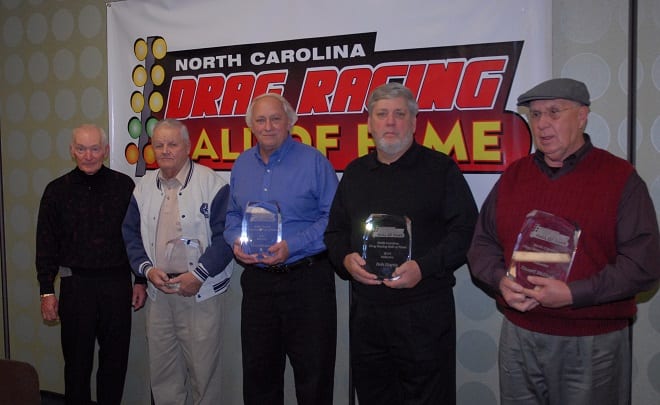 Even with severe winter weather in the Carolinas, the families and inductees of the North Carolina Drag Racing Hall of Fame gathered on February first to recognize the latest class of inductees. Since the first group of inductees was presented in 2007, the event has grown leaps and bounds, with this years’ class being comprised of Deat Buckner, Jake King, Stuart McDade, Don Plemmons, and Bob Harris. Receiving a new award, the Pioneer Award, was Bob Oseiki, with Jerry Pierce, founder of the Hot Rod Barn, taking home the Jeff Byrd Memorial Lifetime Achievement Award.

Introduced by former boss, Buddy Martin, Jake King finally took his place with Ronnie Sox and Buddy Martin in the Hall of Fame, a place we all know Jake would have humbly accepted, as was his nature. With stories told of King’s attention to detail and some humorous stories, as well, it was agreed by all that his induction was long overdue.

Next up was Mark Joyce to introduce Deat Buckner, one of the winningest sportsman drivers anywhere in the U.S., but particularly in the Carolinas, with over 500 event wins and national awards, such as the prestigious Car Craft All Star award, on several occasions. Now guiding the career of son, Colt, Deat shared with all of us that two new cars are on the way for competition to be driven by Colt and, oh yes, Deat.

Next up was NC Drag Racing Hall of Fame Executive Director, Jim Turner, to present the one and only “Big Daddy” Bob Harris, a name given to Bob during those world famous Big Dog Shootout events he and Jim started 16 seasons ago at historic Piedmont Dragway. Bob shared a passionate description of being a full-time big-money bracket racer supporting a family with winnings, successful to the point that he eventually was co-owner of Piedmont with Jim. Now directing the day-to-day workings of the very successful PDRA, with its second season upcoming, Harris has graduated to being director of a racing series and proud Dad of Jason, the Pro Nitrous Champion in 2014’s PDRA campaign.

Gary “Hooter” Hoots was given the task of introducing Don Plemmons, founder of the long-running Quick 8 Pro Mod series, as well as being owner of Farmington Dragway for many years. Also introduced by his son, Plemmons’ message was simply that, “He just loved drag racing” and we ALL appreciate that in Don.

Bob Oseiki received the inaugural Pioneer Award for his being on the cutting edge of the beginnings of not only drag racing, but round track racing. Founding one of the first drag strips in the Carolinas in Chester, SC, Oseiki went on to design and build the first electronic timing system on the East Coast, being a founder of the NASCAR drag racing series in the mid ‘60s, but was probably best known for being Art Malone’s car owner when “Big” Bill France put up $10,000 to the first man to turn a lap over 180 MPH at the new Daytona Speedway in 1959.

Jerry Pierce, founder of the Hot Rod Barn, was presented by Bill Blair and Roy Hill, so you knew big things were in store. With his introduction that included many stories from past racing events, Pierce presented all in attendance with a complete copy of his speech, saying a simple “thank you” and that he had been told to hold his remarks to 10 minutes or less. Feeling it would take much longer to accomplish this, Pierce told everyone to, “read this for themselves.”

In closing, director of the NC Auto Racing Hall of Fame, Don Miller, announced that a drag racer would finally be given a place in the Auto Racing Walk of Fame in Mooresville, NC with a date to be announced. The honoree will actually be a team, the team of Sox & Martin. Miller also announced an agreement to put the Pro Mod Comet of Ronnie Sox on display at the facility in Mooresville. Please be looking for the date of this important event in our sport, and we hope to see you there.

(Story and photo by Greg Burrow)