Jack Beckman spent six months near Denver in 1984 for training when he was in the U.S. Air Force. He knew well of the nearby, top-secret Cheyenne Mountain Air Force Station facility better known as NORAD but never imagined one day he would be able to tour the facility used extensively during the Cold War.

“Yeah, and I never thought I’d be classified as a VIP,” Beckman joked.

But the popular NHRA Funny Car driver will be among a group of drag racers on Thursday to get a VIP tour of the facility near Colorado Springs, Colo. The group will have lunch with men and women stationed at the noted operation before visiting the subterranean facility to see the industrial complex, command center buildings and support facilities. 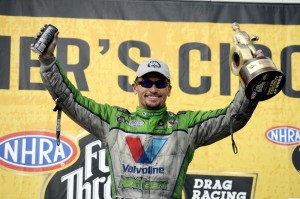 It is a unique way for Beckman, who drives the Valvoline NextGen Dodge Charger R/T for Don Schumacher Racing, to kick off his visit near Denver for the Mopar Mile-High NHRA Nationals that begins Friday at Bandimere Speedway at Morrison, Colo.

“I’ve been invited to go on the tour the past five years but it was logistically impossible for me to get there,” said Beckman, who is ranked fifth in the NHRA Full Throttle Drag Racing Series Funny Car standings.

“I am so looking forward to going out there. When I went to (Air Force) tech school near there I was aware of NORAD but never thought I’d get inside.”

Beckman, 46, retired as a sergeant after being part of the Air Force Tactical Air Command.

“I always wanted to be a pilot, but you had to go to college,” he said. “They wouldn’t accept my degree from the College of Hard Knocks.”

The tour of NORAD is a unique way for Beckman to start one of the most grueling sections of the Full Throttle schedule. The Mile-High Nationals is the first of four NHRA events on a 4,705-mile, five-week trek. 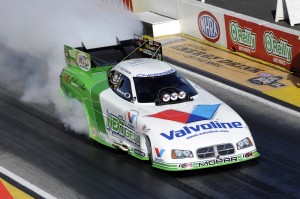 The Bandimere race starts the three-race, three-week Western Swing that continues with stops at Sonoma, Calif., and Kent, Wash. After a one-week break, the series resumes Aug. 16-19 at Brainerd, Minn.
The odyssey begins with the most challenging race on the 23-race circuit because the thin air in the mile-high altitude chokes power from the 8,000-horsepower, nitro-fueled machines.

“It doesn’t affect the drivers as much as the crew chiefs,” he said. “They work all year to come with a tune-up combination, and all the information they get from Bandimere can’t be used at the other 22 races.”

Beckman, who has won one title this season with crew chief Todd Smith, said drivers also have to adjust.

“When we get strapped into the car and they squeeze the harnesses down tight over your chest it can take a few minutes for you to be calm with your breathing. Then it’s harder to get the engine to start and after it does start it sounds funky.”

Beckman said another unique factor to Bandimere is a track cooling system near the starting line that runs cold water through coils embedded in the concrete that runs from the burnout area to about 120 feet past the starting line. It makes that section 20 degrees cooler than the rest of the track surface.

And on this trip, Beckman can’t wait to get under the mountain at NORAD.