The ’67 Chevy II stationwagon (above) of Iron Station, NC’s Jim “Hollywood” Tench managed a best of 5.285 at 134.56 mph to place 70th in a massive field of 72 Leaf Spring entries at Lights Out 6, the huge drag radial event held Feb. 19-22 at South Georgia Motorsports Park, near Valdosta. 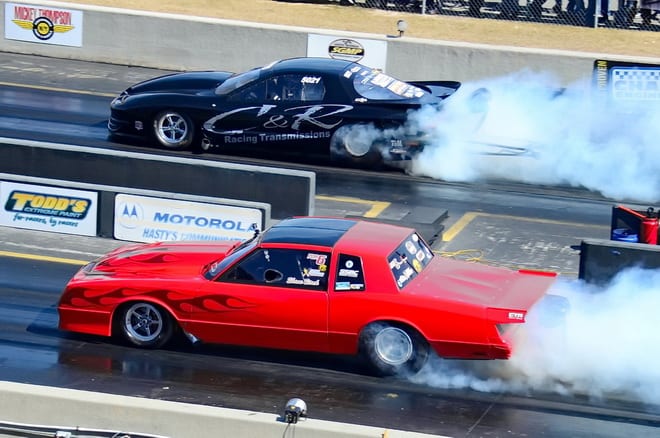 Shane Stack of Huntsville, AL, attended his high school prom about 20 years ago in this beautiful ’86 Monte Carlo, but now campaigns it as a twin-turbo’d terror in eighth-mile drag radial competition. Stack ran 4.621 at 178.87 mph to place 27th in the 32-car Radials vs. The World class at Lights Out 6. He improved to 4.546 at 163.39 in round one of racing, but still fell to Brad Edwards.

Despite breaking out with a 6.982 pass in round one of 7.0 index action, Bill Jones and his ’68 Falcon were the lesser of the offenders and advanced to round two. Unfortunately, the Lake City, FL, driver repeated the transgression with a 6.975 run in round two, losing to eventual event winner Kenny Ford. 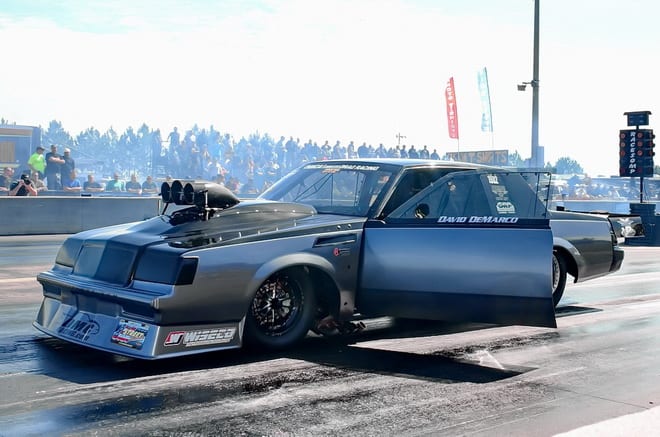 Twin brothers David and Andrew DeMarco showed up at Lights Out 6 with a new roots-blown Hemi built by Bob Mason pumping out the horsepower for their ’84 Buick Regal. After four rounds of Radial vs. the World qualifying, David drove the car to a 4.482 at 186.23-mph pass that put him 21st in the 32-car field. He significantly improved to 4.208 at 187.78 in a first-round win over Missouri’s Mike Kimmis, but fell with a 4.232 at 185.10 in round two against eventual event winner Stevie Jackson.

Ocala, FL’s Chad Opaleski made a nice 4.271-seconds pass at 181.13 mph to qualify his muscular-looking ’66 Chevelle third in the always-tough Outlaw Drag Radial class. After torching one of the heads on the Procharger-equipped Hemi on Friday night, Opaleski and crew recovered to reach the third round of eliminations, but once there they couldn’t hold off the hard charge of past event winner Chris Tuten.

If it’s Lights Out, then Ron Clark and his fan-favorite “Bugzilla” have to be there! Unfortunately, the blown 377 up front in the ’70 VW Bug was good enough only for a 5.216 at 136.73 in Radial vs. The World qualifying, leaving Clark 34th and just outside the 32-car cut for race day action.

Ron Fisher struggled to get his new ’68 Chevelle to hook up for Radial vs. The World qualifying in its debut outing at Lights Out 6. Other than the big Mike Janis blower jutting through its hood the car is remarkably stock appearing.

A 5.115-seconds pass at 137.46 mph put Jason McGrane and his naturally aspirated, big-block-Ford-powered ’64 Fairlane into the 24th qualified position for Ulimate Street. Owned by Lester Combs of Greenwood, IN, the car fell short of Michael Strickland and his 2000 Firebird in round one of racing, however.

Perhaps the most unorthodox drag radial racer on the SGMP grounds was the Hemi-powered ’07 Jeep by Al Gennarelli of Gates, NC. The high-flying four door posted a best run of 5.096 seconds at 138.87 mph to qualify 27th in the 32-car Outlaw 275 class, but breakage prevented it from making a run on race day.

(Text and photos by Ian Tocher)