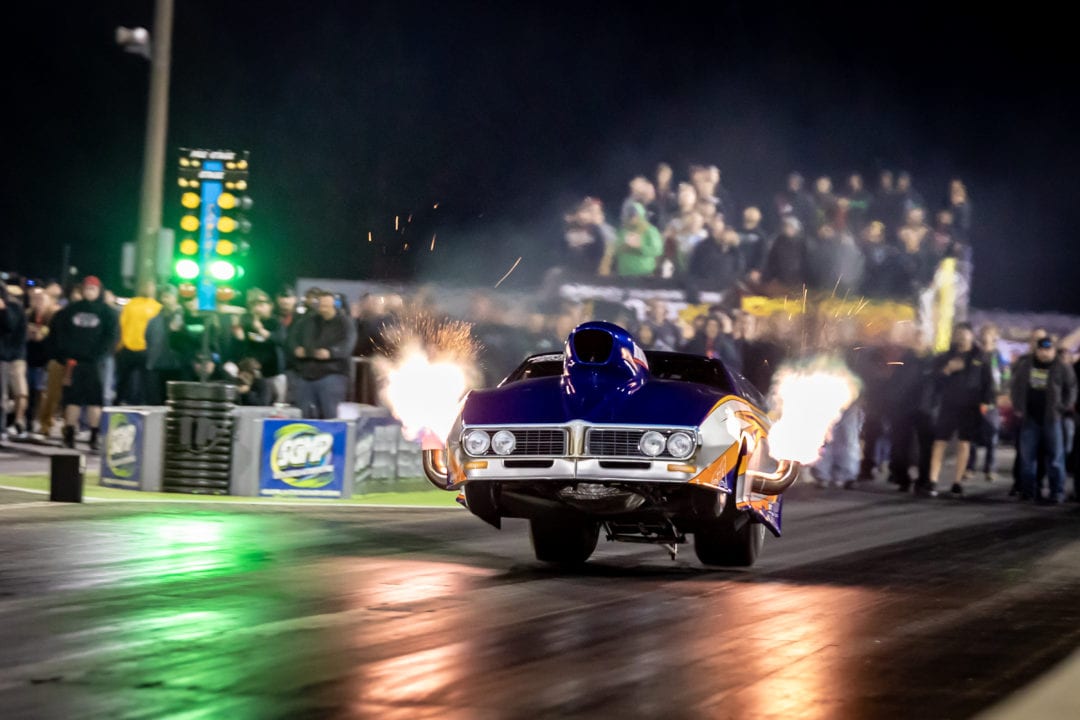 Well, the sequel was every bit as good as the original.

But unlike the second act in a movie series, where it usually adds more but ends up feeling bloated, the scene in Valdosta was just as thrilling. We saw record runs in both Radial vs. the World and X275, record qualifying fields and one incredible moment after another.

It was so enthralling it was hard to narrow it all down, but here are 10 top unforgettable, wild and awe-inspiring moments from “Sweet 16 2.0” that will have us talking until part three comes along.

RIVENBARK RUNS IT BACK: There was arguably even more pressure on Kevin Rivenbark this time, but he handled it all in impressive fashion. After going red in the semifinals at Lights Out 10 a month ago – with what many deemed the car to beat – Rivenbark made amends in a major way in his ProCharger Camaro at the Sweet 16. It started with becoming the first in the 3.50s, which added even more pressure. This time, Rivenbark thrived with the extra eyeballs on him, beating Norman Bryson with a stout 3.63 in the money round.

The guys at ProLine have taken a special interest in Rivenbark and his car, and it’s been incredible to see the progression on radials. But with that comes a great deal of pressure and Rivenbark proved he was up to the task in Valdosta last weekend, making amends for Lights Out and proving he’s a top performer in big-money, high-pressure moments. If there’s an award for most-promising-new-engine-combinations, this ProCharger-equipped Hemi is a lock.

BRUDERS ALWAYS RISE ABOVE IT ALL: Whatever Rich and Nick Bruder choose to do, there’s usually drama and controversy not far behind. They’ve gone from ProChargers to turbos to a roots-style supercharger and back to ProCharger, but there’s something unique about how whatever the combination is, they’re going to thrive with it. That’s a definition of a true bad ass race team, and the fact they do it all together as a family makes it even better.

It was all on full display at the Sweet 16 and Rich Bruder delivered a record-breaking 4.235 in the final round to win the $50,000 prize. It was a dominant performance on a huge stage and again proved whatever controversy and drama they’re involved in within the class, they’re going to rise above it when it counts.

BIRT’S NITROUS BLAST HEARD ROUND THE WORLD: As far as singular runs go, there might not be anything that drew more talk than Marcus Birt’s stunning 3.604-second lap in his Pat Musi-built, nitrous oxide-assisted C7 Corvette. You could see the burn marks and the smoke on Facebook mere moments after the Stevie Jackson-tuned car made the quickest 1/8-mile nitrous pass in history – a truly remarkable feat, especially considering the monumental effort came on a set of 315-series radial tires and without wheelie bars.

Nitrous cars on radials were basically left for dead in recent weeks, most notably perhaps following a press release issued by Keith Haney announcing he and his nitrous-powered Camaro were withdrawing from Sweet 16 competition based on a perceived performance disparity, and Birt/Jackson made them all look silly in a hair over 3.60-seconds.

Interestingly, this singular run reminds us once again how important merely “going fast” is to drag racers. Despite not winning, it’s a moment in time Marcus Birt is exceptionally proud of (look no further than his 3,431 Facebook Live posts in the last week for proof). It was a historic moment and if that time slip hasn’t already been screen-printed on the back of a t-shirt – it should be soon. The ripple effects are huge, not only for radial racers, but also “bottle boys (and girls)” around the world. We’d be shocked if the PDRA wasn’t game planning this very moment on how to rapidly regain rights to the world’s quickest nitrous doorslammers with their Pro Nitrous division.

MARINIS MATTERS: On the other end of the spectrum, Dean Marinis was the only nitrous car to qualify in X275. It’s a great story of one of the original stars and pioneers of small tire racing being involved in what is inarguably the biggest race in X275 history, and we’d argue that it would have been a crime if he weren’t involved. But does it showcase a bigger issue in the class that there’s not more nitrous parity? We saw how Birt solved that in RvW, so we’ll see what happens in X275, but we know Marinis will keep parading the nitrous bandwagon till the bitter end, and likely with impressive results. 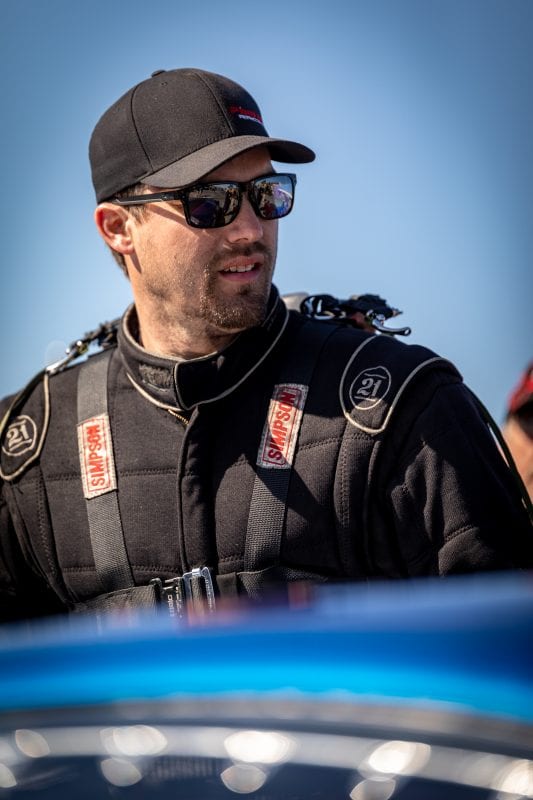 A FEATHER IN PHARRIS’ CAP: Daniel Pharris left Georgia with the quickest radial tire-equipped race car on the freaking planet – no argument. Considering what’s gone on in the class over the last couple years, that’s a pretty significant thing. His blast of 3.578 at 214 mph last Saturday was a thing of beauty and earned him a spot in the record books, but as we’ve seen time and time again…it likely won’t last long. He should enjoy it while it lasts.

Also, for what it’s worth, Pharris is our collective pick to win No Mercy this fall (regardless of where it’s ultimately contested). He’s beyond due for a win at a DuckX Production, and it’s clear-as-day his program is win-worthy. If he doesn’t win it all come October, we’ll eat our hats (some of us will, possibly consider it?).

STOCK SUSPENSION SUPERIORITY: I mean, how cool is it that Brad Edwards ran 3.691 at 202.09 in a stock suspension Mustang? Yeah, that one is rhetorical because it’s painfully cool. Edwards may be “Last of the Mohicans” with that set-up, making it all the more impressive. The type of pass stunned everybody, but further showed the ingenuity and determination of Edwards – an undeniably low-buck drag racer. That type of success is what the class has been built on over the years and it’s awesome to see Edwards have a weekend like he did, picking up a round win as well.

BUMP(S) OF THE CENTURY: For Radial vs. the World to have a bump of 3.69 doesn’t seem possible. A year ago we were going wild for the first run in the 3.60s, and now you’ve gotta run in that range to freaking qualify. It’s pure madness. But the coolest part of that whole situation is the fact that those numbers haven’t really hurt participation. The class is alive and well, despite some belief in recent years that it was preparing to “jump the shark”, but people simply want to be a part of the chaos and excitement that is a DuckX Production. Where does it go from here? Who knows, but we shouldn’t be surprised it it’s seemingly perpetual rise continues for years to come.

As for X275, its qualifying bump of 4.34 was just as surreal. X275 will never be the same after this race. Whether that’s a positive or negative depends on your perspective, but for one weekend it proved it can hang on this type of stage. The performances were outstanding, there are talented drivers galore and what happens next has us all interested. 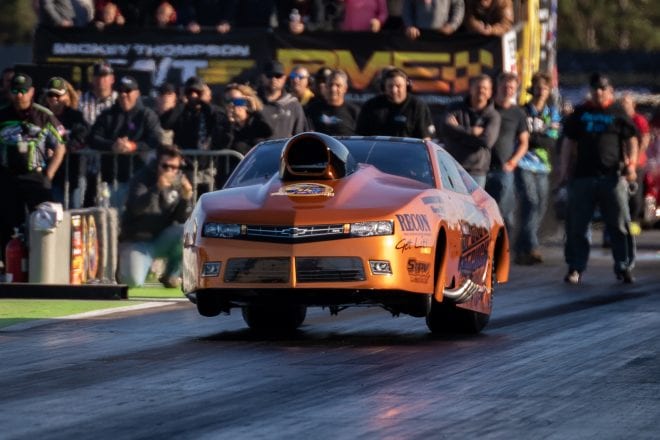 STINNETT’S MIGHTY MOUSE: There are a lot of grandiose adjectives when it comes to a weekend like this, but watching a small-block twin-turbo Mustang blast its way to a 3.694 at nearly 205 mph is just incredible. That’s what Marty Stinnett did and if you can’t appreciate that, well, you probably don’t deserve to be a fan of the sport. The class is so creative, so willing to make the most out of everything and Stinnett is a prime example. Kudos to him and minds like his for helping making RvW what it continues to be. 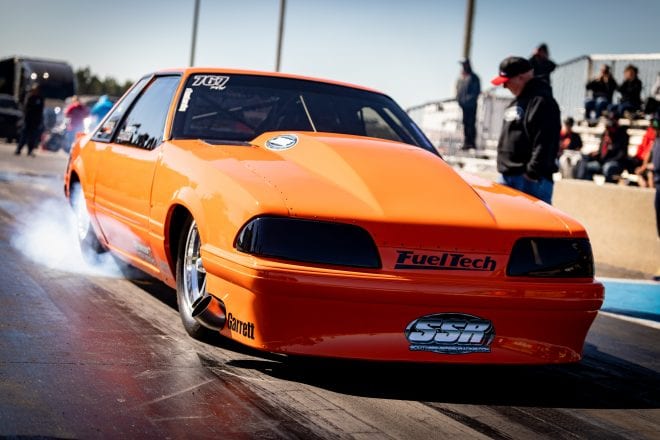 PAIN THAT LASTS A LIFETIME: A year ago, Mark Micke turned the radial world on its head literally every time he went down the track at Sweet 16. A 3.62 here, a 220 mph run there. It was out of this world. And then just last month Alex Laughlin rose to the occasion and won Lights Out 10 with a splendid performance in all areas.

So what happened last weekend? Both lost in the first round, giving us a harsh reminder that this Radial vs. the World class is no joke. It is filled to the brim with players, and the Sweet 16 is a brutal style of racing on your psyche. There are 75 qualifying rounds (nearly) and it’s a war of attrition. Micke and Laughlin are still stars – that will never be questioned – but, man, RvW is as tough as it gets and this weekend exemplified that. 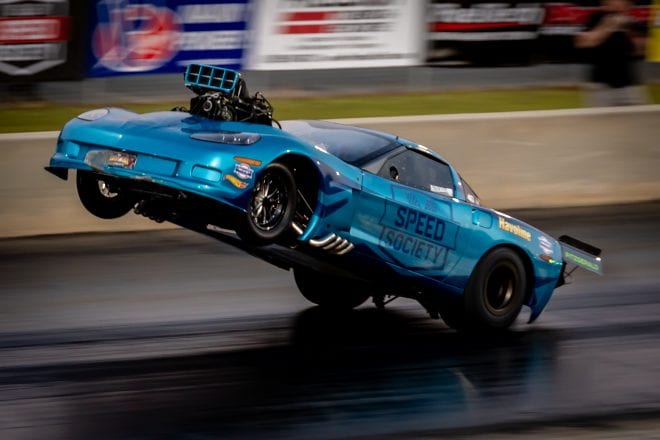 DUCK DROPS THE BOMBSHELL: Within 48 hours of the race being completed, Long announced at least his fall production No Mercy would be relocated later this year – with a lot of people behind the scenes believing that would also include Lights Out and Sweet 16 in 2020. That said, the monumental performances, sweet victories and tragic defeats generated by the second-annual running of Donald Long’s $101,000-to-win blockbuster radial race may have been the last hurrah for radials at South Georgia Motorsports Park. If so, radial racing went out in style and record-breaking fashion at the facility, but this news adds a lot of intrigue as to where these wildly entertaining events will end up, or if they’ll even exist. Will “Duck” be able to recreate the same magic somewhere else? 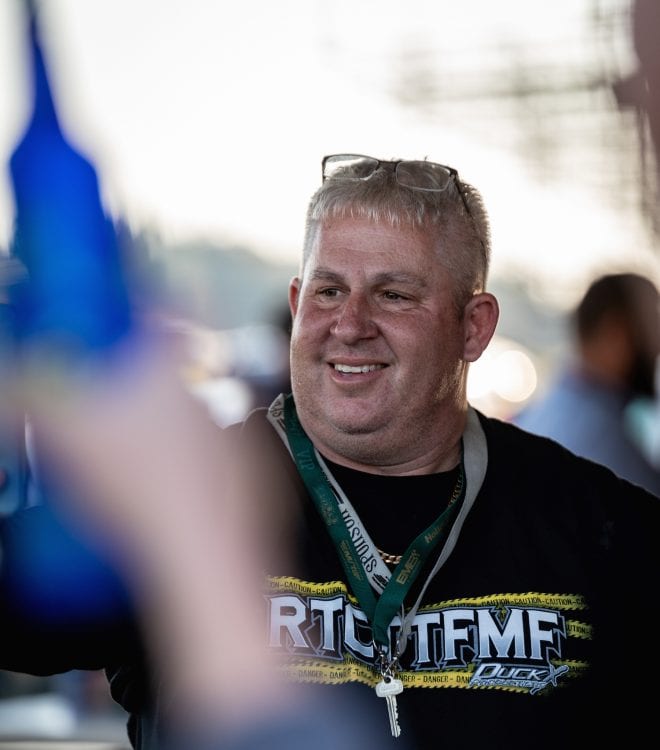