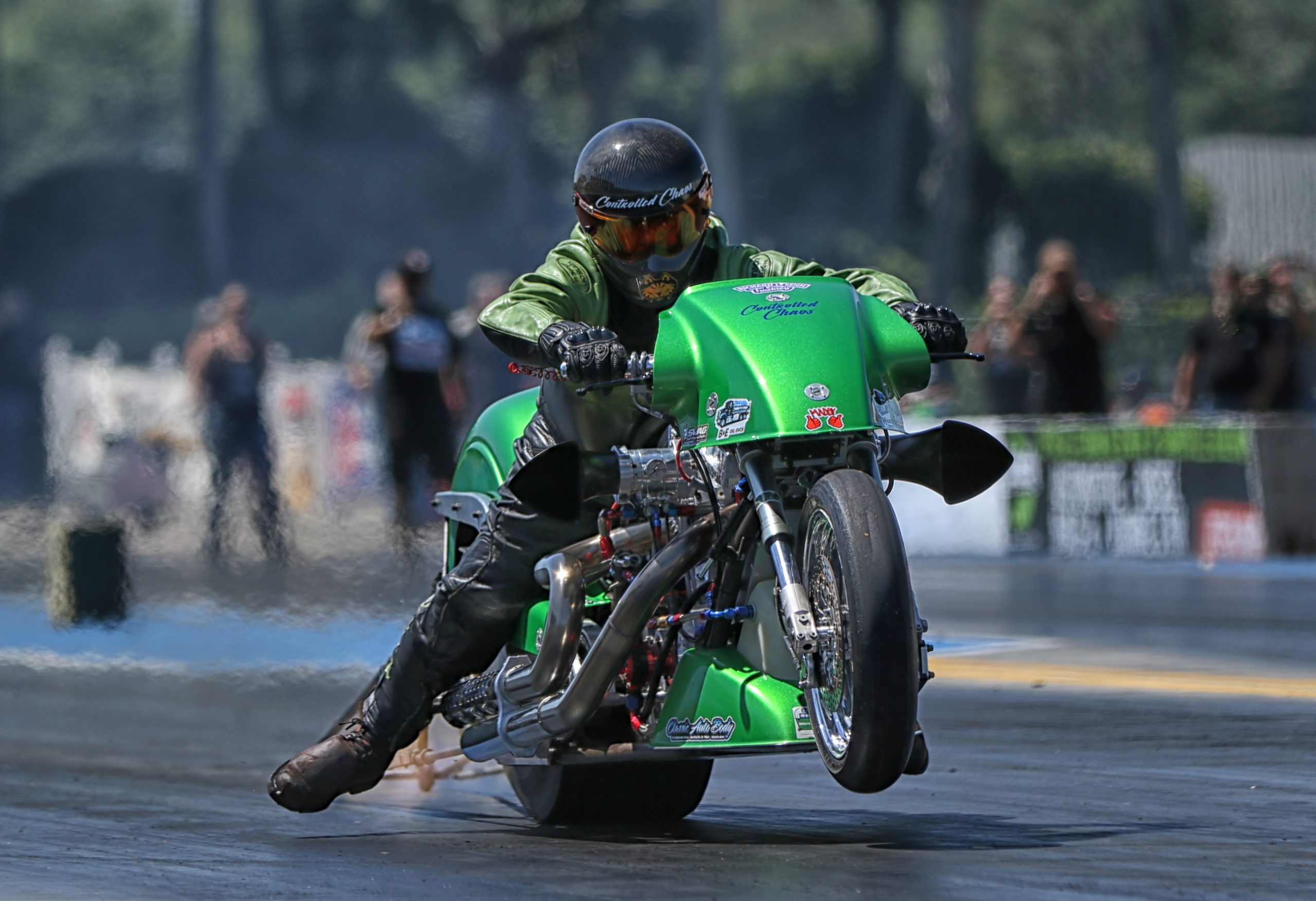 Much like the life of nitro Harley tuner Don “DJ” Johnson, the all-American motorcycle drag race named in his honor ended too soon on April 3rd. Saturday rain shut down qualifying for the AHDRA Don “DJ” Johnson Nitro Spring Nationals sponsored by MTC and Gainesville Harley-Davidson, and dreaded weepers finished eliminations early as the Sunday afternoon sun brought that rain back up through the Gainesville Raceway shutdown area pavement.

Purses and points were divided and distributed according to where each class was in the schedule at the time the event was cancelled. But two nitro classes—Top Fuel and Hawaya Racing Nitro Funnybike—still have their All Harley World Shootout belts to race for.

Top Fuel belt competition will pick up where they left off the next time that all four racers still standing are together again at the same AHDRA event. The class also still has something extra special (and extra valuable) to race for in addition to the belt—brand new 45 degree “Dominator” cases donated in DJ’s memory by 2002 Top Fuel champ Ron Houniet and Fast Lane Racing. That’s an incredible gift by the Canadian Houniet and one much coveted by every racer in the field. 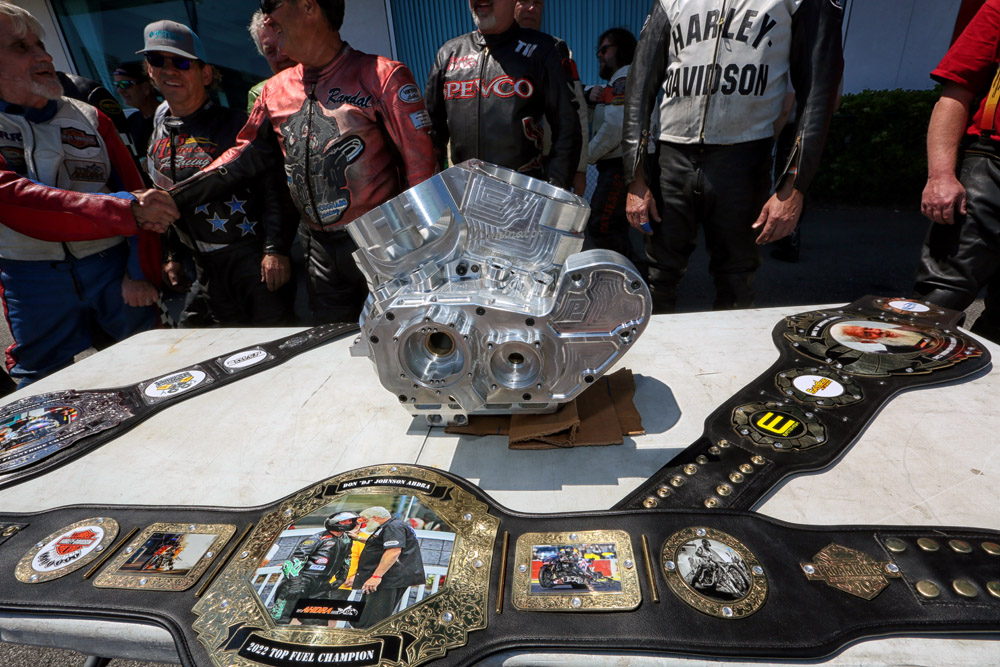 But the only ones with a chance will be current champion Ryan Peery, “Billy Jack” Jackson, Robert “Ziggy” Stewart, and John “JT” Toth. Performance leaders Jackson and Peery will face each other when racing resumes, and Toth will have lane choice against Stewart.

Number one qualifier Randal Andras smoked his tire and his chances against Toth in round 2.

Hawaya Racing Nitro Funnybike will also finish their belt competition at a later date, with champion Michael Balch and Chris Smith (riding Peery’s Funnybike “Big Nasty”) to face off for the honor.

World Finals winner Armon Furr was the Funnybike number one qualifier, but broke and didn’t make the call for round 2 against Balch.

Tadoshi “Reggie” Saito came all the way from Japan to race in DJ’s honor. He lost to Smith in E1, and all of AHDRA hopes that the he and fellow countryman Tak Shigematsu continue to race in the U.S. even though their American tuner/mentor has passed.

The last shall be first, as they say, and that was no truer anywhere than Hawaya Racing Pro Fuel as last place qualifier Sam White posed in the winners circle at the end of the day.

Coupled with a 7.25 in round 1, White was very pleased with his bike’s performance. “We posted a very strong number,” said Sam. “Those were both the quickest two numbers that that Pro Fuel bike has run.

“Over the winter we continued to work on the bike, and it seems that everything that we’ve adjusted has worked well. The MaxxECU is performing extremely well.

“Johnny Vickers’ race shop was under a lot of pressure to get my bike ready, and literally, when I showed up to pick up the bike, the engine wasn’t even in the motorcycle. So they worked into the early hours of Thursday morning so I could get loaded up and then head down to the track. I can’t say enough about Johnny Vickers, and his ability to solve a problem is incredible.

“We did have a little bobble there in qualifying. We took the Goodyear tire off from last season and put a Mickey Thompson on for this season. We had checked everything and nothing checked incorrectly on the motorcycle, so we were a little bit stumped after the qualifying round.

“The sidewall strength and air pressure is different (between the two tire brands), and fortunately there was a video of us leaving the line. Johnny Vickers was able to determine from the video that at about five or six feet out, the tire was spinning too much. And the front tire, rear tire, and wheelie bars were all on the ground at the same time. And that’s when he looked at me and he said, ‘Sam, we need to fix one thing on the motorcycle, and it’s gonna run just fine.’ And he raised the wheelie bars two and a half inches. That’s the only adjustment we made, and of course, you saw the results and I ran 7.25. That’s a pretty good number to post on a Pro Fuel bike.

“I love this sit-up style bike. For a small man like myself, it makes me compact upon the bike. But it makes it easier for me to drive and to control it. So I’m a real big fan of that sit-up style.

“The Terminator bike that I won on, I can tell you that is the results of us testing all kinds of parts and pieces on the old Terminator bike. And the things that we learned, we applied them to the new one. And the overall objective is that everybody is gonna get these parts in the Pro Fuel category.

“And my objective with Johnny was ‘Can we get our whole group to move down closer to a 7.0 pass? And every now and then somebody runs a 6.99?’ That would be awesome. That’s what we’re trying to do.”

Pro Fuel number one qualifier Kirby Apathy has seen those sixes in the past, but he broke the crank on his round one bye run and was done for the day in Gainesville. 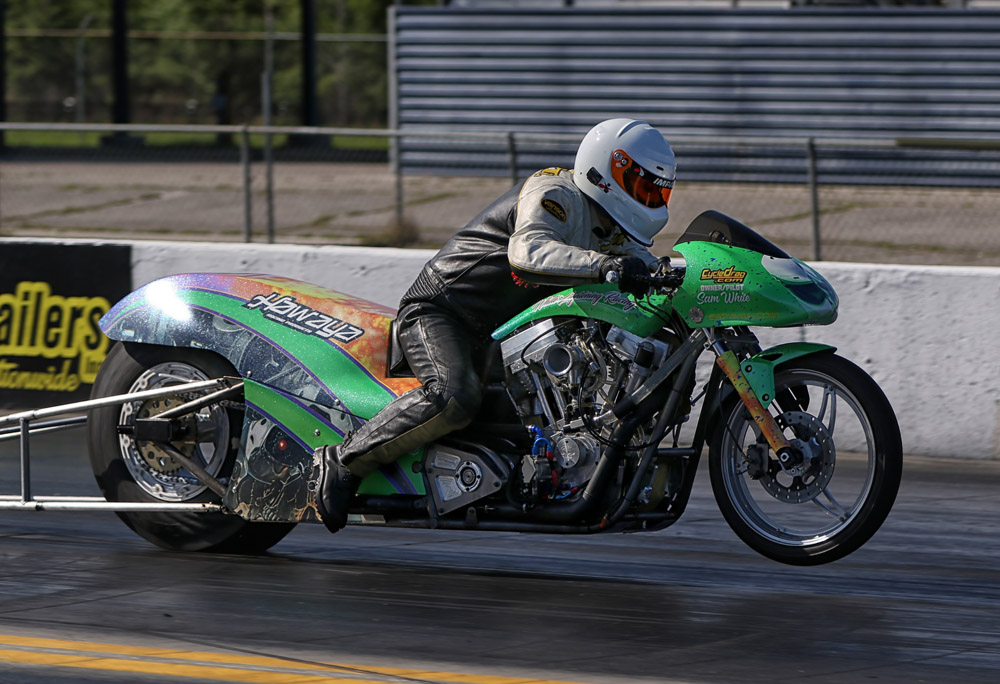 In addition to Vickers and Hawaya, White was adamant to thank his wife April. “She has done an outstanding job. If you notice our team shirts, and any kind of media stuff, April does all that. She takes care of prepping the bus before it leaves, actually feeds the crews, and she works the line, wipes the tire down when I roll across the water. My wife is making it much easier for me to go racing.

“And Miss Leanne Purvis. Leanne takes care of anything we’re missing, she is always there to help us. Johnny and Leanne are great.”

The cross-sanction IHDRA Bagger series was able to get their classes complete before the end of the day.

“Traveled 1300 miles in some sketchy weather to get this second win of this ‘22 season,” said Tomsu. “I finished the ‘21 season with four wins, so we have a six race winning streak at the moment.

“I would like to thank my sponsors STFU Motorcycles, Ward Performance, GRC Cranks, and Lyndall Brakes, for building this beast.” 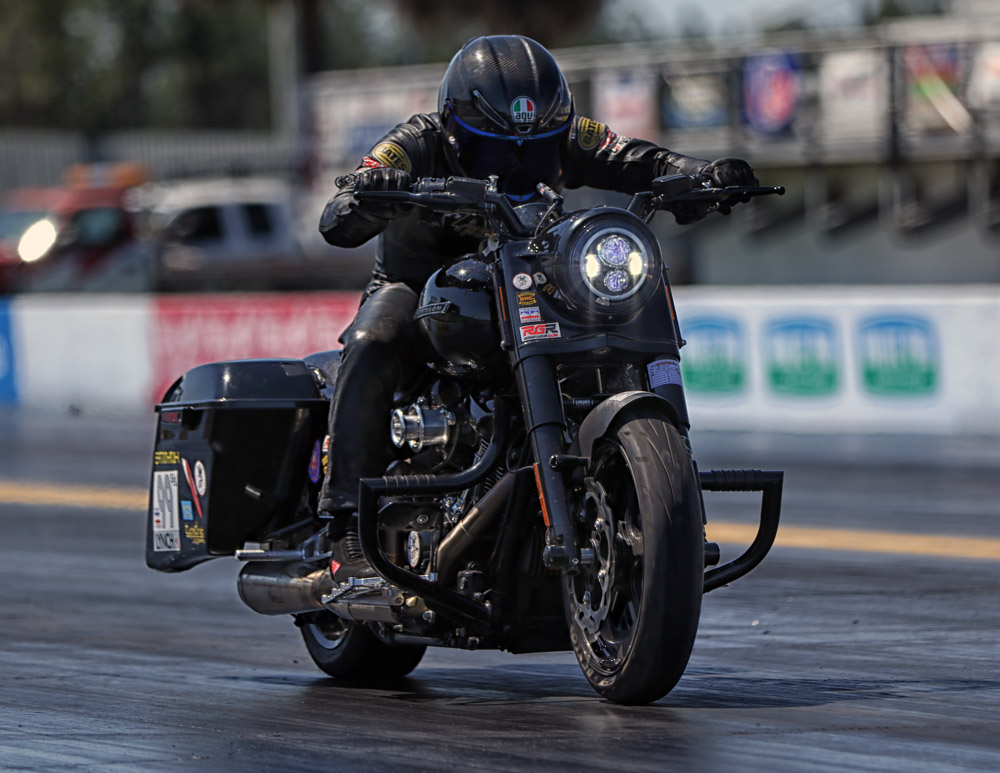 In his first ride with 187 Custom Cycles, Richard Gadson qualified number one and won the stock wheelbase Super Stock class—beating Chuck Ragan in the final. “He treed me and made sure to let me know about it, too,” laughed Gadson, who put a 9.97 on the scoreboard. “But I believe I should’ve/could’ve run probably a 9.90 flat or so. But I goofed up the shifting a little bit, so .80’s is the new goal.

With their own Outlaw bike broke, Gadson and the 187 team then took their Super Stock knife to a Horsepower Inc. Pro Outlaw Bagger gunfight. “I missed a gear going from second to third, but I didn’t have anything for him anyway,” said Gadson, who was riding the SS bike in the class just to get points and lost to Reggie “Hamma” Elliott, who also qualified number one.

The correct tool for Hamma was “Dolomite,” a 2017 CVO owned by Snowman. “The bike is a frame-up build performed here at Streetkings,” said Hamma. “145 inch motor built by us, heads by Rick Ward, crank by Darkhorse, HPI throttlebody, BST wheels, Mad Monkey swingarm, and Star pistons.” 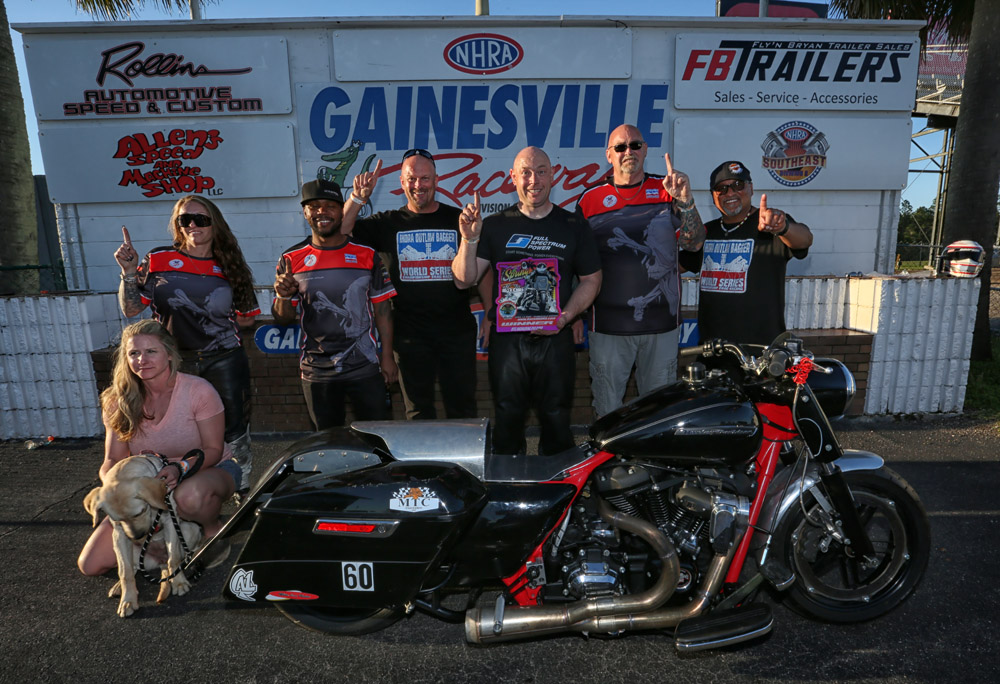 Full-time firefighter and part-time Harley mechanic Julius DeManss won MTC Pro Comp Outlaw on his 2017 Road King when would-be final round opponent Victor Gotay crashed on a semifinal bye. Clean-up of that crash revealed the shutdown area weepers that ended the day. Gotay broke a collarbone but was all smiles after a blistering 8.62 at over 161 mph before he went down.

“So for lack of a better term, I won by default,” said Demanss. “Not how I wanted it to go, but I still think I did OK for only having five passes on the bike ever. Literally, one bad pass at home and made one bad pass in Gainesville.

“Then just by dumb luck, Pat, Crystal and Richard parked next to me. Richard and Pat offered to take a look at my map in my MaxxECU Richard came over, made a couple changes, and next pass I was running nines. Truly thankful for all their help.

“That’s the awesome part about racing—meeting good people that you wouldn’t normally meet in your day to day life. To repay the favor for them helping me (or pay it forward), I ended up fixing a starter on another guy’s bike—Tony from Pennsylvania. He was going to pack it up and drive home. However, we fixed it and he was able to make it go a couple rounds. And randomly, I worked on another guy’s airshifter that had no idea how to hook it up. Did it in 20 minutes—happiest guy think I ever met.

DeManss was also going fast in 10.90 and Eliminator on his V-Rod

“I would like to thank Richard Gadson, and Pat and Crystal Lynch from 187 Custom Cycles for their help all weekend tuning the bike; Mike Beland at A1 Cycles for helping me get the bike running and supplying me with top-of-the-line parts; and my girlfriend Kerry Lee for supporting me and putting up with the madness we call racing.” 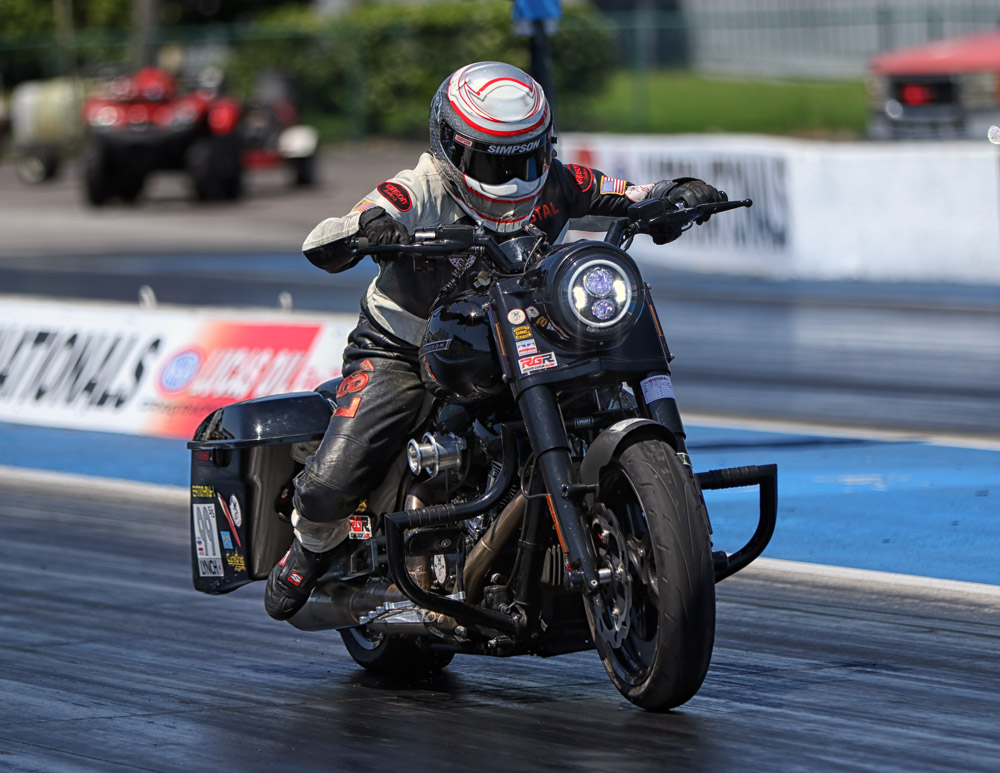 That same Crystal Lynch also took out Florida Harley sportsman drag racing legend and multi-time champ Donnie Huffman in round 1 of Vreeland’s Harley-Davidson Super Gas 9.90, despite Huffman having qualified number one. That was as far as the class got before the weepers wrapped it up.

Another Florida homeboy, Gary Degrange, qualified number one in Top Eliminator 9.30 index, then put nearly a tenth at the tree on fellow Floridian Michael McManus to easily advance out of round one before the day ended.

Degrange again mastered the index at a full second slower in Super Pro 10.30, and again made it past first round.

The crafty Degrange was also still alive in Pingel Modified, where he qualified number two and was slated to face number one qualifier Kimberly DeShields—who was spot-on ready with lane choice and an .018 light in the semi.

Super Stock Bagger runner-up Ragan also qualified number one in Universal Fleet & Tire 10.90, but got beat by Crosby Blair in the first round.

Eliminator and Daryl Coffin Motorsports also got one round in before the end of the day.

A memorial celebration of the life of DJ was held at the track, complete with a BBQ sponsored by Johnny Mancuso and Mancuso H-D, and live music by the Local Traffic Band. The rowdy Nitro Santa would not have wished for weepers either for himself or in the track.

Bill Rowe and his family will persevere and move on to the next event—the sportsman-only AHDRA Shoot-Out at Rockingham Dragway on June 18, followed by a full national event at Milan Dragway on July 29-31.