When Royce Freeman Sr. passed away earlier this summer, the entire drag racing community mourned. It took our breath away. He was well-known and well-liked. His legacy will loom larger than life for generations to come.

It seems impossible to put into words how much he meant to everyone who knew him, or even knew of him. Therefore, this is a bit of a fool’s task. And this fool is honored to have been asked to complete it. Even though I know that nothing I say will be able to properly encompass just how loved, respected, and cherished Royce Freeman Sr. was in the world of drag racing.

He had a smile that could charm the socks off of anyone. As cliche as it sounds, he really did have a boyish grin. There was always a little glint of mischief in his eyes, and so much love. 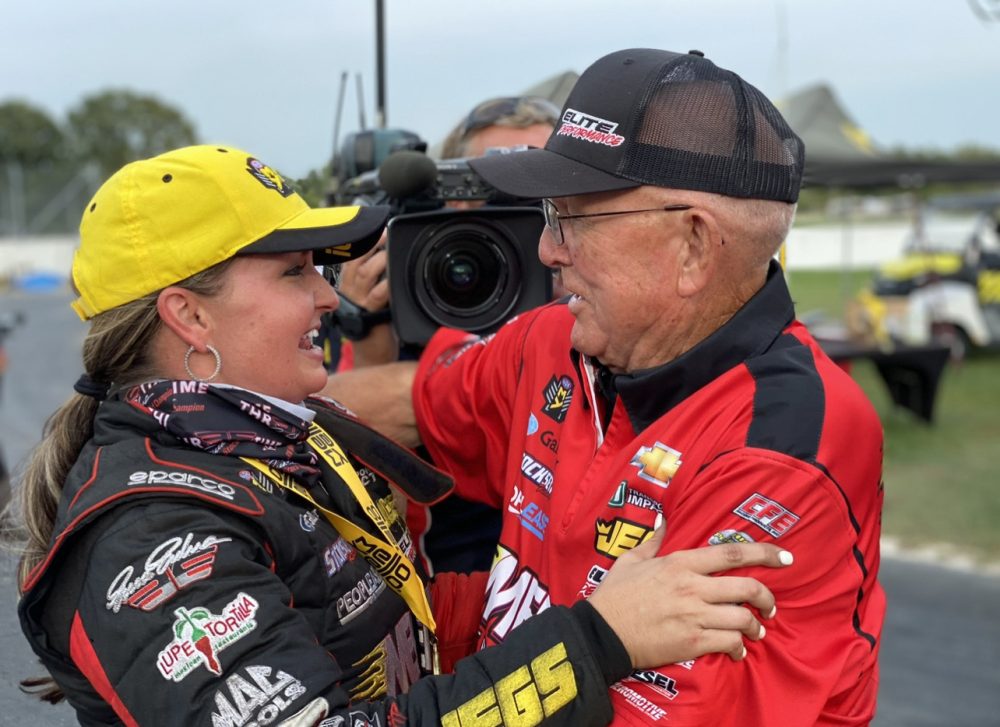 I probably didn’t know Royce all that well, but I felt like I did. Our families had been friends for years and his reputation preceded him. But it was more than that…

I felt a kind of kinship with Royce right away. For one thing, he’s one of those guys who you just know, immediately, is a really good guy – a little feisty, for sure. But a good guy. He made me feel appreciated and special; like he was more excited about seeing me than anything else going on at whatever race was happening. That was just his way. He made everyone feel like they were his best friends. He was delighted to see anyone and everyone at the races.

Royce could talk to anyone, about anything. If you asked him a simple question, you might just get a response that included three anecdotes and at least two topic changes. And it would be fascinating, and entertaining, and you would walk away having had a better day after getting to say hello to Mr. Freeman.

Most of us involved in drag racing refer to it as a big, somewhat dysfunctional, always-loving family. Royce lived his life believing that and it showed in everything he did. It was always about family first.

After graduating high school in 1955, he went to college and joined the Air Force (then later the Air National Guard). He met the love of his life, Sharon, while he was stationed in Waco, Texas. They were by each other’s side from that day forward – over 60 years. After he was out of the service, he and Sharon returned to his hometown of Lindsey, Oklahoma, to work for his father, who owned a Chevrolet dealership. He worked in the car business throughout his life.

When he retired, he joined his sons, Richard, Robert, and Royce Lee, in their business ventures including the eventual formation of Elite Motorsports. Family was everything to him. Perhaps that’s why he made so many of us feel like we were a part of his.

NHRA announcer and the host of the WFO Show, Joe Castello, said at a race not long after Royce’s passing, “That man was pure gold. He was just a great person – no enemies. He was well-loved by people across teams and categories.”

Royce loved drag racing, and clearly, the feeling was mutual. He started racing in the 1960s, getting in on the ground floor of Pro Stock racing. That was the start of a family legacy within the sport. His sons all shared his passion and it wasn’t long before they were all competing. They had a lot of success. They won a multitude of races and Robert won the Division 4 championship multiple times. Royce was there to celebrate all of that success. He loved it. Any day at the races was a great day, from his perspective.

Around the turn of the century, Richard began Elite Motorsports and it wasn’t long after that the Freeman family decided to get back into the Pro Stock ranks. It wasn’t easy, but Royce raised his sons to share his “never quit” attitude. He laid that foundation in his family, often giving his boys opportunities to succeed, but only if they put in the work. He wasn’t afraid to speak his mind and while he loved his family fiercely, he was never shy about putting them in their place when need be.

Richard credits many of the strong relationships they have in the racing community today to his father, either directly or indirectly. As it turns out, being everybody’s friend is good for business. And Royce was everybody’s friend.

The foundation that he began turned into a longstanding legacy that will be remembered throughout the years. He played a major role in the drag racing community, and his contributions are forever woven into the beautiful tapestry of drag racing history.