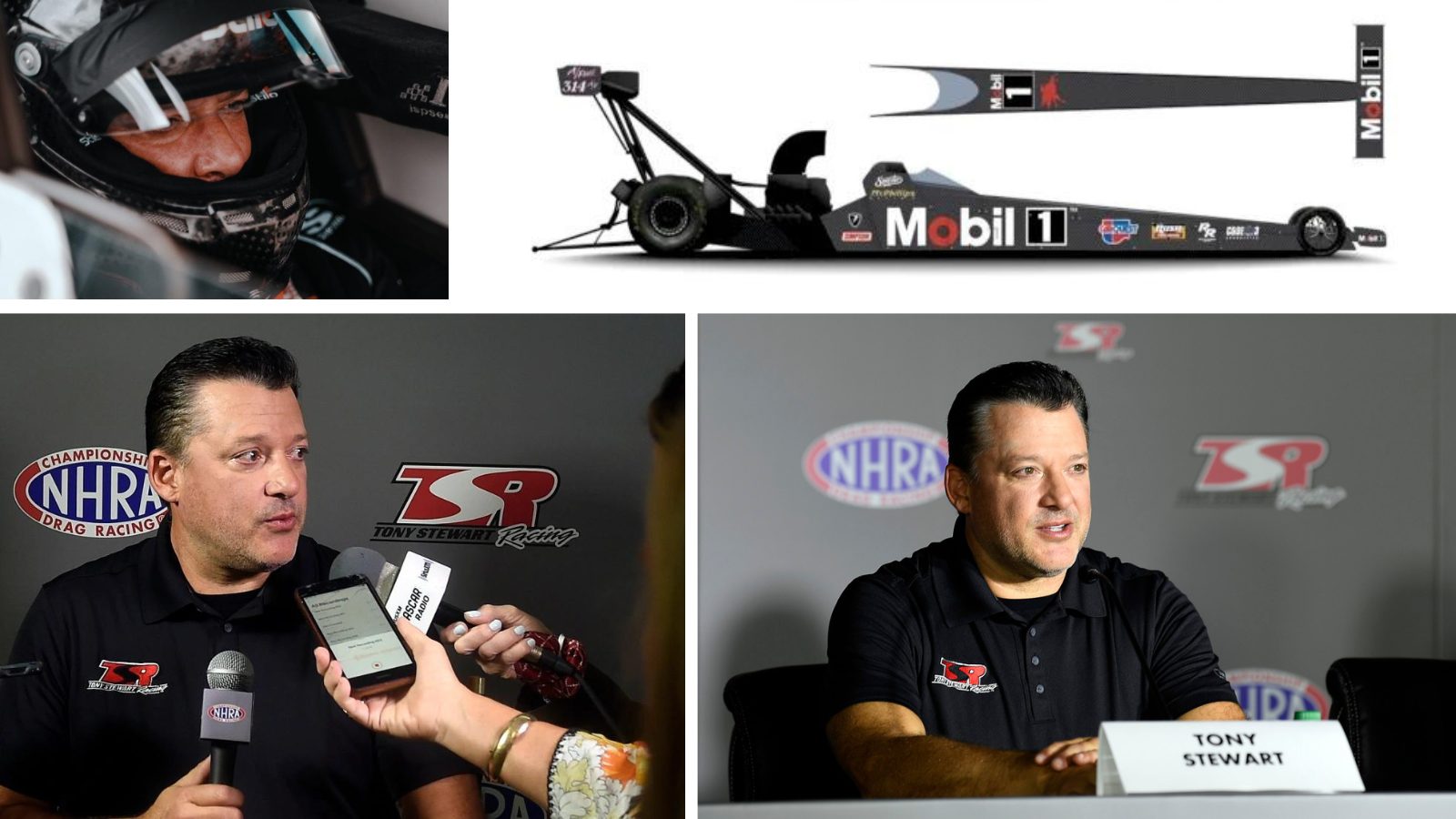 Tony Stewart is ready to run. Ready to run in Top Alcohol Dragster, that is. He’s been testing different types of drag racing cars – first learning to crawl and then walk. Now he’s taking on the NHRA Nevada Nationals in a nitro-injected Top Alcohol Dragster crewed by the McPhillips family.

Stewart has an extensive racing resume – from NASCAR to INDYCAR, IMSA to USAC, and more; the list proves that he was born a racer. The Indiana native confirmed his love for motorsports and passion for speed. “I think if you followed my career, I don’t have a history of being a very good spectator,” Stewart said. “I always watch and get that urge to want to know what it feels like in the driver’s seat.” 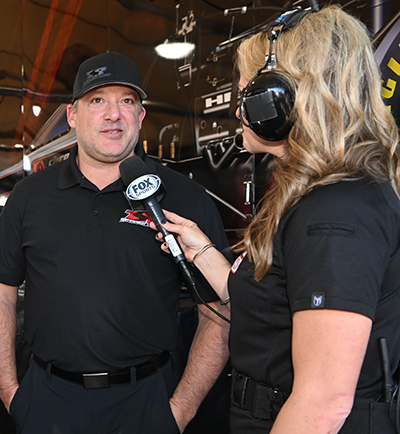 His journey in the NHRA started with his now-wife, Top Fuel Dragster pilot Leah Pruett. Stewart began attending the races, which sparked a curiosity in drag racing. That then led to attending Frank Hawley’s Drag Racing School, where he first tested a Super Comp Dragster and then a blown Top Alcohol Dragster. Stewart has even dipped his toe in the Top Fuel Dragster waters.

Friday morning in Las Vegas will be the first time Stewart races side by side with another competitor. He is confident with the staging procedure, but when it comes to his reaction time, he’s taking advice from his wife. “She goes, ‘don’t get yourself out of rhythm and out of sync from what you’re used to,’” he said.

Stewart will be using the NHRA Nevada Nationals as a test to see if he likes competing in drag racing and to feel out what the future might hold. He’s also cautiously optimistic and stated that he will take it one round at a time as he has his own expectations.

“This weekend is about gaining experience and having my teammates around to help out and ask questions,” said Stewart. “I think it will be very comforting, and it will be an advantage for me to help close the gap with the veterans.

“There are no layups in the NHRA in any of the classes. This is a class that’s very competitive,” Stewart stated.

He’s very aware of the drivers in the competitive NHRA Lucas Oil Top Alcohol Dragster class. However, Stewart is staying focused and sticking to what he’s learned. “This is one of those sports, though, that I feel like the driver still has control of his own destiny to a certain extent,” he explained. “When it comes to the staging, and when it comes to doing what I need to do as far as my job this weekend, it doesn’t matter what they do in the other lane. When that light changes, it’s my job to have a good reaction time to keep it in the groove and do the procedure the way that I’ve been taught and know how to do it to this point.”

When making his debut in yet another type of motorsport, Stewart is ready to experience his first time competing in drag racing. “It’s another example of the first time I’ve ever driven a new car in a new series – there’s that learning curve,” confessed Stewart. “Some things are similar, and some things are different. NHRA drag racing is so different and drastically different than anything I’ve ever done.

“I’m probably at a bigger disadvantage this weekend than I’ve ever been getting into a new car, but the great thing is I’m going with a great team this weekend. The McPhillips family and their team – I have had the opportunity to test and practice with those guys, and they’re a great family.”

Additionally, Stewart admitted he gets a bit nervous before hitting the starting line. “They help calm me down. I get really nervous before I go up, and they look at you and make you just kind of calm down,” he said. “The pressure is not wanting to disappoint them or let them down this weekend by not advancing as far as they’re used to.” 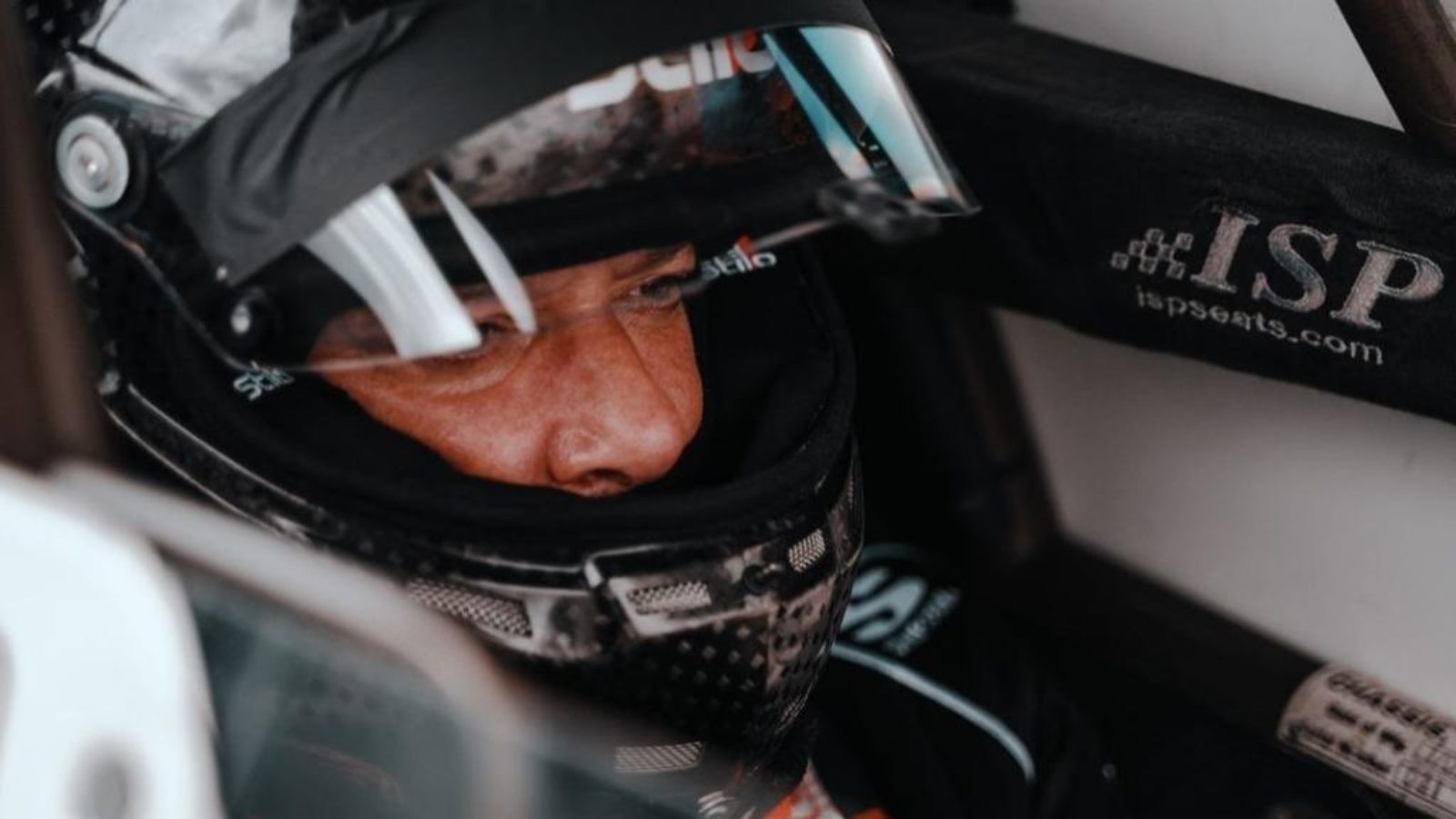 Is three-time NASCAR champion, Top Fuel and Funny Car team owner prepared to make his debut? He answered, “absolutely not,” with a chuckle. “But if you’d asked about any other car I’ve ever driven for the first time, I would say exactly the same thing in all honesty.”

He has an idea of what to expect this weekend but is looking forward to gaining race day experience. Stewart feels honored and genuinely excited to take the tree in a Top Alcohol Dragster while flying his long-time sponsor, Mobil 1’s colors. This could be the beginning of the 51-year-old’s career in drag racing.

“That’s what this weekend is about,” Stewart explained. “It’s about learning and getting that experience and seeing if I think this is something that could be a part of my future.

“It’s a lot of fun to do something different and to see an atmosphere that really reminds me of what it was like in the heyday of having fun in motorsports.”