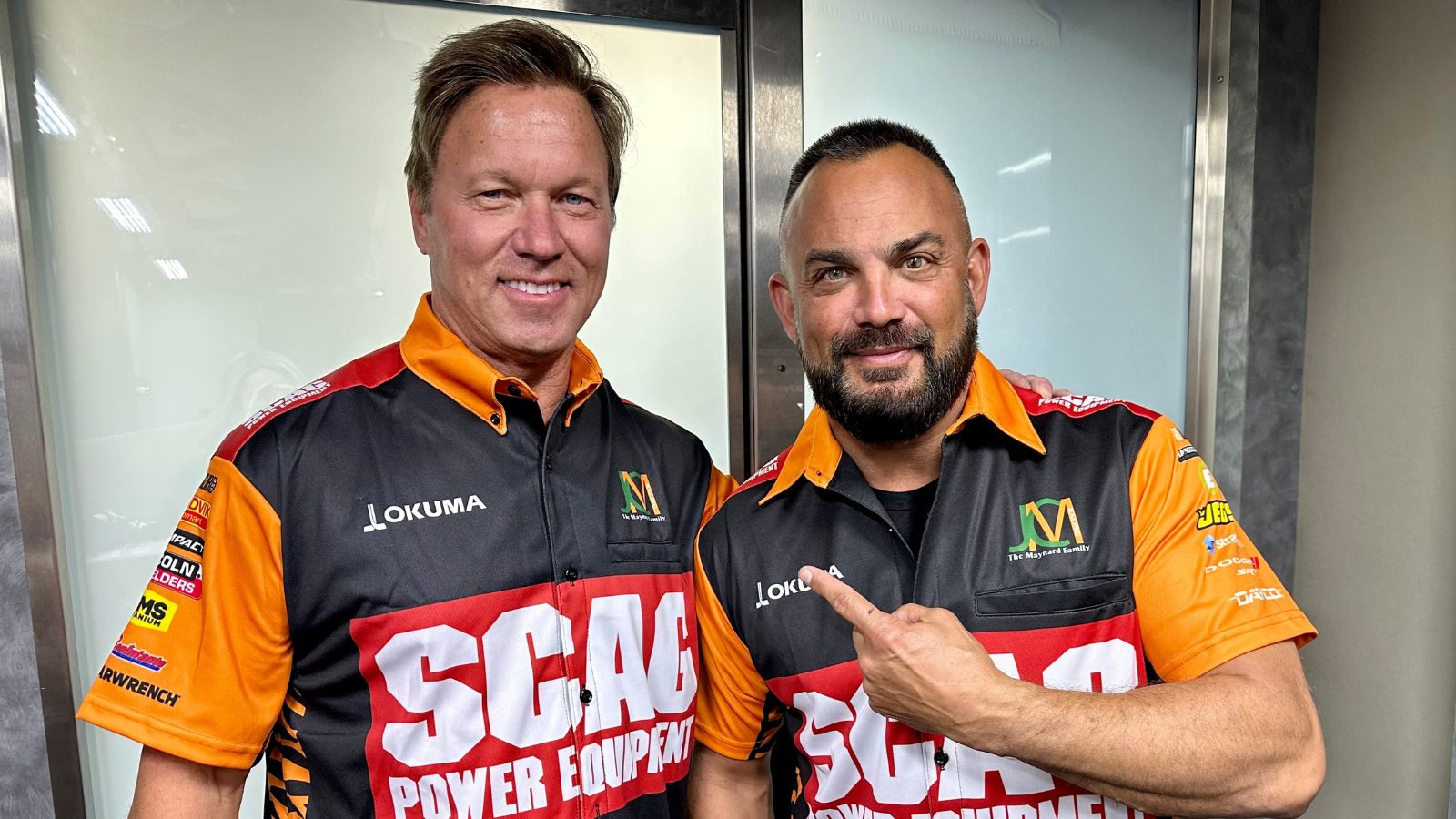 Tony Schumacher and crew chief Mike ‘Zippy’ Neff have reunited, it was announced today, setting up what is certain to be a dominant force in NHRA Top Fuel competition in 2023. The rumors had been swirling throughout the race pits all weekend during the NHRA Finals in Pomona, Calif., and on the first day of the 2022 – 2023 NHRA Camping World Series off-season, the Maynard Family Racing (JCM) team is pleased to confirm the news.

“Yes, it’s official. Zippy will be the crew chief on our SCAG Power Equipment Top Fuel dragster next season,” said Schumacher. “Truthfully, this is a huge deal, and I have no doubt we’re going to be a powerhouse team.”

Neff joins Schumacher after tuning Funny Car driver Bob Tasca to six of Tasca’s 12 total wins over a two-year period. Joining Neff in his new role is Jon Schaffer, who served as Neff’s assistant crew chief on Tasca’s machine. Phil Shuler, a member of Schumacher’s current brain trust, will remain onboard and continue to lend his expertise. Todd Okuhara will leave his current role as crew chief on Schumacher’s car.

Schumacher and Neff have worked together once before with Neff serving as the crew chief on Schumacher’s 2018 U.S. Army dragster before the Army redirected its marketing dollars away from motorsports, which led to the dissolution of the team at the end of the season. In their first and only year working together as driver and crew chief, Schumacher and Neff advanced to six final rounds, including their Bristol, Tenn. victory, and clinched three No. 1 qualifier awards. Feeling like they have some unfinished business, the duo are looking to pick up where they left off in 2018.

“We only got one year together,” Schumacher explained. “Ever since then, my intentions have been to team back up, and win a championship together. He’s wanted to win a Top Fuel championship and we finished No. 2 in the points that year behind Steve Torrence, who was dominant all season. When the opportunity presented itself for Zippy to come over here next year, to me, it was a no-brainer. I wanted to work with him again. I love his enthusiasm, I love his calm approach, he’s got a little bit of that cockiness, and he’s just a cool cat to work with.

“We were running low E.T. on a regular basis, we won a race, and we were getting better every day. We were a team that everyone knew was going to be awesome that next year, and we just ran out of time. Now our time is back. It took a little while to get moving, but once we got into our rhythm, we were kicking butt. We were trucking along in the right direction, and felt like it had all just started to come together.”

Neff brings a proven track record and a wealth of knowledge to the SCAG Power Equipment Top Fuel team. Neff, who has experience inside the cockpit as well as out, having earned 10 race wins as a driver, first started in a crew chief role in 2002. As a tuner, he’s earned numerous race wins and two Funny Car championships, and has worked with high-profile drivers such as John Force, Robert Hight, and Gary Scelzi. Schumacher, of course, is no slouch either, having won eight world championships and 86 national event triumphs, making him the winningest Top Fuel driver in NHRA history.

Like Schumacher, Neff is thrilled to have the opportunity to reprise their driver/crew chief dynamic, while he also welcomes the chance to have a shot at winning a Top Fuel title.

“I’m excited to go back Top Fuel racing with Tony,” Neff said. “That was the only year that I’ve been a Top Fuel crew chief and we finished second that year. We were on track to do big things, and I was bummed when it went away. When the opportunity came around to have another crack at it and team up with a championship driver like Tony, I couldn’t pass it up. Certainly, there will be a learning curve at first, but I don’t think it will take too long for us to be a legitimate contender, and ultimately, race for the championship.”

The SCAG Power Equipment Top Fuel team will kick-off their 2023 campaign when the NHRA Camping World Series commences with the NHRA Gatornationals in Gainesville, Fla., March 10-12. Schumacher will be competing for his ninth Top Fuel world championship, Don Schumacher Racing’s 20th series title, and the first for team owners Joe and Cathi Maynard.