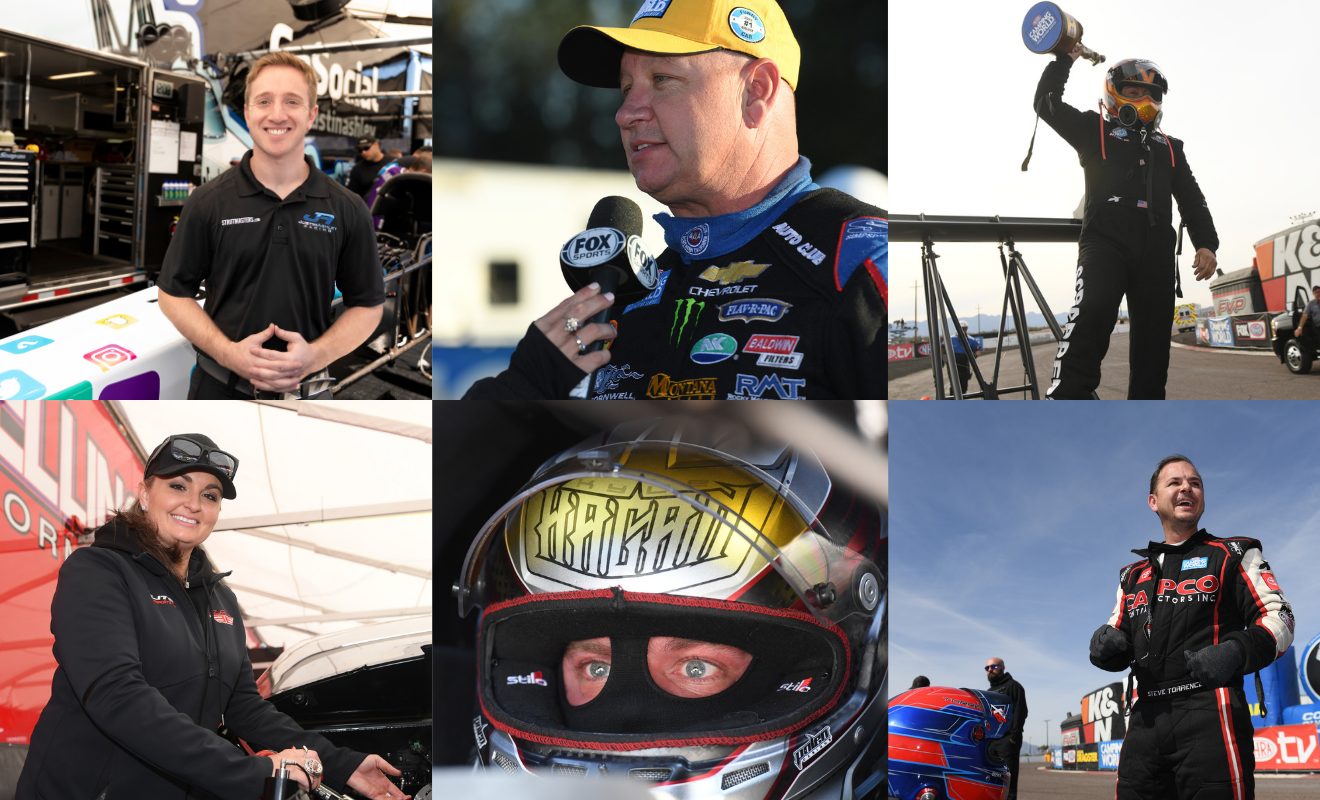 Just three races into the NHRA Camping World Drag Racing Series season, admittedly, we only know so much. That’s not to say, however, that there aren’t some clear storylines developing leading into one of the landmark happenings on the NHRA schedule – this weekend’s Four-Wide Nationals in Las Vegas.

So, with 19 races left to go (a conversation for another day), we poured over notes, race results and rang a few phones to see what kind of picture we could paint. Here’s a look at our early season pro team evaluations… 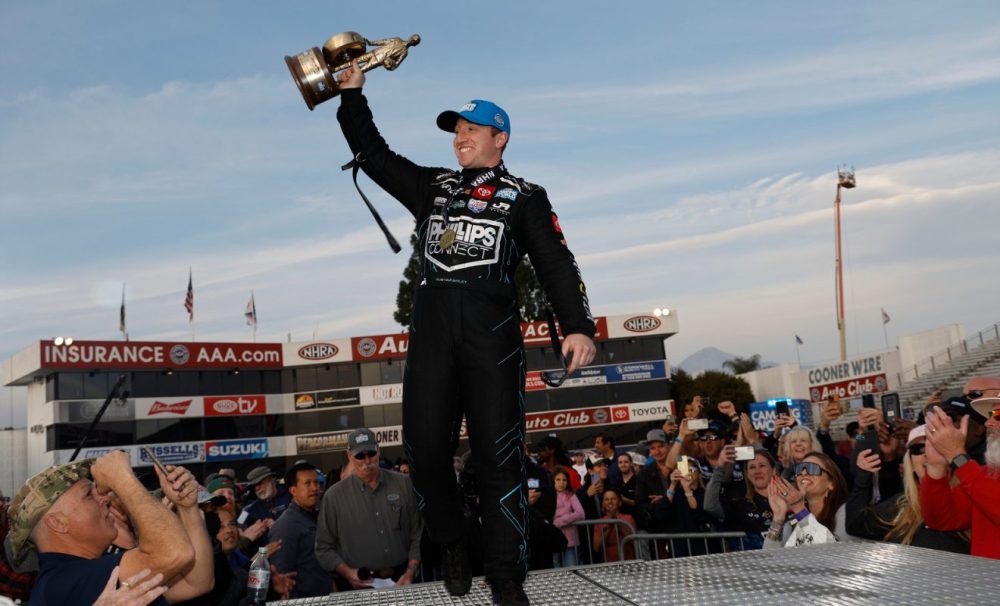 Justin Ashley – He’s come out of the gate fast – no doubt about it. Between Justin’s ability behind the wheel and on the starting line and the tuning chops of Mike Green, this is a legit championship-contending team. Plus, they locked up a sponsorship extension with Phillips Connect that will see the team rock the brands livery for the remainder of 2022. 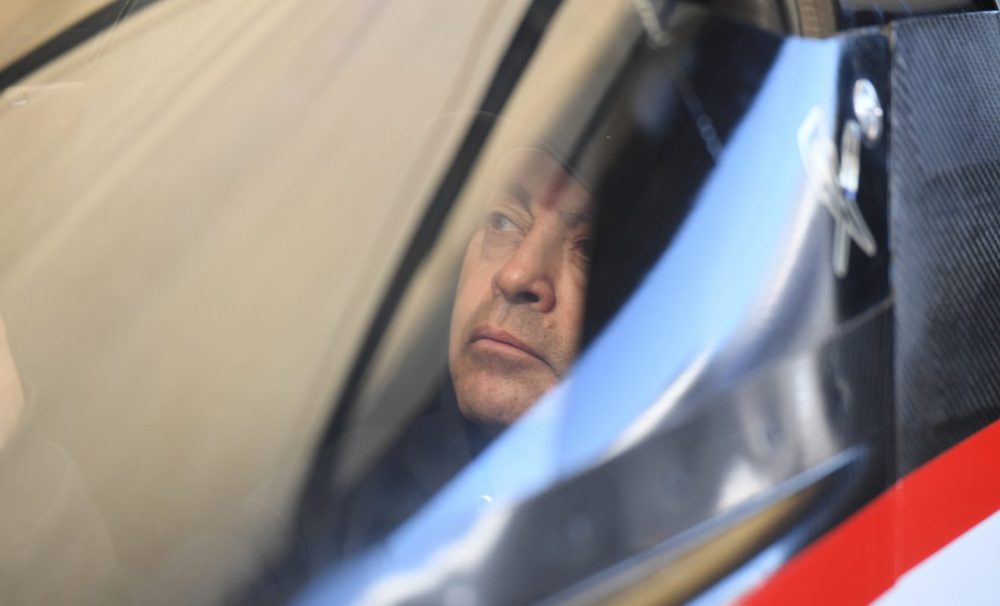 Mike Salinas – Drag racing’s foremost scrapper has to be mentioned. Continuing to run as well as he has early in 2022 despite the departure of Alan Johnson (who joined the Kalitta Motorsports operation over the offseason) says a lot about this group’s dogged determination. Bringing in veteran tuner Rob Flynn is clearly working out, especially paired with young gun car chief Arron Cave who’s been with the Scrapper Racing team since they reemerged on the scene a few years ago. Perhaps the most interesting and impressive aspect of this whole situation is that Mike Salinas has turned himself into one of the top leavers in the class, which he credits to reigning NHRA Pro Mod champion Jose Gonzalez and his foray into Pro Mod drag racing. 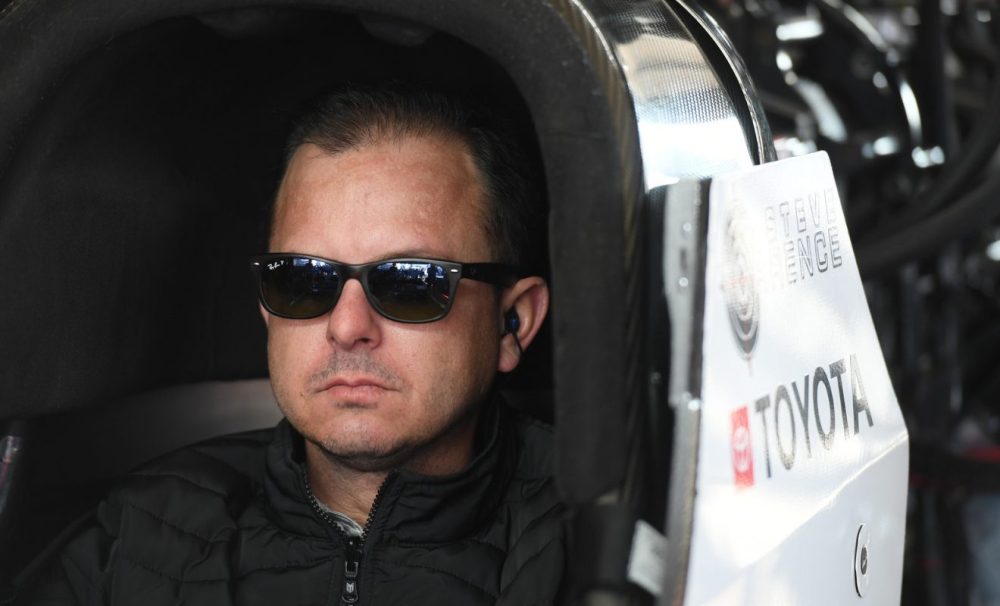 Steve Torrence – Even though he hasn’t won one of the first three races – the first time he hasn’t won over a three-race stretch since 2019 (which is quite literally unbelievable) – guess what? He’s still 3rd in points and a hot rod that is running well. Plus, their satellite car won in Gainesville with Tripp Tatum behind the wheel. He’s going to have to pick it up, but Torrence is still the man to beat in Top Fuel and will be for the foreseeable future. He’s got as much competition for the crown as he’s likely ever had, but we’re confident he’s got what it takes to stay at the top of the heap. 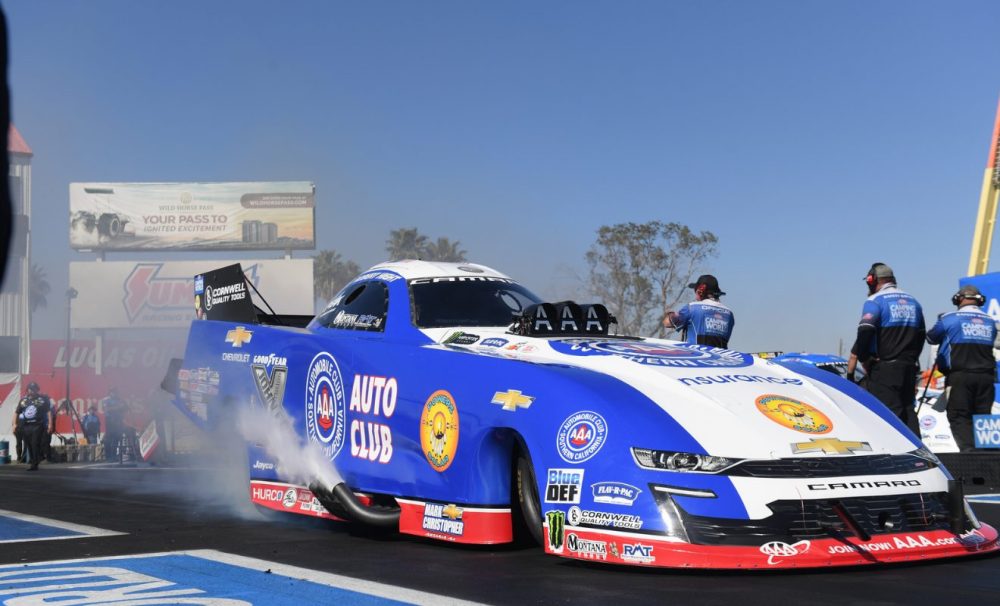 Robert Hight – Robert Hight and the Automobile Club of Southern California Chevrolet Camaro SS team have made 15 of 16 runs in the 3.80s. Yes, you read that correctly. Essentially 94% of their runs so far this season have started with 3.8, and we find that to be massively impressive. Especially when they, well, quite frankly, stunk last year. Since then, they’ve went back to their 2019 tuneup (when they were dominant) and have been crushing it ever since. Don’t put too much stock in their Gainesville showing (they aren’t) because the odd weather had everyone scrambling. The boys in blue are going to be tough to deal with.

Matt Hagan – If you’ve got Dickie Venables and Matt Hagan, the rest seems to take care of itself. Two finals, one win, and a No. 1 qualifier to star the year? Yes, please. Hagan has already secured Tony Stewart Racing’s first professional drag racing win, and the idea that he could potentially win a championship for the recent NASCAR Hall of Fame inductee? Yeah, that’s a needle mover. Plus, we’re sure this is the kind of success that will keep Tony Stewart fired up about drag racing for more than a hot minute (along with being married to a drag racer, of course) and potentially inspire some other high-profile motorsports operators to take a look our sport’s direction. 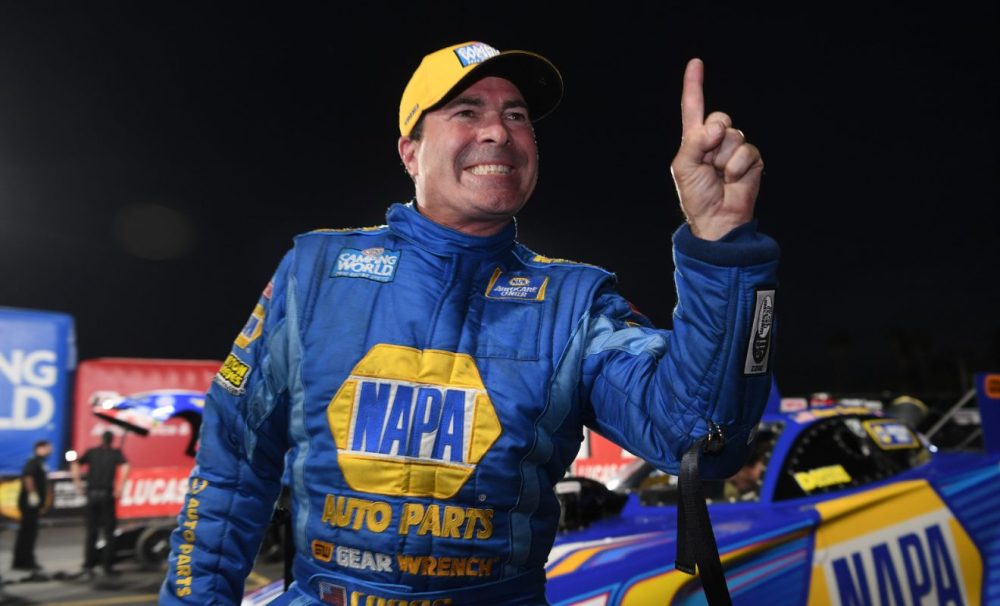 Ron Capps – It felt like the entire drag racing world has been waiting to see how one of our most beloved hired-gun drivers would handle the transition to team owner/driver and…so far, so good it seems for Ron Capps and company. Much like Hagan, Capps’ team remains the same from last year, and he’s cruising right along. We haven’t pried necessarily, but the California-based racer seems very fulfilled having made this step in his career. We’ll attempt to check his temperature later in the season, too. 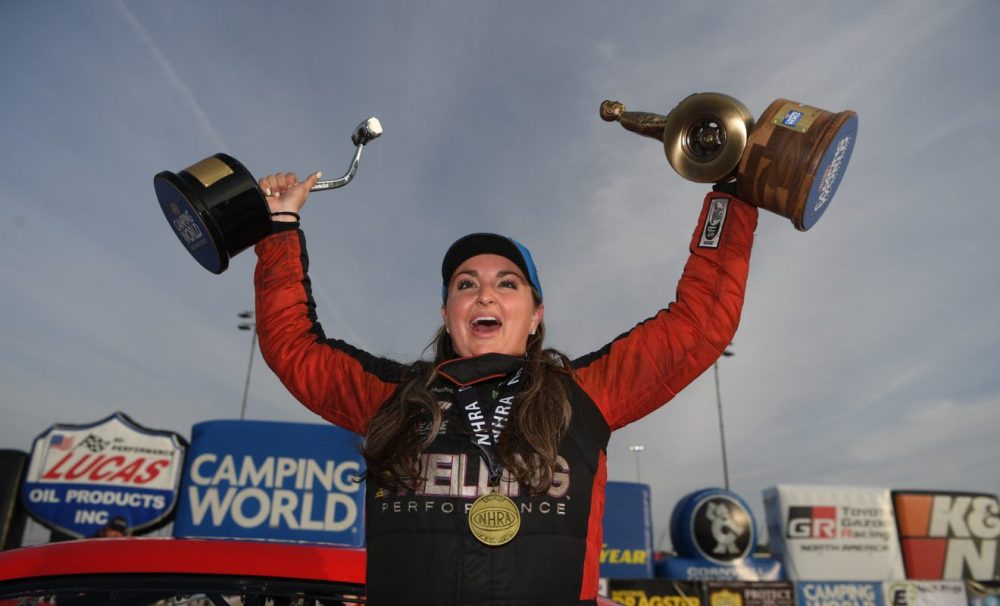 Elite Motorsports – They had to answer the bell after KB Racing’s championship performance last year, and they surely have with all-Elite final rounds at the first two races. Erica Enders and Aaron Stanfield have both been stellar early in 2022, and those moonshot runs in Gainesville were as much of a flex as we’ve seen in Pro Stock drag racing in a long, long time. Sources close to the situation indicate they had more left in those hot rods in Gainesville, and intend to put distance on the field as the season wears on. Also, it’s clear-as-day that Erica Enders is fiercely motivated to try and secure a fifth world title. Side note: Troy Coughlin, Jr. has a brand-new JEGS.com Chevy Camaro from RJ Race Cars that showed serious promise in testing and will be put to work this coming weekend in Las Vegas.

Dallas Glenn – The DRAG ILLUSTRATED Breakout Racer of the Year won in Gainesville and continues to impress in all aspects. Many believed that his Cinderella story season in 2021 would be extremely difficult to replicate, but Glenn has leaned into the challenge and doesn’t appear phased by the attention and expectation that has been thrust onto his shoulders after last year’s stunning season-long run. 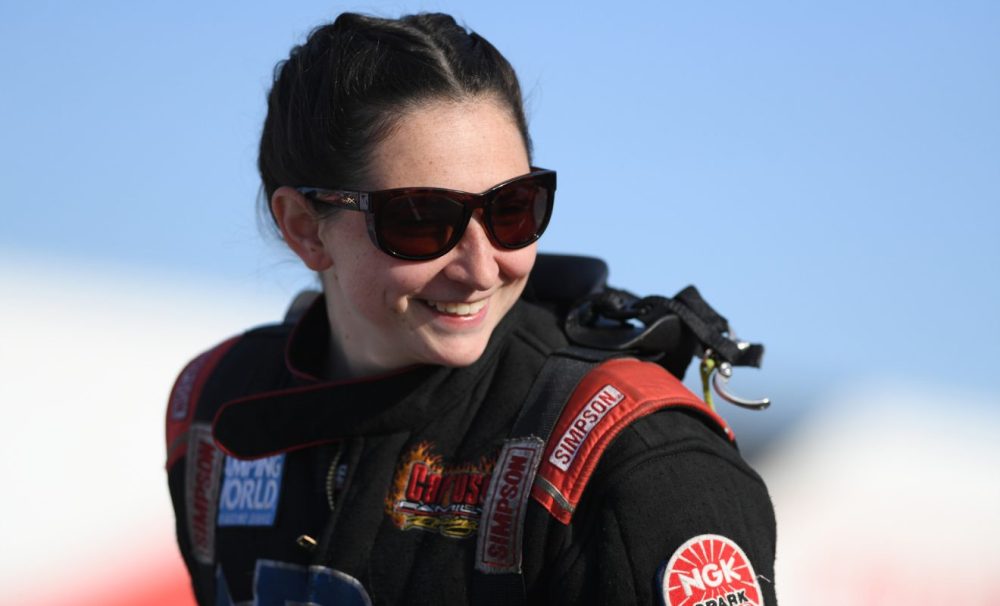 Young Guns – Fresh faces continue to be a major theme in Pro Stock. Mason McGaha has performed really well this year (currently 5th in points), and Camrie Caruso has certainly exceeded all expectations in her Pro Stock debut in her Titan Racing Engines-powered Camaro. We’ve seen her leap over significant hurdles like qualifying and winning a round of eliminations, while also earning top speed of the meet back in Phoenix and making a stout, career-best 6.49-second run in Gainesville.

Kyle Koretsky got the job done for the first time last fall and looks primed to get back into the winner’s circle, too.

With only one race and no qualifying rounds at that – it’s hard to draw any early conclusions in Pro Stock Motorcycle competition. We’ll just say Suzukis are the dominant force in the class now and it’s not close. It was headed that way last year and it’s completely one-sided now. Karen Stoffer crushed the entire field in Gainesville when she made back-to-back runs in the mid 6.60s (the first-ever in the 6.6-second range). Matt Smith will have his ready by Houston/Charlotte, and if you’re not on one this year…you likely don’t have a chance.

Champs Facing Challenges – Obviously, it’s still early, but Tony Schumacher and Antron Brown have both struggled, as have Shawn Langdon and Doug Kalitta (not a champ, but close, and with seriously high expectations after bringing Alan Johnson into the fold). Kalitta has basically made one good run this year (qualifying No. 1 in Phoenix with a career-best pass). With Top Fuel so deep this year, everyone has to get their act together and do it in a hurry – especially with racers like Josh Hart, Tripp Tatum and Doug Foley, amongst others, ready to snag one of those spots in the Top 10. There’s no doubt tensions will be high come Indy. 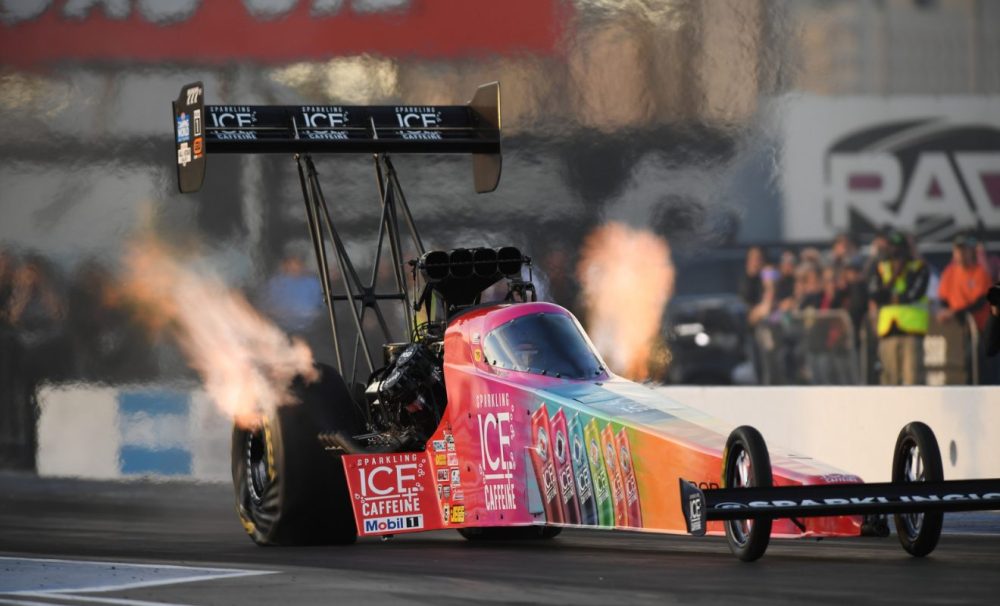 Leah Pruett – We could see a major upheaval here. The team has one round win in the last 7 races. They struggled throughout 2021 and entered this season with big expectations as part of the new Tony Stewart Racing operation. This is a group that quite clearly knows how to win (see Matt Hagan), but may need a shakeup or a fresh perspective to make it happen. We can’t imagine Tony nor Leah are going to be happy with these results for much longer.

Clay Millican – He’s run well, but it would appear there are dominoes falling in that camp. What does this do for the team currently 5th in the championship points standings?

J.R. Todd – His new DHL Toyota Supra has drawn lots of headlines, but the team has struggled to open the year. They only have one elimination round win to their credit thus far and we’re confident they’ll turn things around soon, but with all the hype around the new Supra body…they want results now. It’s going to be important for Todd and team to make a move to get in the mix for the NHRA Funny Car All-Star Callout in Indy. We imagine that’d be a tough pill to swallow for a team that’s accomplished so much.

Paul Lee – The high-level entrepreneur and former Top Alcohol Funny Car racer parted company with Jim Oberhofer after Gainesville, and we’re anxious to see how this will change things for the team. As they so often say, “sometimes you have to take a step back to take a step forward” – and here’s hoping that’s the case for this group. 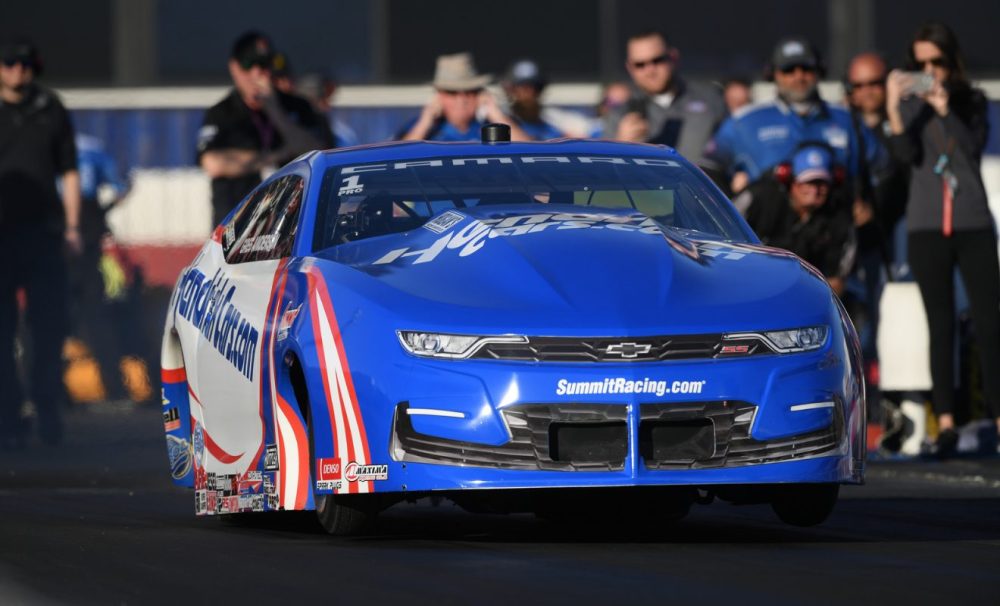 Greg Anderson – No changes coming, but after a great start to last year, the KB Racing team hasn’t done much this season. There’s a lot on the line for Anderson right now as a 6th world championship would move him past Jeg Coughlin, Jr., so we imagine this is a team that’s going to be pushing hard. The man said it himself after Gainesville…they’re going to be a lot more aggressive moving forward in 2022.

Bo Butner – He had a massive holeshot victory against teammate Erica Enders at the Gatornationals, but hasn’t found his stride yet other than yet. With so many young guns in the class, it’s going to be hard to fall behind in Pro Stock this year.

Matt Hartford – The main man at Total Seal Piston Rings is currently 12th in points, and we’re positive he’s not happy with that. Again, with the depth of talent at drag racing’s highest levels there’s bound to be some big names on the outside looking in come Countdown time. Who will it be?