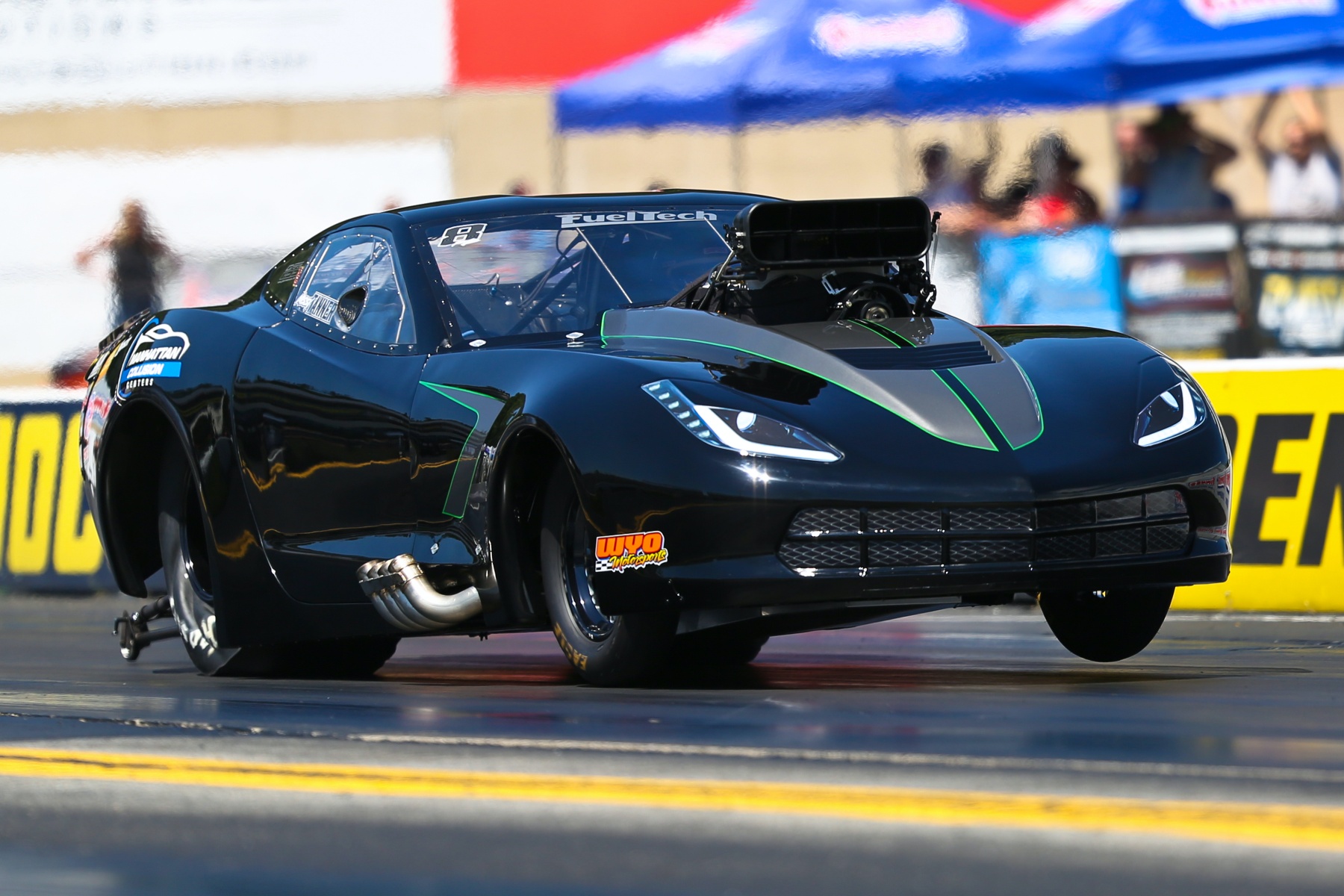 After two qualifying sessions, the other pro No. 1 qualifiers are Jim Halsey in Switzer Dynamics Pro Nitrous, JR Carr in Liberty’s Gears Extreme Pro Stock presented by AED Competition, Walt Lannigan Jr. in $hameless Racing Pro 632, and Nick Agostino in Menscer Motorsports Pro Street presented by AFCO. Ron Rhodes raced to the No. 1 spot in AFCO Super Street presented by Menscer Motorsports for the second consecutive race. The planned third qualifying session for the pro classes was canceled due to time constraints. 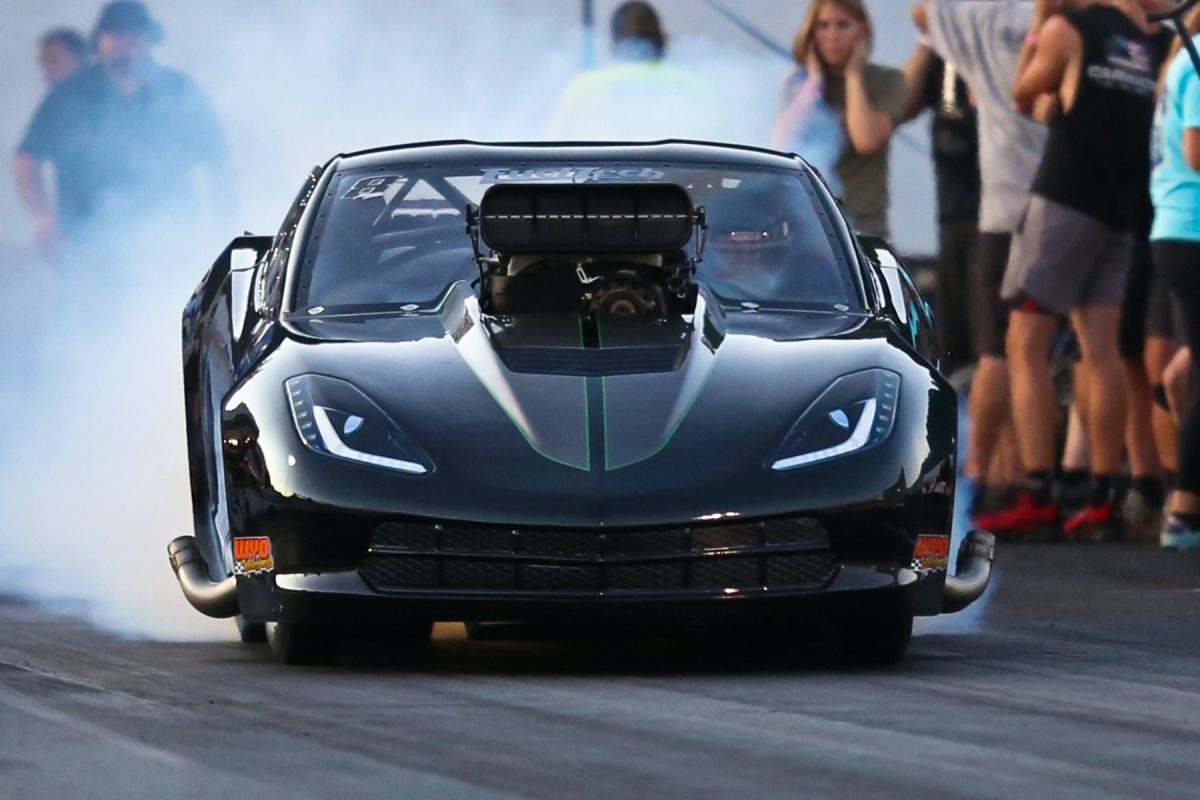 Preston Tanner continues to impress in his sophomore season in Pro Boost, as the 22-year-old driver earned his first No. 1 spot on the strength of a 3.663 at 204.23 in his screw-blown “Sweetheart” ’15 Corvette. The past Pro Jr. Dragster world champion took the top spot by just one thousandth in the final session. Tanner is chasing his first win in the class after reaching the final round at the Doorslammer Derby in Kentucky and the Summit Racing Equipment PDRA ProStars in Virginia just two weeks ago.

“Everybody likes to have a fast car, but to have the fastest car when you go up there, it means something a little extra,” said Tanner, who thanked tuner Jeff Pierce, Todd Tutterow and Brad Schmidt of Wyo Motorsports, M&M Transmission, G-Force Race Cars, Resolution Racing Services, Manhattan Collision Center, Talbert Manufacturing, parents Andy and Missy, sister Lexi, and crew member Chad Crawford. “This just shows that our program is working. We always see other people going out there being the fastest and you’re like, ‘Man, I really have to gun for it.’ Now, we’re in the situation where we just need to go A to B and try to win the race with A-to-B runs.”

Randy Weatherford, who defeated Tanner in the ProStars final round, claimed the No. 2 spot with a 3.664 at 199.55 in his ProCharger-boosted WS Construction ’19 Camaro. Points leader Todd “King Tut” Tutterow in his screw-blown P2 Contracting/FTI Performance ’20 Camaro rounds out the top three with a 3.675 at 206.29. 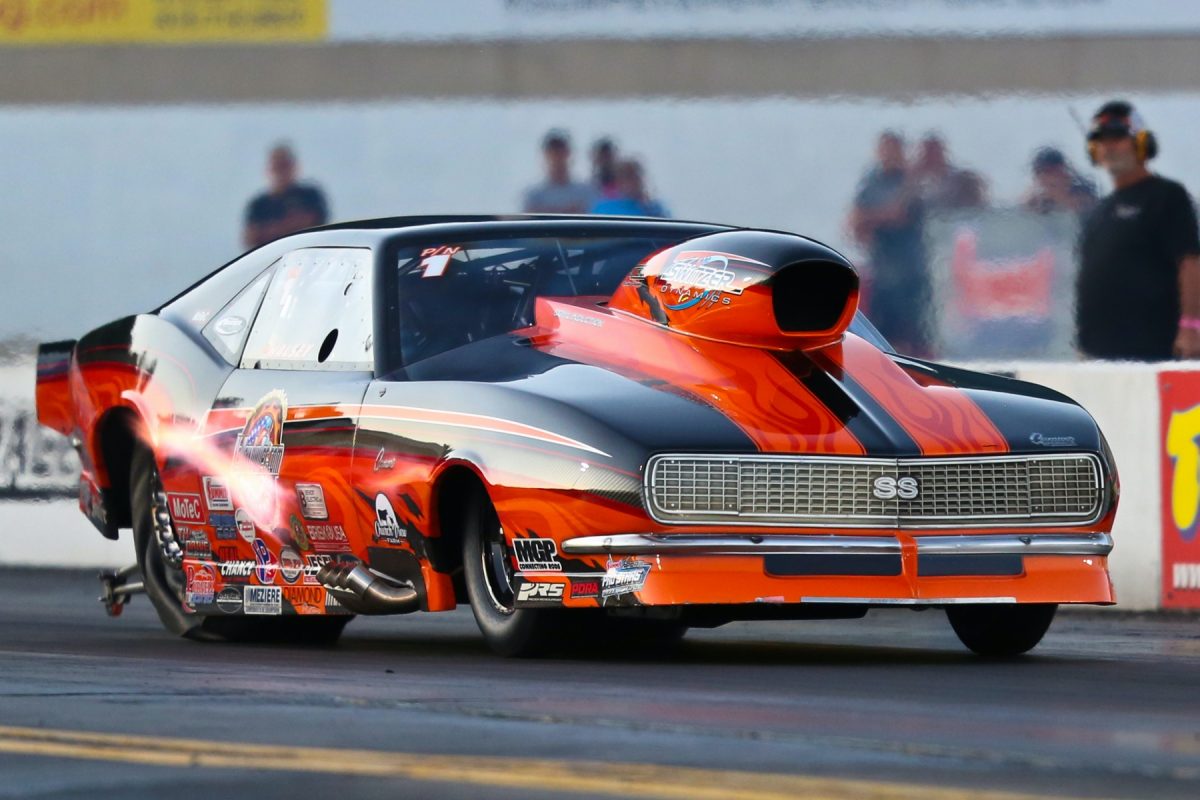 For the second consecutive race and the third time this season, defending world champion Jim Halsey took the No. 1 position in Pro Nitrous. He earned it on speed, posting a 3.732 at 205.10 in his Fulton-powered “Daddy Shark” ’68 Camaro to outrank Chris Rini’s 3.732 at 203.25 in the final session.

“The credit goes to [tuner] Brandon Switzer,” said Halsey, the only three-time world champion in the class. “This is a tuner’s track, for sure. We went down the track this morning. We probably could’ve gone a little faster if we had one more run on the track. We get a single first round since we’re No. 1 qualifier. That will give us one more lap on the track. Hopefully we continue to get a little better.”

Rini, who earned his first Pro Nitrous win at the Summer Shootout a few weeks ago, took Bryant Marriner’s Buck-powered ATI Racing Products ’69 Camaro to the No. 2 spot with his 3.732 pass. Ed Burnley, the runner-up at the 2021 Northern Nationals, qualified third in his Musi-powered “Iron Man” ’69 Camaro with a 3.734 at 201.55. 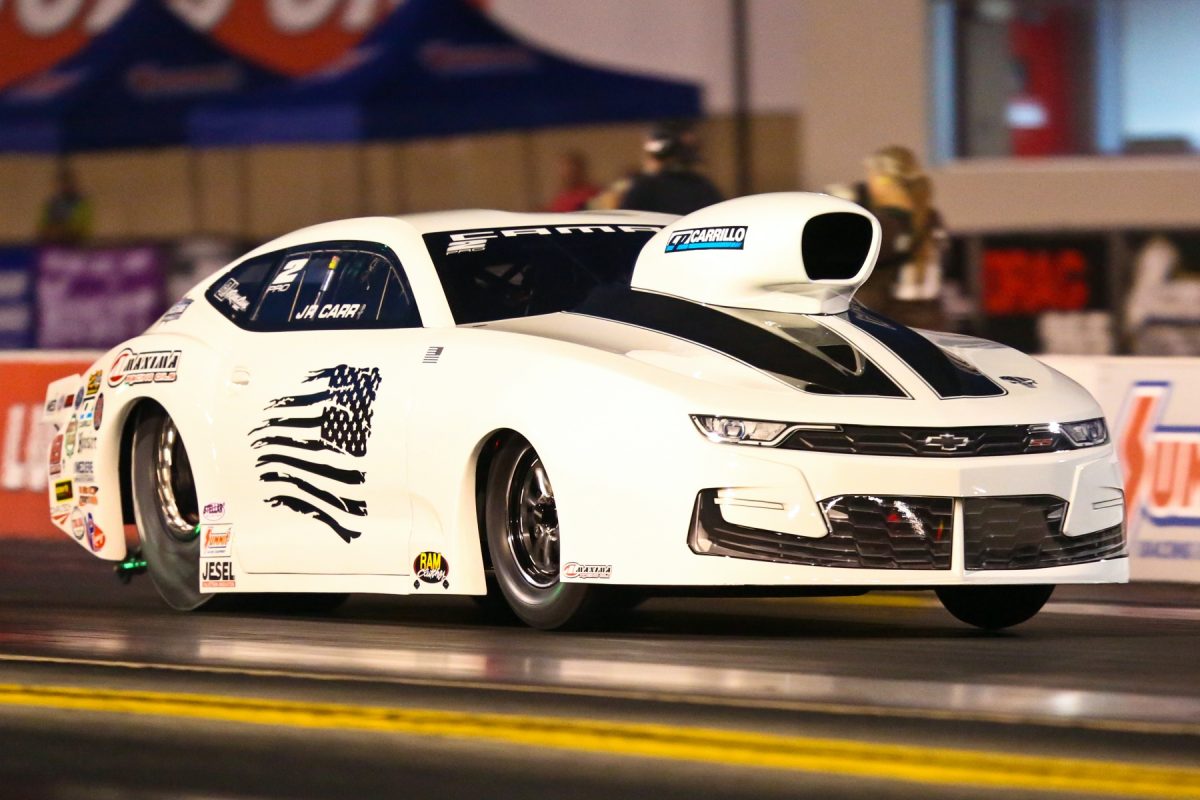 JR Carr, fresh off of a $10,000 Extreme Pro Stock win at the ProStars race, added his fourth No. 1 qualifier award of the season after recording a 4.061 at 178.42 in his Frank Gugliotta-tuned F5 Motorsports ’20 Camaro. The Mountain Motor Pro Stock veteran is seeking his second points-earning win of the season as he chases down points leader Tony Gillig and 2020 world champion Johnny Pluchino in a bid for his first PDRA world championship.

“Being No. 1 is a great confidence booster because it shows you have the car to do it,” said Carr, who thanked his crew, wife Teri, and supporters like CP Carrillo and Maxima Racing Oils. “Now, instead of a burden – you have the fastest car, you have to win everything, then you screw something else up – it just gives me the confidence to get in and drive. Don’t worry about all the things you can’t do anything about. I tell everybody how hard these cars are to drive, but I think it’s because of Frank being so aggressive all the time. Maybe they’re a little easier to drive than I think, but I don’t know any different. He’s always aggressive, and I like it. Always trying to improve.”

Elijah Morton, who qualified No. 1 at the last two races, slid into the No. 2 position with his 4.096 at 176.60 in his Allen-powered Morton Brothers Motorsports ’19 Mustang. Defending world champion and home track star Chris Powers drove his Chuck Samuel-tuned Sonny’s Racing Engines ’21 Camaro to a 4.098 at 175.89 to qualify third. 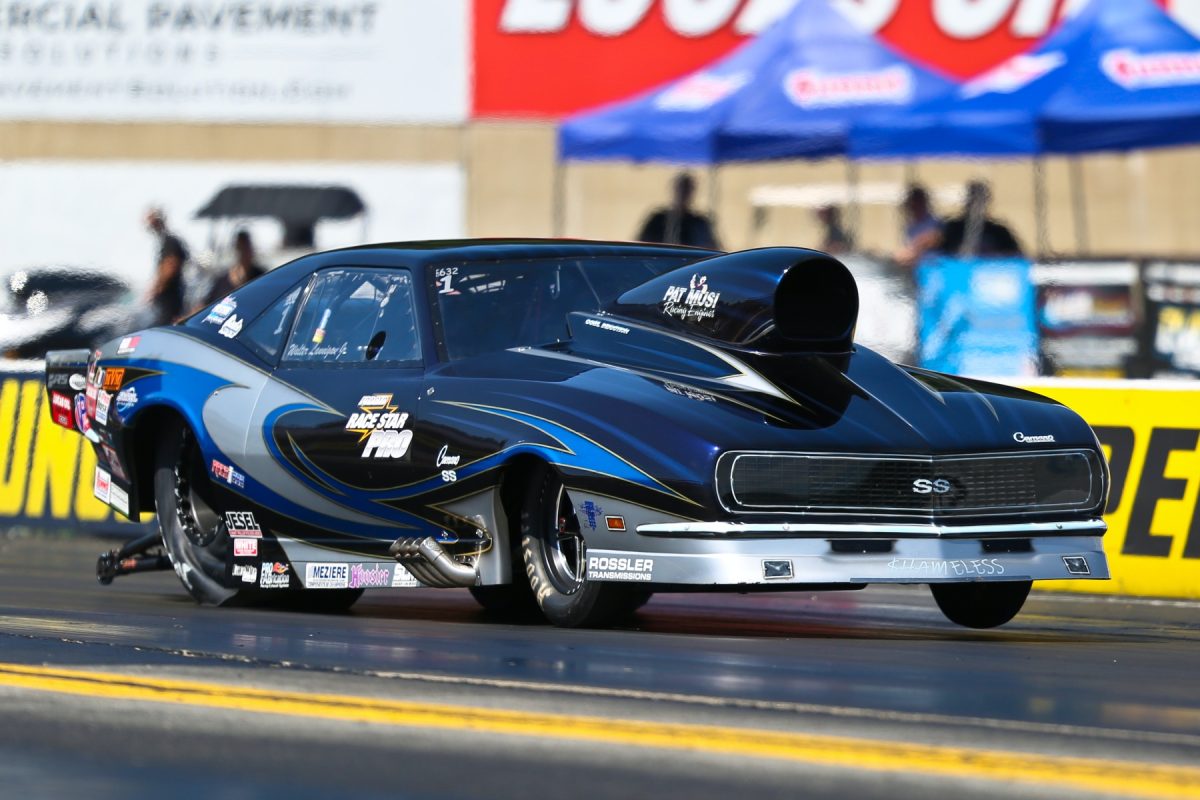 The last pair in Pro 632’s final qualifying session put on a show, as Walter Lannigan Jr. and Daryl Stewart both made 4.189-second passes. Lannigan’s speed of 170.47 in the Troy Russell-tuned, Musi-powered $hameless Racing ’68 Camaro was just a touch faster than Stewart’s 169.08, putting the Pooler, Georgia-based driver in the No. 1 spot for the fourth time this season.

“I kind of needed that,” said Lannigan, who thanked his team, including Dave, Troy, Shawne, Bill, Sergio, Greg, and the rest of the $hameless Racing team. “Sometimes you kind of question yourself, but I knew I could do it, and my guys had faith in me the whole time. My guys worked hard like they do always. This is just the result of it. To me, that was a final round and I approached it as a final round. Daryl and I were joking and had a little wager up in the staging lanes. That was a statement.”

Stewart, who qualified No. 1 and won the last points race on tour, enters race day in the No. 2 spot in his HRE-powered Chassis Engineering ’17 Camaro. One thousandth behind Lannigan and Stewart, rookie Alan Drinkwater fired off a 4.19 at 169.83 in Kenny Floyd’s naturally aspirated, Kaase-powered ’04 Escort to qualify third. 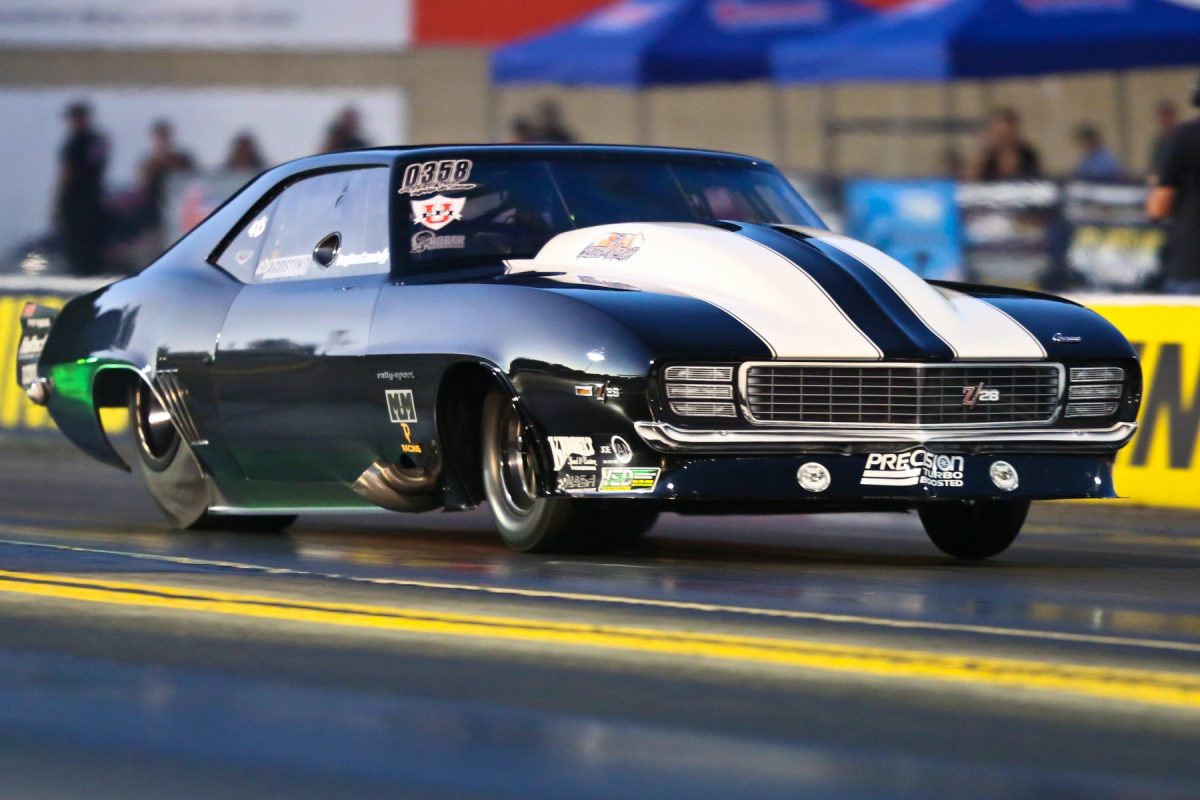 Canada’s Nick Agostino qualified No. 1 for the fourth time in five races after charging to a 4.047 at 203.03 in his turbocharged, small-block-powered “Cannoli Express” ’69 Camaro. It was a reassuring performance for Agostino, who had to make repairs after a massive wheelstand on a winning semifinal pass at the last event. Between testing and qualifying, it took a handful of passes for Agostino and his team to settle back into a sweet spot.

“We tested [Thursday] and we struggled,” said Agostino, who thanked his crew, as well as Mark Menscer of Menscer Motorsports and Mark Micke of M&M Transmission. “We were knocking the tires off at 500 feet. I got a little bit nervous when it did a Top Fuel burnout at 500 feet. The first round, we took some [power] out and the track hadn’t improved like we thought it would. I had to take more out. We slowed things down and the track came around on that last pass. Everything worked out. I thought it would go .02 or .03. We took some boost out of the back just because we were nervous it was going to kick the tires. It worked out good.” 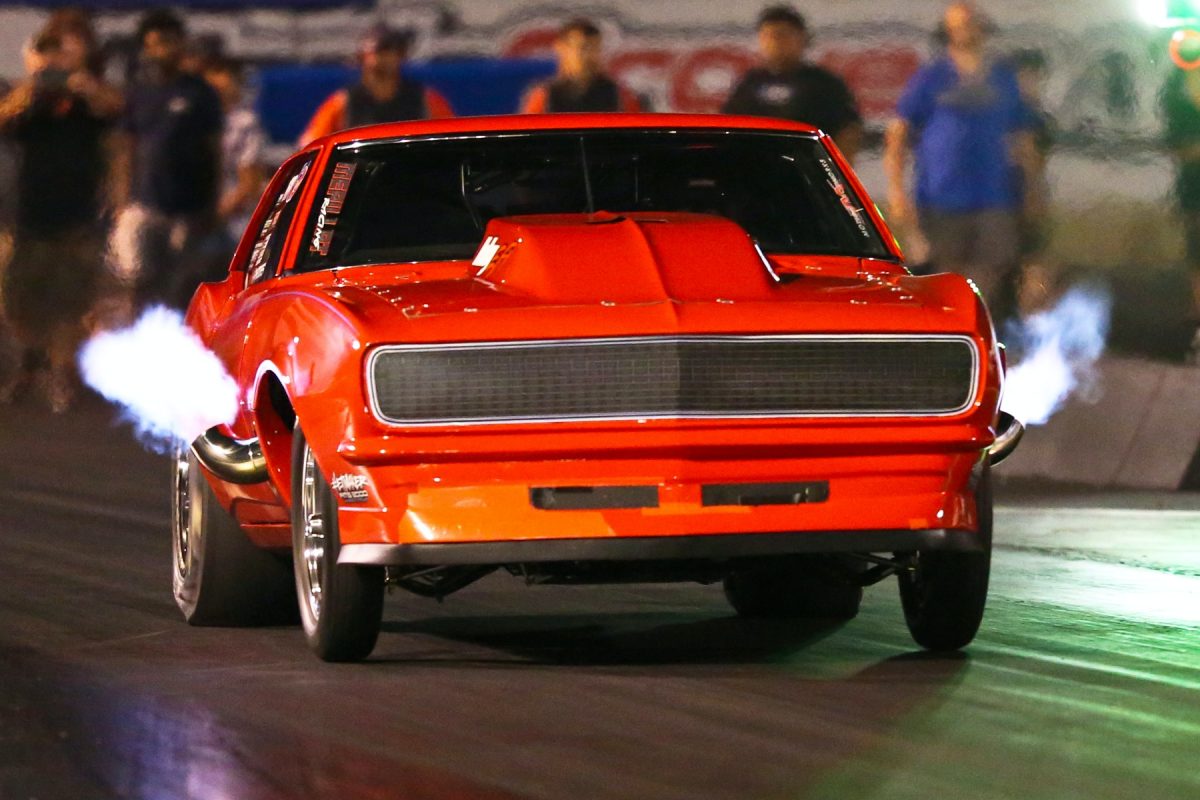 Racing on slicks in the PDRA’s new small-tire class, radial racing veteran Ron Rhodes earned a commanding lead in Super Street qualifying with a 4.685 at 158.95 in his nitrous-assisted, small-block-powered ’68 Camaro. In three races for the class, it’s the second time Rhodes qualified No. 1. Scott Marshall in his nitrous-fed ’90 Mustang ended up second with a 4.803 at 150.15, while Dan Whetstine followed closely in third with a 4.815 at 155.56 in his ProCharger-boosted ’91 Mustang.

Past world champion Buddy Perkinson bounced back from a tricky run in the first session to take the provisional No. 1 spot in Elite Top Sportsman in the second session, driving his Musi-powered LAT Racing Oils ’69 Camaro to a 3.888 at 192.69. Defending world champion Tim Molnar is second with a 3.913 at 194.49 in his nitrous-assisted ’68 Camaro. Henry Underwood in his ProCharged PAR Racing Engines ’63 Corvette posted a 3.915 at 188.96 to sit third going into Saturday’s final qualifying session.

Top Sportsman veteran Mark Payne is the provisional No. 1 qualifier in Top Sportsman 32, just missing the Elite field with a 4.241 at 171.69 in his House of Payne ’06 Cavalier.

Vic Puglia rocketed to the top spot in Elite Top Dragster with his 3.766 at 194.21 in his Tonawanda, New York-based, ProCharger-boosted ’20 Puglia dragster. Reigning world champion Pete Maduri is No. 2 in the Bauer family’s ProCharged Dynabrade ’17 Chrome-Worx dragster with a 3.804 at 193.74. Points leader Larry Roberts is third with a 3.841 at 190.16 in his centrifugally supercharged ’16 Racetech dragster.