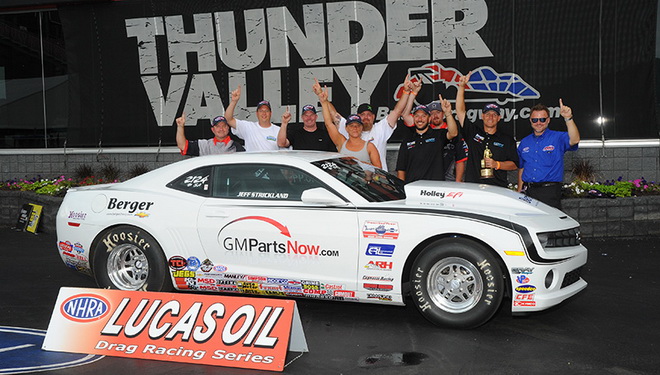 This past weekend was one for the history books for the Mooresville, NC-based Gray Motorsports team. The Pro Stock branch raced to success at the NHRA New England Nationals with a low qualifier award and the trophy, and three-time division champion Jeff Strickland wheeled his way to the winner’s circle at the NHRA Lucas Oil Series Division 2 event at Bristol Dragway.

B/SA Stock Eliminator driver Strickland has an assortment of victories across several sportsman categories, but it was his first trophy earned behind the wheel of the Gray Motorsports GMPartsNow.com COPO Camaro.

“This was my first win in the GMPartsNow.com COPO Camaro, and I have put a lot of pressure on myself to win with this car, so it felt really good to get it done,” said Strickland. “But to be honest with you, even after winning, there won’t be any less pressure. Once you do it, you have a reputation to uphold to everyone else but mostly to yourself – and you just want to do it again.”

Notably and as a true testament to Strickland’s capabilities behind the wheel, for the third time in his career he nearly accomplished something few drivers ever will: pull off the coveted double-up win. The Red Bay, Alabama-based competitor was also runner-up to Robert Houston in Top Dragster at the Bristol event.

Strickland’s win in the GMPartsNow.com COPO Camaro preceded a victory by his Gray Motorsports teammate, Dave Connolly, at the NHRA New England Nationals in the Charter Communications Chevrolet Camaro. After Strickland’s title quest came to fruition on Saturday, he was able to watch on Sunday as Connolly utilized Gray Motorsports power to set low elapsed time in each round of eliminations and compete with teammate and Rookie of the Year contender Jonathan Gray in the final round.

This after teammate Shane Gray raced to the No. 1 position during qualifying, kicking off a perfect weekend for the heavy-hitting team.

Connolly, who also races a second GMPartsNow.com COPO Camaro in Stock Eliminator, was quick to admit that Strickland’s success fueled his fire.

“I think he put the pressure on me,” laughed Connolly. “But seriously, Jeff is obviously very talented, and we knew when we put this program together that he was capable of winning. We have a team camaraderie in the Gray Motorsports camp that makes you step up your game, and that was a key ingredient for me to win this weekend.”

The event in New England was the first all-Gray Motorsports final and the 24th Pro Stock win for Connolly, now a 28-time winner overall with four national event trophies scored as a sportsman competitor.

“We were cheering at home, watching it on ESPN live,” said Strickland. “It was a neat deal for this team, and I was very proud to be part of such a great weekend in Gray Motorsports history. It isn’t something I’ll ever forget, that’s for sure.

“Every win is special, and this one is no different. It means a lot to do this for Gray Motorsports, for Matt Berger and Berger Chevrolet, and for GMPartsNow.com. After we left Atlanta earlier this year, I felt like we had made a lot of headway with the car and with the driver. This is one of the best cars I’ve ever driven, and now we’ve proven that we can get this done.”

Strickland won’t have to wait long for another opportunity to visit the winner’s circle; this coming weekend he will race the GMPartsNow.com COPO Camaro in the Stock Eliminator category at the Route 66 NHRA Nationals at Route 66 Raceway near Chicago and then the Summit Racing Equipment NHRA Nationals in Norwalk, Ohio just one week later.

“I can’t wait for the next one,” said Strickland. “Hopefully, we’ll have two good nationals back-to-back, and if everything falls our way and I do my job, maybe we can get another trophy for Berger Chevy, GMPartsNow.com and Gray Motorsports. That would sure be nice.”