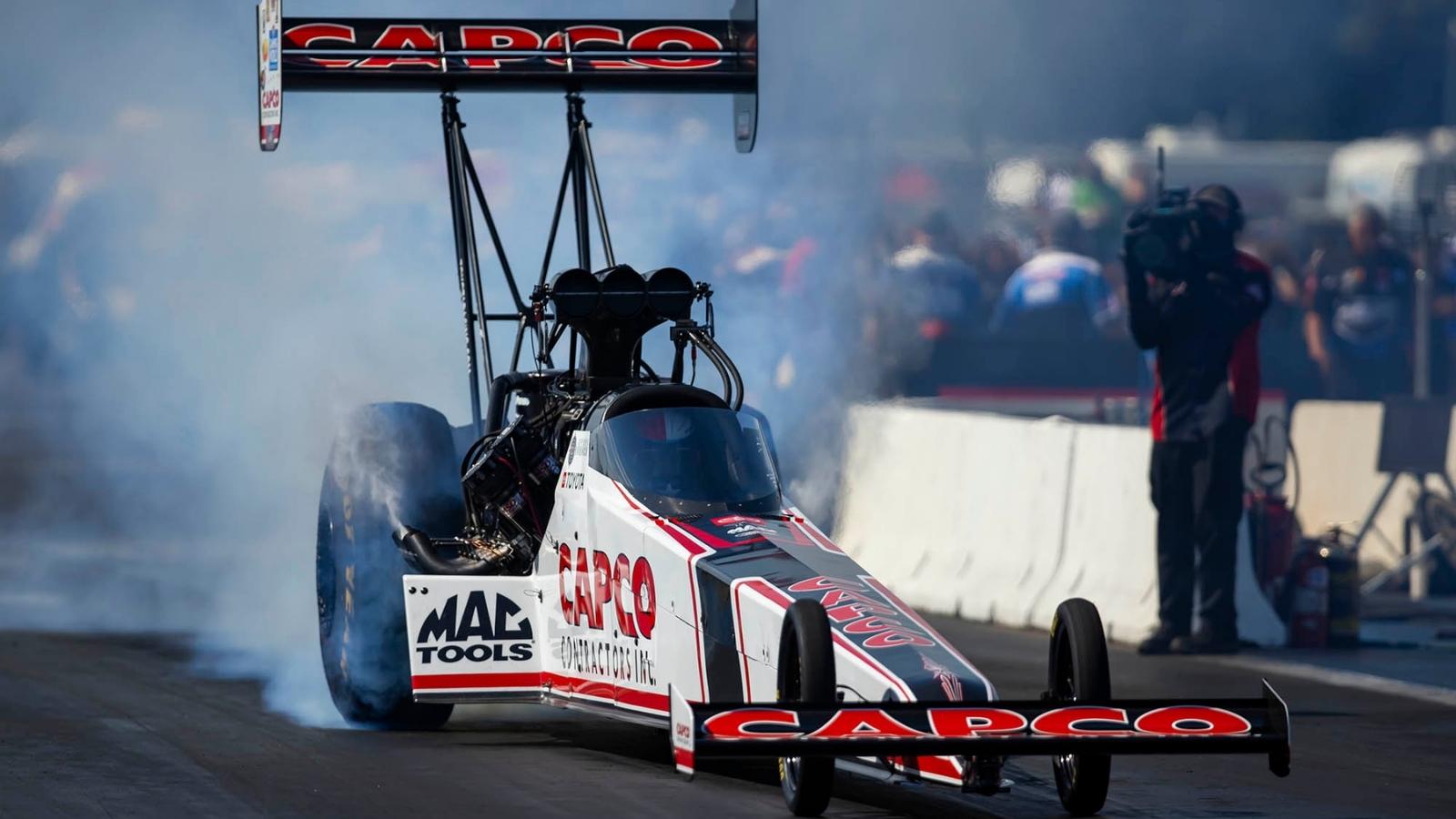 On the eve of this week’s 68th annual U.S. Nationals, with his bid for a fifth straight NHRA Top Fuel championship threatened by current point leader Brittany Force and others, Steve Torrence has derived inspiration from a most unexpected source.

Long-time rival Tony Schumacher’s recent resurgence after several seasons as a part-time participant on tour, has re-energized the reigning series champ and his Capco Contractors team in advance of the upcoming Countdown to the Championship.

After beating Schumacher in the final round two weeks ago at Brainerd, Minn., ending the second longest winless streak of his pro career, Torrence acknowledged the eight-time former champion’s impact.

“I enjoy racing Tony more than anyone,” he said, “(because) he makes you bring out your ‘A Game’ every time (you race him).  He’s a self-proclaimed machine.  He does the same thing time and time again.  He’s competitive and he’s good because he’s been in big situations so many times and dealt with the pressure.

“He’s been in the money round; he’s been in the championship round,” Torrence enthused.  “He’s done it all and I think he just brings out the best in me and in this team.  I like to race him.”

Indeed, Schumacher does seem to elevate the performance of the 39-year-old Torrence who is one of the few drivers to have forged a winning record against the 86-time tour winner.  The Capco driver has prevailed in 23 of 42 career meetings, beat Schumacher for his first pro win (at Atlanta in 2012) and is 7-2 in final round matches.

Of course, Schumacher still reigns as the unquestioned “King of Indy,” having won the U.S. Nationals a record 10 times, but Torrence realistically can make a case for himself as the “new sheriff” at Lucas Oil Indianapolis Raceway Park.

In addition to winning a year ago when he beat Force in the final round, the talented Texan has driven his Capco hybrid into the final round five times in the last nine editions of The Big Go with a win in 2017 when he also won the Traxxas Nitro Shootout, a double-up success he hopes to duplicate this year with the debut of the Pep Boys All-Star Callout.

The 39-year-old cancer survivor also won Indy in 2005 in Top Alcohol Dragster (on his way to a championship) and, in 2020, won one of the three special IRP events contested during the COVID-19 pandemic.

Because the U.S. Nationals pays one-and-a-half times as many points as other events, Torrence conceivably still could win a fifth straight regular season championship although that would require an early exit by Force, whom he will trail by 130 points when qualifying begins with a single session at 6:30 p.m., Texas time, on Friday.

Nevertheless, the regular season title is not really on his radar.  The prize on which he is focused is the Camping World tour championship that would place him in the company of Schumacher, John Force and Bob Glidden as the only drivers to have won as many as five straight NHRA pro titles.

“We haven’t been the dominant car all season,” Torrence has said, “but we’re trying to see if we can be the dominant car the last six races” as they were in 2018 when they swept the six playoff races en route to a first Top Fuel championship.

Regardless of what occurs in Monday’s eliminations, everyone’s points will be adjusted at the conclusion of the event so that just 10 points separate the drivers in positions two through 10.  The regular season champ will start with a 20-point lead.

Among those not concerned about the points before or after their adjustment is Billy Torrence who, for the second straight event, will race alongside his son in a second Capco Contractors entry.

Making only his fifth appearance of the current season, the elder Torrence, founder and CEO of Capco Contractors, will be trying to go a step further than he did in 2019 when he lost in the final round of the U.S. Nationals to Doug Kalitta.  Like his son, he also won one of the COVID special events in 2020.

Race coverage starts at 11 a.m., Texas time, Monday on FS1 before moving to the FOX broadcast network for three hours starting at 1 p.m.