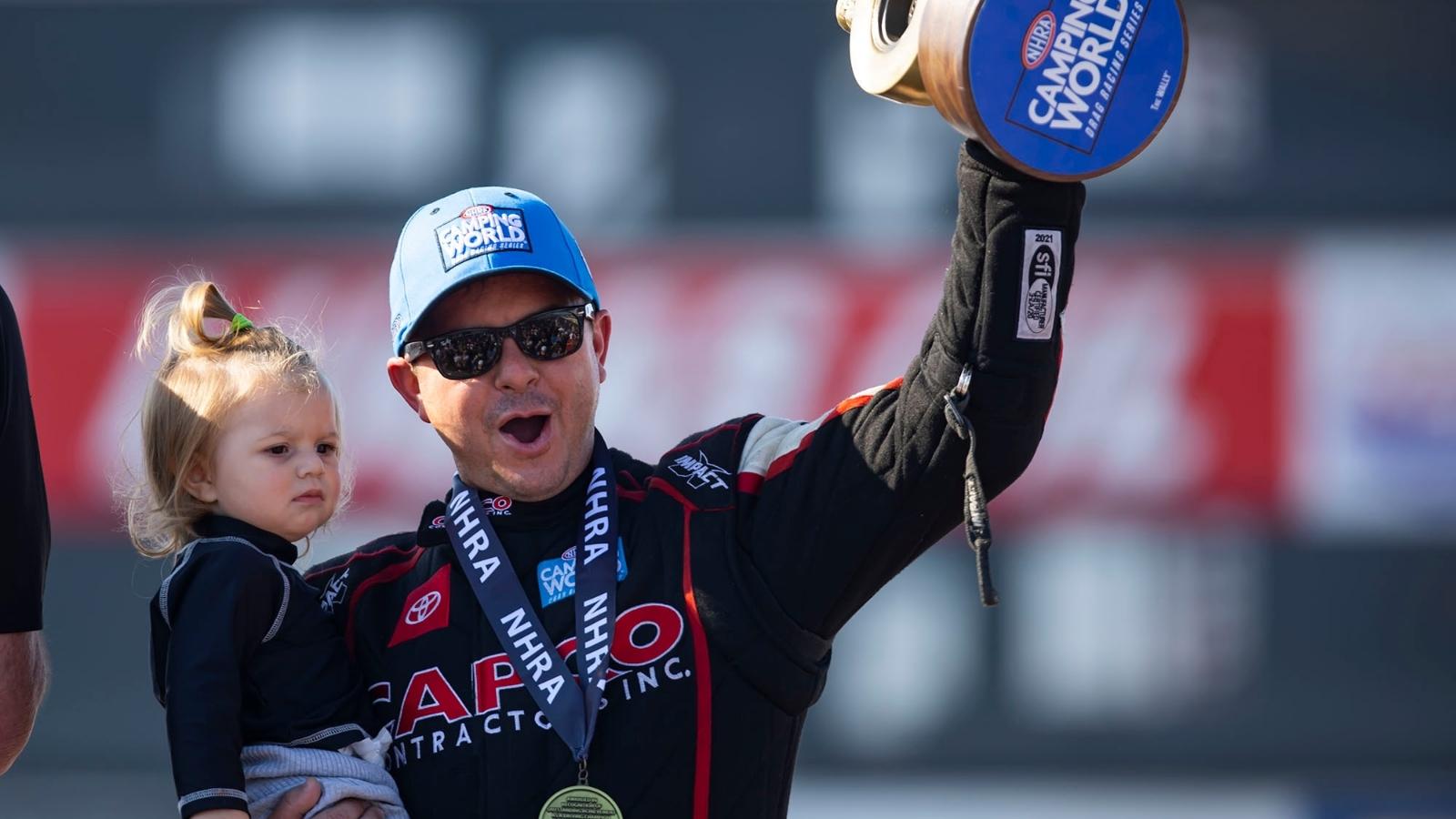 Nine months after he last hoisted the winner’s trophy at a Camping World tour event, Steve Torrence brought an end to the second longest victory drought of his NHRA pro career Sunday by driving his Capco Contractors Top Fuel dragster past Tony Schumacher and into the winners’ circle at the 40th annual Lucas Oil Nationals at Brainerd International Raceway.

It wasn’t the prettiest of the Texan’s 52 career wins, but it may have been among the most satisfying, especially since he beat Tony Schumacher in a final round showdown between two of the most dominant drivers in Top Fuel history.

It was the four-time reigning champion’s second straight win at BIR and it propelled him past Justin Ashley and into third place in driver points just one race before points are adjusted for the start of the Countdown to the Championship in which he will be bidding for his fifth consecutive series championship.

“We knew that if we kept putting ourselves in position that eventually we’d get another one of these little gold men to take back home to Kilgore,” Torrence sai, referring to the NHRA winner’s trophy.  “It’s amazing.  You get used to winning and then you have a year like this one and it puts everything in perspective.

“It’s not easy to win out here,” he said.  “It’s hard, but there’s nobody I’d rather be fighting the battle with than these Capco boys.  They stuck with it and now it looks like maybe we’re peaking at just the right time.  I can’t wait to get into the Countdown and see if we can hurt some feelings.  It’s gonna be fun.”

It was the second final round in as many weeks for Torrence, who avenged last week’s loss to Antron Brown at Topeka, Kan., by winning a second round pedalfest with the three-time former champ on as crew chiefs struggled to deal with unusual atmospheric conditions that made every run an adventure.

Traction was an issue all day long as evidenced by Torrence’s winning times of 4.945 and 5.400 in rounds two and three, the latter good enough to get him past No. 1 qualifier and point leader Brittany Force.  In the final, he powered his Capco entry past Schumacher’s Okuma dragster with a solid, if not spectacular, 3.866 at 322.04 mph.

Of the traction issues, Torrence said that for a driver, patience is the key.

“When it starts smoking the tires, you have to let it settle down before you get back in the throttle,” he said, “and that’s very hard to do.  Your first instinct is to jump back on the gas.  I’m just glad I was able to do my job a couple rounds to give Hoagie (Richard Hogan) and Bobby (Lagana Jr.) a chance to figure it out for the final.”

It was Torrence’s ninth win in 11 final round meetings with Schumacher, the eight-time series champion who returned to full-time competition this season after racing an abbreviated schedule the last two seasons.

The win was the third in the last four Brainerd races for Team Capco which won in 2018 with Billy Torrence, the founder and CEO of Capco Contractors, who made the most Sunday of just his fourth appearance of the season by beating Austin Prock for his 100th round win in Top Fuel.