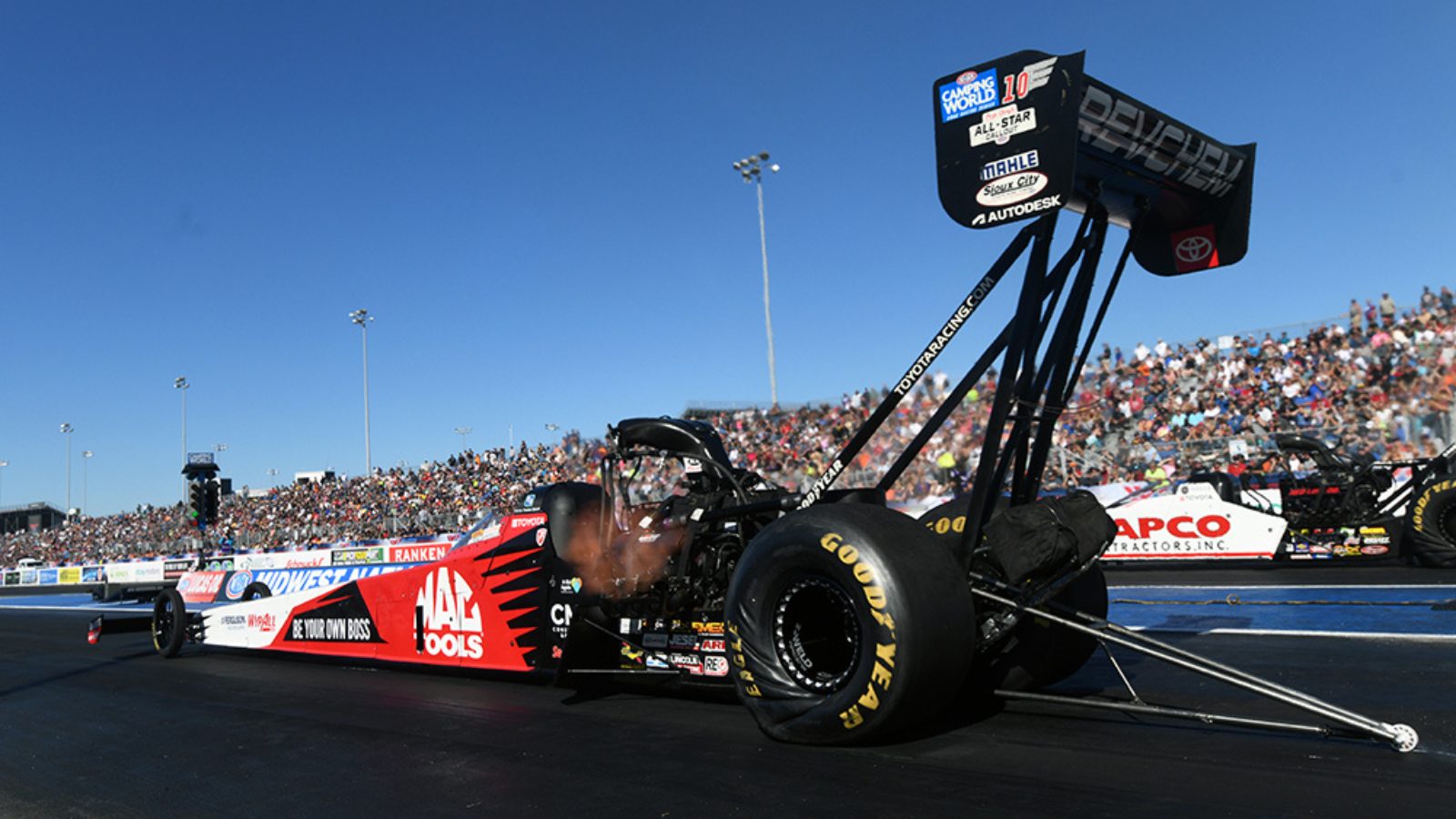 For the second week in a row Doug Kalitta and the Mac Tools Toyota Top Fuel dragster stormed through the Top Fuel field in qualifying and on race day. After two days of nearly 20 Top Fuel dragsters battling for 16 spots in the field Kalitta secured the No. 4 spot on the strength of his 3.684 second pass. In a strong field that featured seven teams posting run in the 3.60s to set the field Kalitta and the Mac Tools team featuring Ferguson and WypAll knew race day was going to be a tough battle.

A first round race with veteran Doug Foley was no easy race for the 49-time Top Fuel national event winner. Kalitta grabbed a starting line advantage and just past half track his Mac Tools dragster began to haze the tire robbing the perennial championship contender of much needed horsepower, but he was far enough in front of Foley who was having his own issues to grab the win. Kalitta stayed on the throttle and muscled his race car across the finish line for the win.

In the quarterfinals Kalitta had a chance to take out a Countdown contender and start closing the gap on the handful of cars in front of him in the points. He grabbed a starting line advantage with a .055 reaction time in front of Brittany Force’s .079 and he never trailed in the race. His 3.768 second run outran Force’s slower 3.833 second run and moved him into the semifinals for the second consecutive race and fourth time this season.

“That run was awesome,” said Kalitta from the top end. “We have been qualifying good. We are just giving a great effort right now. Obviously, this place is packed and I love running here in St. Louis. Our Mac Tools Toyota guys will keep digging. That was a big win.”

For the first time in 2022 Kalitta ran into reigning champion Steve Torrence in eliminations. The Mac Tools dragster got the jump off the starting line and just past half track it drove into tire smoke. Kalitta worked to get it back under power to hold off Torrence but just before the finish line the blower belt let go and Torrence moved around him to advance to the final.

“This was another step in the right direction for this Mac Tools team,” said Kalitta. “We are seeing the performance numbers that will win us races. I have a lot of confidence and I can’t wait to get back to the track in a couple weeks. We won a couple rounds for Feeding America so that was cool.”

Kalitta’s two round wins combined with teammate Shawn Langdon’s two wins and J.R. Todd’s win light meant that 100,000 meals were donated today to Feeding America by Kalitta Motorsports and DHL. After two races of the four-race program the three drivers have combined to donate 140,000 meals. The next chance for Feeding America to receive meals will be in two weeks during the Texas NHRA Fall Nationals at Texas Motorplex.