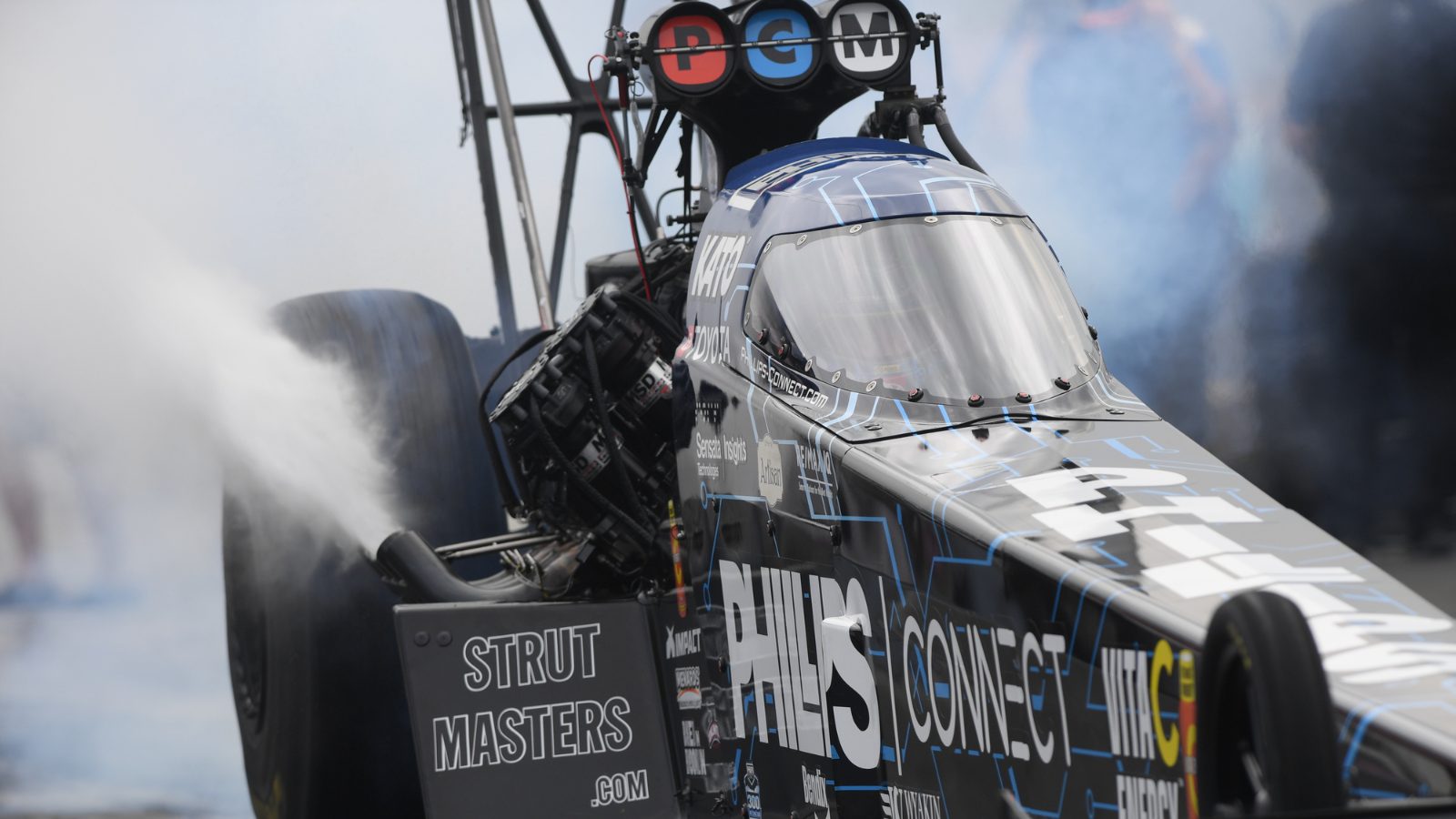 For the fourth national event in a row Justin Ashley drove the Phillips Connect Toyota Top Fuel dragster powered by Vita C Energy to a semifinal finish. The 2020 NHRA Rookie of the Year moved up to third place in the Camping World Drag Racing Series as the sixteen race regular ended today at the 68th NHRA U.S. Nationals at Indianapolis Raceway Park, formerly Lucas Oil Raceway. As the No. 2 qualifier Ashley started his day with wins over Shawn Langdon and Billy Torrence before dropping a close race to eventual winner Toyota teammate Antron Brown.

“I thought we had a great weekend,” said Ashley, a two-time 2022 national event winner. “This was my first U.S. Nationals in full force with the potential for five qualifying sessions and racing on Monday. It was a long weekend with a lot happening on and off the track, the most important moment this weekend was the announcement of our extension with Phillips Connect.”

On Friday in a mid-afternoon press conference Phillips Connect announced a multi-year extension with Justin Ashley Racing and Davis Motorsports. The marketing partnership began as a three-race program at the beginning of the season and was quickly extended to the full season after Ashley won the season opening NHRA Winternationals. The extension solidifies one of the hottest teams in the NHRA for the foreseeable future. Phillips Connect and Vita C Energy lead a dynamic group of marketing partners such as Bendix, Velociti, Sensata Insights, Lucas Oil, and KATO Fastening Systems.

“I am so grateful we have an opportunity to keep working with Phillips Connect,” said Ashley. “The Phillips Connect Toyota Vita C Energy race car ran great and we just came up a little short in a really close drag race in the semifinals. I am proud of this team. Throughout the whole weekend they worked extraordinarily hard. (Crew chiefs) Mike Green and Tommy DeLago were awesome. Heading into the Countdown we have a really good race car.”

In the opening round Ashley faced one of the toughest drivers in the series, 2013 Top Fuel world champion Shawn Langdon. Each of these drivers are amongst the leaders in the category for reaction time advantage. Both dragsters launched together and it was Ashley taking the lead shortly after the cars eclipsed 100 miles per hour on their way to the finish line at over 330 miles per hour. Ashley made the quickest run of the first round, a 3.690 second pass at 331.85 mph to get the win and improve his first round win record to 8-1 over the last nine races.

“This is the U.S. Nationals. It doesn’t get any bigger and it doesn’t get any badder than this,” said Ashley. “Part of my obligation to this team is to leave the starting line as quickly as I can. That is super important. It isn’t an ego thing. It is about putting our team in the best position to win because the way the field is set up now these races are decided by such close margins. They give me a safe and fast race car. I have a responsibility to deliver on the starting line. I feel good about how I performed this weekend but there are still a lot of things I can learn from. I am going to continue to learn and improve.”

In the quarterfinals Ashley met Billy Torrence, half of the Torrence Racing operation, which is also backed by Toyota and boasts four-time and reigning Top Fuel world champion Steve Torrence. Ashley took a starting line advantage and never trailed in the drag race. Once again, his Phillips Connect Toyota dragster was quickest of the session and the victory set up a head-to-head battle with Toyota teammate and technical alliance partner Antron Brown.

Racing for his fifth final of the season Ashley was amped up on the starting line and took a reaction time advantage off the starting line. As his dragster crossed half-track it appeared to start mixing up cylinders robbing him of much needed power for the home stretch to the finish line. Brown drove around Ashley at the stripe with his quickest pass of the weekend. While the pass ended Ashley day the third year pro quickly shifted his attention to the Countdown and the potential for his first championship.

“I am excited about the Countdown. Last year was my first experience in a Countdown and I think that experience will bode well for our team moving forward,” said Ashley, who finished 2021 in fourth place in Top Fuel. “We wanted to go into the Countdown in first place like everyone else, but we also really wanted to be in a solid position to make a run at the championship if we weren’t No. 1. Coming into the playoffs in third place is a good spot but what I learned about the Countdown is the margin for error is so small. Every team out here is running well and we have to be on our A Game week in and week out. It is six races that is still a marathon not a sprint. We have to do our best on this back part of the year.”