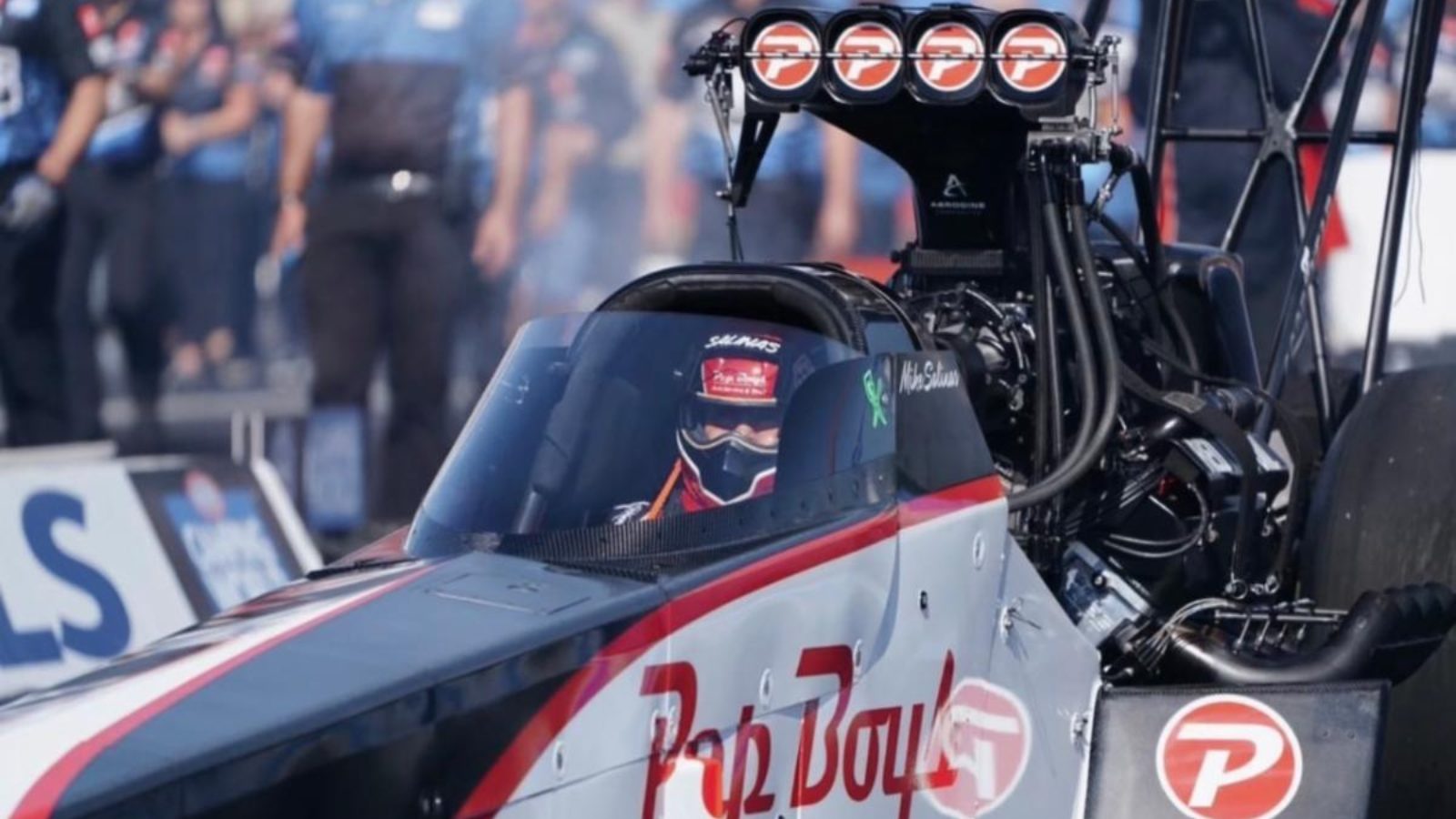 With an uncharacteristic first round exit, Top Fuel standout Mike Salinas saw his chances for the NHRA Camping World Drag Racing Series championship go up in smoke – tire smoke, to be exact. M. Salinas is one of three championship contenders who struggled to make it down the track today during the first round of eliminations at the Auto Club NHRA Finals at Auto Club Raceway at Pomona.

The Scrappers Racing team lived up to their name at the final event of the 2022 NHRA season. M. Salinas and his daughters, Jianna Evaristo and Jasmine Salinas, were all smiles this morning before driver introductions. Each driver feels proud of the hard work and dedication they’ve given to the sport they love, all season long. Entering the final event of the season, each driver has been on a journey full of ups and downs. Overall, they’ve each experienced one of the most challenging but fulfilling seasons of their careers.

Team owner and driver M. Salinas has been in the championship conversation all season long, with more wins this season than all of his previous Top Fuel seasons combined. Some questioned how competitive he would be as he brought on a new Crew Chief duo – Rob Flynn and Aaron Cave – and typically a transition like that has to go through a bit of an adjustment period as the team pivots. In this case, however, the team seemed to gel quickly and M. Salinas’s Pep Boys/Scrappers Racing Top Fuel dragster has been a competitive force all season long.

M. Salinas entered race day from the No. 3 qualifier position thanks to a powerful pass of 3.666-seconds at 331.45 mph. He faced Top Fuel up-and-comer Krista Baldwin but smoked the tires off the starting line forcing him to lift and concede the round win to Baldwin. His fellow championship contenders, Justin Ashley and Steve Torrence experienced similar fates as the competitive Top Fuel field featured a number of upsets as multiple machines went up in tire smoke after launch.

“We learned that NHRA officials scraped the track late last night,” said M. Salinas. “It was definitely different this morning and there were a lot of people who didn’t get down the track. It’s unfortunate because we always want to have at least a shot at having a solid drag race. But at the same time, that’s what I love about drag racing. It doesn’t matter who you are or what you’re worth, when you drag your stuff up there, all bets are off. It’s always a roll of the dice. This one didn’t work out for us but I’ve had the best year of my racing career. The good part is that all year, we’ve only hurt two motors. This team is incredible. Everything will go back and we will start getting ready for next year.”

After experiencing a serious crash on her Pro Stock Motorcycle in testing early this year, Evaristo got a bit of a late start this season, putting her out of Countdown contention. But that did not shake her focus as she came back in signature Scrappers style, excited to enjoy every moment on her Pep Boys/Scrappers Racing Suzuki as she worked hard to improve and become more comfortable on the bike.

“This season, I’ve really been focused on the particulars,” said Evaristo. “I’m learning every time I get on that bike and my teammates, Matt and Angie Smith, have been amazing as they patiently help me improve and really take advantage of each driving experience I get. I’m feeling more confident on this bike than I ever have before and it’s just made me even more resolved in the understanding that this is where I’m supposed to be and this is what I’m supposed to be doing.”

NHRA Lucas Oil Drag Racing Series Top Alcohol Dragster pilot Jasmine Salinas finished out her season on a high note in terms of personal victories. After qualifying No. 9 with a pass of 5.251 at 278.63, the newly crowned North Central Region Top Alcohol Dragster champion defeated Jackie Fricke in the first round of eliminations. Her season came to an end when Madison Payne bested her in the second round of the day. Although she went out in the quarterfinals, her reaction times were markedly improved, giving the rising star a boost of encouragement as she sets her sites on the 2023 season.

“While a national series title would have been absolutely amazing, I’m really happy with everything we’ve accomplished this season,” said J. Salinas. “I’ve learned a lot and it’s never lost on me what a privilege it is to get to drive this powerful dragster. I’m so grateful for all of our sponsors and fans that have supported us and encouraged us all season long. I love racing in this category and I’m already eager to get back out on the track next year.”