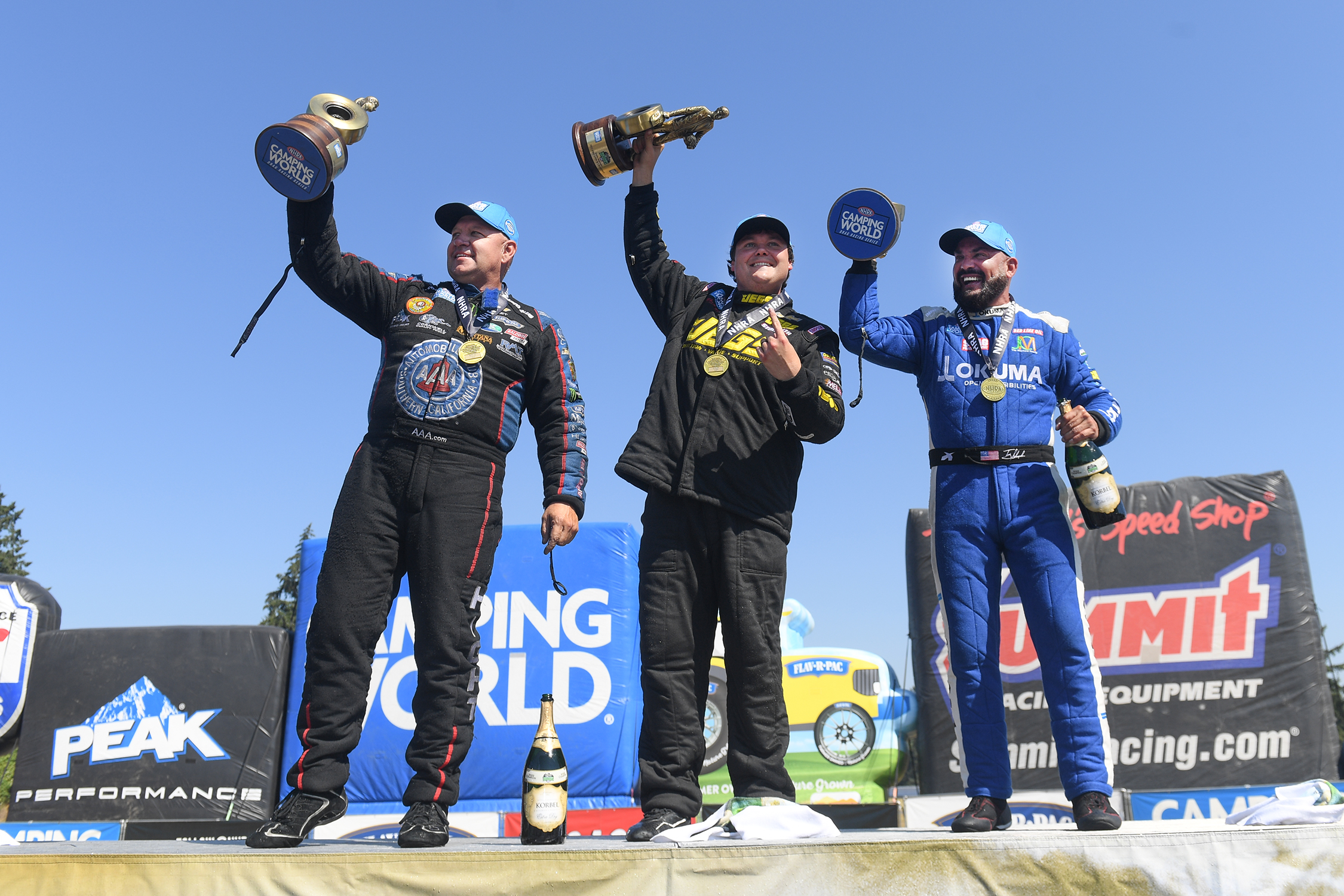 Schumacher held off points leader Brittany Force in the final round, going 3.977-seconds at 251.34 mph in his 11,000-horsepower Okuma dragster. It gave the longtime standout his fifth Seattle victory – and his first at Pacific Raceways since 2008 – and also the first win for Joe and Cathi Maynard, who became majority team owners last week. His 86th career win surpasses Bob Glidden for the fourth-most in NHRA history as Schumacher and his team have fully rebounded from a slow start this year. He beat Scott Palmer, Shawn Langdon, and then Justin Ashley in a wild pedalfest to reach the finals, where he outlasted Force to tie Joe Amato for the most Top Fuel wins at Pacific Raceways in NHRA history.

“This is fantastic,” Schumacher said. “We were having a tough time this year, but we dug deep, worked hard, and made some big changes. Joe and Cathi are a great group of people and when good stuff happens, it’s a beautiful thing. It’s good for my guys, it’s good for Joe and Cathi and this is cool stuff. You’ve got to perform in this class, and these are not easy to win. To have five here in Seattle is phenomenal and we all felt good coming here this weekend.”

Force advanced to her fifth final round this season and 33rd in her career with wins against Jim Maroney, Josh Hart, and Leah Pruett. The standout also set the track speed record on Sunday with a run of 332.43 and stretched her points lead to 71 points over Mike Salinas.

Hight wrapped up a nearly-perfect Western Swing with another spectacular Sunday performance, delivering a stellar 3.975 at 319.98 in his 11,000-horsepower Auto Club Chevrolet Camaro SS to slip past J.R. Todd in the final round. It gives the Funny Car points leader his sixth win this season and 59th in his career and a great finish to a Western Swing that included two victories and a semifinal appearance. Hight made the quickest run in each round of eliminations as he knocked off defending world champ Ron Capps, Alexis DeJoria, and John Force to reach the final round. He led wire-to-wire against Todd en route to his second career victory at Seattle.

“We weren’t the best car in qualifying, but we had to be on our game today,” Hight said. “We had low E.T. every round and that’s big. We’ve been good when the conditions were good, so I’m proud of what these guys did in the heat. It’s amazing to have six wins at this point in the season. I love it here in Seattle and it was great to be back, and we capitalized when we needed to. Everyone is pulling in the same direction on all of our teams and as a driver, that gives you a lot of confidence. We’re very hopeful we can keep this going, but we just have to continue to stay focused and keep working toward our goal.”

Todd broke through with his first final round of the season, knocking off Blake Alexander and No. 1 qualifier Bob Tasca III. It’s his 41st career finals appearance. Hight’s points lead now stands at 228 points over Matt Hagan.

Coughlin Jr. broke through in a major way on Sunday in Pro Stock, getting his first career win as a professional, going 6.638 at 208.68 in his JEGS.com/Elite Motorsports Chevrolet Camaro in the final round to slip past teammate and points leader Erica Enders. After struggling early in the season, Coughlin and his team have come on strong as of late, hitting a major accomplishment in Seattle. He knocked off Fernando Cuadra, rookie Camrie Caruso and defending world champion Greg Anderson, who also qualified No. 1, to reach the final round against Enders. Both had solid reaction times, but Coughlin chased her down in his fourth career final round.

“All the credit in the world goes to this entire team and everyone at Elite Motorsports,” Coughlin said. “To have that many good runs in the heat is extremely difficult and impressive to do. What an honor to win today and I’m tickled to death. The car is phenomenal and a blast to drive, and I’m the luckiest kid in the pits. When the morale is up the car just starts to work. This team is gaining momentum and I’m excited to get to Topeka.”

Enders maintained her dominance in the class, advancing to her eighth final round in 2022 and the 69th in her career. She beat Chris McGaha, area native Dallas Glenn, and teammate Aaron Stanfield to reach the championship round, extending her points lead to 103 points over Stanfield in the process.