Following the drama-filled Summit Racing Equipment NHRA Southern Nationals there’s no shortage of storylines, but for Danny Rowe (above) and Steve Matusek, drivers of the popular Agave Underground Pro Mod Camaros, the primary takeaway is simple: this NHRA Pro Mod Drag Racing Series is going to be a dog fight from start to finish.

After qualifying 4th and 11th with 5.872-second, 247.29mph and 5.937-second, 246.44mph passes, respectively, Rowe and Matusek embarked on their march toward the money round. In a marquee matchup on Saturday evening, Rowe squared off with the most recent event winner, Mike Janis, in an all-supercharger showdown with serious implications in the championship points chase. Rowe was off the line first and never trailed, though, posting a stunning 5.832-second, 249.12mph performance to move onto the quarterfinal round of action. 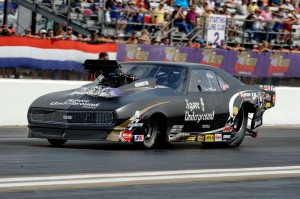 Matusek, clearly becoming increasingly comfortable behind the wheel of his new supercharged ride, streaked to a career-best 5.896-second elapsed time in his first round matchup with Pete Farber, easily dismissing the Massachusetts native.

While Matusek’s good fortune ran out in the second round when his Agave Underground hot rod got up on the tires and headed left against turbocharged hitter Kevin Fiscus, Rowe continued moving forward, taking out Steven Whiteley with a 5.871/247.88mph combination to advance to the semifinal round for the third straight race.

Facing reigning NHRA Pro Mod world champion Rickie Smith, who had set the racing world a buzz earlier in the weekend with a track record-setting 5.778-second blast in his nitrous oxide-injected Camaro, Rowe took a decided three-hundredths-of-a-second advantage off the starting line, but couldn’t hold off Smith after his Agave Underground Camaro quivered the tires at half-track.

“There’s probably nobody out here we’d rather beat than Rickie,” admits Rowe, who’s head-to-head record with Smith fell to 3-2 after Atlanta. “I think Jimmy [Rector, crew chief] had something for him in the semis. We had him on the ‘tree, but it shook a little out there – we had him until right at the eighth-mile. That’s the kind of thing that happens when you’re getting after it, though, and we’re just happy to be continuing to creep up in the points and be in the thick of things. This class is tougher than ever – we had our third straight 16-car field in the 5.90s – and it doesn’t look like it’s going to do anything other than get more competitive at each race. We’re going rounds on race day and that’s always the goal. We’re focused on Englishtown now – a track where we have had a lot of luck over the years – and we’ll hope we can keep that streak alive in 2014.”

“Even though it may not look like we’ve made improvements, we’ve definitely advanced as a team,” he says. “We’re three races into the season – amongst inarguably the most competitive field of Pro Mods ever assembled – and we’ve established ourselves as a serious contender. That’s something I know that I’m proud of, and I hope the rest of the guys feel the same way.

“Monday morning we had the misfortune of the car picking up the frontend and going left, but like we’ve all talked, that’s what happens when you’re getting after it,” continues Matusek. “We lived to race another day. Three races in and Danny’s 3rd in points, four rounds of first and we’re six – life is good.”

Next up for the Agave Underground Tequila Pro Mod team is the NHRA Supernationals at Old Bridge Township Raceway Park in Englishtown, New Jersey starting May 30th.