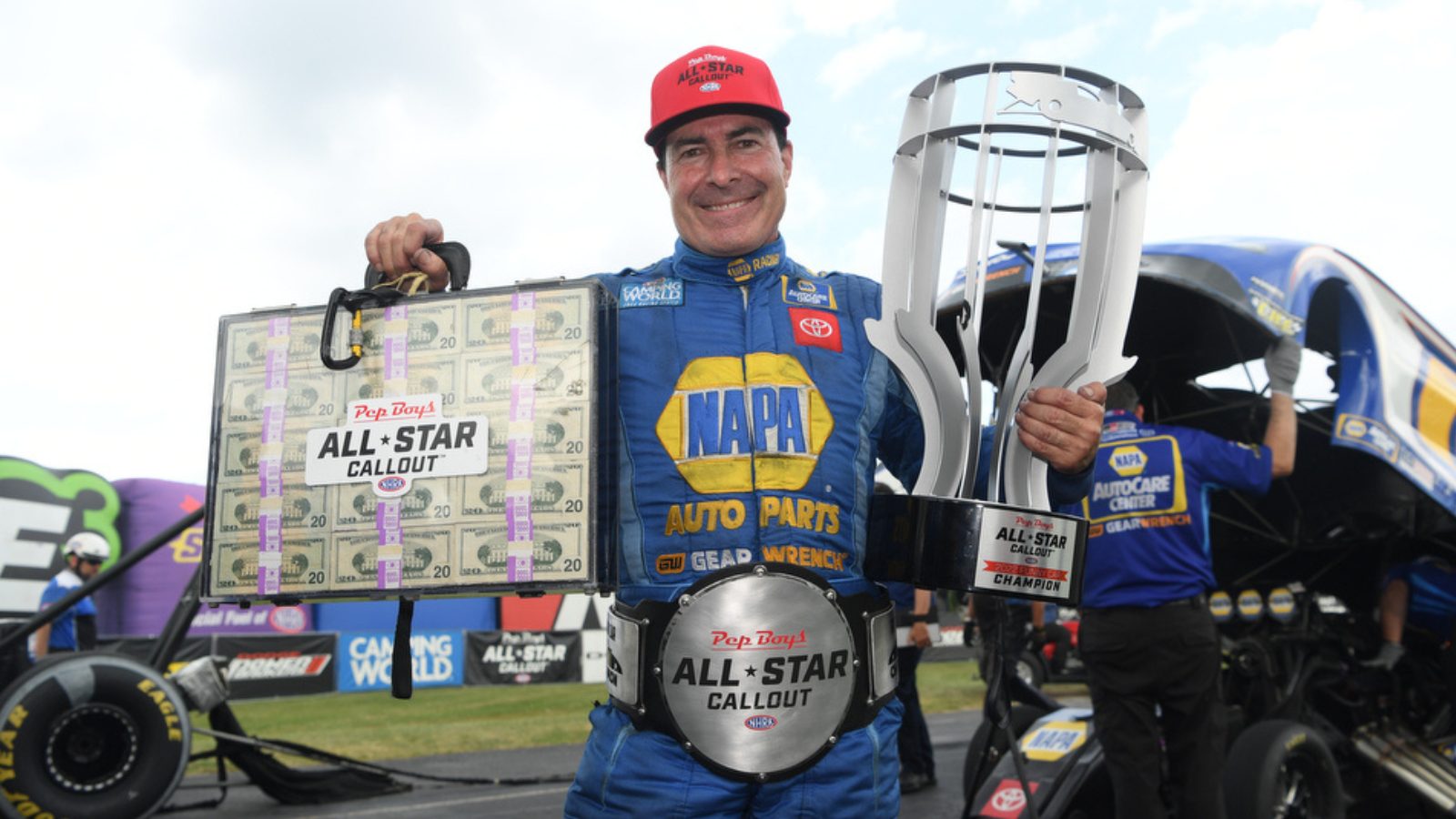 In addition to securing his first NHRA U.S. Nationals Funny Car pole, Ron Capps defeated Matt Hagan in the final round of the inaugural Pep Boys All-Star Call Out race on Sunday evening at Indianapolis Raceway Park. Aboard the NAPA AutoCare Toyota GR Supra, Capps clocked a 3.936-second at 330.47-mph pass to outpace Hagan and claim the $80,000 cash prize.

The unique ‘call out’ element of the All-Star race allowed Capps, the No. 2 seed, to select his first-round opponent, and Capps made no bones about why he chose to line up against Tim Wilkerson in round one.

“The choice was simple. I wanted revenge, and Guido (Dean Antonelli) and (John) Medlen, and our entire NAPA AutoCare team wanted revenge,” said Capps, referring to last year’s U.S. Nationals final round showdown when Wilkerson laid down a monster run to defeat Capps, denying the defending Camping World series champion of his first Big Go win. “Timmy is one of my favorite people out here. He’s one of those ‘throwback racers.’ Tunes his car, owns his own team, he’s a NAPA AutoCare Center owner, so we share that connection, and he was a big help to me over the off-season. That being said, I believe his final-round pass was the ‘run of the year’ last year. That throw-down run in the final round, snatching that U.S. Nationals win away from our team, it hurt; it still stings, so yeah, we were gunning for him.”

Against Wilkerson, Capps took his NAPA Supra on a blistering 3.864-second at 333.58-mph ride to launch to the top of the timing sheets while defeating his opponent in the process. By clocking low E.T. of the round, Capps had the benefit of, once again, selecting his next competitor. The two-time world champ chose to race John Force, the only other Funny Car pilot in the history of the sport to have more wins than Capps, and used a 3.896 E.T. to send Force to the trailer. In addition to posting his fifth consecutive three-second pass to defeat Hagan in the All-Star Call Out final round during Q5, Capps was also able to maintain his position at the top of the Funny Car pack, earning his first U.S. Nationals No. 1 qualifier award, his fifth of the year, and 34th overall.

“This briefcase, man. Pep Boys, thank you for doing this. Guido, Medlen, my guys, this money goes to them. That second round, that 3.86, that really stands out. I knew it was on a pretty good run, the clutch came in and it planted me in the trunk of that Supra. I knew it was going to be decent, but I had no idea we were going to run an .86 in those conditions. That was big, this win is huge for our Ron Capps Motorsports organization, and all of our partners who make it so that we can do this.

“To earn the pole, that’s great going into tomorrow to know that we have it and know we have lane choice, but it’s just another day. I’ve been hearing from years from the media ‘when are you going to win the U.S. Nationals?’ and it’s getting monotonous. I’ve got such a great race car right now, but I’ve learned not to get ahead of myself, especially here, and last year was a perfect example of that. We’ll celebrate these wins tonight and get ready for tomorrow.”

The two-time event runner-up earned a total of eleven bonus points over the course of the weekend for his impressive qualifying performance and will square off against Dale Creasy Jr. in round one as he makes a bid for his first NHRA U.S. Nationals Wally trophy on Monday, and Ron Capps Motorsports’ third national event win.